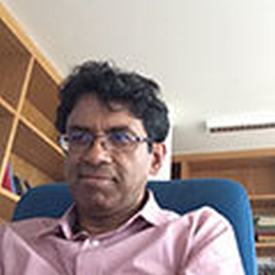 The novel Covid-19 is affecting the advanced countries in the Western Hemisphere disproportionately more than developing countries. In this post, Basu and Sen show that Covid-19 casualty is higher in countries where there is a large ageing population, and therefore question whether a draconian lockdown is a practical policy going forward for India, where the proportion of elderly population is low.

The death toll from Covid-19 has reached a staggering amount: 209 countries and territories across the globe have so far reported 88,543 deaths and 1,519,442 confirmed cases. Among the affected countries, Italy is the highest on the list (17,669 deaths so far and 1,39,422 confirmed cases, as on 9 April 2020). Next to Italy are Spain and the US where the death tolls are 14,792 and 14,797, respectively on 9 April. The Economist magazine cautions that these are underestimates of the actual fatalities. What is interesting is that the fatality rate is astonishingly high in advanced Western European countries and the US. The developing countries are getting affected, but the incidence of fatalities is far less so far. One may argue that the Covid-19 has not yet peaked in developing countries. Given this caveat, one may still question why the Covid-19 virus spread to the Western world so quickly. One popular explanation is that the Wuhan region in China has strong trade ties with Italy and Iran, which triggered the pandemic in both countries. While we agree with this point, the question remains why the virus spread so rapidly from Italy to the rest of Europe and UK, leading to a high number of deaths. Just tourism and movement of people alone cannot explain this.

In this piece, we are not going to debate on the right approach to combat this pandemic because we still do not have enough data for this. We are more intrigued by the fact that the novel Covid-19 is affecting the advanced countries in the Western Hemisphere with low population density. People in these advanced countries respect personal space relatively more, and interpersonal contacts are likely to be lower in these countries than in developing countries. Advanced countries also have better public health facilities than many developing countries, notwithstanding the fact that Covid-19 is caused by a novel Coronavirus. 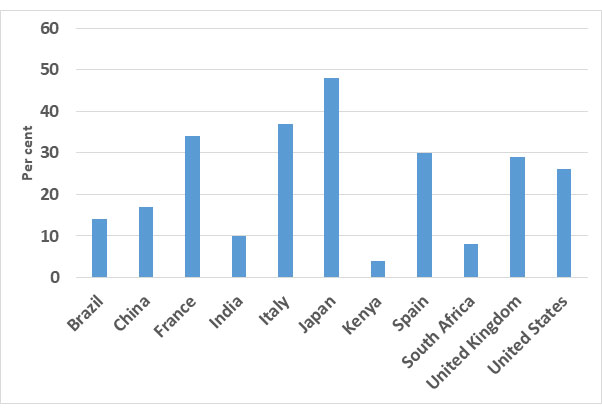 We then associate the incidence of Covid-19 and the fatality rates across the globe, with the elderly dependency ratio, which is a reasonable proxy for the age composition of the population. Figures 2 and 3 show the scatter plots of the elderly dependency ratio against the number of reported cases of infections and number of deaths. The correlation coefficients1 are 0.53 and 0.44 respectively which are both significant at the 1% level2. The sample of countries is restricted to 181.3 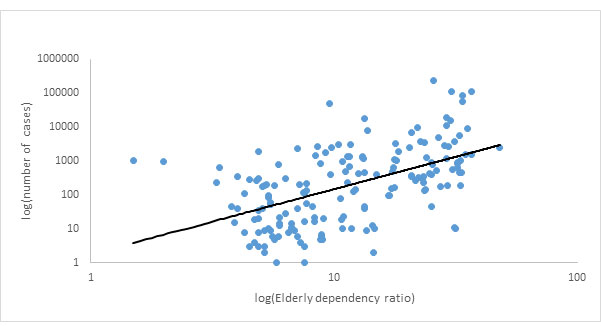 Figure 3. Elderly dependency ratio and deaths due to Covid-19 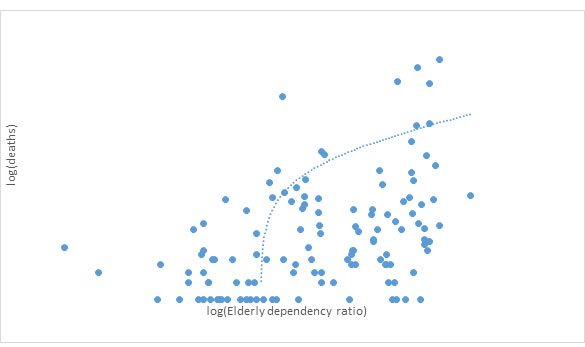 These correlations are striking. It seems that the age profile of Covid-19 mortality is quite opposite to that of the 1918 Spanish flu pandemic where young working age adults were mostly the victims (Bell and Lewis 2004). Covid-19 casualty is higher in those countries where we already have an ageing population, with older people more likely to require hospitalisation and subsequently die from infection (Imperial College COVID-19 Response Team, 2020). Without making any value judgement or underplaying the severity of the fatalities in these countries, one can still question whether a draconian lockdown is a practical policy for India where the elderly dependency ratio is lower.

Debraj Ray and S. Subramanian propose a restricted shutdown where young workers who pass an official anti-body test are allowed to work, while households are left with their own self-selection mechanism to prevent the spread of infections in the family. We find this approach more pragmatic after the initial 21-day shutdown period in India, when the rate of transmission is likely to decline. In addition, one should also administer anti-body tests selectively in slum areas of India where the population is dense. While one may question whether such mass testing is possible in a short time, it should be kept in mind that the Indian State successfully conducts a house-to-house Census every 10 years. Given that the elderly population is more vulnerable, perhaps the tests should be focused more on households with elderly members, where young adults aged 20 to 40 years in the household may be able to return to work if they have passed anti-body tests satisfactorily.

It is of course true that the battle against Covid-19 will be far from over after this. The medical research has to go a long way to find suitable vaccinations. It will be imperative to find clusters where there are a high number of infection rates, seal them off from the rest of the population, and ensure enough supplies to reach these sequestered communities. The government has already implemented this in Rajasthan with partial success. We also need to simultaneously increase the awareness in the community about the importance of social distancing.