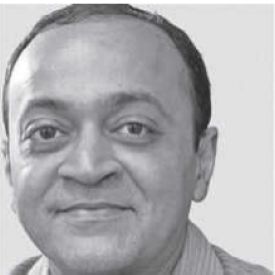 The Goods and Services Tax (GST) Council met in Goa in September 2019 to find a way to boost the weakening Indian economy. The Council recommended reductions in GST rates for certain categories of goods and services. In this post, Abheek Barman contends that the answer is to overhaul the GST totally, and discusses how the government can go about this.

“Abheek Barman was a leading voice that many turned to when they wanted to closely follow India’s economy – its troubles, prospects and hopes. His column in the Economic Times, called Folk Theorem, has long been a source of information and witty insight for its readers. Abheek wielded his pen like a scalpel, cutting through to the heart of complex issues with just a few strokes. He was unafraid of speaking truth to power, or going against conventional wisdom, but he never descended into being a cheap polemicist. Everything he wrote stood firmly on facts and logic.

To those who knew him personally, Abheek was one of a kind. He was a raconteur’s raconteur, a flamboyant narrator of outrageous tales, a man to whom the life of the party went for life lessons. A voracious reader, splendid cook, wildlife enthusiast and passionate football fan – the multiple facets of his personality made him a true conversation artist. Educated in Presidency College and the Delhi School of Economics, Abheek, no less than many illustrious peers, has made those institutions proud.

Abheek Barman’s untimely death on November 10 will leave a big hole in Indian journalism as well as the lives of those whom he touched. He will be missed.”

What on Earth could a European politician who died 336 years ago, teach 21st century economic ministers and mandarins? Well, Louis XIV’s minister of finance, Jean-Baptiste Colbert said, “The art of taxation is extracting the maximum feathers from the goose with the minimum amount of hissing.”

Today [20 September 2019], as India’s Finance Minister Nirmala Sitharaman [met] her colleagues from states along with bureaucrats in Goa, Colbert might [have] despair[ed]. There [was] plenty of clucking, squawks, and hissing. The cause for this [was] the goods and services tax (GST) regime, introduced on 1 July 20171.

The idea was that a streamlined GST would replace the unwieldy mess of excise duties, state taxes, octroi, VAT (value-added tax), service tax, cesses and specific duties that had become so unwieldy and chaotic that it threatened manufacturing, trade and transport across states.

It was a good idea, proposed by the Manmohan Singh-led United Progressive Alliance, and steered manfully through the maze of inter-state vested interests and politics by an unlikely chap: Asim Dasgupta, an economist trained at the Massachusetts Institute of Technology (MIT) and long-time communist Finance Minister of West Bengal.

However, by the time it was implemented two years ago, the original two-tier, streamlined thing had morphed into an unrecognisable creature, sprouting five different rates, sometimes with different charges for the same stuff. Why, for example, ask biscuit-makers Parle and Britannia, should their cookies be taxed 18%, while the same stuff made by smaller rivals attract only 12%?

Stuff like bigger cars and cigarettes attract a cess going up to 22% on top of 28% GST, but should soda pop also deserve such treatment? Why is taxation of booze, fuel, and electricity left to the whims of states, instead of being included in the GST regime? Why are uncut gems charged a special rate of 0.25% and gold 3%?

Anyway, the initial shock of this regime travelled through the manufacturing and large retail sectors relatively fast: they could implement accounting software to do GST’s arcane algebra. But its main brunt was felt by small business, kirana2 stores, halwais3, vehicle services, and so on.

So, private consumption, which was a high 62% of GDP (gross domestic product) in January 2017, crashed to 57% by October, three months after GST came in. By July this year, it’s still struggling at under 58% of GDP.

Add to that hazaar4 negative global factors, totally out of our control, now at play. Here’s a sampler: the Sino-US trade war has got more sanguinary each passing week. Now, practically every product and service traded between these giants has higher tariffs than pre-tariff war days.

This has hurt the US economy, whose trade deficit last year was a 10-year high; in contrast, China’s surplus was US$323 billion, a record high. The latter achieved this by hiking tariffs on US goods from 8% to 21%, while cutting it to 6.7% for other nations. But trade wars among giants trample smaller economies too: global supply chains – from software to shipping – are sputtering.

Initially, optimists hoped that India might gain from this conflict: one order less from China or America might mean an additional one to us. But in July, Commerce Minister Piyush Goyal told Parliament that our trade deficit with 25 top transacting nations has actually widened over the last three years. Pop goes that wish-bubble.

Oil on the roil

India buys around 80% of its oil overseas, the single-largest component of our import bill. Between 2015 and 2018, the present regime was lucky as global crude prices remained within a US$30-50 per barrel range, as America stopped importing oil and Iranian crude came to market after decades.

Suddenly things have changed. West Asia, ever-volatile, is boiling. Half of Saudi Arabia’s oil production capacity has been bombed out. Riyadh blames Iran-backed Yemenis for the attack. President Trump, recently attempting to soften his own, earlier hard-line on Iran, might reverse-tweet into muscle-flexing mode. Oil is above US$65 per barrel.

The global economy is slowing. The World Bank says 2019 will close with planetary growth at 2.6%. Its own data show this will be the slowest overall expansion in seven years. India has to pull itself up by its bootstraps.

So, our financial policymakers have to figure what’s the single most effective way of boosting domestic trade, commerce, transport, manufacturing, and investment. The answer, of course, is to overhaul the GST totally. Scrap five rates in favour of two, at say, 3% for stuff like healthcare, social services, processed food, and so on. For everything else, have a single rate of, maybe 15%.

Scrap all cesses and preferential duties. Bring booze, fuel, electricity, bangles, kajal5, alta6, khadi, raw silk, rockets, space payload, locally made aircraft components under GST, at the lower or higher rate. The pan-India average tax on petrol, reckoned in July, was 105%; on diesel about the same. Who would mind these rates being slashed to 15%? Will anybody notice a 3% hike in the price of a bindi7?

India fancies itself a spacefaring nation now. Yes, it is great ‘to boldly go where no man has gone before’. It will feel even better, paying GST before blast-off.

This post has been reproduced from the original version that appeared in The Economic Times, dated 20 September 2019, with permission: https://economictimes.indiatimes.com/news/economy/policy/view-its-time-the-gst-regime-is-totally-overhauled/articleshow/71208428.cms