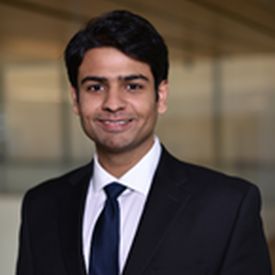 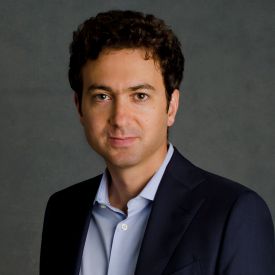 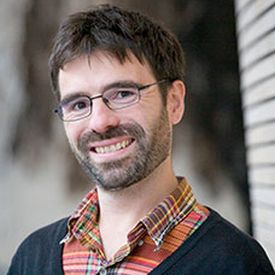 During mid to late 2000s, India expanded mobile phone coverage across rural areas and introduced free-of-charge call centre services for farmers seeking agricultural advice. This article shows that these programmes helped increase the take-up of more advanced technologies and raised productivity of the agricultural sector. However, language barriers in the access of agricultural advice appear to increase disparities among farmers in different areas.

Economists and policymakers have long recognised the existence of large differences in productivity between rich and poor countries. Such differences are most prominent in the agricultural sector, with workers in the richest 10% of countries producing, on average, 50 times more output per worker than those in the poorest 10% (Gollin et al. 2014). A long-held view of such large productivity differences is that it is due to the sluggish adoption of modern technologies among farmers in developing countries (Foster and Rosenzweig 2010). Which factors constrain the adoption of such technologies and how much they matter for the observed differences in productivity, however, is still an open question.

One arguably important factor limiting the adoption of modern agricultural technologies is the lack of timely and reliable information on their existence or how to best use them. As late as 2003, for example, 60% of Indian farmers reported not having access to any source of information on modern technology related to farming practices (National Sample Survey, 2005). In such a context, it is not surprising that the rapid spread of mobile phones in low- and middle-income countries over the past two decades has been hailed as a potential breakthrough in reducing the agricultural productivity gap. By providing timely and reliable information on optimal farming practices, mobile phones indeed have the potential to foster technology adoption and increase productivity in the agricultural sector of developing countries. While several scholars have pointed to the importance of learning and information frictions for adoption of new technologies (for example, Conley and Udry 2010, Munshi 2004), large-scale empirical evidence on the effects of information on agricultural productivity remains elusive.

In recent research (Gupta et al. 2020), we analyse whether access to information can increase adoption of such technologies among farmers in India and increase agricultural productivity. We leverage two programmes launched by the Government of India in the mid-2000s. First, the Shared Mobile Infrastructure Programme (SMIP), which financed the construction of about 7,000 mobile phone towers in previously unconnected rural areas. Second, the Kisan1 Call Centers (KCC), which provide free-of-charge, phone-based agricultural advice to Indian farmers in one of the 22 official languages recognised by the Indian Constitution.

Our empirical analysis combines data on (i) the geographical coordinates of the mobile phone towers constructed under the SMIP, (ii) the evolution of the GSMA (Global System for Mobile Communications) mobile phone network, (iii) the exact content of the about 2.5 million calls made by farmers to KCCs during the period 2007-2012, (iv) the degree of adoption of modern technologies including high-yielding varieties of seeds, fertilisers, and pesticides, (v) measures of agricultural productivity2. Our data allow us to perform our analysis at highly granular geographical units of 100 square kilometres.

We utilise the fact that during the rollout phase of the SMIP a number of mobile phone towers were moved from the originally planned locations due to inappropriate terrain conditions or to maximise the population covered by the tower. This allows us to compare areas where new SMIP towers were proposed and eventually constructed, with similar areas where new towers were initially proposed but eventually not constructed. We combine this variation with information about the local language spoken in a given area. We focus on the share of individuals speaking one of the approximately 100 non-official languages of India. There are around 40 million individuals in India – mostly concentrated among the rural population – who effectively face a linguistic barrier to access the agricultural advice service offered by the KCCs. Jointly, the expansion of mobile phone coverage and the ability of farmers to seek agricultural advice in an official language, allows us to identify the effects of reducing information barriers among farmers on agricultural practices.

Figure 1a shows the evolution of farmers' calls to KCC after the construction of a new mobile phone tower. The figure shows that the number of calls to KCCs, which originated from a certain area, increases substantially following the construction of a new mobile phone tower in the area. These findings are consistent with a large and under-served demand for agricultural advice among Indian farmers. Figure 1b shows that that the increase in calls is concentrated in areas where the majority of the local population speaks one of the official languages in which the calls are answered by KCC.

Figure 1a. Effect of mobile phone tower construction on phone calls made to Kisan Call Centres 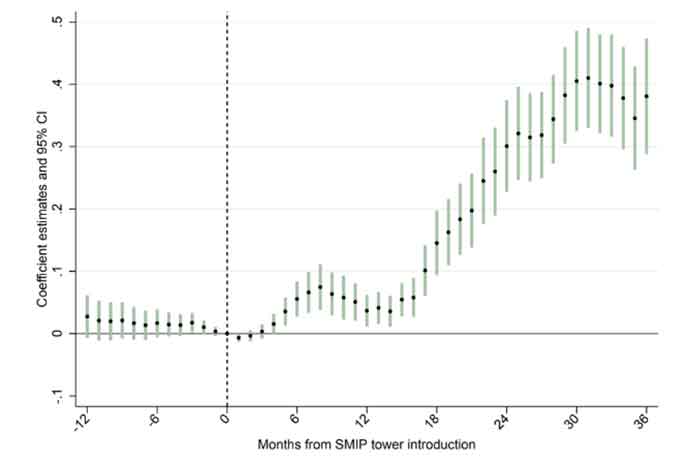 Notes: i) The figure plots the monthly coefficient capturing the differential effect of mobile tower construction under SMIP on number of calls made to KCCs from a ‘difference-in-difference’3 estimator.

ii) Month 0 is ‘normalised’ to be the month in which SMIP mobile phone tower was constructed.

Figure 1b. Effect of mobile phone tower construction on phone calls made to Kisan Call Centres, by official and non-official language speakers 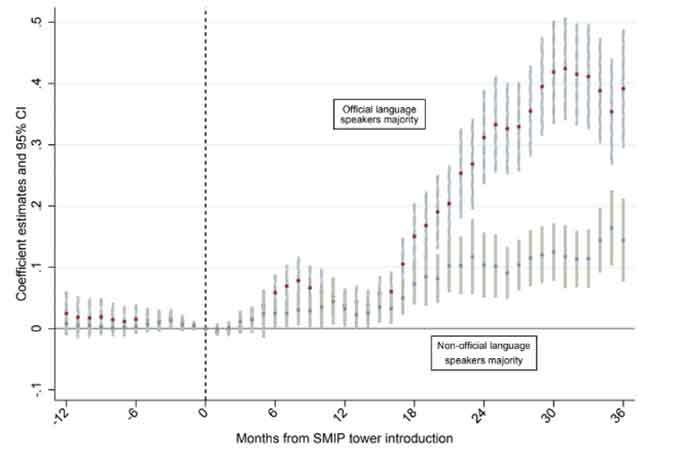 Notes: (i) The figure plots the monthly coefficient capturing the differential effect of mobile tower construction under SMIP on number of calls made to KCCs from a difference-in-difference estimator, separately for areas where the majority of the population speaks (or does not speak) one of the official languages of the KCCs.

(ii) Month 0 is normalised to be the month in which SMIP mobile phone tower was constructed.

We show that the increase in potential access to information had a positive effect on the adoption of advanced agricultural technologies among Indian farmers. Areas where mobile phone coverage increased, due to the construction of mobile phone towers, experienced an increase in the adoption of high-yielding varieties of seeds as well as complementary technologies such as fertilisers and irrigation systems. These areas also experienced an increase in the application of pesticides on agricultural land. These effects are larger in areas with lower language barriers between farmers and agricultural advisers at KCCs. Consistent with the hypothesis of information provision, we show that farmers in areas with lower language barriers made more calls to KCC seeking information on exactly these technologies.

Finally, we analyse the effect of farmers' access to information on agricultural productivity. In particular, our estimates indicate that providing full mobile phone coverage to the areas in our sample, coupled with the availability of a phone-based service for agricultural advice, can close around 25% of the baseline gap in agricultural yields between regions in the 25th and the 75th percentile. The baseline gap in yield between the 25th and 75th percentile is similar to the one documented in rice and wheat production between the top decile and the bottom decile of countries in the world income distribution (Gollin et al. 2014). We also show that the effect of access to information varies across farmers with different initial productivity, and it is the largest for farmers with the lowest initial level of productivity. Our findings, therefore, indicate that the lack of access to information on agricultural practices and inputs can explain a significant fraction of the agricultural productivity gap across Indian regions, and can inform the debate on the drivers of such gaps across countries.

The last 20 years have witnessed a widespread diffusion of mobile phones in developing countries. At the same time, these countries have expanded their agricultural extension programmes. Our findings show that mobile phones provide an effective channel of information dissemination and thereby can facilitate the knowledge transfer between agricultural advisers and farmers. Recent advancements in communication technologies including 3G/4G mobile services along with social media and online information-sharing websites can further help the diffusion of information among farmers. One important consideration, though, has to do with the welfare consequences of uneven access to such information. Our results indicate that areas currently excluded from the KCC programme due to language barriers between farmers and agronomists benefit much less from the introduction of mobile phones, leading to widening disparities across areas. This highlights the importance of promoting universal access to agricultural advice by removing language barriers to the service, thus enabling all farmers to exploit the full potential of their mobile phones.