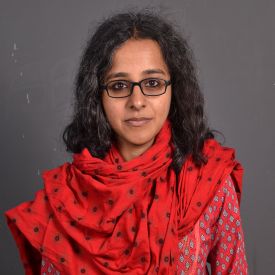 In South Asia, low child sex ratios are increasingly an isolated Indian phenomenon. Within India, child sex ratios are ‘normal’ among Christians and Muslims but much lower among Hindus, Sikhs, and Jains. One probable explanation could be that scriptures of Abrahamic religions explicitly forbid female infanticide. This article argues that religion is an important fulcrum of differences in child sex ratios between communities and countries, apart from socioeconomic indicators.

Since the eighties, the introduction of ultra-sound technology in India has spawned the extreme patriarchal practice of sex-selective abortion. This acute gender discrimination is reflected in the large number of ‘missing women’ in the population (Sen 1990). More recently, demographic literature has begun to identify religion as an important fulcrum of differences in child sex ratios between communities and countries, apart from socioeconomic indicators (Borooah et al. 2009). My research (Narayan 2018) extends this argument in the South Asian context and argues that religious sanctions assume greater significance.

On the one hand, Islamic religious sanctions, similar to other ‘Abrahamic religions’ which share historic roots, constitute a progressive influence as they explicitly condemn infanticide of female children (and by moral extension sex-selective abortion). On the other hand, the ‘Dharmic religions’ (a generic term used for faiths which have originated in the Indian subcontinent) do not have explicit injunctions. Therefore, in recent decades the child sex ratios of – Sikhs, Jains, Hindus, and Buddhists – have plunged below the ‘normal’ benchmark (Figure 1). 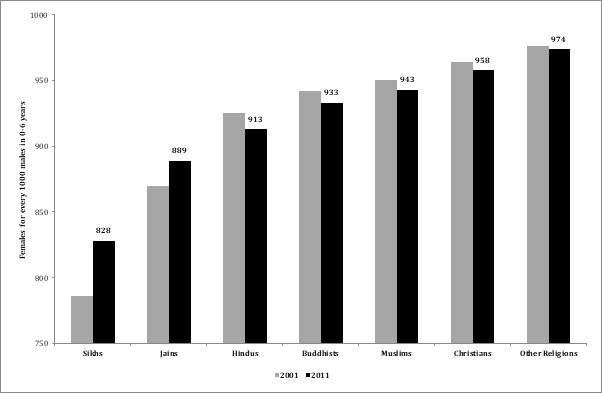 The Quran, for example, explicitly forbids both infanticide and female infanticide, a practice common in Arabia since antiquity. Most importantly, the Surah Al-Isra spells out, “you shall not kill your offspring for fear of want. It is we who provide for them, and for you. Indeed, killing them is a great sin” (17:31). But apart from the scriptures there are also a number of other cultural factors, which ensure better sex ratios among Muslims, despite lower levels of literacy and economic development.

In this context, comparisons among South Asian countries (excluding Afghanistan, Bhutan, and Maldives) indicate several important regional patterns (Figure 2). First, the Muslim advantage in sex ratios seems to be pronounced in South Asian countries. In 2011, India’s Muslim-majority neighbours, Pakistan and Bangladesh largely possessed normal child sex ratios (shaded in dark green colour). Bangladesh has had a historic fall in fertility in the last three decades from 6 to 2.2 children per woman. Nevertheless, Bangladesh has also simultaneously substantially improved sex ratios since 1990 to the current 982 females for every 1,000 males. Despite the disclosure of the sex of the foetus (since it is not banned with ultra-sound technology), the practice of sex-selective abortion is “almost entirely absent”, as abortions themselves are illegal. 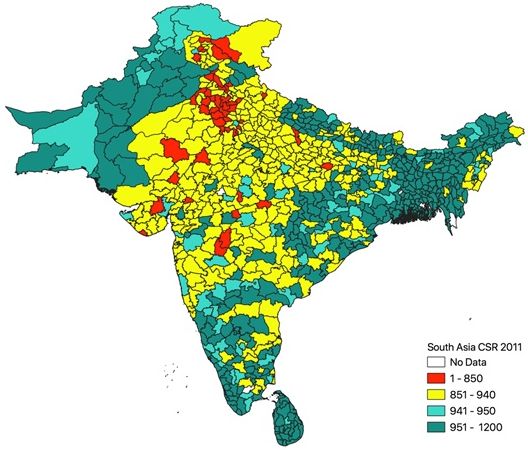 Notes: (i) For Pakistan in 2011 only province level averages and not district level data has been employed. The latest 2017 Pakistan census has not yet released child sex ratios. (ii) Indian data is for 0-6 years while all other countries report 0-5 years and Bangladesh 0-4 years. (iii) Data has been presented as female children for every 1,000 male children. (iv) he borders in the map represent only district boundaries and not political borders. Analysis excludes Afghanistan, Bhutan, and Maldives.

Second, comparisons across border areas sharpen the contrasts. The difference between the healthy ratio in the Pakistani province of Punjab (965) compared to the abysmal one in the Indian state of Punjab (846) with many districts shaded in red) is particularly stark. Religion is largely the most important point of distinction across the two sides of the Punjab border, which have a shared history. Other reasons could also include the widespread availability and affordability of ultra-sound technology in India as compared to Pakistan. Further, interestingly, a study of immigrants (largely Punjabi) in Norway since 1987, finds that only mothers of Indian-origin display skewed sex ratios for third and fourth births, while the Pakistani cohort has maintained a stable ratio from 1969-2005 (Brekke 2013).

Third, increasingly India seems to have become an exception in South Asia due to misuse of sex-determination technology. Even Nepal as a Hindu majority country despite increasing incidences of sex-selection since the 2002 legalisation of abortion in the first trimester has better child sex ratios than India. Sri Lanka as a Buddhist-dominated country fares even better as abortion is illegal.

Fourth, though all of India’s neighbours have improved their child sex ratios in the last decade, within India child sex ratios have aggravated (barring Punjab and Haryana which have crafted an improvement albeit from an abysmally low base). The blight of low sex ratios has spread to twice the number of districts in the country between 2001 and 2011 especially in the prosperous belts of western and southern India.

Lastly, another perverse trend in India is that educated women from relatively prosperous households are more likely to practice sex-selective abortion (Bhalhotra and Cochrane 2010).

Further within India, there seem to be distinctive patterns between child sex ratios, religion, geography, and literacy. The 2011 Census indicates that Scheduled Castes (941) and especially Scheduled Tribes (962) have higher child sex ratios than other castes (943). This trend of higher sex ratios among marginalised castes was noted even in pre-independence census reports. The 1931 Indian Census, for example, observed that, “it is generally recognised that the ratio of females to males increases inversely with social standing among Hindus”.

In sum, this research indicates that it is imperative to disaggregate child sex ratios based on markers of religion, caste, literacy, geography, and kinship to analyse in greater depth the underlying influencers of sharp differences between communities and countries within South Asia. Increasingly, within South Asia, low child sex ratios are an isolated Indian phenomenon that is worsening among upper-caste Hindus. On the other hand, there is negligible evidence of large-scale sex-selective abortion in neighbouring South Asian countries. Therefore, there is much for India to learn from her neighbours.

That was super interesting to read through !