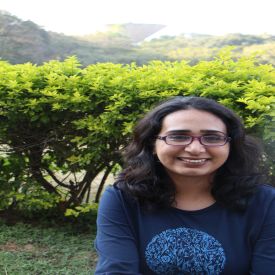 This creation of new administrative districts by splitting existing districts is a frequent occurrence in India, where the number of districts has more than doubled in the last four decades. Looking at data from 1991 to 2011, this article considers the effect of this fragmentation on economic outcomes. It finds that impacted districts tend to be more homogenous than before; the split is especially advantageous for newly created districts, which reap the redistributive benefits of bifurcation.


Sub-national administrative boundaries in many developing countries are fluid. Administrative proliferation or government fragmentation involves carving out new states, districts, sub-districts, etc. This creation of new administrative units by splitting existing ones at subnational levels is commonplace (Grossman and Lewis 2014). Since the 1950s, India has seen frequently created new districts. While the nation had 356 districts in 1971, and 640 in 2011, the number of districts has since grown to 7801. The stated reasons for creating new districts are administrative ease and better developmental outcomes by bringing the state closer to the citizens (Asher et al. 2018, Brinkerhoff et al. 2018).

There is an unmistakable trend towards creating more districts, which has picked up pace since the Panchayati Raj amendments2 in 1992 (see Figure 1). It has been theorised that once decentralisation reforms are implemented, the benefit from controlling each sub-national unit increases, and there is incentive for local elites to demand the creation of new units (Grossman and Lewis 2014). 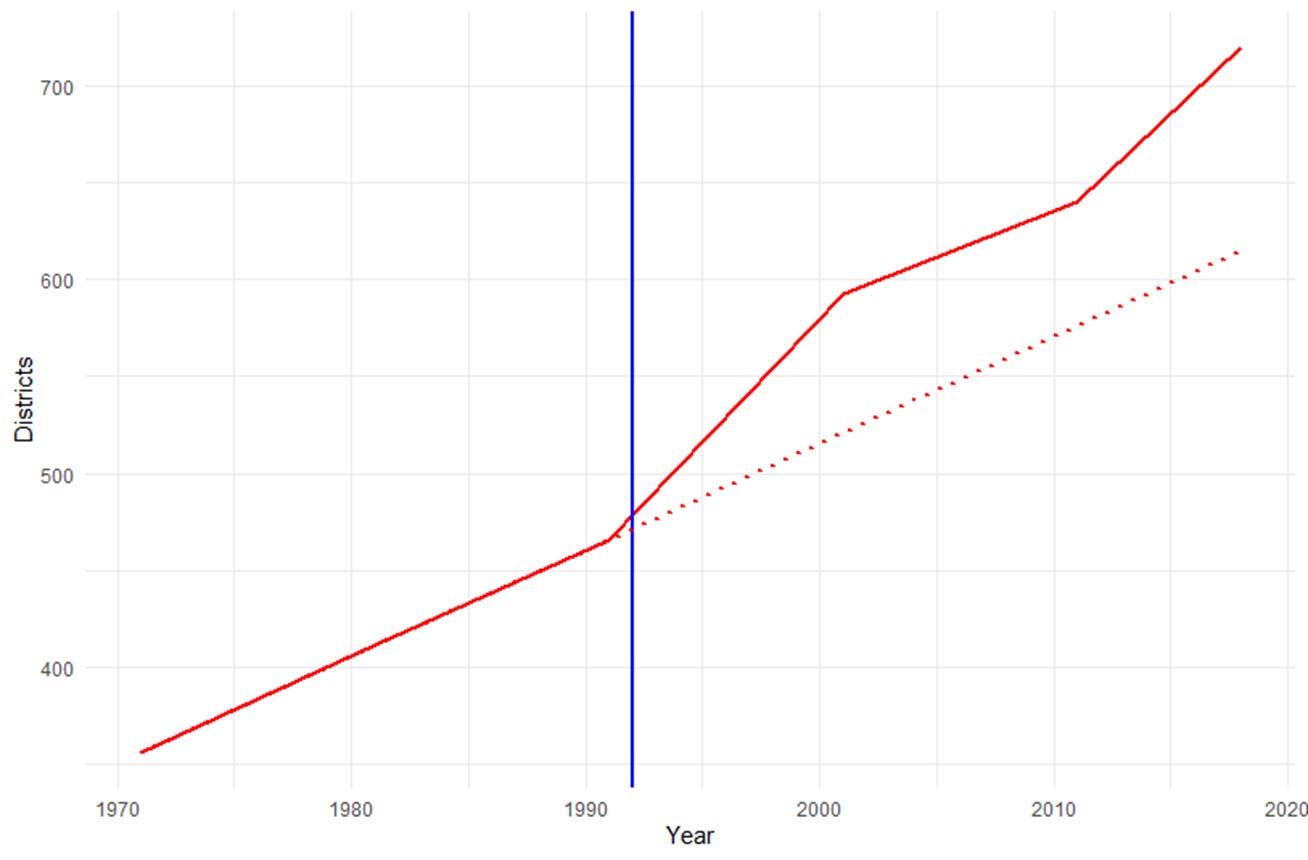 Note: The blue line corresponds to the year of introduction of the Panchayati Raj amendments of 1992. The red line graphs the number of total districts in India across years. The red dotted line is a projection of the total districts according to the trend up till 1990.

Although administrative proliferation is often associated with decentralisation reforms, it is a distinct policy choice. Decentralisation involves the devolution of responsibility, authority, and resources to lower-level governmental units (Falleti 2013), while administrative proliferation only creates new governmental units without changing the underlying fiscal and administrative structure (Grossman and Lewis 2014, Grossman et al. 2017). However, creating new districts brings citizens closer to their administrators and makes each district smaller and more homogeneous in terms of ethnicity and preferences, theoretically leading to better development outcomes (Pierskalla 2019).

Using data collected on public goods provisions and social category in the districts of India over two census periods (from 1991 to 2011), and night-time luminosity measures4 during the same period, we investigate whether there are observable differences in terms of ethnic composition and economic outcomes between the districts that are chosen to be newly formed and the ones that remain. We computed two demographic variables from the census population data – a fractionalisation5 and a spatial dissimilarity6 index.

At a sub-district level, the category-wise7 (SC, ST, OTH) population distribution is likely to be different from that of a higher administrative unit such as a district. We find that sub-districts in districts that were split (both ‘parent’ and ‘child’ districts) are different from those in regions that did not split. We compared economic outcomes and ethnic distribution of split districts with that of unsplit districts, while controlling for other demographic and economic variables such as share of urban population, share of agricultural labour, share of literate population, and indicators of public goods such as the number of primary schools and primary health centres in the subdistrict.

Both fractionalisation and dissimilarity were greater in split districts, and the differences were statistically significant. Similarly, we compared the economic outcomes of the regions before bifurcation, using an indicator which measures if the average night-time lights in the subdistrict is higher than the district of which it is a part. Within a split district, marginalised areas with a higher level of dissimilarity and lower levels of economic outcomes are more likely to split off and form a new district in the future.

We also explore whether the newly created ‘child’ districts have better developmental outcomes compared to the part that remained with the erstwhile ‘parent’ districts. We find that ‘child’ districts do significantly better than the ‘parent’ district, in economic outcomes, measured in night-time lights. The effect persists for a few years, and then tapers off. We also find that district that were split – both parent and child districts – do better than district that were never split.

Figure 2. Difference in per capita night-time lights for ‘child’ and ‘parent’ districts 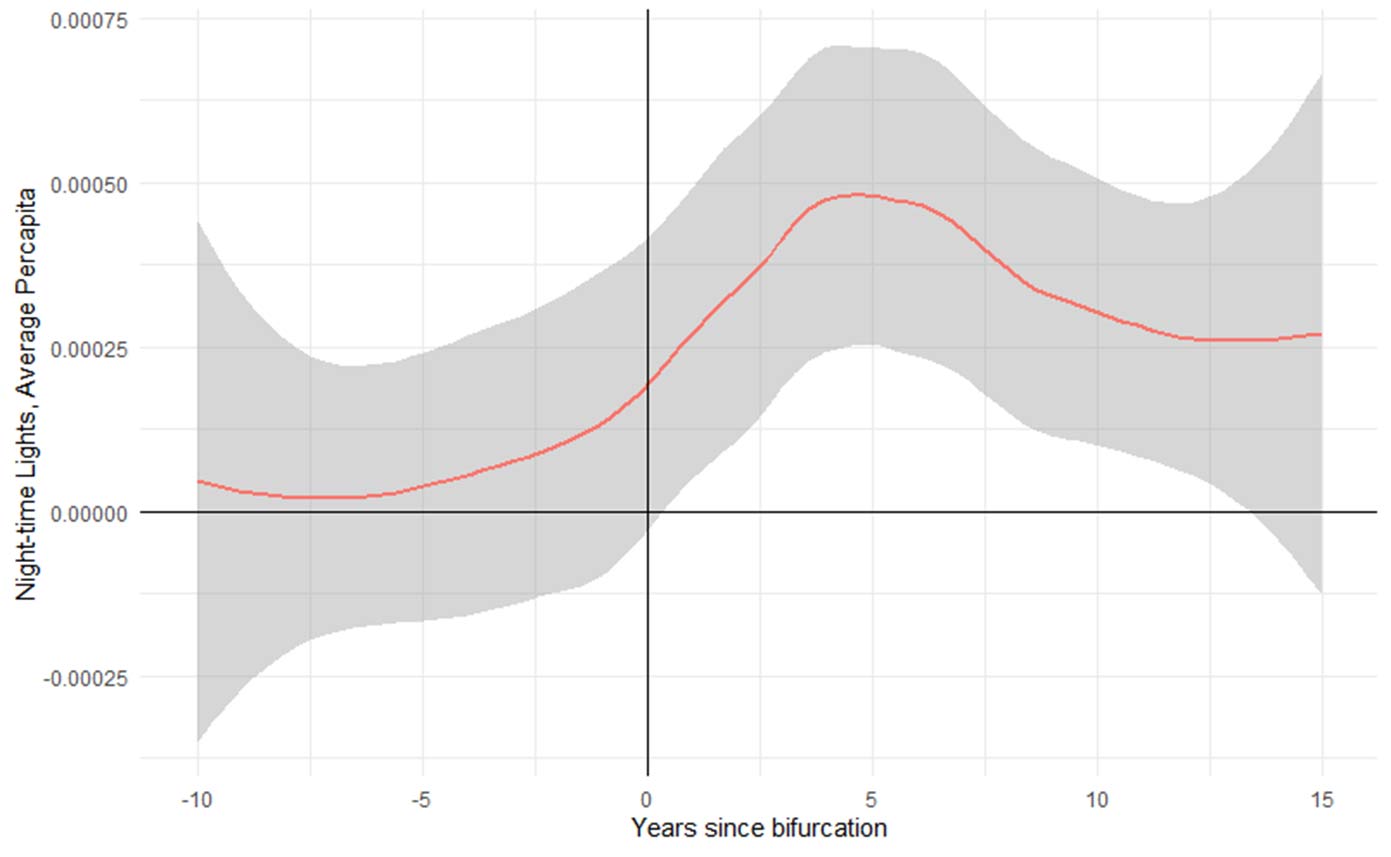 Note: The figure plots the difference between the average per capita night-time lights of the child districts and the parent districts in the years before and after the bifurcation.

Our findings support the hypothesis that district bifurcations are beneficial for the overall district – and especially newly created districts – in terms of economic output. There could be two underlying mechanisms for the observed effects – it may be arising due to the greater homogeneity in population distribution after the split, or due to the redistributive benefits of bifurcation.

After the bifurcation, both the child and the parent region tend to be more homogeneous than before. We find that when compared with a similar district that was never split, both child and parent districts do better in terms of economic outcomes. This suggests that that the greater homogeneity in population distribution and preferences after the split could be playing a part in the observed outcomes.

However, the child regions do better than the parent regions in the post bifurcation period. This is reasonable to expect, because the villages in the child district gain an additional advantage of having a new administrative setup built closer to them. This is consistent with the findings of Asher et al. (2018), who suggested that reducing the distance between citizens and administrative centers could lead to better outcomes using data from India. The parent region already has an established administrative system, and therefore the redistributive effects due to the creation of a new district headquarters do not come into play in the parent district. The observed benefit to the child region over the parent region seems to suggest that the observed effects are due to redistributive benefits. Thus, our findings suggest that both the mechanisms of population homogeneity and redistributive effects are at play in district bifurcations.

We note here that government functions are many and varied, and the effect of population size on one of those functions might not be the same as that on others. As such, this study limits its comments on local government size to general economic outcomes as measured by night-time lights, without commenting on the performance of local governments with respect to other functions and services, or the efficiency and cost of service delivery. Administrative proliferation as a policy measure has mixed results with specific public service measures such as education, sanitation, water supply, or maternal health (Carlitz 2017, Lewis 2017, Billing 2019, Halimatusa’diyah 2020). Although the population per district in India is high, and as such the observed effects of administrative bifurcations may fall off at lower levels of population per administrative unit, the findings from this study suggest some positive aspects of administrative proliferation.