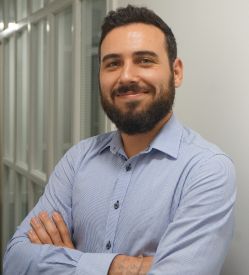 Do Members of Legislative Assemblies (MLAs) facing pending criminal cases receive favourable treatment in the Indian legal system? This article uncovers opposite effects of winning office, depending on the political alignment with the state ruling party. It shows that having cases disposed of without conviction during an MLA's period in the legislature is 17% more likely for ruling party MLAs, and 15% less likely for other MLAs.

The presence of an independent and impartial judiciary is a central tenet of democracy. Whilst most democracies establish these attributes in their constitutions, in practice, politicians in office may substantially influence the legal system to promote their interests.

This concern between political power and the legal system has been a long-standing issue for hundreds of years (Montesquieu and Secondat 1748), and it is still a crucial concern nowadays, especially but not limited to developing countries. For instance, data from the World Economic Forum for 2018 show similar perception of judicial independence for economies with diverse level of development such as Brazil, India, Indonesia, Italy, and Spain.

Do the enforcement and administration of justice get compromised when those accused have political power? If so, does this depend on the political alignment with the ruling party?

Answering these questions is relevant, not only because a politicised judicial system violates a fundamental human right – equality before the law – but also because it compromises other aspects of society and the economy. A persuadable judiciary facilitates corruption (Rose-Ackerman 1999), and decreases investment and growth (Glaeser et al. 2003, Voigt et al. 2015). It also erodes citizens' trust in institutions, increases social inequalities, and encourages people to do justice themselves, outside the limits of the law (Transparency International, 2015). Finally, it creates incentives that attract dishonest people into politics, raising serious concerns over the quality of the political apparatus. This is particularly concerning for India as Figure 1 below shows. 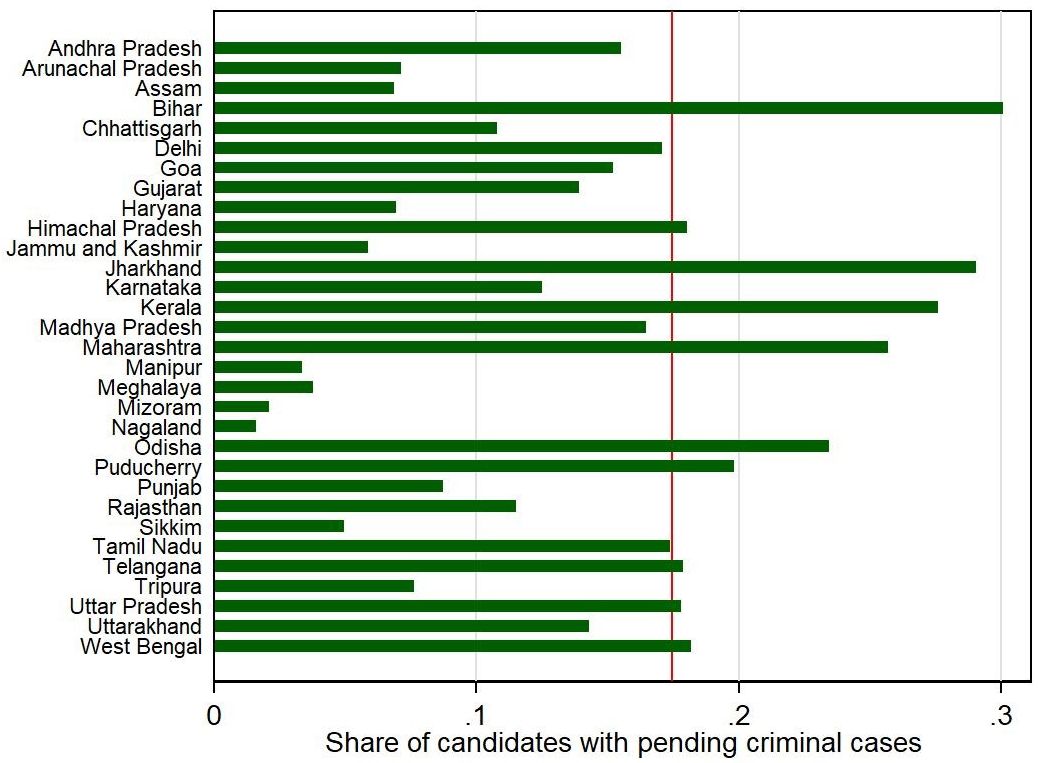 Note: Figure 1 shows data for each state’s last assembly election up to 2017.

In recent research (Poblete-Cazenave 2019), I study these questions in the context of Indian MLAs facing pending criminal cases. Since a landmark ruling of the Supreme Court that changed the law of information in elections, candidates running for a Legislative Assembly are obliged to disclose their pending criminal cases and convictions before elections. This information and the fact that MLAs can be prosecuted during office are used to analyse how political power can be used to influence legal outcomes.

To separate the effects of winning a seat in the Legislature Assembly on court proceedings (sentencing and speed of the cases) from other confounding factors, I focus on candidates contesting in close electoral races1 as a random allocation of political power. Hence, candidates who barely lost the election represent a good comparison for those who barely won the election. Then by looking on the cases’ outcomes five years after the (close) election we are able to identify the causal effect of becoming an MLA, on legal outcomes.

Does winning a seat in the assembly imply special treatment in courts?

Based on information from candidates’ affidavits, I construct a panel dataset2 of criminal cases for politicians running for Legislative Assemblies in India since 2004. The data show that nearly 18% of the candidates have at least one pending criminal case. The share of candidates with pending cases varies considerably across states as shown in Figure 1, where the number could be as high as 30% in the case of Bihar in 2015.

The analysis uses these criminal cases that are pending before the elections and compare their outcomes among candidates with political power versus those without. Specifically, I compare the probability of a pending criminal case being disposed without conviction for politicians who barely won an election against those who barely lost it, within the duration of the legislature.

Tracking candidates’ criminal cases in the legal system is complex due to institutional constraints and the lack of comprehensive accessible legal data. However, given the information disclosed in the affidavits, if a candidate reruns for elections, it is possible to know whether the pending criminal case is still ongoing just before the next election or whether it was disposed of without conviction.

Nearly 60% of candidates’ pending cases are disposed of without conviction during the legislature. On average, candidates with criminal cases have three cases against them and each case has four criminal charges, where almost 60% of the times one of these charges is a serious charge.

Figure 2. The five most common criminal charges against political candidates in the sample

The results show that, on average, politicians winning a seat in the assembly do not receive favourable treatment in courts compared to candidates who lost the previous election. However, there are heterogeneous and opposite effects of becoming an MLA depending on the political alignment with the state ruling party. MLAs from the party in government do get favourable treatment on their cases (in terms of speediness of trials and sentencing), while the cases involving MLAs from parties which are not in government take much longer to be resolved.

Does the severity of the charges and institutional capacity matter?

The findings suggest potential (mis)use of certain attributions vested on the executive to manipulate law-and-order officials. As in most countries, several actors involved in the legal process depend directly on the current government. This makes them more susceptible to political pressures. Politicians from the governing party might affect the career paths of legal officials through the use of appointments, removals, or foregone career opportunities, among others.

Understanding which institutions and actors are affected and more susceptible to political pressures is a crucial step in improving the level of independence of the legal system. More detailed and disaggregated data on the different actors and stages of the criminal process would be required to deepen our understanding and to allow the creation of effective policies to prevent the abuse of power. This research is a first step in this journey towards a truly independent, impartial, and inclusive legal system.

He is a criminal but he is our criminal: Criminally accused politicians in India