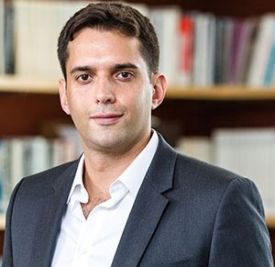 The provision of free and fair elections is a public service critical to maintaining accountability and responsiveness of elected officials. This article examines the administration of polling stations and shows that voting outcomes can be influenced by the religious and caste composition of the teams of officers who manage stations on election day. It also provides evidence on the importance of the form of identification possessed by voters.

Questionable neutrality of election administration is a wide-ranging concern. In the most recent completed round (2010-2014) of the World Values Survey – more than one quarter of respondents in nearly 75% of sample countries – indicated that election officers are often unfair. For India, the share was roughly 33%.

In recent research (Neggers 2018), I consider polling station administration during the 2014 general elections in India, which involved approximately eight million election officers and security personnel, and more than 800 million electors. I focus on two districts in Bihar that covered more than 5.6 million electors across roughly 5,500 polling stations. Analysing polling-station-level administrative data on officer assignment and voting outcomes, I find that the presence of a Muslim or Yadav1 officer at a polling station significantly impacts voting outcomes, but that these effects are attenuated when the rate of government-issued voter identity card coverage is higher. To better understand the mechanisms through which these effects occur, I fielded surveys with more 5,100 randomly-selected polling station officials and electors from the 2014 elections in the same areas of Bihar as the administrative data. A combination of evidence from these surveys suggests that one relevant channel is own-group favouritism by election officers in the identity-verification process that occurs before votes can be cast.

Determining the impacts of the composition of election officer teams on voting is typically difficult because other factors that themselves affect voting outcomes may also influence the placement of officials at polling stations. A government might, for example, assign election personnel with greater experience to manage more troubled locations in an effort to maintain neutrality or, alternatively, the ruling party may station supporters as officers in strategically important areas to influence voting outcomes in their favour. In such cases, comparisons across stations with different types of officers may give biased estimates of the effects of officer team composition on voting.

Avoiding problems of this type, I use a natural experiment that took place during the 2014 elections, where the government randomly assigned State personnel to the teams of typically 4-5 officials managing polling stations on election day. This random assignment generates variation in the religious and caste composition of officer teams, that is uncorrelated with other characteristics that may themselves influence voting. I can then determine the effects of team composition on voting by comparing outcomes at polling stations with different sets of officers.

Analysing voting outcomes in Bihar across polling stations with different team types, I find that the presence of a Muslim or Yadav officer on a polling station team (‘mixed team’), versus having a team with no Muslim or Yadav officers (‘homogeneous team’), significantly shifts the vote share margin, on average, between the Rashtriya Janata Dal (RJD) and Bharatiya Janata Party (BJP) coalitions in favour of the RJD by 2.5 percentage points or 13.8%.2 Underlying the vote share impact, I also observe that mixed teams increased the votes received for the RJD by 4.9% and decreased votes for the BJP by 4.2%. Votes received by the Janata Dal (United) (JD(U)) and overall turnout were unaffected.

Next, I consider the potential relevance of the possession of government-issued elector photo identity cards (EPICs) to the impacts of officer team composition. The verification of elector identity that occurs at polling stations prior to voting involves discretion in the decision-making of election officers, and the scope for this discretion may be influenced by the identification documents that potential voters possess. While the EPIC is the most straightforward and officially preferred form of identification, potential voters are also allowed to use a number of other documents for identity verification. They may be less certain, however, about the details of the rules surrounding the use of those documents, making them less likely to dispute officer judgments regarding qualification to vote, or increasing their susceptibility to influence in choice of candidate.

If team composition influences the administration of the identity verification process– and citizens’ EPIC possession reduces the scope of potentially discriminatory discretion available to officers during that process, areas with higher EPIC coverage may see reduced impacts of team composition on voting. Testing for such a relationship, I do find that the effects of officer team composition are concentrated in regions with lower levels of EPIC possession, as shown in Figure 1. Having determined that the identities of the officials managing polling stations on election day can matter for voting outcomes, I then consider why this might be. 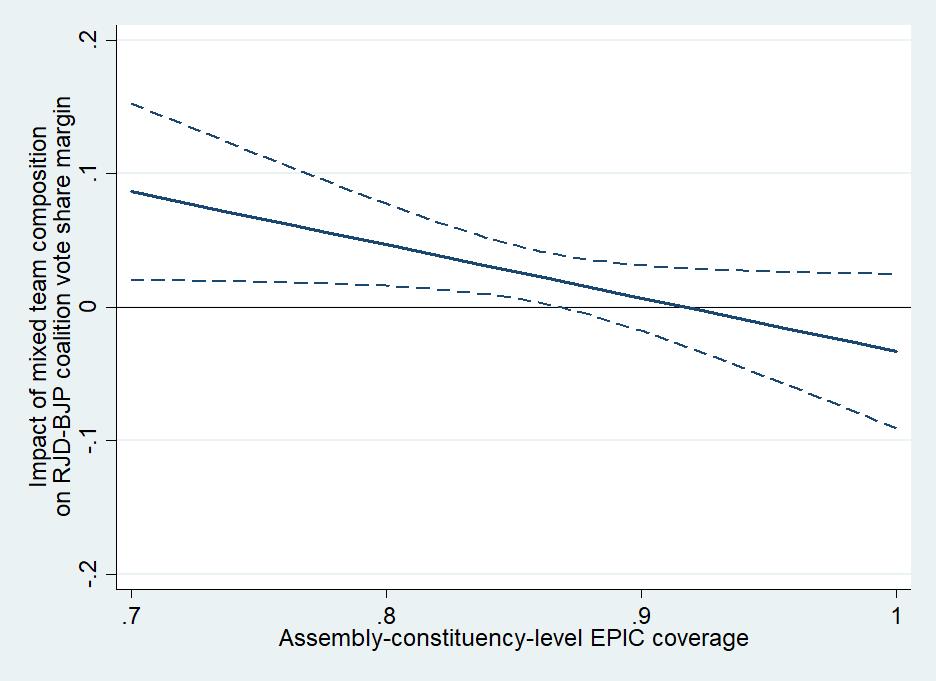 In my survey of polling station officials, I used a vignette experiment to generate a measure of bureaucrat own-group favouritism in decision-making related to elector identity verification.3 Officers assessed the likelihood that a hypothetical individual would be allowed to vote, based on a description where all information was held constant across respondents with the exception of a randomly assigned name. Officers were 10 percentage points or 25%, more likely to favourably assess qualification to vote when they were of the same religious/caste-group type as the potential voter being considered.

I then turn to individual-level survey evidence on citizens’ election-day experiences. First, I consider whether electors viewed biased behaviour by polling station officials as a relevant election-day phenomenon. As asking respondents directly about potentially sensitive topics may lead to unreliable answers, I used the list randomisation technique to elicit this information indirectly.4 My results indicate that roughly 23% of respondents feel that officers at their polling stations treated the public differently based on religion or caste, and 14% that officers attempted to influence voting behaviour on election day.

In addition, based on respondents’ self-reported experiences, Figure 2 plots the probability of being allowed to vote for each of four elector categories (Muslim/Yadav or not; possess EPIC or not), separately by whether they interacted with a homogeneous versus mixed team at their polling station. I find that non-Muslim, non-Yadav electors have significantly higher probabilities of being allowed to vote at polling stations with all non-Muslim, non-Yadav officer team members, while no such effects are observed for Muslim and Yadav electors. These differences by officer team composition and potential voter religious/caste-type are absent, however, when individuals possess an EPIC, consistent with the earlier findings based on administrative data. Together, these results suggest that the impacts of team composition on voting outcomes are driven at least in part by own-group favouritism of election officers during the voter identity verification process.

While the administration of Indian elections is technologically advanced and highly regulated, these findings demonstrate the remaining importance, even near the present frontier of election practices, of the identities of local-level election personnel. It is not possible in the context considered in this work to determine whether greater diversity within teams of election officers strengthens or further weakens the impartiality of polling station management, and mandating that mixed composition occur may not always be politically or administratively feasible regardless. My results, however, demonstrate that policies which restrict the scope for discretion in officer duties in the first place may be a promising alternative in reducing the ability of local-level election officers to discriminate on election day and influence voting outcomes.