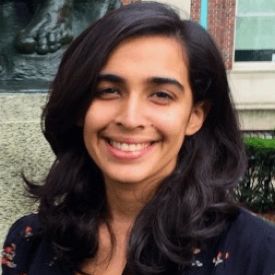 Multiple states in India incentivise village communities to elect their political representatives by community consensus, doing away with the need for state governments to organise official secret ballot elections. This article analyses the effects of these incentives in Gujarat for the period 2011-2015. It finds that such elections, like other community-based processes, are prone to capture by the local elite, and can lead to worse governance overall.

Community-driven development and local electoral reforms have become central tenets of policy across the developing country landscape (Mansuri and Rao 2013). Many states in India including Andhra Pradesh, Gujarat, and Punjab have tried to meld these two approaches together by incentivising the election of local politicians via community consensus. However, increasing community participation does not always lead to improved outcomes (Khwaja 2004), and qualitative evidence suggests that these processes are prone to capture by the local elite (Breman 2011, Ganguly 2013). My research (Arora 2018) shows that incentivising consensus-based elections reduces political competition, crowds in younger, more educated politicians, and worsens overall governance.

Since 2001, Gujarat has incentivised the election of local politicians via public consensus under its samras (consensus) Panchayat scheme. Village residents are encouraged to deliberate amongst themselves, and reach a consensus on who their political representatives should be. This scheme is aimed at preventing multiple candidates from standing for election, so that the sole candidate to file nomination papers can be declared as the unopposed winner. This prevents the need to organise official elections, reducing the state government’s expenditure on the set up of polling booths and the hiring of election officers.

The policy has been fairly successful. In the 2011 elections, one out of every seven Gram Panchayats (GP) (elected village councils) in Gujarat were elected by consensus. That is, each council seat in these councils was filled by a candidate that faced no formal opposition.

The state government encourages consensus-based elections by providing untied grants to councils elected without formal opposition, that is, it directly rewards politicians who ensure that no other candidates stand for election. This financial grant increases discontinuously as GP population exceeds 5,000, from Rs. 200,000 to Rs. 300,000 for first-time samras GPs. The grant amount is even higher for second- and third-time samras GPs, as well as GPs that elect all-women councils.

The state government does not delineate formal procedures or place any restrictions on how village residents should reach a consensus about their political representatives. Naturally, instances of creative approaches to reach a consensus abound. In 2011, the village Kumkuva in south Gujarat organised a private election to choose amongst three competing candidates and ensure the receipt of the financial grant (DeshGujarat, 2011). The village Vadavali, home to a substantial number of Hindu and Muslim families, has decided to divide the President’s five-year term equally between a Hindu and Muslim President (NDTV, 2017). However, survey evidence suggests that it is usually local elites who nominate candidates and mobilise consensus-based support to ensure receipt of the monetary benefits (Breman 2011, Bandi 2013, Ganguly 2013, Guha 2014).

Three outcomes are examined in detail – political competition, since one of the stated objectives of the scheme was to discourage multiple candidates from running for political office; politician characteristics, to understand whether the grants crowded in individuals with different observable characteristics; council expenditure and MNREGA (Mahatma Gandhi National Rural Employment Guarantee Act)1 beneficiary selection, to test for measurable differences in governance by the council so-elected.

Did the samras grant actually incentivise village residents to choose their political representatives without official elections? The data suggest that it did. In response to a hike in the samras grant, the number of candidates per seat fell by approximately 0.7. This is a substantive decrease given that the average number of candidates per seat is around 2.5. The number of seats won without any formal opposition also increases by 2.3, which again is a large effect given that the average number of unopposed seats is just over 3.

Figure 1. Decrease in the number of candidates per seat in response to the grant increase 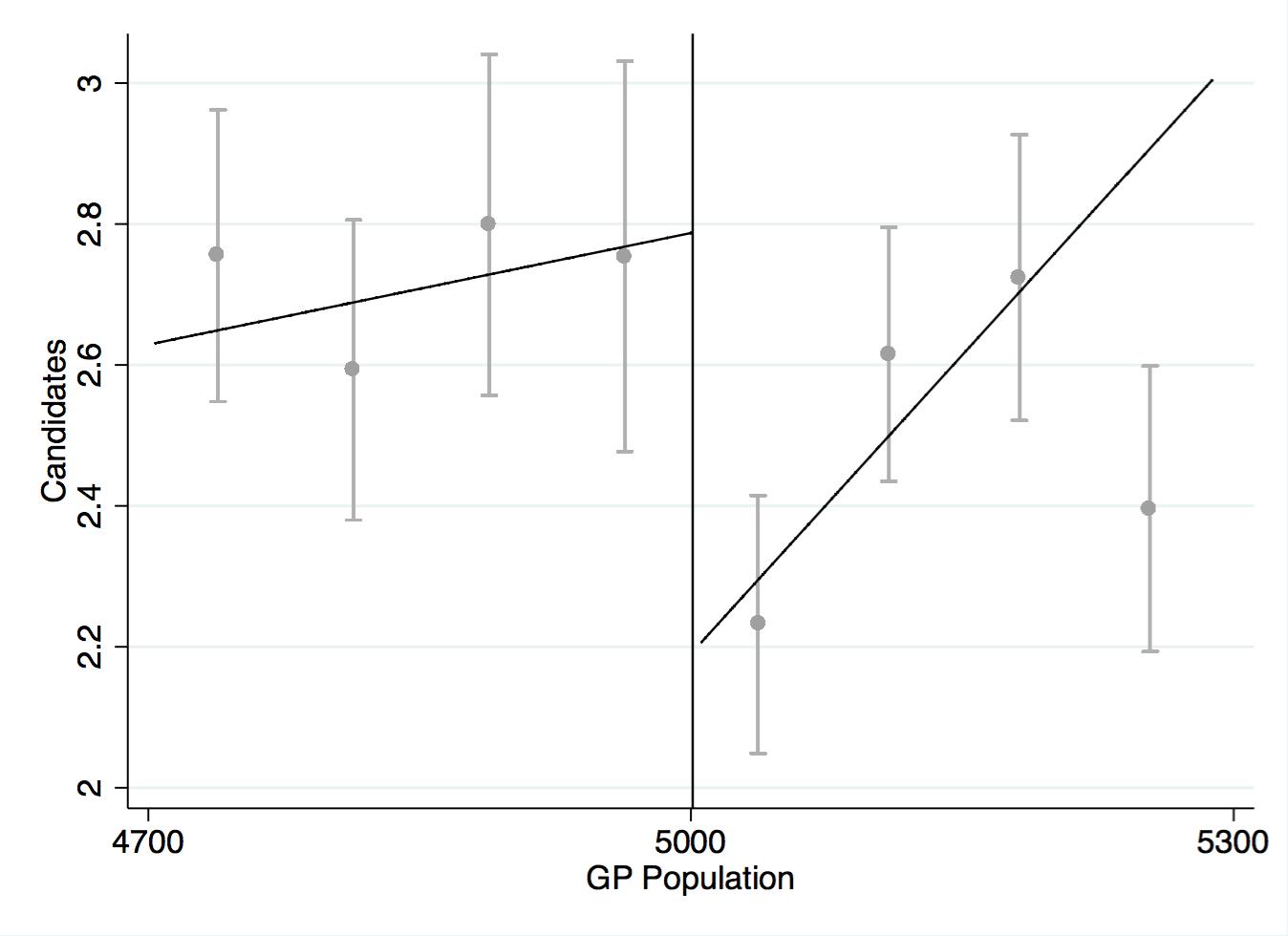 The fact that official political competition decreased in a substantial way leads us to question who exactly was crowded into political office. It is entirely possible that those who would have been elected without the samras grant continue to be those who occupy political office. In this scenario, the eventual losers of the electoral race would be discouraged from standing for election in the first place.

However, the samras grant may affect who is elected to political office. If the grant facilitates public deliberation amongst village residents or the nomination and support of candidates by the local elite, we may very well see a difference in observable characteristics of elected politicians, such as age, education, gender, and occupation.

Figure 2. Changes in politician age and education in response to the grant increase

We can test for this change by looking at how the observable characteristics of elected politicians change when villages are faced with bigger samras grants. The grant increase crowds in politicians that are, on average, four years younger and have two more years of schooling. Despite additional incentives for female representatives, the grant increase does not usher more women into political office. I also test for effects on occupation,and find that the grant does not increase the proportion of candidates from agricultural labour, farming or business backgrounds. All of these effects are driven by seats that are not reserved for women.

Consensus-based elections could crowd in younger, more educated politicians for two reasons. First, the majority of rural residents may consider these characteristics to be desirable for an effective political leader, and public deliberation helps shift candidates with these characteristics into political office. Under this hypothesis, we would expect to see GPs that face higher samras grants enjoying better governance than GPs that face lower grants. Second, local elites may nominate younger, inexperienced candidates that serve as political figureheads. This explanation is consistent with survey evidence that indicates that the grant amount is only used to justify nominations by the local elite, who threaten detractors in the name of village development. Under this scenario, we would not expect to see governance improve. In order to separate between the two hypotheses and determine whether consensus-based elections have had a beneficial impact on governance, I turn to multiple measures of the performance of the elected council.

To get a sense of the impact of the samras election grant on government performance, I test for changes in local expenditure and income generation close to the grant threshold. Total expenditure in the GP falls by Rs. 1,200,000, a decrease of over 50% of the average budget. This decrease is driven by a fall in expenditure categories that are directly controlled by the elected council, such as programme expenses of the agriculture, education, and health departments, as well as salaries and other administrative expenses. Expense categories that are chosen by and tied to grants received from the state and central government do not fall, which is consistent with the elected council having less control over these decisions.

Figure 3.Decrease in council expenditure in response to the grant increase 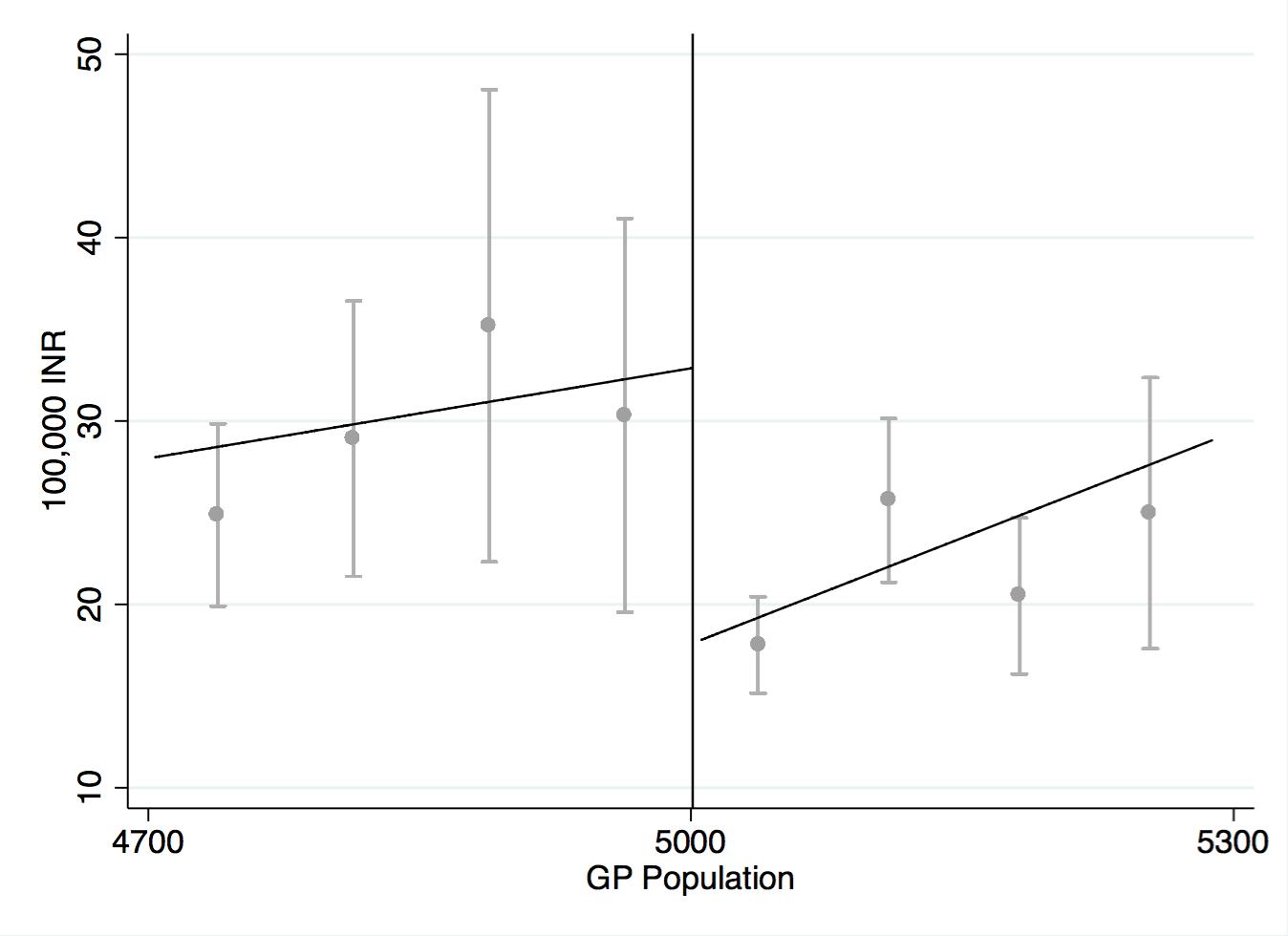 I also test for changes in the implementation of MNREGA. Existing work shows that while the Act is intended to guarantee one hundred days of employment to each rural household, in practice the amount and targeting of work provided is left up to local implementing authorities, and heavily influenced by the elected council (Gupta and Mukhopadhyay 2014).

The samras grant does not appear to affect how much employment is generated. This is consistent with most public works under MNREGA being approved at the block and district level. Targeting, however, is primarily the responsibility of the elected council. The number of Scheduled Caste and Scheduled Tribe (SC/ST) households employed under MNREGA decreases in response to the grant hike. This extensive margin response also translates into an intensive margin response – person-days of NREGA employment for SC/STs fall. This finding is indicative of more regressive targeting of MNREGA employment, and worse governance overall.

The results of this research inform policymakers about the impact of the samras consensus-election grants. The results indicate that financial incentives can induce village electorates to choose their political leaders without formal opposition. The grants also crowd in younger, more educated candidates and politicians. However, administrative and developmental expenditure in the village falls, and MNREGA employment is targeted more regressively. These findings are consistent with the fact that politicians that rely on the support of local elites, who have a greater say in elections based on community consensus, are not incentivised to appease village residents in order to get re-elected.