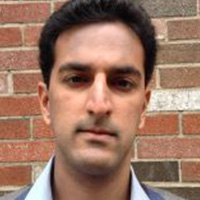 India's formal judicial system is infamously slow, even for a developing country. What is less well established is whether this matters to economic outcomes. This column uses state-level variation in the speed of courts coupled with the fact that certain industries rely on contract enforcement more than others, to show that slow courts in India have a substantial negative impact on output and employment growth in the formal manufacturing sector.

“We want people to come and ‘Make in India’, we want people to come and invest in India, but those whom we are inviting are also concerned about the ability of the judicial system in the country to deal with the cases and disputes that may arise out of such investments. Efficacy of the judicial system is so vitally connected with the development of this country. And therefore, it is not only in the name of... the poor litigant, people who are languishing in jails, but also in the name of development of the country ... that I beseech you to rise to the occasion...”

The statement above, addressed directly to the Prime Minister at this year's Annual Chief Ministers and Chief Justices Conference, was part of an emotional appeal by the Chief Justice for the central government to dramatically increase the judicial strength of the country, as per the perennial recommendations of regular Law Commissions. His plea was based in part on the idea that delivering justice more speedily would bolster the economic development of the country by improving the enforceability of contracts. Though reasonable on its face, this idea has not yet been subject to much empirical scrutiny and is not without its critics. Some have argued that firms without access to efficient formal contract enforcement mechanisms can find effective informal substitutes (Acemoglu and Johnson 2005). For example, firms could enter into long-term relationships with particular suppliers or customers, relying on the implicit threat that the relationship might end if the parties do not abide by the agreed upon terms. Alternatively, parties in the same kinship or other network could rely on the larger network to impose sanctions on those that attempt to abuse the terms of a contract. Whether these informal substitutes can adequately make up for more formal systems is an empirical question. In a current working paper, I add to a small but growing body of evidence that suggests informal mechanisms provide at most an imperfect substitute: faster courts do encourage faster growth (Amirapu 2016). The Chief Justice is right.

Given the severity of the problem, it is worth asking: do firms even use courts in India? According to 2005 World Bank Enterprise Survey data, they do: about 12.5% of firms in the survey were involved in court cases over the period 2001-2004, and about 22.5% of firms report poor contract enforcement as a constraint to doing business (Ahsan 2013). As the data suggest, even firms that do not take cases to court may be impacted by court efficiency because the formal court system can represent an outside option that influences how firms behave, even if they never wind up there.

Though bad on average, there is, however, considerable variation in measures of court efficiency across Indian states. For example, Figure 1 displays the geographic variation in my primary measure of court efficiency, the share of trials in district/sessions courts that were resolved in less than one year in 1999. The proximate causes for this geographic variation are likely differences in judicial strength - which is decided by state governments - and rates of disposal - which may be a function of different legal norms and procedures (Singh 2003, Mookherjee 1993). Other sources of variation may have their roots further back in time, since much of India's legal system has been inherited from the pre-Independence era. Though it is an important matter of independent interest, fully explaining the sources of variation is beyond the scope of my paper and is not strictly necessary for the present analysis. 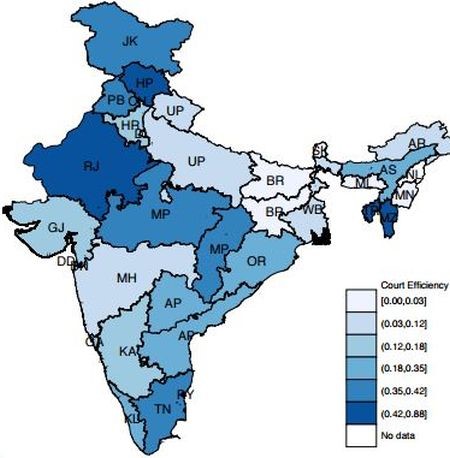 Notes: (i) This figure displays a map of court efficiency across Indian states, with darker blue representing more efficient courts. (ii) Court efficiency is measured as the fraction of cases that are resolved within one year in the states' district/sessions courts in 1999.
Data Source: National Crime Records Bureau (NCRB) (1999).

Demonstrating the link between slow courts and economic outcomes

Why should slow courts be detrimental to economic outcomes? Chief Justice Thakur's quote clearly lays out the economic reasoning: slow courts increase the cost of enforcing contracts by delaying the payoff of taking an agent to court. If contracts are costly to enforce because cases take years or even decades to resolve, parties may avoid making investments or engaging in potentially surplus-generating transactions (Williamson 1979). This should be all the more true of transactions that only have value within a specific buyer-supplier relationship, such as the purchase or production of specially tailored intermediate inputs (example, branded shoe parts). Such relationship-specific transactions have a greater need for reliable contract enforcement, because if one or the other party doesn't abide by the rules of the contract, the input has no resale value. This is not the case for non-relationship-specific inputs (example, lead), which can be sold on a market to other parties if an agreement with a particular buyer breaks down.2 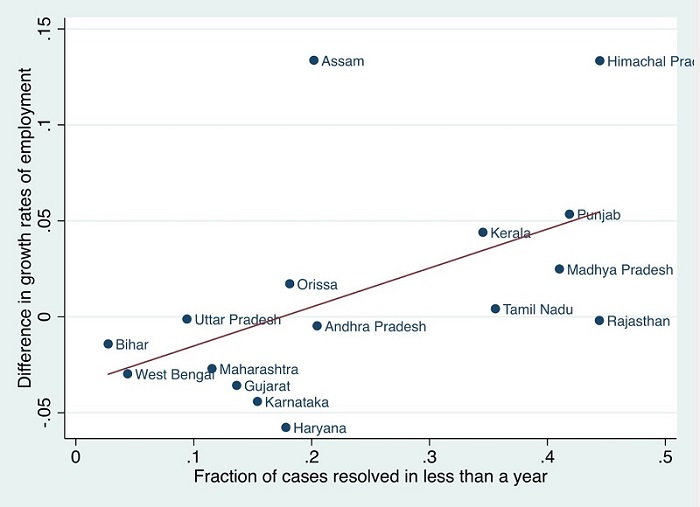 Notes: (i) This figure displays the difference in average employment growth rates between contract-intensive industries and non contract-intensive industries (vertical axis) plotted against court efficiency (horizontal axis) for major Indian states. (ii) Court efficiency is measured as the fraction of cases that are resolved within one year in district/sessions courts in 1999. (iii) This figure is based on a similar one in Rajan and Subramanian (2011). I thank Arvind Subramanian for the suggestion.
Data Sources: Annual Survey of Industries (ASI) (1998-09 to 2007-08); NCRB (1999); Nunn (2007).

The hypothesis is also confirmed by formal statistical tests. I find a large and statistically significant positive association between growth in a variety of different measures of industrial outcomes and the interaction between state-level court efficiency and industry-level contract intensity. The results suggest that, for an industry in the 75th percentile3 of contract intensity, an improvement of one standard deviation4 in court efficiency would imply a higher annual growth rate of gross value added of 0.9 percentage points. This is a very large effect, since the average annual growth rate in the sample is 2% per year. Similar results hold for growth in employment, profits and net entry of factories, where all outcome variables are taken from the Annual Survey of Industries (ASI) and represent the entire formal manufacturing sector from 1999 to 2008.

One might ask: why focus on this interaction? Why not simply compare the growth performances of states with fast courts against states with slow courts? The reason is that states with faster courts will be different in a host of ways that may also affect economic performance but which may be left out of the analysis. In contrast, I show that states with faster courts experience faster growth, not only in general but especially in precisely those kinds of industries that need fast courts, just as the economic theory would predict. This result is harder to explain by omitted factors, because the omitted factors must vary by state and industry in a particular way in order to influence the results. Nevertheless, I include a large number of additional tests to provide further confidence in the hypothesised mechanism. For example, I show that replicating the analysis using the efficiency of criminal courts rather than the efficiency of civil courts does not have the same effect on growth. This demonstrates that if the results are being driven by some omitted factor, it must be something that is uniquely correlated with the efficiency of civil courts but not with the efficiency of criminal courts, which makes it less likely still.

A small but growing body of evidence

My paper's findings add to a small but growing literature on the role of legal institutions in development.5 In addition to the cross-country papers mentioned above by Berkowitz et al. (2006), Levchenko (2007), Nunn (2007) and Acemoglu and Robinson (2005), there are a few other within-country studies on the topic, including some that focus on India. Visaria (2009) shows that the introduction of tribunals to speed up the debt recovery process in India resulted in lower costs of borrowing - although Lilienfeld-Toal et al. (2012) show that the same reform adversely affected the credit access of small borrowers. Chemin (2012) argues that an amendment to the Code of Civil Procedure in 2002 succeeded in speeding up courts and inducing investment by small, unorganised firms. Ahsan (2013) presents evidence that faster courts were important in passing on the productivity benefits of trade liberalisation.

There is also a growing literature on the important interactions that can occur between formal and informal mechanisms of contract enforcement. For example, Aldashev et al. (2012) provide a theoretical model of such interactions in which changes in the formal law can exert a beneficial effect on regressive informal customs under certain conditions. In a current working paper Chakraborty et al. (2016) argue that improvements in formal contracting mechanisms can disproportionately help underprivileged entrepreneurs, because formal judicial institutions can be a substitute for informal community-based sanctions, and members of underprivileged social groups tend to have smaller commercial networks and can therefore make less use of the informal mechanisms.

In this column I demonstrate that slow courts are a serious problem for India's economic development. What is less clear is how to solve the problem. Mookherjee (1993), Singh (2003) and Debroy (2008) provide diagnoses that seem no less relevant today than when they were written. The problems they flag include numerous and long-unfulfilled judicial vacancies, slow growth of new posts, poor case management and antiquated procedures. More recently, the non-profit research agency DAKSH released a wide-ranging report on the “State of the Indian Judiciary” which reiterates these and further issues (including the computerisation of court records and the reformation of judicial administration). Whether such changes will be made and whether they will have the desired effect remains to be seen. What is more clear is that until courts can be sped up, India's industries will run more slowly too.