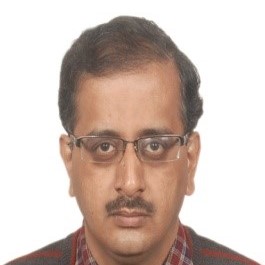 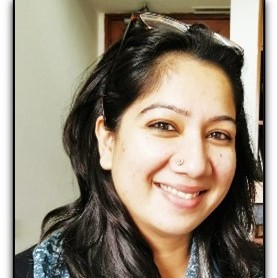 Food and agricultural prices have been rising over the past two years – particularly so for pulses and livestock. In this post, Saini and Das track livestock and feed prices, and identify the key drivers of the recent increases. In their view, policy responses in the form of imports could have been timelier if official data on production were more reliable and robust.

India’s consumer price index (CPI) has been rising in the recent years. This is particularly the case for food and agriculture, with pulses and livestock prices increasing exceptionally.

In this post, we track average livestock prices (mainly of poultry) across major consumption centres in the country over the last one year, and identify major causes of the recent increase in prices. Further, we outline the policy responses of government, and highlight a gap in this regard.

Price trends in the livestock sector

Compared to 2020, in August 2021, the CPI of eggs, and meat and fish increased by about 16.3% and 9.2%, respectively (Figure 1). As per National Egg Coordination Committee (NECC) data for Delhi, the price of eggs went up by around Rs. 0.26 to 0.45 per egg between 2020 and 2021. Poultry meat prices have also been high during this period. In Delhi, poultry meat that retailed at about Rs. 140 per kilogram (kg) in 2020 was sold at Rs. 220 per kg, a year later in 2021. Milk has also become more expensive with retailers like Amul, Mother Dairy and others, raising retail prices by Rs. 2 per litre. Unlike other commodities, CPI of milk has the unique characteristic of rising secularly each year. Annually, the CPI of milk rose at an average rate of about 3% from January 2016 to November 2019. However, between December 2019 and February 2021, the CPI of milk has risen sharply at an average rate of about 5.5%. In 2021, milk prices have been building up on this higher base. 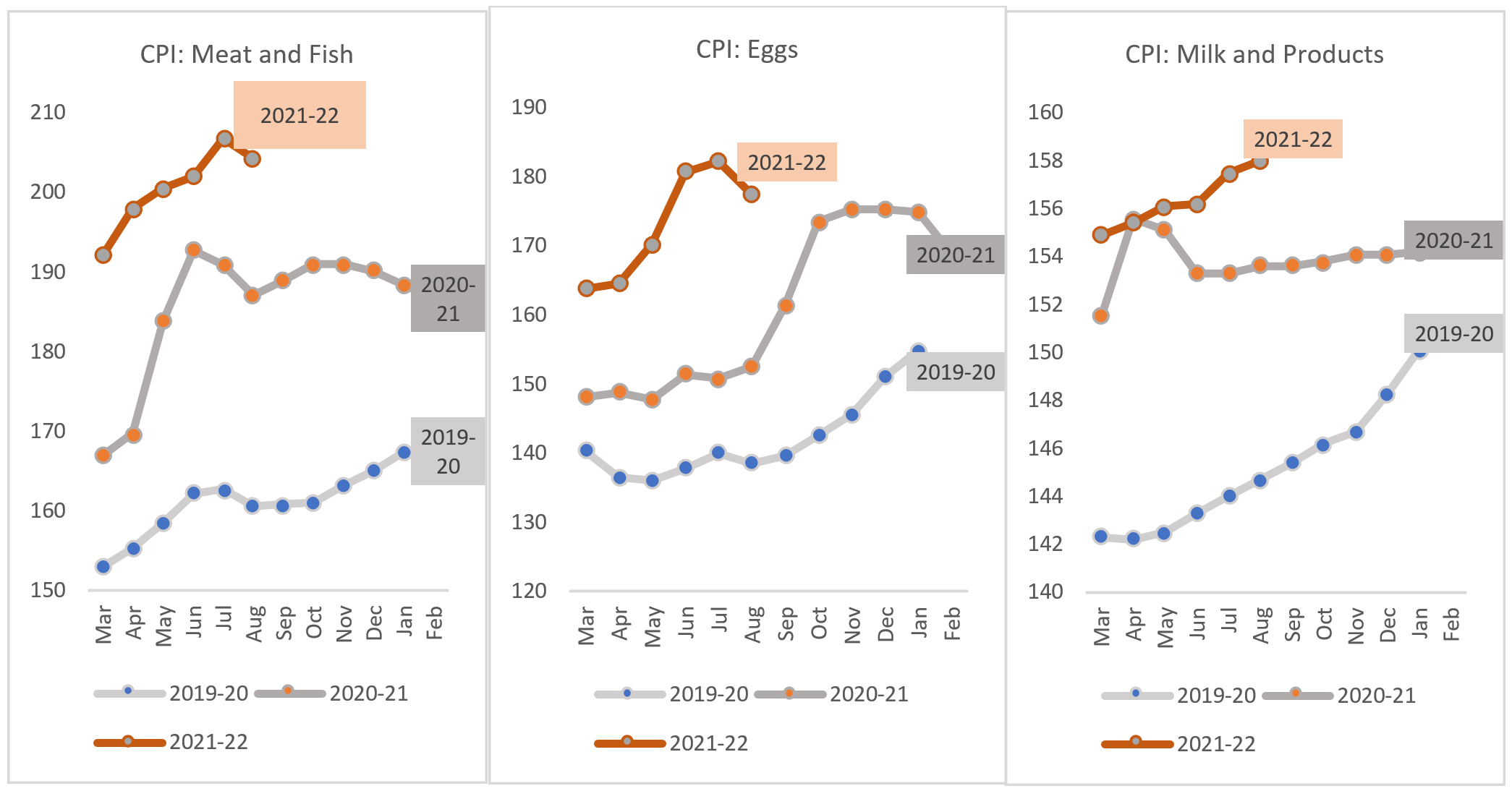 Headline CPI inflation plateaued in May-June 2021 at about 6.3%, but reached a moderate level of about 5.6% in July and 5.3% in August 2021. During the same time, inflation in food (CFPI) that averaged about 5% in May-June 2021, reached approximately 4% in July and 3.1% in August 2021. Among food items, pressures from the livestock sector1 continued to push prices upwards: in July 2021, livestock contributed to about 33.9% of food inflation.

Poultry has been facing pressure on both the supply and the demand side (Figure 2). Since the start of the Covid-19 pandemic, doctors have been encouraging recovering patients to consume a higher amount of proteins as part of their diets, thereby pushing up the demand for eggs and meat. On the supply side, higher prices of feed and crude oil are inflating costs of production and movement, pulling up overall prices. 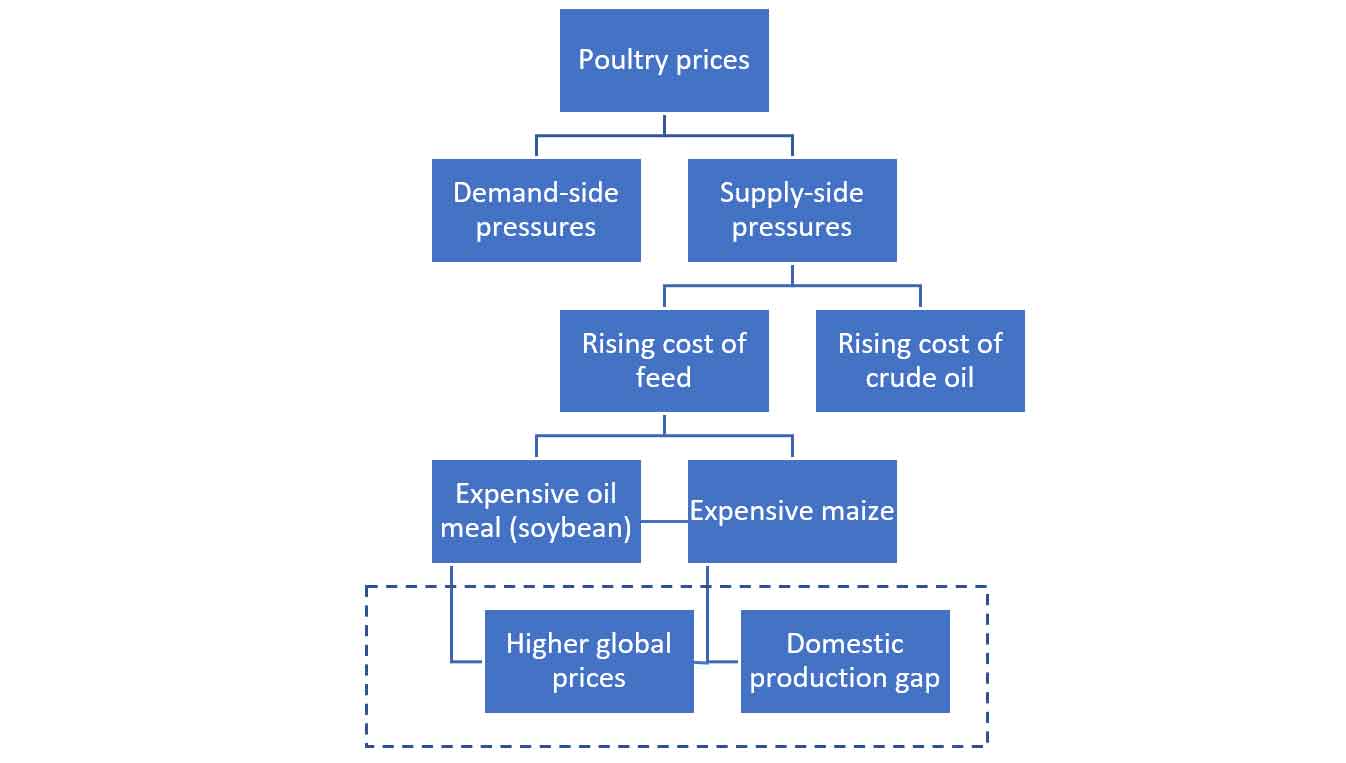 The cost of feed constitutes around 60-70% of the production cost of broiler meat and eggs. In August 2021, there was a sharp spike in the feed prices, pushing up cost of production. The higher prices of feed were largely due to soybean meal becoming expensive. This meal – also referred to as de-oiled soy cake – is one of the most critical sources of protein in animal feed used in the livestock sector, and is among the by-products of the extraction process of soybean edible oil.

Maize, which is another important component of feed for poultry, has also become expensive this year. From about Rs. 11.45 per kg in August 2020, wholesale prices of maize in Madhya Pradesh – considered as benchmark prices for the country – increased by about 42% to Rs. 16.3 per kg in August 2021.

The biggest reason for this price rise is the lower availability of the two crops in the domestic markets. As per Government of India’s fourth advance estimate released by the Ministry of Agriculture and Farmers Welfare (MOA) in August 2021, production of both maize and soybean has been higher in 2021 as compared to 2020. What then reduced the domestic availability? To some extent, this is on account of extremely high levels of exports coupled with lower domestic production.

These exports grew because of the very high global prices (Figure 4). 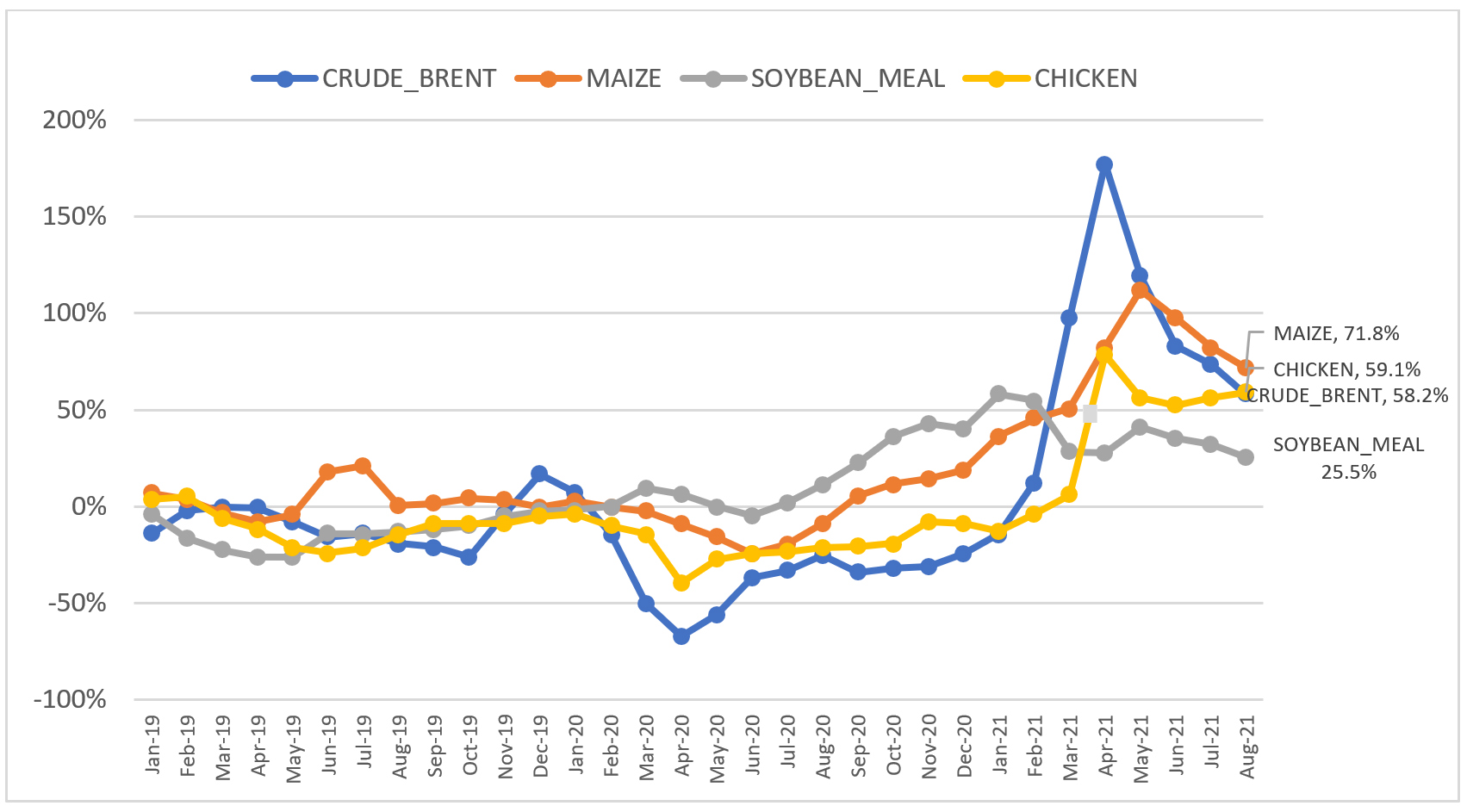 The prices of maize have been moderating on a month-on-month basis. However, soybean meal prices continue to be very high. Sensing a domestic supply crisis, which could impact the livestock sector adversely as the kharif2 crop of soybean would only start arriving in the market by November 2021, the government allowed the import of soybean meal for the first time in recent years. The government approved the import of 1.2 MMT of genetically modified (GM) soybean meal (crushed and de-oiled soy cake)3. This import is allowed until 31 January 2022, although the import orders have to be placed by 31 October 2021.

Following this notification allowing imports, poultry feed manufacturers and traders began importing soybean meal from Vietnam and Bangladesh. Until mid-September 2021, about 0.2 MMT of soymeal have been imported. Higher availability is expected to dampen the price pressures in poultry. According to estimates based on market intelligence from the Poultry Federation of India, the feed cost in poultry declined from Rs. 46,000 per tonne in August 2021 to around Rs. 42,000 per tonne by the end of September 2021, and is expected to further go down to around Rs. 36,000 per tonne by October 2021. The decline in feed prices is expected to provide relief to broiler and layer bird farm owners by reducing their cost of production of poultry meat and eggs. This is likely to temper the prices of both eggs and meat at the retail level.

Now the question is, if the domestic production of soybean, for example, was as high this year as is indicated by the government in its fourth advance estimate, then why is there such panic in the system, and why did the government have to allow the import of soybean meal on such an emergency basis?

One of the reasons for this can be seen in the data on production: official data differs from that released by trade or market sources, and the former seems to overestimate production. As per the government’s fourth advance estimate released by MOA, 12.9 MMT of soybean have been produced in the country in 2021 so far. This was around 15% higher than 11.2 MMT in 2019-20. As soybean is a critical element of feed for fisheries and the animal husbandry industry, its production is also monitored by the Ministry of Fisheries, Animal Husbandry, and Dairying. As per this Ministry, production of soybean in 2020-21 was around 12.2 MMT. This was marginally lower than MOA’s estimate. However, as per industry estimates from SOPA, soybean production in 2020-21 was only 10.5 MMT, which is much lower than the government estimates from both the ministries. In fact, according to SOPA estimates, it appears that soybean production in 2021 is lower than 2020.

It was no surprise that the industry and other players including the traders, processors, etc., anticipated the shortfall in soybean meal supply and pursued the government to allow its import. By finally allowing imports, did the government also tacitly acknowledge the error in its own production data? Was the government estimate of production optimistic? Why did the two government ministries give out separate numbers on production, both of which were significantly different from the industry’s estimate?

A similar situation is seen in the case of pulses today. Despite an annual increase in production as per the fourth advance estimate, prices of pulses like masur (lentils), gram (chickpeas) and tur (pigeon peas) rose sharply this year. To dampen the building price pressures, the government undertook a series of policy measures, including the imposition of the Essential Commodities Act, easing of imports, offloading of NAFED’s (National Agricultural Cooperative Marketing Federation of India) stock of pulses. Again, it appears that the government’s production estimates were a little too optimistic and private trade preempted the deficit in supply much earlier in the year, and more accurately.

Although the government’s timely policy response on rising livestock prices is commendable, it is possible that the situation may have been better if the government’s estimate of production were more accurate and realistic. A more accurate prediction of data on production would have helped the government to pre-empt upcoming deficits in supplies and this would have earned them more time to plan their responses better. Trade policies could have been monitored to predict domestic supply deficits and import could have been better planned. Currently, the imported soybean meal is likely to enter the markets together with the domestic harvest of the new soybean crop. These imports are likely to depress the market prices for the farmers.

Unless the government has access to credible and robust data on production, its policy responses will continue to retain an ad-hoc and knee-jerk character. Creating a credible supply of production data of crops is critical for any government. This will help everyone in the value chain by stabilising prices and supplies.