The current consensus that the finance-growth nexus is more complex than previously assumed has led to concerns about ‘too much finance’. Using a large panel dataset over six decades, this article finds some evidence of a detrimental effect of ‘too much finance’, but not for highly financially developed countries or for the long-term growth trajectories of countries with intermediate levels of financial development.

In the aftermath of the Global Financial Crisis, the literature on finance and growth experienced a 'paradigm shift' whereby a pre-Crisis consensus of a strictly positive and linear relationship (for example, Beck et al. 2000, Levine et al. 2000, Beck et al. 2004, Levine 2005) was replaced by a new consensus of a more complex, likely concave relationship – economies could experience ‘too much of a good thing’. The influential work by Arcand et al. (2015), among others, established the presence of such a non-linearity at the top of the financial development distribution (Arcand et al. 2011, Beck 2015, Beck et al. 2013, Beck 2013).

The 'darker side' of financial development (Loayza et al. 2018) can occur if increased deepening of advanced financial markets: (a) furthers services with lower growth potential (for example, household rather than firm credit); (b) leads to a misallocation of talent (for example, a 'brain drain' to financial services); and/or (c) results in an increased vulnerability to financial crises. The latest is the subject of a large separate literature (Sufi and Taylor 2021) with a "near-consensus view" (Bordo and Meissner 2016) that banking crises are "credit booms gone bust" (Schularick and Taylor 2012, Schularick and Taylor 2009), although capital flow bonanzas also feature prominently as crisis triggers1 (Reinhart and Rogoff 2013, Ghosh et al. 2014, Caballero 2016, Reinhart and Reinhart 2008, Ghosh and Qureshi 2012).

In a recent study (Cho et al. 2022), we revisit the implications of potentially 'excessive' levels of financial development, proxied by private credit/GDP (gross domestic product), for economic prosperity in the long run and susceptibility to banking crises in the short run. Our empirical setup departs from much of the existing literature in four ways: first, we think of 'too much finance' as being above some threshold for credit/GDP (we adopt 92% and 119%) and study the 'treatment' effect of being in this 'danger zone' relative to the growth experience of countries which permanently remained below the threshold2. Second, we estimate the treatment effect at the country level, which enables us to consider the length of time countries have spent in the 'danger zone'. If excessive levels of finance are detrimental to prosperity, we would expect this effect to be more pronounced in countries with many years of 'too much finance'. Third, we extend our analysis to the study of banking crises. If 'too much finance' triggers banking crises, we would expect that the dominant triggers in the literature play a prominent role. Hence, we ask whether within the same country, credit booms, unfettered capital inflows, and commodity price movements induce a stronger effect on crisis propensity above, relative to below a 'too much finance' threshold. And finally, motivated by descriptive analysis, we investigate these matters not just in advanced economies at the top of the credit/GDP distribution, but also in emerging economies at intermediate levels.

Financial development and economic growth in the long run

Figure 1 presents results from our treatment effects models for 'too much finance'. On the vertical axis, we chart the magnitude of the economic effect (in percentage), and on the horizontal axis, the number of years a country has spent in the 'danger zone'. We use local linear regression to smooth the individual effects relative to the years of treatment, and these smoothed predictions are presented here. The economic effects are derived from difference-in-differences3 regressions. The different lines within each plot are for alternative control samples – curtailing the control sample moves the 'counterfactual' closer to the treated sample in terms of shared characteristics4. The markers indicate individual country estimates. If a marker is filled (hollow), we can(not) reject the null hypothesis that the effect is zero for countries with this number of years of 'too much finance'. The top panel is for a 92% credit or GDP threshold, and the bottom panel is for 119%. These are the 90th (includes 39 countries) and 95th (includes 25 countries) percentiles, respectively of the credit/GDP distribution in our full sample of 152 countries over 1960 to 20165.

Figure 1. The long-run growth effects of 'too much finance', threshold effect of 92% credit/GDP (top panel) and 119% credit/GDP (bottom panel) 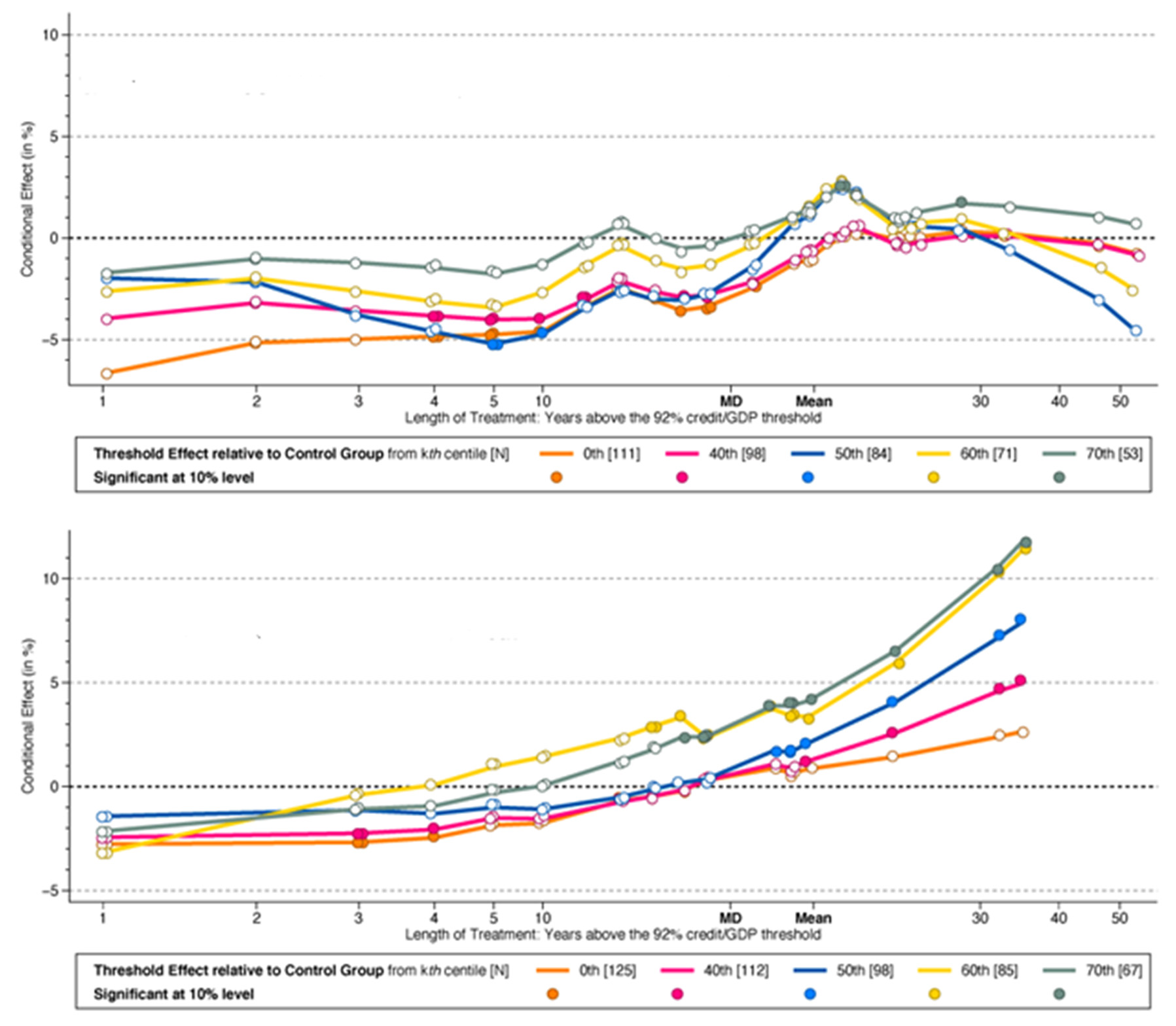 Notes: (i) The plots present the smoothed country estimates from Chan and Kwok's (2021) PCDID regressions of per capita GDP (in logs) on a dummy for 'too much finance' (92% or 119% credit/GDP threshold) and additional control variables as well as estimated factors extracted from the control sample via Principal Component Analysis, For more details see Cho et al. (2022). (ii) These are the results for the models augmented with four estimated common factors. (iii) The different lines in each plot represent different control samples with sample size indicated in each case. (iv) The treatment sample is the same within each panel, as stated. (v) Filled (hollow) markers indicate a statistically (in)significant difference from zero. (vi) Markers are minimally perturbed for ease of visual presentation. (vii) The horizontal axis is transformed using the inverse hyperbolic sine function. (viii) The sample mean and median years of treatment are highlighted in the axis labels.

While for the 92% threshold, many years of 'treatment' are associated with negative effects, very few of these are statistically significant, and the results for more restricted control samples are of very small magnitude compared with those adopting an indiscriminate control sample6. For the median and mean number of years in the 'danger zone' the results for the most restricted control samples (yellow and teal lines) indicate statistically insignificant, marginally negative, and marginally positive effects, respectively – for the average country in the 'danger zone' such high levels of financial development did not yield higher growth but did no harm either. In the 119% threshold figure, we see a different, upward-sloping relationship with time spent in the 'danger zone'. Here, even the most indiscriminative control sample suggests the average country (median or mean of years above the threshold) experienced a positive effect, and for more restrictive control samples, this effect is statistically significant and rising with time. A conservative interpretation of these results is that there is no evidence of a large and statistically significant negative long-run effect of 'too much finance' on economic prosperity.

In Figure 2, we present some of the results of emerging economies, where the 'too much finance' narrative is investigated adopting the 34-65% and 47-92% credit/GDP ranges (60th-80th and 70th-90th percentiles of the credit/GDP distribution). We define ranges of values since we want to avoid countries like Singapore – which moved from 33% to 135% credit/GDP – being included in the treatment sample. In both panels, the treatment effects for the country with the median number of years in the 'danger zone' are positive, albeit statistically insignificant. For the most part, treatment effects remain positive and even rise with additional years. Again, at the very least, these results suggest that there is no evidence for a significant detrimental effect on long-run prosperity in this sample of emerging economies. 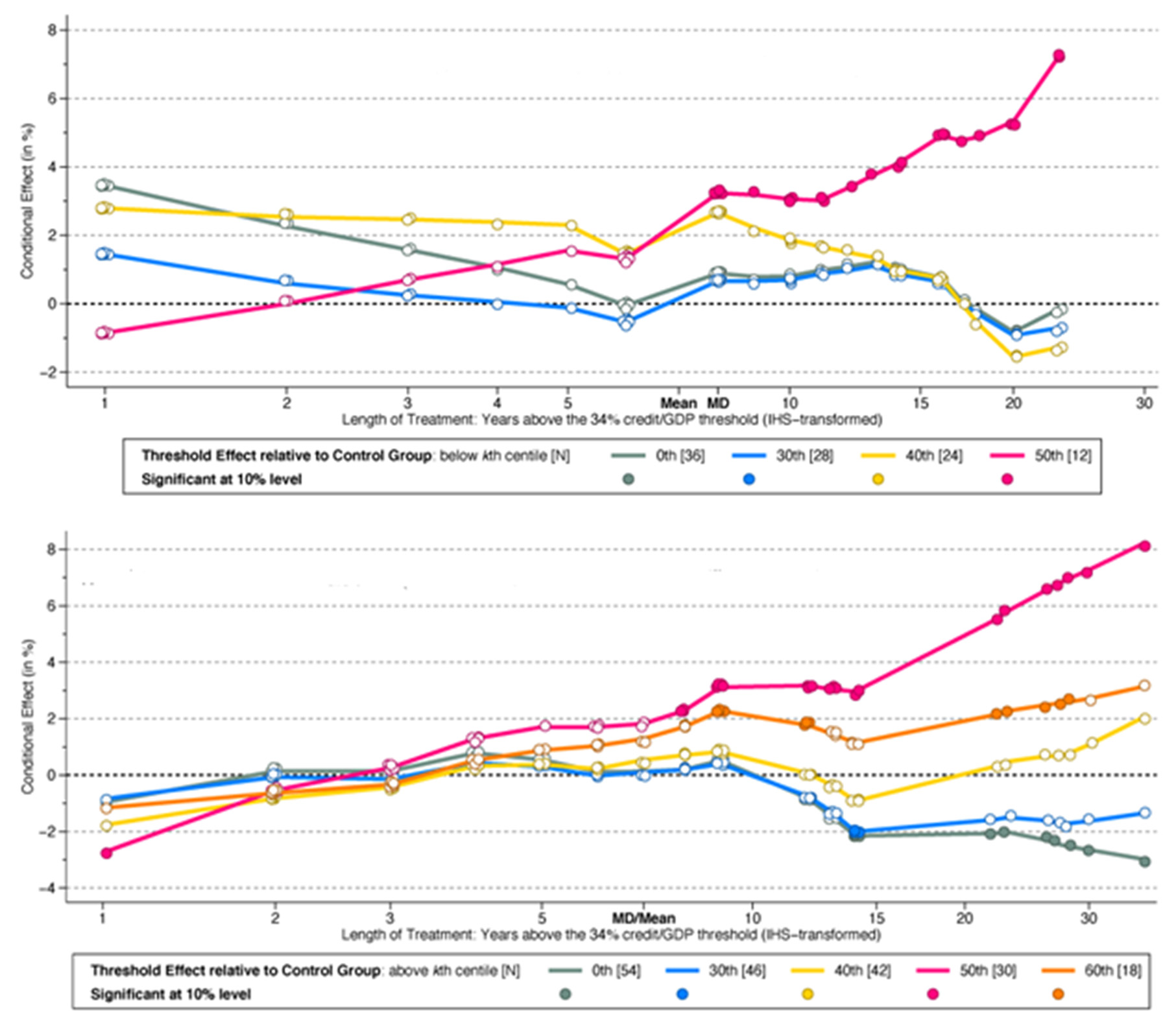 Notes: (i) These plots adapt the notion of ‘too much finance’ to the emerging economy context. (ii) In the upper panel, this is defined as a credit/GDP ratio between 34% and 65% (60th and 80th percentiles of the distribution; 42 countries), in the lower panel between 47% and 92% (70th and 90th percentiles; 47 countries). (iii) The most restrictive control samples are now for the plots in yellow, pink, and orange. See Figure 1 notes for other details.

Our empirical analysis of banking crises uses interaction effects to investigate whether within countries, salient crisis triggers such as credit booms, unfettered capital inflows, and aggregate commodity prices have stronger effects when countries are above the 'too much finance' threshold. We begin, however, by ignoring this distinction to demonstrate that these 'dominant narratives' play an important role in triggering banking crises, in our samples for advanced and emerging economies.

The patterns we establish using the 92% threshold suggest that credit booms and large capital inflows increase crisis propensity below the threshold, while the coefficients on the interaction terms are frequently negative, implying lower crisis propensity above the threshold. While the interaction terms for credit growth using the 119% threshold indicate a higher propensity for banking crises, these results are very imprecise and never statistically significant. In the capital flow analysis, we once again detect a weak pattern of higher crisis propensity below the 'danger zone'. The notion of differential (and stronger) effects, within countries above relative to below the 'too much finance' thresholds, is hence not supported in the data.

In the investigation of the 34-65% and 47-92% ranges for 'too much finance' in emerging economies, we can again detect the credit boom and also an aggregate commodity price effect if we ignore thresholds. The evidence using interaction terms suggests that capital inflows and commodity price movements have an amplified effect when countries have high levels of financial development. These results are statistically weak but more suggestive of a detrimental effect than those in the advanced country sample.

What remains of the 'too much finance' narrative?

Until fairly recently, there was relatively little doubt in the literature about the economic benefits from financial development. The experience of the Global Financial Crisis then led to renewed research activity resulting in the suggestion that economies could experience ‘too much of a good thing’. Now, a non-linearity in the finance-growth relationship is the new consensus in the literature.

We challenge this conclusion by analysing the finance-growth relationship with: (i) more flexible empirical specifications embedded within a causal treatment effects framework; (ii) a focus on country-specific effects, treatment length, and hence the long-run equilibrium relationship; and (iii) a methodological extension to study the impact of finance on the dominant banking crisis determinants in an early warning system approach which focusses on the short-run. We find no convincing evidence that highly financially developed countries experience lower economic growth or are more susceptible to systemic banking crises once they cross a certain threshold. In a sample of countries with intermediate levels of financial development, we find statistically weak evidence for a detrimental effect on financial vulnerability. No matter how (in)substantial this increased vulnerability to banking crises may be, these short-run implications of financial development do not hamper growth in the medium to long term. Hence, what remains of the 'too much finance' narrative? We would argue that for advanced and emerging economies, there simply is no evidence of any significant detrimental effect.

The great disinflation in emerging and developing economies