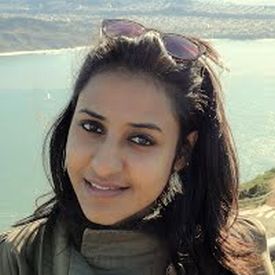 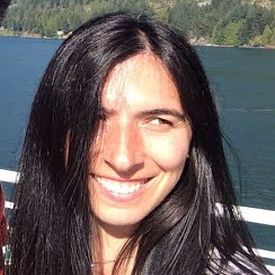 Lifetime risk of maternal death in developing countries is 33 times higher as compared to the developed world. This article examines the role of cultural norms in influencing maternal morbidity and mortality. It finds that, in societies with a strong cultural preference for sons and generally poor reproductive health conditions, women with a first-born girl are more likely to suffer from anaemia, and less likely to survive to older ages, relative to those with a first-born boy.

An estimated global total of 10.7 million women died from maternal causes in the 25 years between 1990 and 2015. Nearly all of these deaths were concentrated in developing countries (mainly in sub-Saharan Africa and South Asia), where the lifetime risk of maternal death is, on average, about 33 times higher than in the developed region (World Health Organization (WHO), 2015).1

In recent research (Agarwal and Milazzo 2019), we study the role of cultural factors in influencing maternal morbidity and mortality in the developing world. Our main focus is on son preference. Previous work for India suggests that, compared to women with first-born sons, women with first-born daughters are more likely to be anaemic and appear to have lower likelihood of survival. This is, at least partially, because son preference induces these women into fertility behaviours that are medically known to be associated with a higher risk of maternal morbidity and mortality (Milazzo 2018). We then ask a cross-cultural question: if son preference and the harmful fertility behaviours that follow the birth of a daughter are indeed partly responsible for the high mortality of Indian women, then, is the higher morbidity and the decline in survival into older ages especially pronounced in countries with high son preference and poorer overall maternal health conditions? And what are other socioeconomic and cultural determinants of such a decline in the survival of women with first-born girls across countries?

In an attempt to answer these questions, we use data from 218 demographic and health surveys covering 74 countries – facing different intensities of son preference and maternal health conditions – between 1990 and 2015.

Figure 1. Share of women with first-born girl declines the most with women’s age in areas with both high son preference and high maternal mortality risk 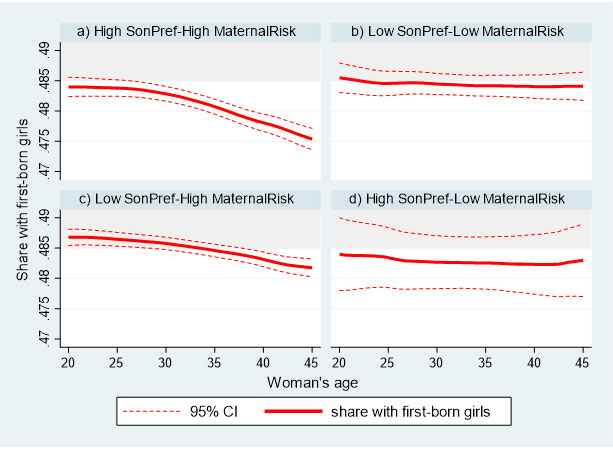 We also find that the declining trend in the share of women with a first-born girl who survive to older ages, is concentrated among those of lower socioeconomic status who likely have limited access to healthcare, and are thus more vulnerable to experience harmful health consequences.

Next, we turn our attention to women’s morbidity, specifically anaemia – an indirect cause of maternal mortality.4  Figure 2 shows that in places with high son preference and high maternal mortality risk, women with a first-born girl are more likely to be anaemic compared to women with a first-born boy, after their first child’s birth. Importantly, there is no differential incidence of anaemia immediately after birth. This is consistent with the idea that women with a first-born girl engage in fertility behaviours that are medically known to increase the risk of maternal morbidity and mortality after the birth of their first child. Moreover, the anaemia patterns for the remaining three country-year groups do not reveal any significant differences by the first child’s sex. 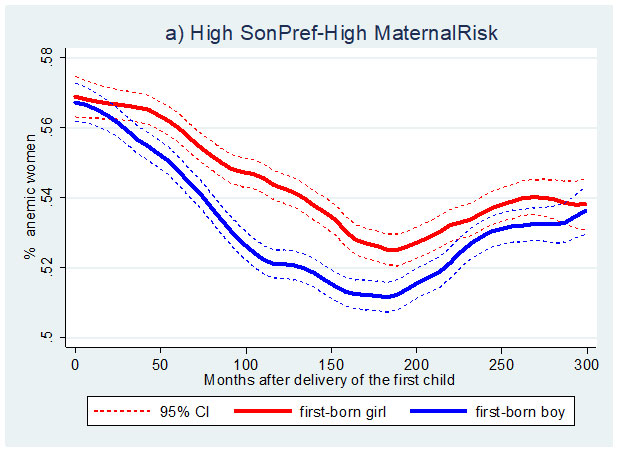 Summarising the decline in the share of women, by their first child’s sex

Socioeconomic and cultural correlates of imbalance

Having a single summary indicator of imbalance allows us to study its association with multiple factors across countries. We find several significant correlations. Economic factors, such as greater urbanisation and a lower gender gap in school enrolment, are both associated with a lower probability of imbalance. On the health front, as expected, a higher proportion of skilled birth attendance(indicating better provision of reproductive healthcare services) is negatively associated with imbalance. A higher prevalence of anaemia has a strong positive correlation with the likelihood of imbalance in a country-year, reinforcing our earlier findings on anaemia.

Finally, as expected, we find strong evidence of the joint positive effect of son preference and maternal mortality risk on the likelihood of imbalance, which persists even after we control for a host of economic, health, cultural, and historical correlates of imbalance. In terms of changes over time, our first investigation does not reveal any evidence that the outcomes examined are worsening, but also not improving, for women with first-born girls.