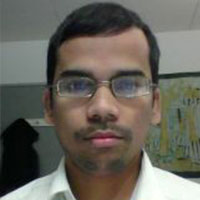 There is significant anecdotal evidence for the fact that local political connections at the grassroots level is an important channel through which leakages take place in welfare schemes in India such as the PDS. Analysing data from a nationally representative household survey, this column finds that politically-connected households are more likely to be allocated a BPL card - a gateway to obtaining various benefits from the government.

Recently, there has been a spurt in news reports on rampant fraud in the allocation of an important poverty-alleviating entitlement called the below-poverty-line (BPL) ration cards in different parts of the country (for example, in Karnataka, Chhattisgarh, Odisha, Delhi etc.) leading to ruckus in political and governance circles. Even in poor states like Odisha, some senior political executives have had to resign from their offices upon media revelations of them keeping a ration card in their names. The news reports have detailed how local political capture of the BPL cards has been at the forefront of executive corruption at the grassroots level.

Targeted public transfer programmes in the developing country contexts are fraught with myriad examples of clientelism1 and political elite capture (Lanjouw and Ravallion 1999, Besley, Pande and Rao 2012, Caeyers and Dercon 2012, Alatas et al. 2013). The literature is flush with empirical evidence of experiences of corruption and leakages in India’s Public Distribution System (PDS)2in recent years (example, Khera 2008, 2011). Apart from the pilferage in the implementation of the programme, the PDS targeting was also flawed at the outset: a host of papers published in the Economic and Political Weekly and elsewhere have shown that the government’s 2002 BPL Census used for the identification of beneficiaries was subject to widespread inclusion errors (richer households with a BPL card) and exclusion errors (poor households without a BPL card), low data quality and coverage, imprecise scoring methods, and poor survey design.

Across the country, we have a lot of anecdotal evidence for the fact that an important channel through which leakages usually take place in public welfare schemes like PDS is the role of local political connections at the grassroots level. Households connected to local political executives are more likely to be identified as ‘poor’ and selected into welfare programmes than the unconnected households. Richer, politically connected households may have an incentive to get a BPL ration card because the card is not only an important poverty-alleviating entitlement, but also a gateway to various other freebies from the government. In the Indian context, substantive empirical evidence verifying this channel has been sparse (Besley, Pande and Rao 2012).

I find that the predicted probability of obtaining a BPL card for a household connected to a local political executive is a significant 0.035 points higher than that for an unconnected household in the national sample, after controlling for a wide array of factors pertaining to the household (example, social group, household income, family size, electricity in house, house type (pukka/semi-pukka/kachcha), etc.) and to the household head; (example, age, education, gender, permanent/casual job, etc.) and geographic covariates, and correcting for the endogeneity problem.

In rural areas, a politically-connected household is a significant 0.056 points more likely to obtain a BPL card than a household that is not politically connected, while in urban areas, this figure is 0.010. These findings suggest that the beneficiary identification and targeting process for social safety net schemes has been afflicted with local political capture at the decentralised local government level. This is consistent with results of studies like Caeyers and Dercon (2012) in case of rural Ethiopia and Besley, Pande and Rao (2012) in the context of rural south India. 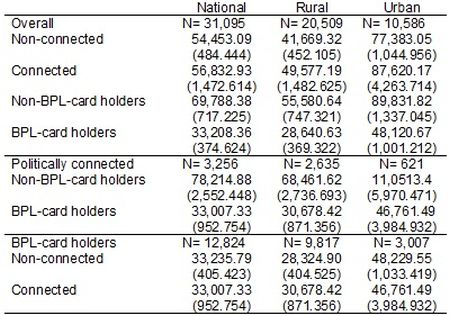 Note: (i) Averages are reported with standard deviations5in brackets.

Why does political capture happen in the first place? Bardhan and Mookherjee (2000) have postulated a set of determinants of political capture such as (i) lack of effective electoral competition resulting from loyalty biases in favour of one party, (ii) electoral uncertainty represented by the variability in voter loyalties, (iii) cohesiveness of special interest groups represented by the class of rich citizens contributing to their lobby, (iv) average level of political awareness, (v) disparity in political awareness levels across economic classes represented by the fractions of voters in different classes who are informed. They postulate that the last two factors explain why political capture increases with illiteracy, poverty, and inequality. Bardhan and Mookherjee (2005) find that political influence replaces bribery as the mechanism for diverting services to local elites under decentralisation. The extent of local capture is likely to be higher in communities with a higher poverty rate. They have also theorised that centralised delivery systems are additionally prone to bureaucratic corruption owing to problems in monitoring bureaucratic performance.

The policy implications of these findings are clear: efficient targeting mechanisms have to be in place so as to iron out local political elite capture in welfare schemes such as the PDS. Economists and policymakers in developing countries have been using two targeting methods, namely, community targeting and proxy means tests (PMT), for quite some time. Community targeting is a procedure in which villagers rank everyone from the richest to the poorest amongst themselves. PMTs are a method wherein household assets are used to predict family consumption. In a 2012 American Economic Review paper that involved a randomised field experiment in 640 Indonesian villages, Alatas et al. have found that community targeting, and the mixture of community targeting and PMTs underperform in identifying the poor relative to using PMTs only - though not by enough to significantly affect poverty-reducing impacts of targeted welfare transfer programmes. However, they contend that elite capture did not explain these results. The elites and their relatives, regardless of their actual income levels, were found to be much less likely to be put on the beneficiary list. While controlling for all variables in the PMT, the community members’ rankings of other households in the village contained information about those households’ per capita consumption, which shows that community members have residual information about consumption beyond that contained in the PMT variables. Furthermore, when Alatas et al. examined how the community survey ranks differed from consumption, they find that communities place greater weight on factors that predict earnings capacity than would be implied by per capita consumption. They argued that the fact of communities employing a different concept of poverty explains why the performance of community targeting might differ from PMT, as well as why it results in higher satisfaction. In a 1999 study on benefit incidence of public schooling and anti-poverty programmes in India, Lanjouw and Ravallion had found early capture by the non-poor. They noted even when public programmes are apparently targeted solely at the poor, non-poor are sometimes able to participate and capture the benefits. This happens when the government cannot target perfectly due to asymmetric information; or that doing so is not a political equilibrium in the sense that the electoral support of the non-poor as an interest group is crucial.

As the implementation of the National Food Security Act6(NFSA) is underway, studying how the targeting under PDS is afflicted with local political capture would enrich our understanding of the programme in its present form, and guide future policy for targeting. Scheme supports such as Aadhaar7could substantially reduce leakages; however, it may not impact political capture. Therefore, methods like community-based targeting should be used to reduce political elite capture in anti-poverty transfers programmes such as the PDS.

Acknowledgement: I am thankful to Ms. Nalini Gulati for her editorial assistance.