The problem of political clientelism becomes imminent in decentralised systems where certain individuals or groups associated with the political party locally in power, get preferential access to scarce public resources. This column investigates the link between political affiliation and/ or activity with the likelihood of receiving benefits under MNREGA, in the state of West Bengal.

Political parties at the local level can be seen as forces of social change. The transfer of power from the centre to elected local authorities is expected to facilitate citizen participation in the decision-making process. However, the problem of political clientelism may surface in the sense that public resources may be allocated to individuals or specific groups, who are associated with the political party locally in power in exchange of support and for running campaigns and rallies to convince voters, some of whom may be swayed by the information and messages they receive from the campaigns (Grossman and Helpman 1996, Stokes 2007). Several studies have also hypothesised that party-based clientelism may be fostered by low levels of economic development and poverty and inequality since such conditions increase the demand for access of public resources (Robinson and Verdier 2002).

A number of scholars have shown party-based clientelism to be prevalent in different parts of India, including West Bengal (Besley et al. 2005, Bardhan et al. 2008, Markussen 2011). In the context of the Mahatma Gandhi National Rural Employment Guarantee Act (MNREGA), I investigate whether households that are associated with the local ruling political party in the village and/ or those that are politically active, have higher chances of getting benefits from local authorities (Das 2013).

The analysis is based on data collected during a field survey in two Blocks of Cooch Behar district1 in the state of West Bengal in early 2012. Two Gram Panchayats (GP) were randomly selected from each of the two Blocks. Two of these GPs were governed by the Left Front government and the other two by the Trinamool Congress, which was the ruling party in the state.

From the four GPs, 556 households were interviewed. The interviews involved questions on their socio-economic and demographic characteristics, as well as information on MNREGA such as number of work days, wages, awareness level etc. Information on whether the household head attends political meetings and/ or participates in political rallies and campaigns was also collected (indicator for whether a household is considered ‘politically active’ or not). Data on political affiliation of the household was recorded as well2 .

Using data from the survey, I investigate if households supporting the local ruling political party and those involved in political activity (irrespective of political affiliation) are more likely to get work under the programme, after seeking for it. Further, I analyse if these households have worked for higher number of days and earned more from MNREGA3 .

Table 1. MNREGA statistics for households, by political affiliation and by activity 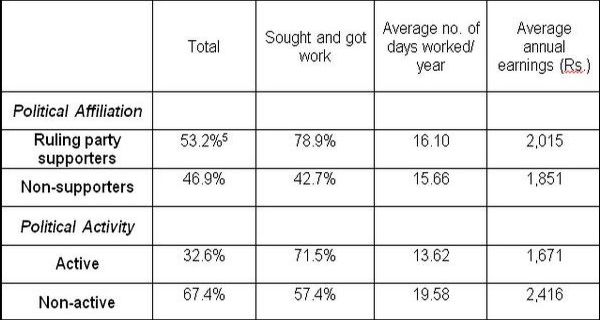 I also find that local ruling party supporters (irrespective of level of political activity) worked for significantly higher number of days under MNREGA and earned more from the programme as compared to those who supported the opposition party. In terms of political activity, active households, (irrespective of the political affiliation) are associated with higher number of days and earnings from the programme as compared to inactive households.

Table 2. MNREGA statistics for households, by interaction of political affiliation and activity 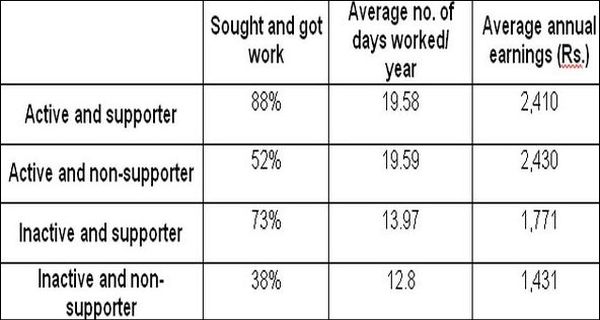 Qualitative evidence and importance of awareness

Focus group discussions and qualitative evidence from the survey revealed information and observations, which closely matched the findings discussed above. For example, during the survey, we found that relatives of the Panchayat head got work for 65 days in 2010, whereas most households in the village got work for 6-12 days (MNREGA website)6.

There are instances where a household’s political leanings affect their MNREGA participation. For example, a domestic helper from the Dakhin Bara haldibari GP who lives with her ailing husband (hence, he is not politically active) and three children, and supports the opposition party, has not received work under MNREGA despite seeking for the last two years. Such instances have been found in other villages as well. In Falimari GP, which is ruled by the Trinamool Congress, the loyal left front supporters have been denied work despite seeking it. For example, an aged man of more than 60 years has been a loyal CPI-M (Communist Party of India – Marxist) supporter since before the party came to power in 1977. His family followed in his footsteps and are strong supporters of the party. The household was not given work under MNREGA in 2011.

The findings seem to suggest that politically active households and supporters of the local ruling party benefit disproportionately more from MNREGA than others. However, I did find exceptions in cases where politically inactive households and those that support the opposition received benefits under the programme. During focus group discussions, many households from the Falimari GP (ruled by Trinamool Congress) reported that the presence of Satmile Satish Club, a community-based organisation that works for disadvantaged groups, has improved implementation of MNREGA through awareness campaigns. It is reported that some villagers in the Haldibari Block (predominantly ruled by the Left Front government) became more aware of the programme through interactions with inhabitants of adjacent villages (also predominantly ruled by the Left government). Notably, I found that television advertisements played an important role in spreading awareness regarding MNREGA.

I find strong prevalence of political clientelism in allocation of benefits under MNREGA in some villages of the Cooch Behar district of West Bengal. According to Markussen (2011), political clientelism is a step better than regressive elite capture and caste-based political dominance, as the pool of political supporters may comprise households of diverse economic/ caste status. Nevertheless, it does not stand well under the standards of a well functioning democracy, especially when considering a right-based programme like MNREGA. As a means to reduce the practice, generating awareness may be viewed as an effective tool. Notably, the problem can also be addressed when the rationing of households under MNREGA is tackled by higher generation of works. In this respect, the recent move by the erstwhile government to widen the scope of permissible works, which includes watershed and agricultural related works, is welcome (Government of India 2012).