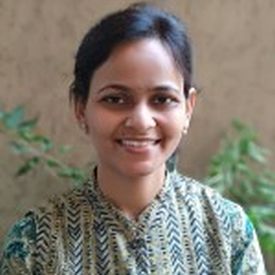 One of the targets in India’s ‘Nationally Determined Contributions’ under the United Nations Framework Convention on Climate Change, is to reduce the greenhouse gas emission intensity of GDP by 33-35% by 2030, from 2005 level. In this post, Manisha Jain examines the differences in data on India’s emission intensity between country reports and third-party sources, and suggests ways to improve official reporting.

India submitted its Intended Nationally Determined Contributions (INDCs) before the COP 21 (Conference of the Parties of the United Nations Framework Convention on Climate Change (UNFCCC)) summit in Paris in 2015. The INDCs outlined the steps that the country intends to undertake to mitigate and adapt to climate change. At the summit, countries adopted the Paris Agreement, and the INDCs are now known as Nationally Determined Contributions (NDCs). There are three quantified targets in India's NDCs on climate change mitigation. The first is the overall target on greenhouse gas (GHG) emission intensity, the second is on the share of power-generation capacity from renewable-energy sources, and the third target relates to increasing afforestation. The first target requires India to reduce GHG emission intensity of its GDP (gross domestic product) by 33-35% by 2030, from the 2005 level (UNFCCC, 2015).

The emission intensity is the aggregate GHG emissions in carbon dioxide equivalent (CO2eq.) divided by the GDP. Countries estimate the inventories of emissions and removals of all GHGs from all sources and sinks in a specific period, to arrive at the aggregate GHG emissions. The GHG inventories form the basis for monitoring the progress of individual countries in reducing emissions. All countries that are parties to the UNFCCC are required to submit GHG inventories. Developed countries are required to publish national inventories every year. However, developing countries are required to publish the inventories in national communications and biennial update reports starting in 2014. The national communications are submitted every four years, and biennial update reports are submitted every two years (UNFCCC, 2019).

India's emission inventories submitted by the government are available for five calendar years – 1994, 2000, 2007, 2010, and 2014. Most recent inventory for 2014 was submitted in the second biennial update report (BUR-2) to UNFCCC in December 2018 (Government of India (GOI), 2018). The base year for India's GHG emission intensity targets is 2005. However, the inventory for the year 2005 is neither published in government reports nor available in the public domain.

The ‘time series’ of aggregate GHG emissions from 2000 to 2014 is available as a bar graph in BUR-2. The bar graph shows emissions of all GHGs estimated in CO2eq. by individual sectors. There are five individual sectors: energy; industrial process and products use (IPPU); agriculture; waste; and land use, land-use change, and forestry (LULUCF). These are the sole time-series data available from government reports. I extracted the data from the bar graph using a web-based tool. The data is shown in Table 1 and plotted in Figure 1. 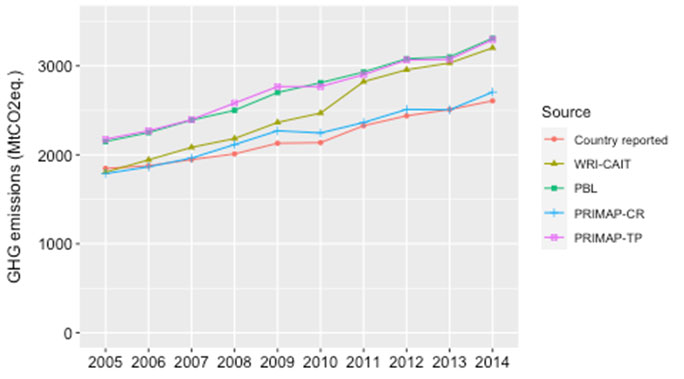 The difference in the estimates of GHG emissions among datasets could be due to differences in assumptions and approximations. Researchers prefer country-reported data to track current progress and future ambitions. The time-series data on emissions from country-reported sources are not available by gases and by sub-sectors in India. For example, the time-series data on CO2 emissions from electricity generation or energy sector are not available in the existing publications. Such data are available for a few selected years excluding 2005. In the absence of country-reported data, researchers use third-party data for sector-specific studies on mitigation efforts. The International Energy Agency (IEA) Data and Statistics is the most commonly used dataset for energy-related CO2 emissions by sectors.

I extracted the data on CO2 emissions from country-reported data and IEA data for the years 2007 and 2014. The values for 2007 are similar in the two datasets but the values for 2014 is 6% higher in IEA data. The discrepancy is more significant in the change in the CO2 emission intensity of GDP (ratio of CO2 emissions to GDP) calculated from the two datasets. The country-reported data shows a decline in CO2 emission intensity of GDP by 4% in 2014 from 2007 levels, and the IEA data shows an increase of 4% during the same period.

The energy-related CO2 emission data are useful in tracking the progress of mitigation efforts in the energy sector (Peters et al. 2017). In the absence of time-series data from country reports, the change in CO2 emissions is analysed using third-party data. However, the third-party estimates of CO2 emissions are higher than country-reported estimates. It is therefore likely that the studies using third-party estimates may not confirm the achievements in terms of mitigation goals claimed in the country reports. Hence, it is crucial that the time-series data on GHG emissions by gases, sources, and sectors be published in government reports. The data for the year 2005 is particularly important, as it is the base year for our goal of climate change mitigation under the Paris Agreement. Nevertheless, following the practices in developed countries, the government should facilitate the annual publication of GHG inventories to improve the tracking and monitoring of our achievements towards mitigating climate change.

Thank you very much. Clearly explained with data. Very useful.