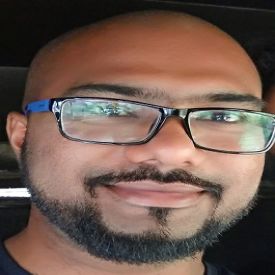 The level of wealth inequality in India is close to that of some highly unequal countries in the world. This article assesses the long-term evolution of wealth inequality in the country for the period 1961-2012, and finds a strong rise in wealth concentration within the top decile of the population. It also explores the changing relationship between class and caste and the mechanisms behind rising inequality.

Economic inequality does not only depend on economic factors, which is evident from the observation that inequality is on the rise in many countries irrespective of their level of economic development. Demographic, social, and political environment also contributes to inequality. There are many examples of this in the world: apartheid in South Africa, legacy of racial discrimination in Brazil, oil in the Middle East – are some non-economic, country-specific issues that have had an impact on inequality. India has its own peculiar caste system since hundreds of years, which is rigidly stratifying the society.

Further, I study the level of inequality along two dimensions:

We see in Figure 1 that urban India is more unequal than rural India, though the increasing trend of inequality is present in both areas. In both urban and rural areas there is a predominance of the share of physical assets in total wealth. Land and building value forms almost 90% of the total wealth in the country, with higher share of building value in total wealth in urban areas. Financial assets comprise only 7% of the total wealth, which is very low compared to developed countries (48.3% in the US and 31% in France). 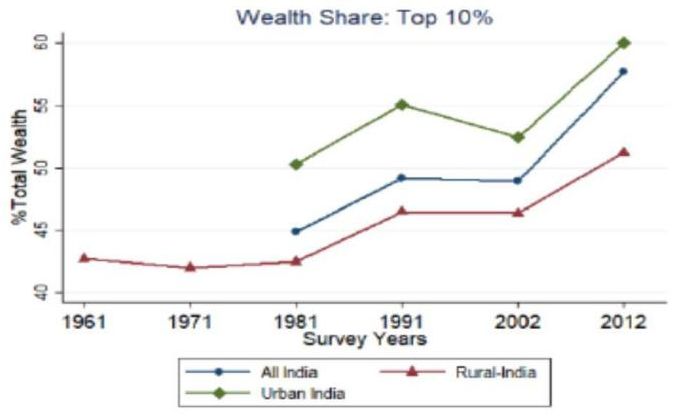 Sources: Estimates are based on NSS All India Debt and Investment Surveys (AIDIS).

The increase in wealth inequality is partly a result of rising income and savings inequality, and partly due to the historical distribution of wealth in the society. Upper castes in most parts of the country have historically been endowed with land, and the improper implementation of land reforms has helped in the persistence of wealth inequalities.

Interplay between class and caste

I rank different caste groups based on socioeconomic outcomes including average income, assets, and highest level of education among males and females. We observe a general pattern where lower-caste groups (SC/STs) are way below the overall averages in each category; OBCs and Muslims are closer to overall average but lower; and FCs are at the higher end. One important thing to notice is the poor education levels among Muslims – and these are in a way ‘forward’ Muslims because SC/STs and OBC Muslims are not a part of this group. One can look at different deciles and the trend remains the same. Another point to note here is the secular gender discrimination against women: the education level of women is lower than men across all caste groups.

There is a sequential and representational inequality in the society. Or, in other words, there is a segregation of FC towards the higher deciles and lower castes towards bottom deciles. 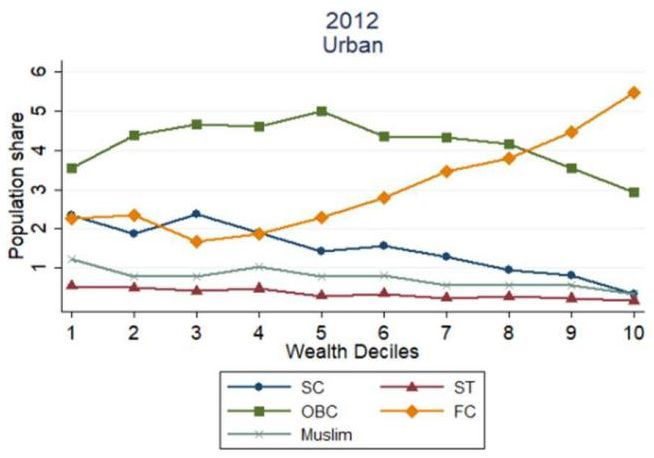 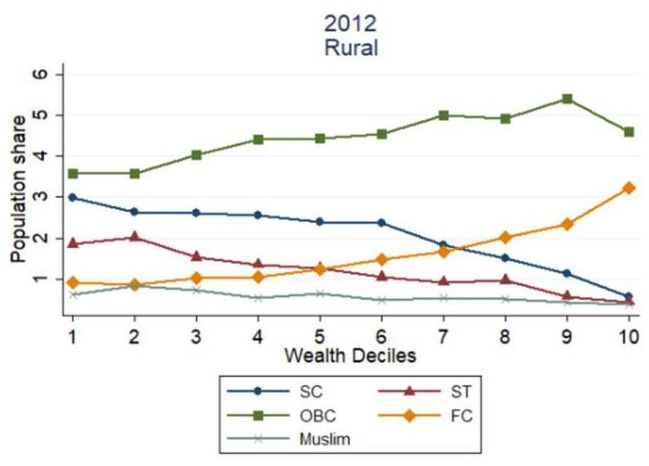 Within caste groups too, economic inequality is very high hinting at heterogeneity (variation) within these big caste groups.

Next, it is crucial to look at inequality within the caste groups because any grouping inherently assumes homogeneity within that caste group. We observe that within every caste group, the wealth share of the top 10% is more than 45%. FC is an outlier with highest within-caste inequality (Figure 3). This points towards the existing heterogeneity within these caste groups and this has increased in recent decades. A repercussion of increasing within-FC inequality is the evolving demand for reservation/quotas from sub-castes within FC groups, which was limited to OBC/SC/ST4. The government responded to the demand by providing 10% reservation to economically weaker sections. 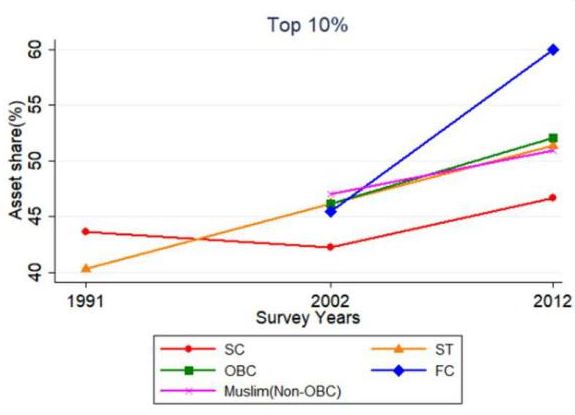 Note: Top 10% within FCs own around 60% of the total FC household wealth.

The level of wealth inequality in India is very high and close to some highly unequal countries in the world. The share of wealth owned by the top decile in India is higher than that in France (55%), Spain (56.5%), and UK (50%) but less than that in Russia (>70%),and the US (77%). China comes close to India with around 65% of the wealth owned by the top decile. Given that India is still a growing economy the threat of increase in economic inequality is higher than that for other stabilised economies. Hence, these wealth and income inequality figures should be taken as a wake-up call.

There is not enough convergence in average wealth across castes groups and hence the debate around economic benefits being captured by the reserved caste groups lacks evidence. There seems to be a development of rich ‘creamy layer’ in every caste group (including SC/ST/OBC) and hence there is a need of informed non-political debate to correct this anomaly. The creamy layer criterion5 for the OBC group is avoiding this problem to some extent. The current reservation policy for poor people is a step in the right direction, but the proposed thresholds6 for reservation fixed by the government are too high.

There is a need for more nuanced research to identify the reasons behind increasing inequality in India. There is no denying that India has to take more redistributive measures to check the increasing income and wealth inequality. Since land is a major asset in total wealth, it is important to target land (inflation in prices, land reforms, and so on) in the short run, while developing other equitable forms of wealth in the long run. It is also important to increase spending on education in India. Unfortunately, in the last few years, the spending on education as a share of GDP or as a share of total expenditure has gone down.7 This needs to be reversed.

What do we know about the wealthy in India? A pre-liberalisation analysis

The coexistence of prosperity and poverty in India

A symposium on Piketty: Introduction