What do we know about the wealthy in India? A pre-liberalisation analysis

Academic attention on the metamorphosis and concentration of wealth has so far excluded poor countries. This column analyses wealth distribution in India, post-independence and pre-liberalisation. It finds that during this period of modest economic growth, the importance of the elite, especially the top 0.01%, declined quite dramatically relative to national income.

The first modern book in economics was called the ‘Wealth of Nations’ because its writer, Adam Smith understood (and transmuted the idea) that the key to prosperity and growth was the generation and distribution of wealth - not just the flow of income. Recent interest in economics has started to return to this question especially in the context of today’s rich countries. The academic attention on the metamorphosis and concentration of wealth has so far excluded poor countries. In fact, the study of the wealth of poor nations should be a core question in development economics (over income growth) because wealth tends to cumulate all past prosperity or disparity.

I found it notable that despite the detailed historical analysis in Thomas Piketty’s book ‘Capital in the 21st Century’, there was no mention of Indian wealth (although Piketty is responsible for a top Indian income series - see Banerjee and Piketty (2005)). To an extent this is understandable because personal wealth data on India is so limited and unreliable that documenting it would require a book in itself. Till date, the Reserve Bank of India (RBI) does not follow the tradition of publishing regular household and private-sector balance sheets at market value, to assess accumulation and asset prices. And yet due to its sheer size and importance, India presents a unique challenge to the notion of prosperity - it is simultaneously home to some of the wealthiest and poorest global citizens. In the past, the question of India’s colonial subservience was related to the drain of wealth, rather than income - the British enriched themselves at the cost of their prized colony. What happened once India became independent?

In recent research, I try to answer this question for a particular historical phase in Indian history (Kumar 2016). The term ‘Hindu rate of growth’ is not really religious - it basically meant a country made up mostly of Hindus that did not grow at the levels seen in other Asian countries undergoing development at the time. Given that people’s assets are disclosed to tax authorities at the time of death for the purpose of inheritance and because India had an estate tax in place until 1985, I was able to develop a series of top wealth-holders and a model called the Estate Multiplier Technique (see Lampman 1962). Due to the exemption limits, it turns out that the series could only start from top 0.1%; this in itself is an indicator of how concentrated wealth was. Unfortunately, comparison with the wealth of the nation as a whole could not be made, because such aggregate series are not available. Sometimes the National Sample Survey Organisation (NSSO) conducts an Assets and Liabilities survey, but it is decennial at best and as with most surveys, underestimates the wealthy. To ‘normalise’ values, I estimate the wealth of these top groups as a ratio of national income - in a sense capturing how many months’ or years’ worth of GDP could be financed exclusively by the Indian elite.

My findings show sharp trends which seem quite reasonable in historical context. The elite declined in importance relative to national income due to a series of (oil-driven) inflation shocks and targeted anti-elite policies (mostly attributable to Indira Gandhi) such as the abolition of the privy purse1 and nationalisation of private assets in banking and coal. In 1966, the wealthiest 200,000 families could have financed around two months of national income but their decline was so dramatic that the top 0.1% could barely finance a few days of GDP (Gross Domestic Product) by 1986. The composition of portfolios suggests that land related properties (urban and agricultural) lost a lot of their inflation-adjusted values. On the other hand, movable assets such as equities, bonds, gold etc. were able to recover their real values by 1986 consistent with the eventual relaxation of a super aggressive tax policy (Acharya 2005). All this points to the rise of a new kind of savvy wealthy class amongst the elite themselves, because disparity within the elite themselves began increasing (after a decline until 1972) and the decline of the top 0.1% was mostly due to the decline of the top 0.01% or the super elite. Thus on net, the gainers were the intermediate elite (just below the top 0.01%).

One way to rationalise these results is statistical equilibrium reasoning, which suggests that wealth concentration increases with liberalisation of capital transaction activities. Aggressive control and regulation of capital activity hence plays the opposite role, causing a reduction of sharp disparities in wealth portfolios - as was the case during my period of study. 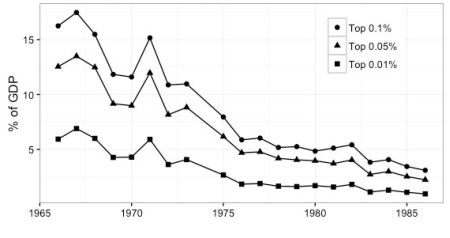 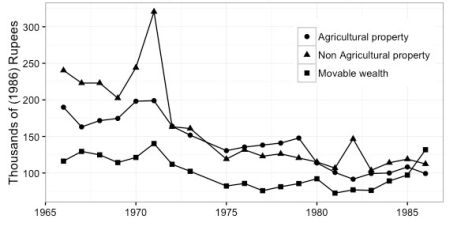 Amongst other things, my study contrasts the relationship between wealth concentration and economic growth in India against Piketty´s hypothesis for the industrialised world. During low-growth phases in today’s industralised countries, past saving made wealthy incumbents more important relative to the majority of the income-earning population. The opposite was seen for India during my period of study - modest growth and a demise of the assets of the rich and elite. Indian growth during this era was quite low and driven by national capital accumulation for the development objective (Nehruvian Socialism, as it is called), with simultaneous tax scrutiny of the elite. If national capital crowds out personal wealth, then it makes sense that wealthy classes lose their importance2. At the same time, tax policies aimed at equalising wealth distributions also play a huge role in breaking the endless cycle of inheritance and accumulation which otherwise perpetuates inequality. As more data becomes available, longer time series of top wealth-holders will tell us if these trends have been (as expected) reversed and whether the Indian elite are back again.