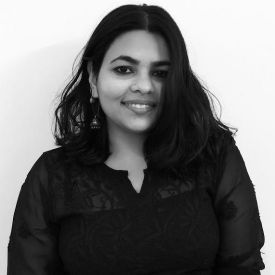 The expansion of markets from physical spaces to e-commerce platforms during the pandemic widened the pre-existing digital gender divide in India. Employing the method of auto-photography, the team at SEWA Bharat asked women microentrepreneurs to capture their understanding of the term ‘digital’. They found that technology which may be commonplace in metropolitan areas, is significant and aspirational for the rural poor. Their findings bring forth a nuanced understanding of what digital empowerment looks like for women across the country.

The pandemic both illuminated, but also widened the existing digital gender divide in urban and rural India. The digital divide has made women and those engaging in the informal economy, vulnerable to greater risks.  These range from digital entry barriers; reduced scope of earning owing to loss of livelihood; rapidly shifting modes of market exchange and transactions; and the digital ecosystem as a whole, with its inherent biases, including privacy risks and accessibility issues.

Against this backdrop, SEWA Anubandh’s1 journey moved from facilitating access to a digital marketplace, to gradually attempting to build enabling environments for microentrepreneurs to operate digital mediums on their own. In March 2022, it carried out an exploratory, visual research study in which participants performing different roles under Anubandh were asked to submit visual and audio pieces in response to a question about ‘digital ka matlab aur istemaal’ (the meaning and usage of the term ‘digital’) in their everyday lives. Amidst the ongoing effort of trying to integrate women in the expanding digital ecosystem, it felt relevant for the SEWA movement to bring forth the question of what really constituted the term ‘digital’ for poor women. What characterises digital technology for them? What is the nature of their interaction with such entities? How far are their lives enmeshed with such systems? What would the steady integration of digital systems with income-generating sources actually mean for women informal workers from the lowest socio-economic rungs of society? These are some of the broader questions which helped us design the first entry point to Anubandh’s pilot inquiry.

Normally, during interviews or surveys, participants are required to respond to questions in a given timeframe, context and format, which entails a minimum command over the prescribed language of exchange in the least. In an attempt to move away from traditional methods of data collection for research, our effort was centered around trying to understand how the stakeholders and participants perceived a given subject of interest, self-demonstrated through non-verbal expression.

Auto-photography, one of the research methods within visual ethnography, has been employed in this study. This ethnographic approach was initially used in the 19th century, when researchers would take pictures in the field and present them to other audiences to depict native cultures from around the world (Glaw et al. 2017). Fast forward to the present times, the research method now entails the participant themselves clicking pictures to convey certain meanings, without direct involvement of the researcher in the process (Noland 2006). Therefore, by adopting this approach, we hoped that SEWA’s women would similarly be able to express themselves differently (and perhaps more easily, for some), without the bounds of a certain language and with fewer response biases.

Broadly, the inquiry on what digital means generated various associations. The participant groups expressed themselves through audio-visual media by engaging a wide range of objects, tools and technologies which play certain fixed roles in their lives. We notice that the level of utility derived from different objects varies from individual to individual and is strongly dependent on the interaction between their cultural and socio-economic settings and the different kinds of work that they do as a part of SEWA Anubandh in particular, and the SEWA ecosystem at large.

Entries by Kajal Ben and Naina Ben, who are grassroots digital data collectors with SEWA Sarvekshan in Delhi, which show computer use for work (left), and smartphone use for making E-shram cards and listening to music while traveling (centre and right).

A total of 102 entries – 91 photos and 11 videos – have been submitted by 18 women for this study. We start exploring this collection by first looking at the responses from the participants of SEWA Sarvekshan2. Here, smartphones and laptops find maximum representation. Responses from Delhi, which is the national capital territory, shows a higher prevalence of access to digital assets and networks than  rural respondents, with significant differences in ideas regarding the utility of those assets. The participants from Delhi mostly depicted laptops as a device which is used for work, specifically in the context of an office space, while the smartphone is seen to be utilised for fulfillment of personal domestic requirements, communication, entertainment, leisure, or other allied activities. The fact that they have also previously been trained in the use of various digital tools for collection of data, and many respondents work as digital data collectors for different research projects, can offer some insight into their approach of categorisation of specific devices as digital entities.

Entries by Supriya Ben and Diya Ben, who are grassroots digital data collectors with SEWA Sarvekshan in West Bengal.

However, moving away from the metropolitan landscape of Delhi, towards the quaint, small town of Phulia, West Bengal, we see a change in the pattern of responses– social media and e-commerce platforms notably, gain prominence. Phulia is famously known world over for its handloom textile industry and its skilled weaving communities. We found that the advent of the pandemic largely catalysed the movement and expansion of markets from local spaces to online e-commerce platforms, which would have naturally impacted the trade dynamics and incomes of the small weaving businesses of Phulia. The Sarvekshan women who live in this town may be witness to such prominent changes in their way of doing business and their entries could reflect a collective awareness of these developments, therefore serving as ‘symbols’ of digitisation.

Entries by Supriya Ben and Diya Ben, who are grassroots digital data collectors with SEWA Sarvekshan in West Bengal

Another section of the participant pool, the Udyami Sakhis3, emphasised appliances found within their private spaces as being digital. There was a high frequency of visual entries of items like the refrigerator, washing machine, press iron, electric kettle, geyser, and gas stove from each of the participant in the locations of Uttarakhand, Rajasthan and West Bengal.

Entries by Anjali Ben and Nisha Ben, who are Udyami Sakhis with SEWA Anubandh in Rajasthan and Uttarakhand consisting of a washing machine (left), electric kettle (centre) and iron box (right))

The common thread which ties together all of these appliances are the important role that they play in the fulfillment of unpaid care work performed by women, and can also indicate the extent of time and labour women spend towards fulfilling their household responsibilities. The representation of these appliances in the data can either suggest their current presence in the daily routine of the Udyami Sakhi, or her aspiration to own these items. 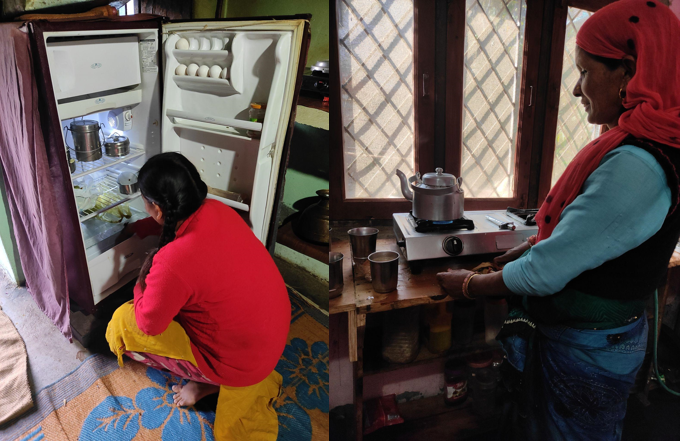 Entries by Nisha Ben, who is an Udyami Sakhi with SEWA Anubandh in Uttarakhand and manages Atithi Homestays, consisting of a fridge (left) and tea kettle on gas stove (right)

The last group, namely the Atithi Homestay participants, are women microentrepreneurs based in rural Uttarakhand and belong to a relatively older age bracket as compared to the earlier cohorts. Their primary occupation consists mostly of agricultural work, along with renting out their homes as homestays for diversifying their income. A few women reiterated the theme of household appliances linked to care work, and then moved on to mention the technology which further enables the reduction of care work burden (that is, the home delivery of household utilities, vegetables and food by different online applications). As a result of major mobility challenges due to the lack of public transport in the remote, hilly terrains of rural Uttarakhand, being exposed to the innovation of having a designated individual deliver utilities on one’s doorstep in exchange for a fee is of extreme value. It saves the women from the trouble of traveling long distances uphill and downhill on foot to get food and water. In the same line of thought, the growth in communication, connectivity and infrastructure, expansion of water supply through taps, and availability of new medicines were all recognised as digital and technological in nature by this group.

Entries by Nisha Ben, who is an Udyami Sakhi with SEWA Anubandh in Uttarakhand, and manages Atithi Homestays.

All of these markers of progress, which are assumed to be rudimentary and are already ubiquitous in metropolitan urban areas, are actually facilities which the rural poor in the country have aspired to for decades. All of these conversations signify the history of a rural community’s collective experience of living life with very limited resources, and how strongly the geographical attributes of a community can influence their perception of innovation and progress, which may be even more pronounced for the women within the community.

More often than not, the term ‘digital’, and its varied designs and functions have traditionally been influenced by narratives external to the informal economy. This study has attempted to see this phenomenon play out specifically for its participants through their own eyes in a simple manner.  These learnings can be used to inform development interventions, the success of which is determined by awareness, access, and ownership.

The data that has emerged from this study reflects the extent of current integration of digital technologies and innovations in the life and work of a poor informal woman worker, and how its significance and impact takes a different shape with changing geographies and cultures across urban and rural landscapes. It raises important questions about whether access to and usage of digital technology forms an important segment of the social and economic empowerment for self-employed women in the informal economy; and what an appropriate illustration of ‘digital empowerment’ would look like for women across the rural and urban poor. These lines of enquiry elicit many more such pertinent questions, which can investigate the newly emerging needs of the female workforce in the country.

On a smaller scale, by starting the journey of building evidence on how SEWA’s stakeholders approach and characterise the realm of the digital in their workspaces and everyday life, we envision that national conversations surrounding upskilling of the same women – and digital inclusion and policy measures which aim to benefit them in an increasingly digital world – would be better tailored to grassroot realities.