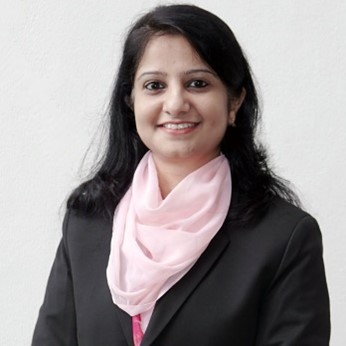 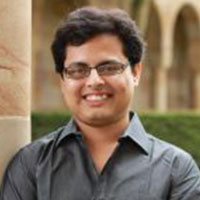 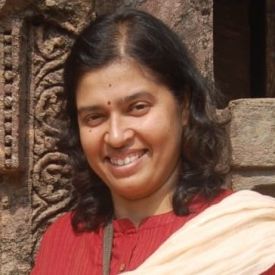 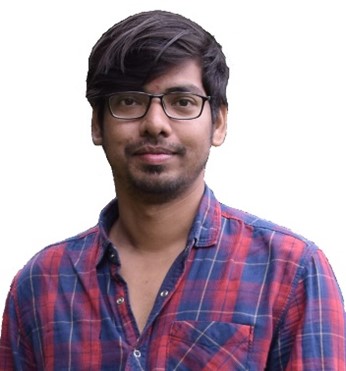 The 2019 National Crime Records Bureau report shows a 7.3% increase, compared to 2018, in violence against women, with one in three women being subject to physical, emotional, or sexual violence. In this context, Lalji et al. discuss their field study in Bihar involving an intervention to increase awareness among adolescent girls regarding laws pertaining to their safety, and to enhance their confidence to study and work, via self-defence workshops.

India is plagued with rising concerns about violence against women (VAW), with high incidence of sexual harassment (National Crime Records Bureau (NCRB), 2020, National Family Health Survey - 5, 2020). Women constitute nearly 48% of India’s population, and data show that one in three women is a victim of physical, emotional, or sexual violence. The 2020 NCRB report shows a 7.3% increase in VAW in 2019, as compared to 2018. ‘Cruelty by husband or his relatives’, ‘assault on women with intent to outrage her modesty’, ‘kidnapping and abduction of women’, and ‘rape’ were the major stated reasons for cases registered as VAW. Shockingly, India recorded an average of 88 rape cases daily in 2019, with nearly one rape every 16 minutes (NCRB, 2020). Along with the rising incidence of VAW, the female labour force participation rate across India has declined from 30.3% in 1990 to 20.8% in 2019.

In the state of Bihar in particular, the total number of rape cases reported every year have almost doubled in the past two decades, from 746 in 2001 to 1,438 in 2020. Bihar also ranks second in the kidnapping and abduction of women, with about 9,025 reported cases in 2019 alone, second only to Uttar Pradesh. Of these 9,025 cases, 7,114 involved intent of forced marriage – again, the second highest in the country (NCRB, 2020). Out of these 7,114 cases of kidnapping, a large number of them (4,482) were of girls below 18 years of age. However, the actual numbers are expected to be even higher, given the rampant under-reporting of gender-based violence in Bihar.

Gender-based violence: Impact on work and education, and legislation

Gender-based violence can have repercussions not only on the victim’s mental and physical health, and health behaviours such as smoking, and alcohol abuse (Campbell 2002, Heise et al. 2002, Krug et al. 2002, Watts and Zimmerman 2002), but also on female labour force participation (Chakraborty et al. 2018). Women and their families are also often reluctant to let them take up paid work outside of the home due to the actual and perceived threat of gender-based violence (Siddique 2019). Excessive dependence on family – for both physical and economic security – and lack of knowledge about various laws in place to protect the safety and security of women, are often cited as major reasons for the reduction in the female labour force participation rate. Lack of awareness as to what constitutes VAW and the laws in place to safeguard women against such crimes could be one of the reasons for the high incidence of VAW and the under-reporting of such crimes. Crimes like sexual harassment at the workplace therefore limit women’s aspirations, which in turn adversely affect their economic empowerment. These negative effects of a perceived threat are often higher for adolescent girls, and as a result households decide to get them married early as a
precaution (Parkashi et al. 2021). Sudarshan and Bhattacharya (2009) also find that safety concerns are one of the key deterrents to working outside the home. In fact, Garcia-Reid (2007) finds negative effects of a violence-prone neighbourhood environment on school engagement among girls.

There are several laws in India to protect women’s rights such as the Sexual Harassment of Women at Workplace (Prevention, Prohibition and Redressal) Act, 2013, Protection of Women from Domestic Violence Act, 2005, Dowry Prohibition Act, 1961, Articles 14, 15, 16, 19(1)(g), and 21 of the Indian Constitution; and Sections 294, 354, and 509 of the Indian Penal Code that deal with eve-teasing, stalking, molestation, groping, and other forms of sexual harassment. There also exist earmarked government departments to deal with such cases. However, VAW continues to rise and several cases still go unreported.

Hence, it is important that women be aware of these laws. Additionally, teaching women basic self-defence techniques, could also help deter VAW to an extent.

In recent IGC research (Lalji et al. 2020), we explore whether a well-designed awareness1 and self-defence training programme can be an effective tool to help adolescent girls feel safer, and boost their confidence to fight back in in case of an attack. In turn, this is expected to motivate them to have aspirations and make more optimal decisions regarding their education, career, marriage and childbearing. We study a sample of 690 adolescent girls enrolled in grades 7-12 of 45 schools, located across 20 villages in Patna district, in the state of Bihar, between September and December 20202. We also examine whether the trainees share the information – despite not being specifically encouraged to do so – that they receive in these workshops with their siblings and friends. For this purpose, we ask approximately 200 siblings3 and 504 close friends4 of the participants, to complete a short test assessing their knowledge about women’s safety and rights.

Students who are part of the study, are randomly assigned into two ‘treatment’ groups (who receive an intervention) and a ‘control’ group (who do not receive any intervention). There were 488 girls in the treatment group and 202 girls in the control group. In the first treatment group with 243 girls (referred to as ‘awareness only’ (A)), students attend only an awareness drive with trained women counsellors. Each student receives detailed information about the safety issues that women face, the relevant laws, and steps that women could take to protect themselves in their day-to-day lives. Several videos are shown to the students, including on distinguishing between ‘good touch’ and ‘bad touch’ (related to sexual harassment of children), making pepper spray through ingredients easily available at home, and inspirational accounts of girls fighting back (both physically fighting back, and fighting back against societal pressure). The students are also encouraged and motivated to pursue their goals, to be independent, and to hope and aspire for a better life and career.

In the second treatment (referred to as ‘awareness and training’ (A&T)) with 245 girls, along with the awareness drive, students also participate in an online self-defence training workshop. In the workshop, students are taught basic physical exercises to help build stamina and strength, and specific self-defence techniques to help protect themselves in different situations of gender-based violence.

Estimating the direct and indirect effects of the training programme

We observe that after the intervention (as captured during the endline survey) the knowledge index increased substantially (by about 7 points on a scale of 0-11) for both treatment groups – A and A&T – relative to the control group (Figure 1). The level of confidence to fight back, of students in the two treatment groups, also more than doubled compared to the control group. The students in the 'A&T' group were, however, relatively more confident to fight back in different situations of physical abuse compared to those in the ‘A’ group. 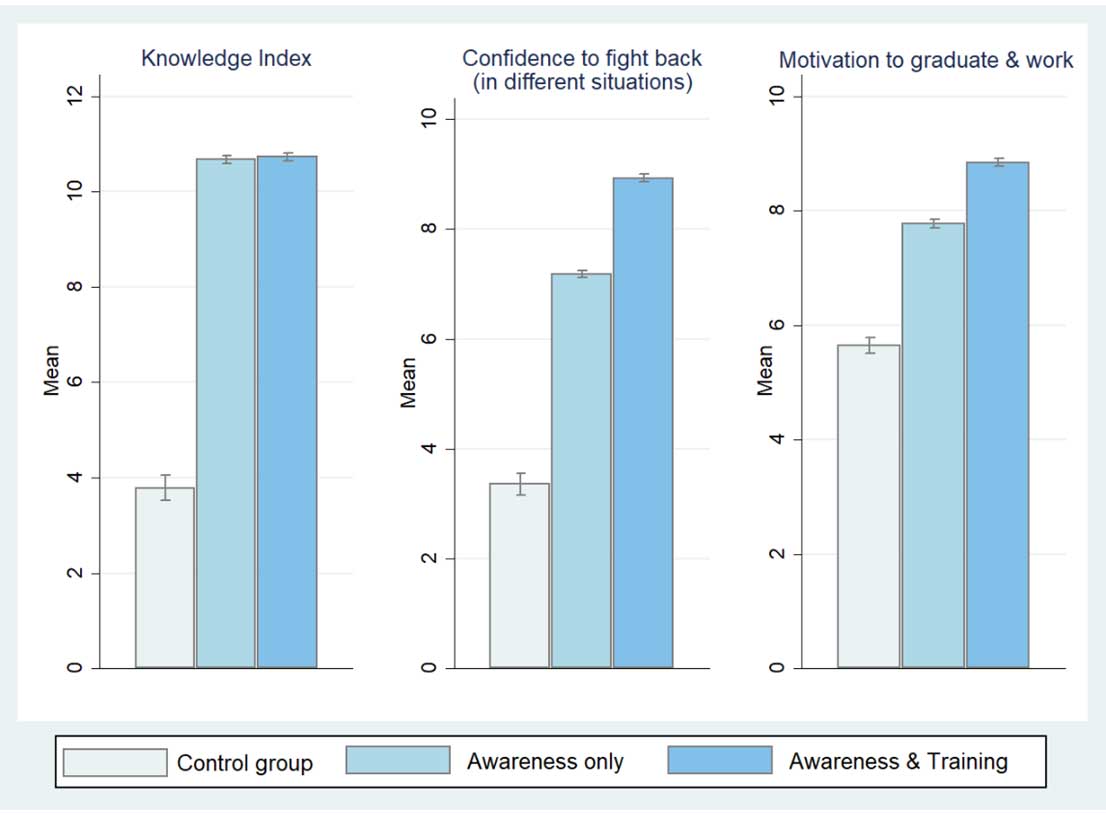 We find direct effects due to the intervention on students’ future aspirations. Students who receive either of the treatments have higher levels (approximately 2-3 points, on a scale of 0-10) of motivation to graduate and work (Figure 1). This impact is higher for the ‘A&T’ group relative to the ‘A’ group. The targeted intervention therefore makes the participants’ aware about their rights, the laws in place to protect them, and improves their confidence to fight back, which may act as channels to motivate them to graduate and work in the future.

With respect to the spread of information to the participants’ siblings and close friends, we find that (Figure 2) awareness and knowledge about women’s safety laws and rights is higher (by approximately 5 points on a scale of 0-11) for both siblings and close friends of those in the treatment groups (relative to the control group), indicating that adolescent girls do indeed share the information they receive in the training programme to others in their home and social networks. We find that this information is shared, to the same degree, irrespective of age and gender of the siblings, and caste of their close friends. It is noteworthy that adolescent girls share this information equally with their brothers as well. 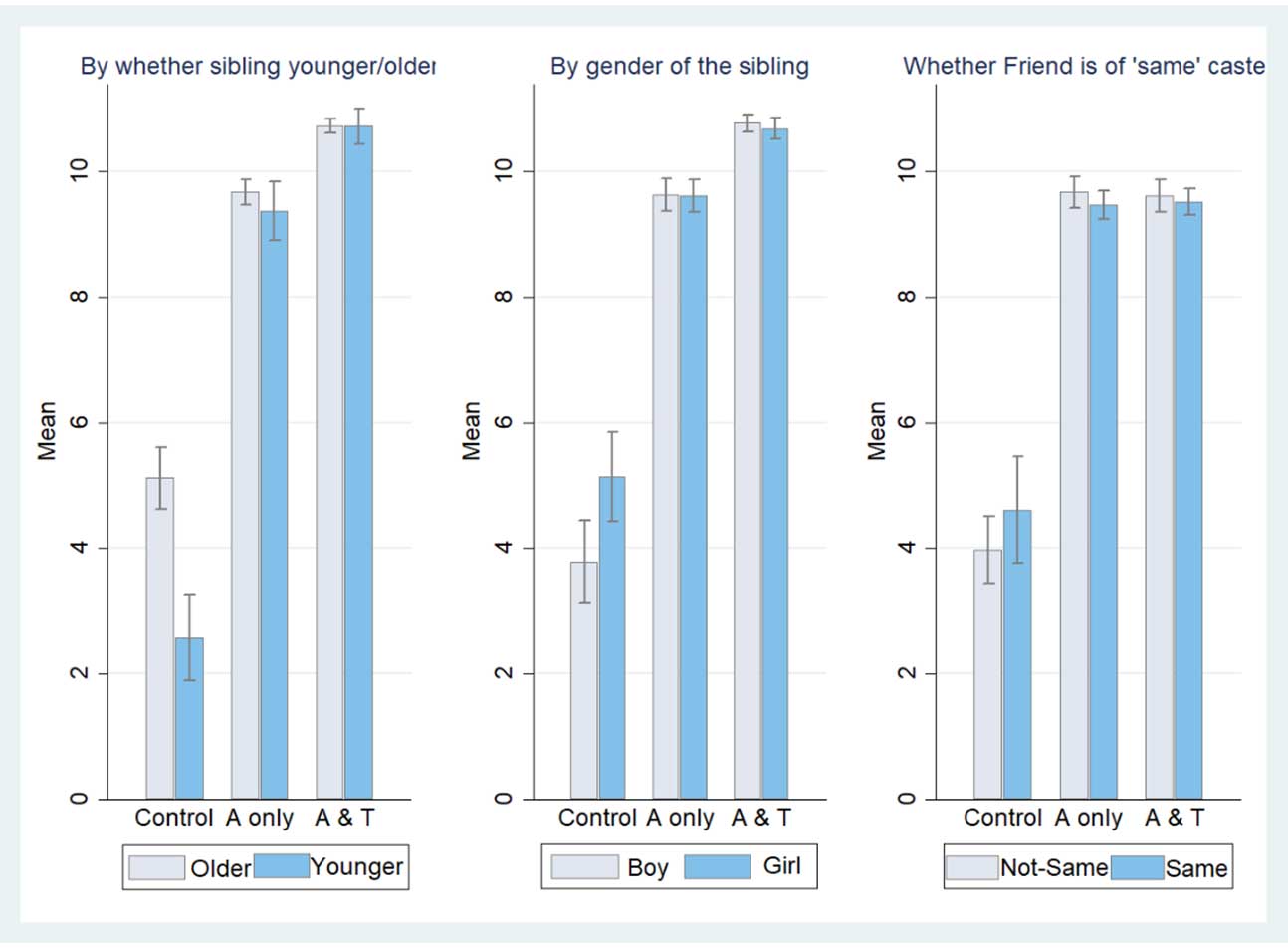 There exist several laws in India to protect women and young adolescent girls from physical, emotional, and sexual harassment. However, lack of awareness about these laws is still widespread and we believe that it is important to increase awareness to make these laws more effective. We find that awareness drives as well as self-defence training classes, not only substantially increase the level of knowledge among women regarding their safety and rights, but also boost the self-confidence of these adolescent girls to fight back, and motivate them to graduate and go out to work. Our results also suggest that such sessions could have significant positive externalities on others in the society – even without direct exposure to these training and awareness drives.

Having compulsory awareness drives in schools (where knowledge about the various laws and provisions can be formally disseminated) and incorporating self-defence training sessions in the school curriculum for adolescent girls can help empower girls in the future.