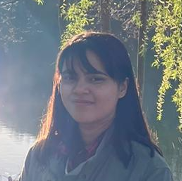 Launched in 2016, Pradhan Mantri Ujjwala Yojana (PMUY) aims to encourage the adoption of liquefied petroleum gas (LPG) for cooking. Using National Sample Survey data for 2014 and 2017, this article examines the impact of PMUY in two states with low LPG usage – Chhattisgarh and Jharkhand. It finds intra-state disparities in LPG usage and PMUY enrolment: regions with relatively low usage rates pre-PMUY had low enrolment, with higher enrolment in urban than in rural areas.

The Pradhan Mantri Ujjwala Yojna (PMUY) was launched by the Government of India in 2016 to boost the adoption of Liquefied Petroleum Gas (LPG)-based cooking fuel in the country. With a vision of benefitting 80 million women living below the poverty line (BPL), the programme aimed to provide capital subsidies for LPG connections and cooking stoves. The scheme has been hailed as a success as it quickly achieved its target of providing 80 million connections seven months ahead of the March 2020 deadline.

Further allocations were made towards PMUY in the 2021-22 Union Budget – with plans of granting an additional 10 million connections, particularly in states with low LPG usage, including Chhattisgarh and Jharkhand. The usage of LPG-based fuel in these states has historically been low, and this announcement is the right step towards tackling the challenge of energy poverty in the country. The programme also can reduce the regional disparities in LPG usage by promoting use in rural areas. This article employs data from the 71st, 75th, and 76th rounds of the National Sample Survey (NSS), to examine the intra-state disparities in LPG usage in Chhattisgarh and Jharkhand and the performance of PMUY in addressing these disparities.

Cooking with solid fuels is the main contributor to household air pollution, which has been responsible for three to four million early deaths per year across the world (Rosenthal et al. 2018). It is a cause of several health issues such as tuberculosis, cardiovascular diseases, and adverse pregnancy outcomes. There is also evidence of an association between solid fuel use and acute respiratory illness in children under the age of five (Dherani et al. 2008). Further, women in the household are disproportionately affected as they are the ones mainly engaged in cooking, and are responsible for going out and collecting solid fuel. As per the 2001 Census, only 17.5% of Indian homes were using LPG as their primary cooking fuel, and 90% of rural households were dependent on biomass (D'Sa and Murthy 2004). Thus, given the situation, PMUY – with a specific aim of reaching BPL households – has been garnering appreciation from all fronts. The benefits of the programme are numerous. It reduces household air pollution and deforestation. It also frees time and effort spent by the women in gathering fuel for the household and promotes gender equality.

However, recent studies, notably the report by the Comptroller and Auditor General (CAG) of India (2019), have been indicating that though connection numbers are rising as a result of the scheme, the annual average LPG refill consumption is still low. This implies that the programme's benefits may not be realised in the long run. A possible reason for discontinued usage is the unaffordability of refill and delivery costs. Solid fuels are also freely available, which makes them easy to use. Thus, adoption also needs to be promoted along with granting connections. Acceleration of LPG usage requires targeted subsidies for those who cannot afford costs. However, existing norms would also need to be altered by creating awareness and educating the public about the adverse effects of solid fuels. The women of the households who are most exposed to these harmful effects should be at the centre of the awareness campaigns.

Notwithstanding the limitations of PMUY, its contribution to the promotion of LPG-based cooking fuel cannot be undermined. A comparison of the estimates obtained from NSS data on social consumption in 71st (2014) and 75th (2017-2018) rounds, shows that the usage of LPG1 fuel as primary cooking fuel in rural households rose from 18.4% to 42.5%. In Jharkhand, for rural and urban areas combined, the household LPG usage increased from a 12.8% to 27.1% during the same period. Chhattisgarh, on the other hand, experienced an increase from 14.7% to 36.8%. The scheme has also been successful in reducing regional inequalities in LPG usage rates within these states as shown in Table 1.

However, further investigation of district-level performances in Chhattisgarh and Jharkhand reveals that PMUY enrolment has been higher in districts that also had relatively higher usage rates before the launch of the scheme. This particular finding indicates that households in areas with high usage and awareness about the potential benefits, are more likely to register for the programme. The data also indicate that areas that had lower usage rates before have not undergone much improvement in 2017, further corroborating the argument.

Figure 1 exhibits the LPG usage rate distribution for the state of Chhattisgarh in 2014 and 2017. Figure 1c illustrates the distribution of households identified as PMUY beneficiaries in the state as per the NSS 76th round (2018)3. Juxtaposing figures 1a and 1c indicates the urban-rural divide. Districts such as Korba and Raipur, which had a higher percentage of households using LPG as a primary cooking fuel in 2014, also have a higher proportion of families enrolling in the scheme in 2017 and 2018. These districts are also more urban, indicating that households in urban regions may be more inclined to participate in the programme. Access to biomass is limited in urban areas, and households in urban areas are expected to be aware of the scheme from advertising campaigns such as hoardings and print media and thus ‘self-select’ into the programme. There are also social network effects in operation (Srinivasan and Stefano 2020) – households learn from friends and relatives about the advantages of LPG and PMUY and are encouraged to enrol in the programme. Besides, continuing the usage of LPG cylinders is also easier in urban areas as there are fewer delivery hassles and more service points. Unsurprisingly, districts such as Kabirdham and Narayanpur – predominantly rural – with low usage in 2014, also experienced fewer households participating in PMUY and not much improvement in 2017. Some rural districts, though, stand out. An example is Bijapur, with higher PMUY enrolment rates, as well as an increase in usage in 2017. 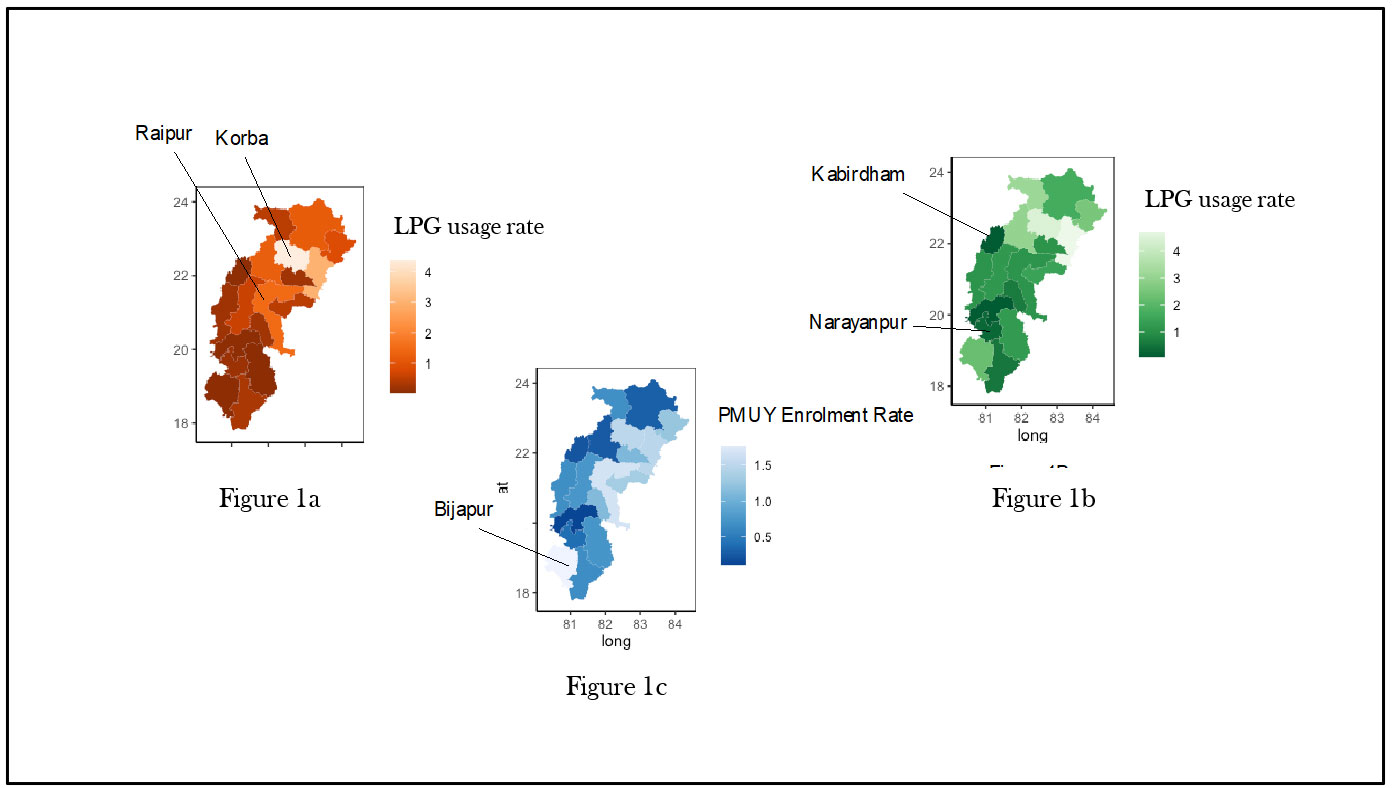 Figure 2 shows LPG usage and PMUY enrolment rate in the state of Jharkhand. Akin to Chhattisgarh, primarily rural districts such as Dumka, Giridih, and Simdega, with low usage rates, also had low PMUY enrolment. Interestingly, Ranchi – comparatively more urban than others, with a low usage rate in 2014 – had fewer households enrolling in the scheme and negligible improvement in 2017. This implies that the differences in usage and enrolment may not be just a rural-urban phenomenon, and the self-selection and social network effects underlined above are stronger in some regions than others. 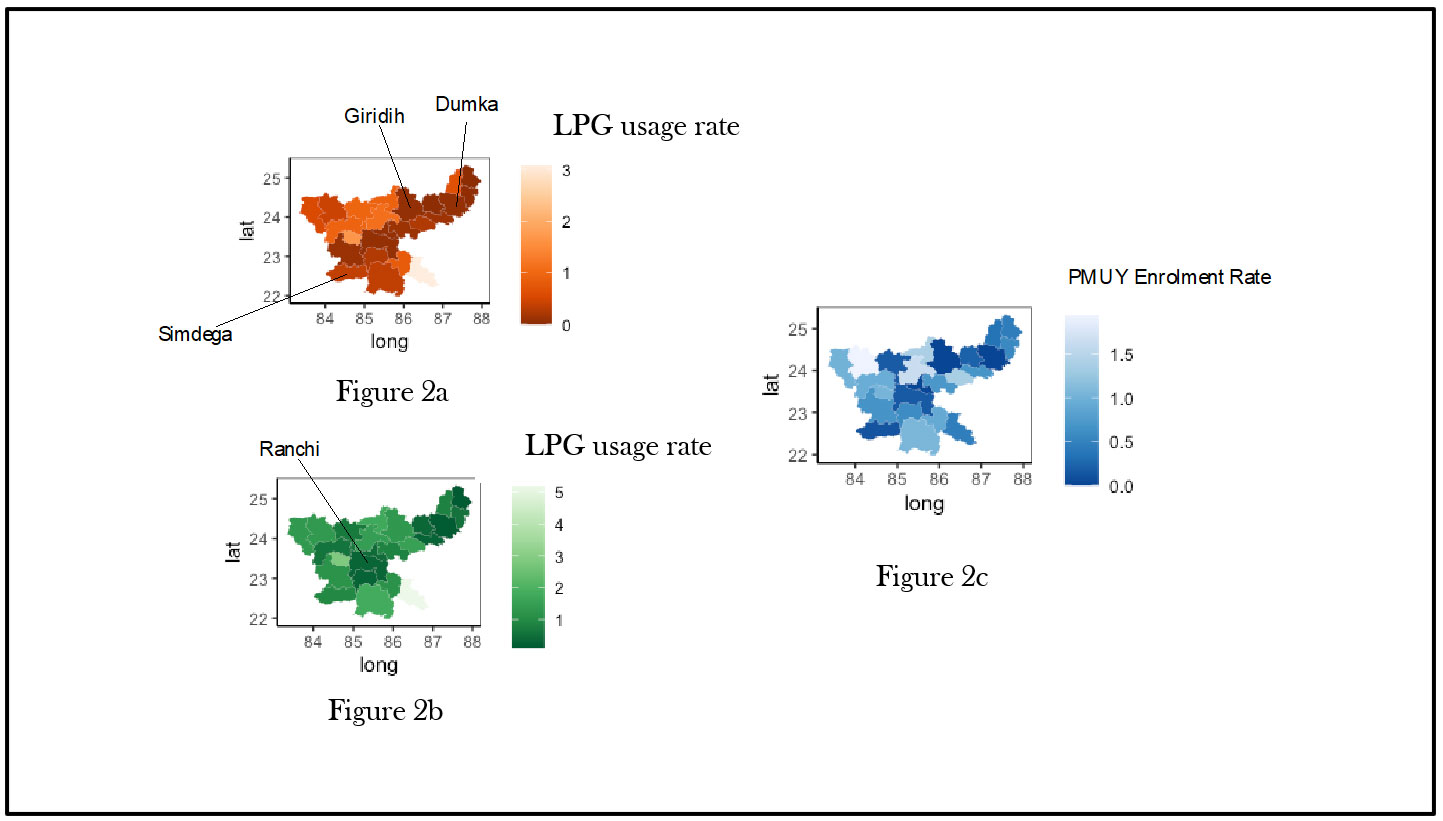 In both states, Chhattisgarh and Jharkhand, there are intra-state disparities in terms of LPG usage and PMUY enrolment. Regions with lower usage rates, on average, are also experiencing low PMUY enrolment. Enrolment is higher in urban than in rural areas.

Promotion of the scheme in rural regions requires network effects to kick in. That is, as more households learn about the programme and the benefits of LPG cooking fuel, there would be more information dissemination and more households would be motivated to participate in the programme. This can be achieved by encouraging community participation by involving the gram panchayats4, ASHAs5, and local NGOs to create awareness among the public.

Furthermore, these suggestions, in no way, undermine the other reasons behind low enrolment rates in rural areas, which are already a part of ongoing discussions on the scheme. The refill costs are high, and involving the local governments would also help in identifying the families that are not being able to afford these costs so that targetted subsidies can be provided. Sustained use of LPG fuel also requires overcoming the supply barriers such as late deliveries and high delivery costs (Dabadage et al. 2018). The findings and recommendations outlined here would instead complement the existing efforts to facilitate LPG-based cooking fuel usage in these regions. Proper roadmaps, in consultation with state and local authorities, should be charted out. This would ensure that the districts that have been, so far, neglected and have poor usage are focussed on, and the regional inequalities are addressed. Finally, more studies are required so that the district-specific characteristics facilitating or obstructing LPG usage and PMUY participation can be identified and carefully analysed, as the learnings would help in refining the PMUY to boost LPG usage.

Hi, I loved the article, and how it explores the effectiveness of PMUY in two states by using statistical measures and linking them to academic theories. As per my understanding, the Gini coefficient is commonly used to measure income inequality, with cumulative income (%) being the y-variable and cumulative population (%) being the x-variable. Can the author please explain what they used as a x and y variable to measure the inequality in adoption across states, and how they arrived at the values? Appreciate the response.