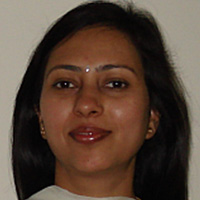 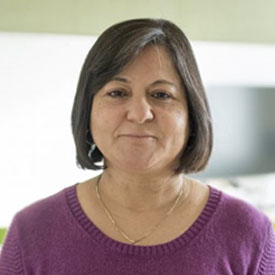 University of Illinois at Urbana-Champaign

By enacting the Companies Act in 2013, India became the first country in the world to mandate spending by large corporations on socially responsible initiatives. Using firm data from 2010 and 2016, this article shows that the Act increased expenditure levels on corporate social responsibility as well as their reporting. However, the hybrid mandatory-voluntary nature of the Act has led to some under compliance.

Resource-constrained governments in developing economies are realising the importance of engaging private businesses – with their large technological, financial, and managerial resources – to contribute to the social development agenda of the country. By enacting the Companies Act in 2013, India became the first country in the world to mandate spending by large corporations on socially responsible initiatives. Every company having net worth of at least Rs. 5 billion, sales of Rs.10 billion, or profit before tax of Rs. 50 million, during any of the three previous financial years, is required to constitute a CSR (corporate social responsibility) Committee within its Board, develop a CSR policy, and plan for CSR expenditures. The Act requires such firms to identify suitable community projects and implement them in partnership with NGOs (non-governmental organisations). CSR activities are defined as those that serve social objectives such as reducing hunger, poverty, and disease; promoting education, vocational skilling, and women’s economic empowerment; social business projects, disaster relief, and environmental sustainability. These activities go beyond a firm’s efforts to make its own operations more environmentally or socially responsible. Firms are expected to report CSR expenditures in their annual financial reports. The Act also specifies that firms use their resources to actively implement socially beneficial projects rather than simply transfer funds in the form of financial donations to charitable causes; charitable financial donations are, therefore, not considered as a part of the CSR expenditures (Bansal et al. 2018).

A departure from the usual regulations is that the Companies Act does not impose penalties on firms that fail to spend the mandatory 2% of their average net profits on CSR. Instead, these firms are required to disclose the reasons for non-compliance on their website and in their annual financial reports. Thus, the Act has an element of voluntary regulation. It aims to establish a social norm for CSR and lay expectations for CSR activities by large firms, thereby providing a legitimate channel for stakeholder and peer pressure on firms to engage in CSR activities. Examining how firms in India responded to the law would provide insight into the effectiveness of this hybrid model of mandatory and voluntary regulation.

In developed countries, firms have voluntarily integrated CSR into their business strategies (Esty and Winston 2009, Benabou and Tirole 2010). Factors that drive firms to engage in such initiatives include: potential to reduce regulatory scrutiny and boycott threats by activists; appealing to consumers, investors, or employees who care for such engagements. Board members or executives may be concerned about social responsibility and be willing to forego some of their resources towards altruistic motives.

However, the benefits of a proactive socially responsible business strategy are less clear in developing countries where environmental regulations may be lacking or poorly enforced, social pressures to comply are weak, and rewards for being responsible are uncertain (Blackman 2009). Thus, voluntary efforts at CSR have been relatively low in developing countries (Earnhart et al. 2014).

The objective of our study is to examine the effectiveness of the Act, in the first two years of its implementation (2015 and 2016), in inducing firms to report their CSR activities and increase their CSR expenditure to targetted levels (Bansal et al. 2021). The Companies Act provides a natural experiment to examine the effects of the Act on CSR expenditures of firms that come under the purview of the Act (henceforth termed as ‘eligible’) after 2014, relative to their CSR expenditures before 2014 as well as relative to the firms that do not come under the purview of the Act (henceforth termed as ‘non-eligible’). We estimate the effect of the Act by undertaking an analysis of panel data1 for over 39,000 firms across India and all industries for the period 2010-2016, using a difference-in-difference2 approach. Of these firms, on average, 12% were eligible and the rest were non-eligible. The data for this analysis are obtained from the Prowess IQ database compiled by the Centre for Monitoring Indian Economy (CMIE).3 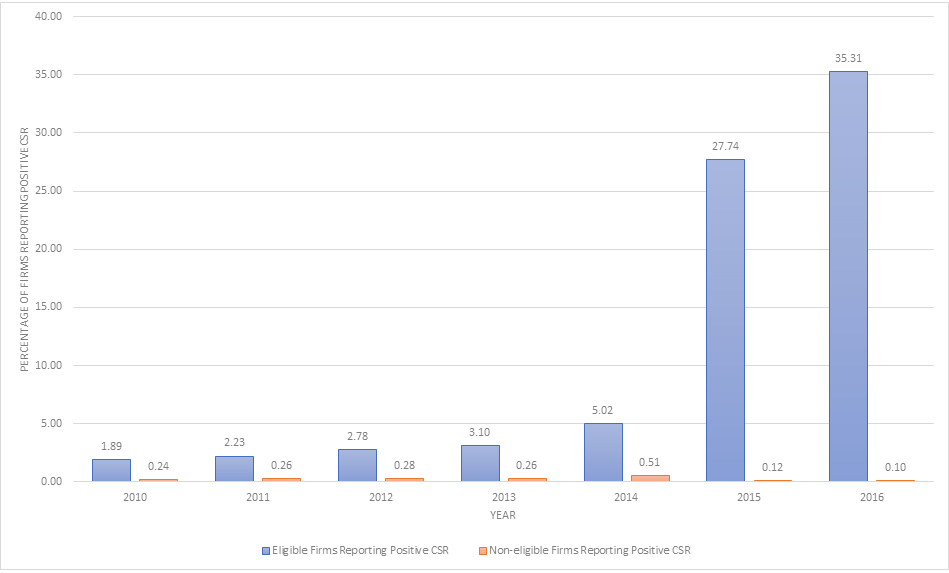 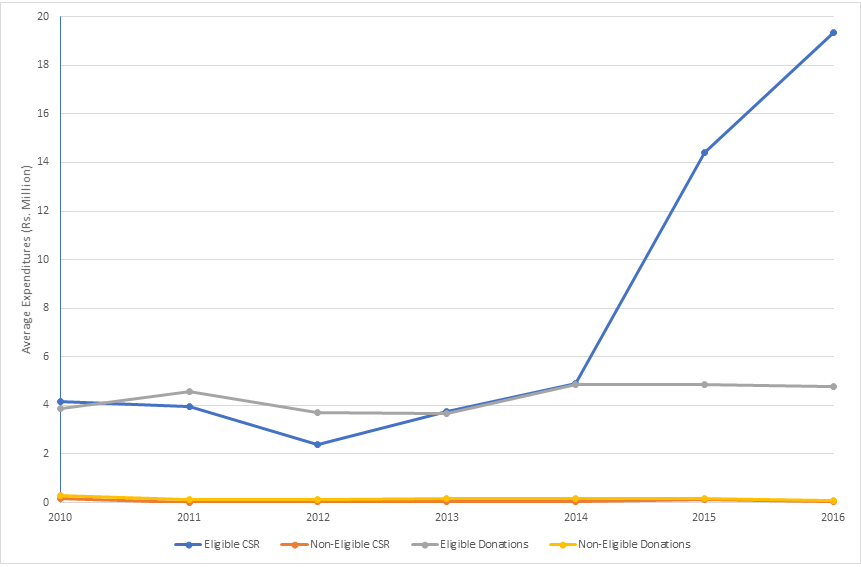 Since CSR requirements are based on a threshold of size, we expect the Companies Act to have a ‘discontinuous’ impact on CSR expenditures by firms depending on whether they are above or below the threshold. We examine whether this is the case using a ‘regression discontinuity design’ method4 to quantify the effect of the Act on CSR expenditures by firms at the threshold of eligibility.

Studies suggest that when organisations face new norms with uncertain benefits, they imitate industry peers and implement similar practices (see Durand 2015). Firms may imitate peers due to reputational concerns, herd behaviour, learning, and competitive threat if firms’ stakeholders value the implementation of those norms (Yang et al. 2017). We examine the presence of peer effects on CSR expenditures of firms and its magnitude, relative to the direct effect of the Act itself.

To estimate peer effects, first and foremost, peers need to be identified. We consider three alternative definitions of peers. The first includes firms with the same industry classification as peers. This groups firms based on products, and ensures that a firm’s peers are subject to similar demand shocks and public perceptions. However, this approach may result in large groups of firms with wide variation in terms of size and capacity for CSR. We, therefore, consider a second way to define peers – based on a firm’s net worth. Firms with a similar net worth are typically used for benchmarking a firm’s performance by investors. Thus, CSR by peers in the same net worth group may influence a firm’s CSR, if it is largely being undertaken for strategic financial reasons. Third, we consider a combined measure that defines peers as firms with similar net worth and belonging to the same industry. Firms are likely to view such firms as their more immediate peers, subject to the same competitive and stakeholder pressures.

We find that the Companies Act significantly increased the likelihood of reporting CSR activities by eligible firms; these effects were stronger in 2016 than in 2015. The Act increased the likelihood of firms reporting their CSR expenditures by 19% and 28% in 2015 and 2016, respectively. The Act also significantly increased the level of expenditures on CSR by eligible firms – these firms were spending about 1% of their profits, on average, on CSR initiatives in 2015 and 2016, as demonstrated in Figure 3 and Figure 4 below. Although this was lower than the 2% requirement, the Act did raise additional expenditures on CSR by about Rs. 69 and 86 billion over the two years, amounting to 1.16% of profits in 2015 and 1.35% of profits in 2016. However, there remains a substantial level of under-compliance of about Rs. 50 and 41 billion, respectively, in the two years. We also find that the Act did lead to a jump in CSR expenditures by firms at the threshold of compliance. Overall, around 12.5% of the eligible firms complied with the Act in 2015 and around 21% in 2016.

Figure 3. Predicted CSR for eligible firms as a function of profit for 2015 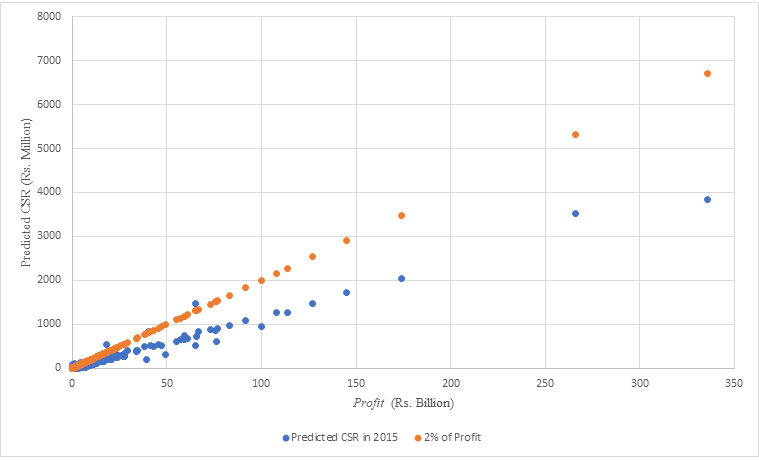 Figure 4. Predicted CSR for eligible firms as a function of profit for 2016 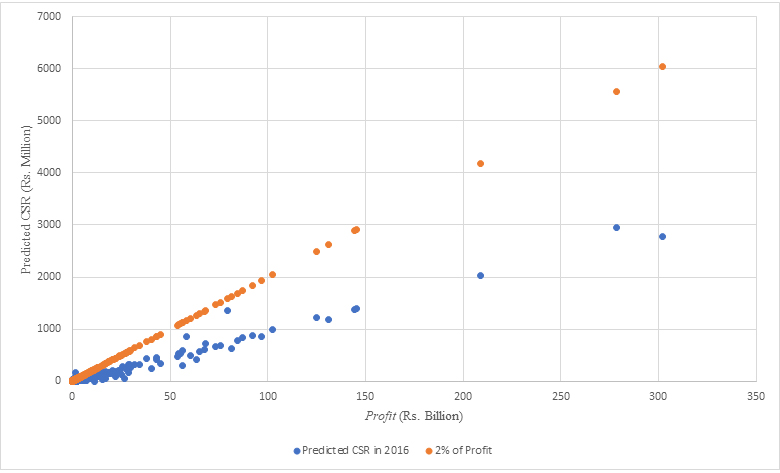 Interestingly, we find that peer effect plays a significant role in inducing both reporting of CSR activities and in determining the level of CSR by firms. On average, a Rs. 1 million increase in CSR by its peer firms leads a firm to increase its own CSR by Rs. 0.65 million. However, when we account for profits of eligible firms in 2015 and 2016, we find that the effect of peer CSR is no longer statistically significant. This indicates that after the implementation of the Act, the level of CSR was influenced by profits rather than by the CSR expenditures of peer firms. We do not find evidence of ‘crowding-out’ of other charitable activities of firms due to the Act.

Our findings suggest that by setting expectations for CSR, the hybrid mandatory-voluntary expectation of CSR under the Companies Act was effective in increasing CSR expenditures beyond levels that would have been achieved otherwise. However, in the absence of penalties, the Act has not achieved full compliance with its goals. An important question for future research is how effective these expenditures have been in contributing to the social and economic development of the country.

Are small and medium enterprises constrained by the inability to raise funds from the equity markets? Evidence from the creation of a new platform in the Bombay Stock Exchange