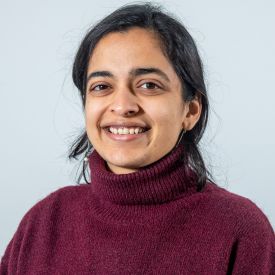 Despite studies emphasising the role of parenthood as central to gender wage inequality in wealthy countries, these wage dynamics in developing countries are poorly understood. This article looks at the association between having children and women’s wages in India. It quantifies the contribution of motherhood to gender wage inequality across urban and rural contexts. Wage reductions associated with motherhood are negligible for rural women, but large for urban women, who have better educational and job characteristics.

Gender inequality in earnings and wage rates continues to be substantial across both developed and developing countries. In wealthy countries, one of the explanations for the persistence of the gender wage gap, despite convergence in educational outcomes, has been the effects of children on the careers of women relative to men (Cortés and Pan 2020). These effects have been termed ‘motherhood penalties’ or ‘child penalties’, driven by the robust finding that motherhood lowers women’s wages and employment. However, much of this research focuses on the US and Europe; few studies focus on developing countries, and none have estimated the relative contribution of having children to gender wage inequality in India.

Urbanisation and wage inequality in India

Gender wage inequality in India is sizeable: in 2012, the median woman wage worker earned about 58% of median male wages (Duraisamy and Duraisamy 2016). There are some reasons why we might expect the determinants of gender wage inequality in developing countries such as India to be different than those in affluent countries. Much of India remains rural, and extended households are common, allowing older siblings or female household cohabitants to assist mothers with childcare. The predominance of female casual wage labour or home-based self-employment may also allow women to engage simultaneously in market work and child supervision, and incur smaller penalties for part-time or intermittent work. By investigating the role of urbanisation, education, and formal sector work in mediating motherhood’s effects on wages, my recent study (Gautham 2021) helps answer the puzzle of why the effects of motherhood on labour market outcomes differ systematically across developed and developing countries (Aaronson et al. 2017, Agüero et al. 2020).

As women gain access to higher education and formal sector employment, as is the case in urban India, they also face a new set of challenges in combining paid work and childcare. Urban women are more likely to be in employed in regular or salaried ‘skilled’ jobs and considerably better educated than their rural counterparts. About 78% of urban women are literate, compared to only 50% of rural women. Urban gender gaps in educational attainment are also narrower: the rural gender gap in literacy rates is 24 percentage points, compared to 11 percentage points in urban areas, and the ratio of women to men with at least a secondary education is 0.55 in rural areas, but 0.81 in urban areas (Census 2011). Surprisingly, these educational advantages appear to have yielded only modest wage gains for urban women: gender wage gaps in both urban and rural areas are similar, with the difference in median wages by gender at about 40-41% as of 2012 (Duraisamy and Duraisamy 2016). My results, which show that motherhood wage effects are far larger for urban than for rural women, help address this puzzle.

I compare married childless women with first-time mothers (that is, women who have just had their first child). Social norms concerning marital fertility in India dictate that newlywed couples are expected to conceive within a year of marriage (Crivello et al. 2018). Consequently, contraceptive use or efforts to delay pregnancies prior to first childbirth are negligible (Singh et al. 2020), and nearly all women go on to have at least one child within a few years of being married (Dommaraju 2009). It is therefore not surprising that married childless women and first-time mothers are identical across a range of observable characteristics. My wage estimates for first childbirth are strikingly unchanged by the inclusion of controls for a host of regional, individual, and household characteristics. I subject my strategy to a number of robustness checks: reweighting for sample selection, instrumenting additional births using the gender of the two oldest children, and controlling for individual unobserved effects.

Data from the Employment-Unemployment Schedule (EUS) of the National Sample Survey (NSS) from 2004 to 2012 reveal that children are associated with a 7% reduction in real daily wages, almost entirely driven by the urban sample (see Figure 1, left panel ).1 Rural motherhood wage penalties are close to zero while the urban penalty is large, at about 18% of total wages. Conversely, first-time fathers (both rural and urban) experience no negative wage effects following the birth of children (Figure 1, right panel). Rather, small positive wage effects occur alongside positive labour supply effects, particularly for rural men, consistent with a story of specialisation by gender. My finding that the urban motherhood penalty is large, and the rural penalty is negligible is consistently preserved across a number of robustness checks.

To investigate the mechanisms underlying these differences, I examine changes in women’s labour supply, and the role of work environment in mediating the effect of reduced/intermittent labour supply on wages. Motherhood has been shown to produce large and persistent drops in employment (Kleven et al. 2019). New time use data from the 2019 Indian Time Use Survey show that urban mothers experience higher increases in time spent on active childcare relative to rural mothers, but that these differences are small (Figure 2). 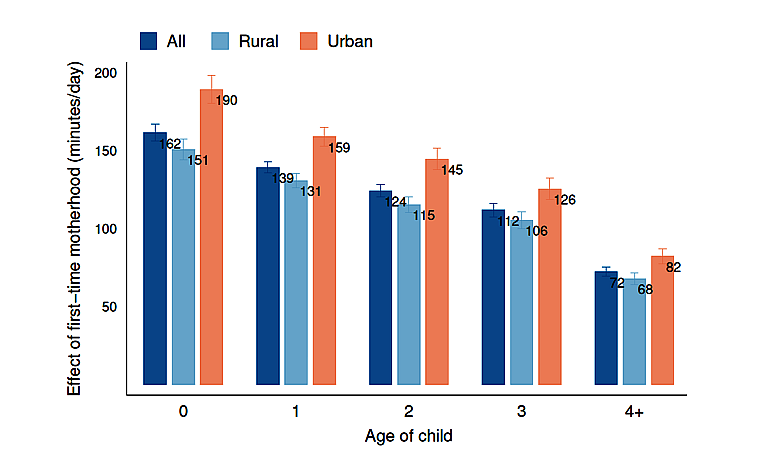 Furthermore, NSS-EUS data show that declines in wage employment after childbirth are only marginally larger for urban women than for rural women (Figure 3). The absence of large rural-urban differences in motherhood effects on childcare and wage employment is consistent with the similarity in rural-urban household structures, particularly research that finds that young married couples are about equally as likely to live in extended/joint households in urban compared to rural areas (Breton 2019, Gautham 2022). Moreover, wage employment – occurring primarily outside the home – offers limited compatibility with childcare, for both rural and urban women (Gautham 2022). 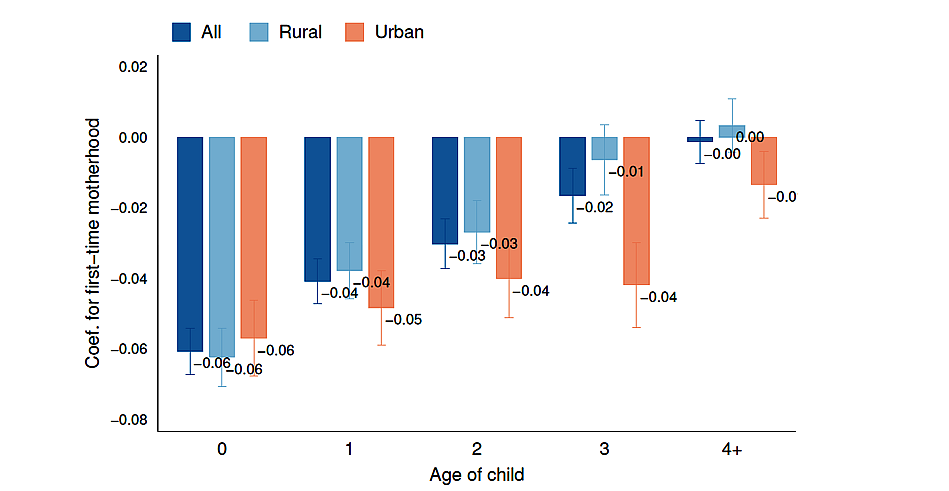 Source: Pooled NSS-EUS 2004-2012 data on married childless women and first-time mothers.
Note: Participation in wage employment is regressed on binary indicators for child age (<1, 1, 2, 3, or 4 and above), region and year fixed effects, age fixed effects, and dummies for education, caste, and household composition.

I argue however, that differences in the nature of work mediate the effects of reduced labour supply on wages: highly educated women, as well as women in regular or salaried wage work, incur a larger wage penalty after motherhood than their less educated or casual wage counterparts. This is confirmed by sub-sample estimates in Figure 4 that look at motherhood penalties by education (dividing the sample into those with a secondary education or higher, and those without a secondary education) and employment (casual wage and regular wage or salaried workers) categories. This is consistent with the expectation that returns to work experience are lower for less educated or ‘unskilled’ workers (Dustmann and Meghir 2005, Lagakos et al. 2018), and with the evidence that highly educated women experience the largest motherhood penalties (Wilde et al. 2010).

This pattern also helps explain why motherhood penalties are negligible in rural areas, despite motherhood being associated with a drop in employment for rural women. The apparent puzzle is resolved as we note that 57% of the urban sample has a secondary education or higher, compared to only 15% of the rural sample. Similarly, 72% of the urban wage sample are employed as regular wage or salaried workers, relative to only 14% of the rural sample. Since the majority of rural women have less than a secondary education, and are predominantly employed in casual wage labour, the wage costs of temporarily dropping out of employment after the birth of children are likely to be small.

Figure 4. Wage reductions for women by education and type of work 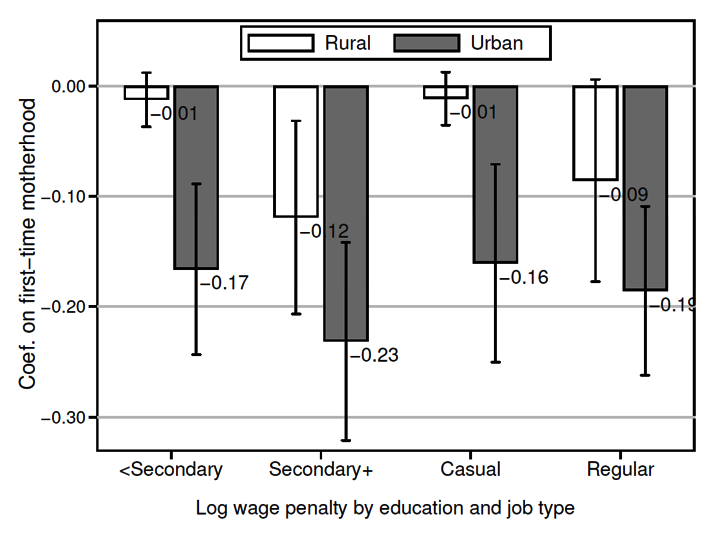 What explains the rural wage inequality?

A decomposition of the gender wage gap reveals that gender differences in human capital characteristics such as education or job attributes explain very little of the urban gap, while wage reductions after childbearing play a large role (Figure 5).2 The relative importance of these two sets of factors is reversed for the rural gap, which means that parenthood contributes to a third of the urban gender wage gap, but a very small fraction (about 4%) of the rural gender gap. On the other hand, non-child covariates, that include education and occupation, have a negative contribution to the urban gender gap, but explain roughly a fifth of the rural gender wage gap. I argue that while urban women have better educational and job characteristics than their rural counterparts, it is precisely these human capital characteristics that appear to entail higher costs for urban women after they bear children.

Figure 5. The contribution of having children to gender wage inequality 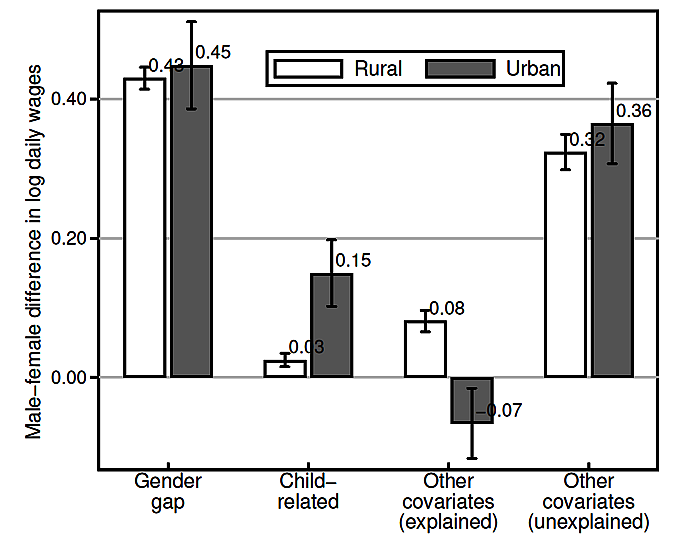 The results, taken together, show two interrelated implications of urban women’s greater investments in human capital: on one hand, they are more likely to engage in salaried or skilled work which is associated with greater motherhood penalties – children are therefore a major contributor to the gender wage gap in urban areas; on the other hand, while rural women – who have relatively worse human capital characteristics – experience smaller penalties with the birth of children, gender differences in educational characteristics lower their wages relative to men, and therefore play a more important role in explaining the rural gender wage gap.

The overall findings of this paper therefore highlight the fact that children disadvantage Indian women, but do so through different channels, depending on whether the context is urban or rural: a consideration that is important to framing policy to address women’s socioeconomic disadvantages in India. The findings also have implications for the effect of economic development in gender inequality: urbanisation, growing modern sector employment, and rising female education help narrow gender gaps in earning potential, yet also increase the incompatibility between childrearing and paid employment.