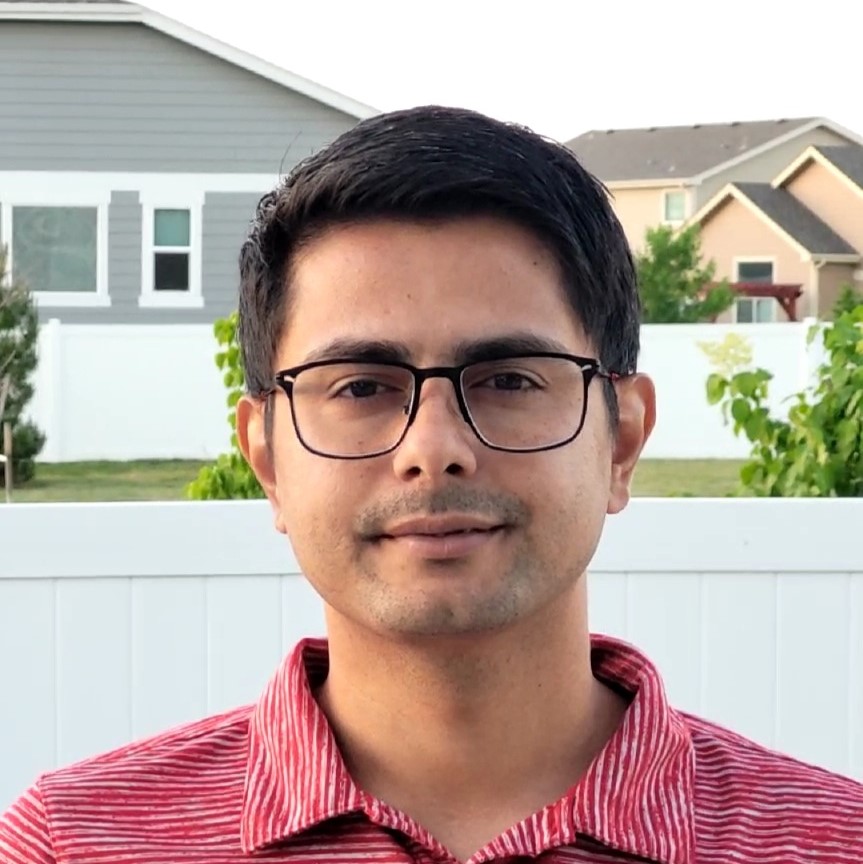 In India, there is limited access to indoor piped drinking water (IPDW) in households, and this has a disproportionate impact on women as they bear the burden of fetching water. Using 2005-2012 India Human Development Survey data, this article shows that household access to IPDW can help reduce gender differences in employment, especially in rural areas and both in terms of farm and non-farm employment.

The importance of water for personal and household use in everyday life is understood most distinctly when one does not have easy access and must wait for it and/or carry it from a distance. This unproductive burden is disproportionately placed on women and children in India. While men choose – or are socially conditioned – to assume the breadwinner role, women and children, particularly girls, are often solely responsible for home production – such as fetching water and firewood, cleaning, cooking, and general running of the household (O’Reilly 2006, Fletcher et al. 2017, Jayachandran 2019). Lack of piped water implies use of more open sources of water, which poses greater health risks for the household and more illness – leading to more unpaid work for women. Given the disproportionate burden of home production on women, and the fact that Indian households have little access to indoor piped water (Coffey et al. 2014, Choudhuri and Desai 2021), in a recent study (Sedai 2021), I show that access to piped water in the household can reduce intra-household labour and health inequality.

The basic trade-offs in the context of indoor piped drinking water (IPDW) are highlighted in the standard economic theory of time allocation and labour productivity (Becker 1965). First, the lack of IPDW affects women disproportionately through an increase in the amount of time spent on the household chore of collecting water. The argument for employment is that the time saved from not having to fetch water daily, could be reallocated to the labour market (Meeks 2017). Figure 1 plots the higher burden of water collection on women in India. Figure 2 shows the correlation between time allocated to paid work and water collection for women, by caste. 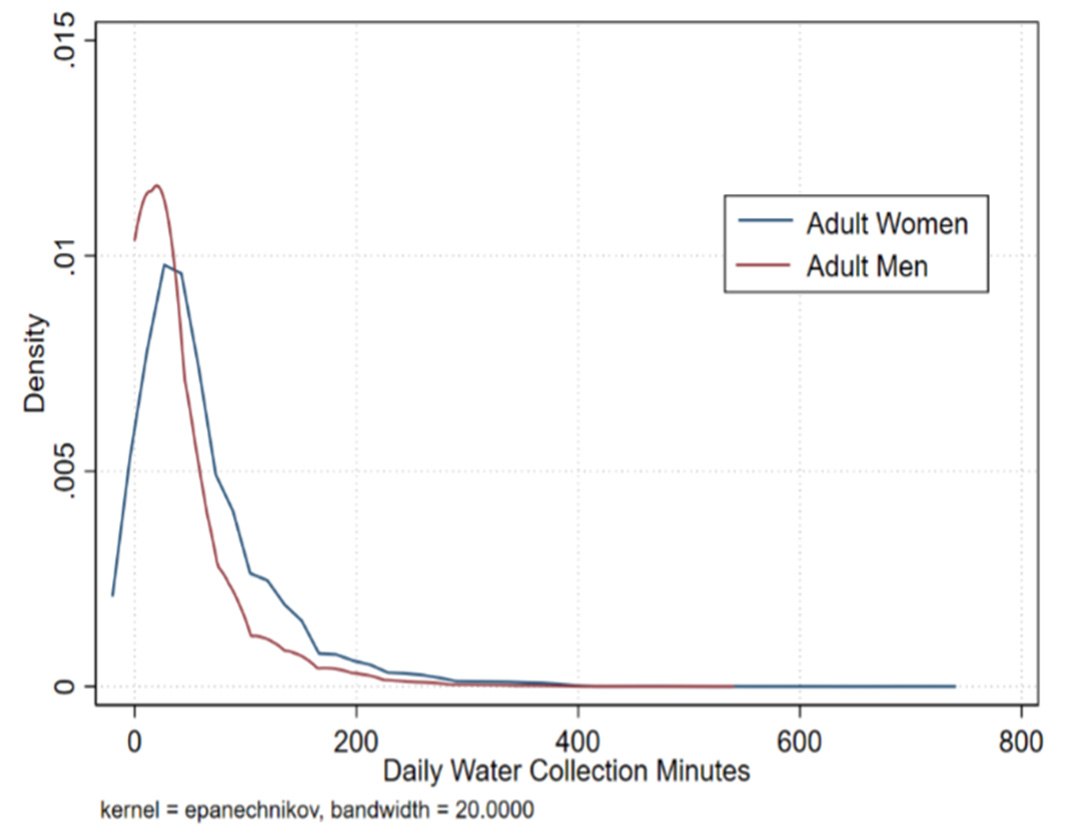 Notes: (i) The above figure shows the kernel density plot of the burden of water collection on women in India. (ii) Adult women and men include those in the ≥14 years age group.

Figure 2. Daily water collection and market work (in minutes) for Women, by caste 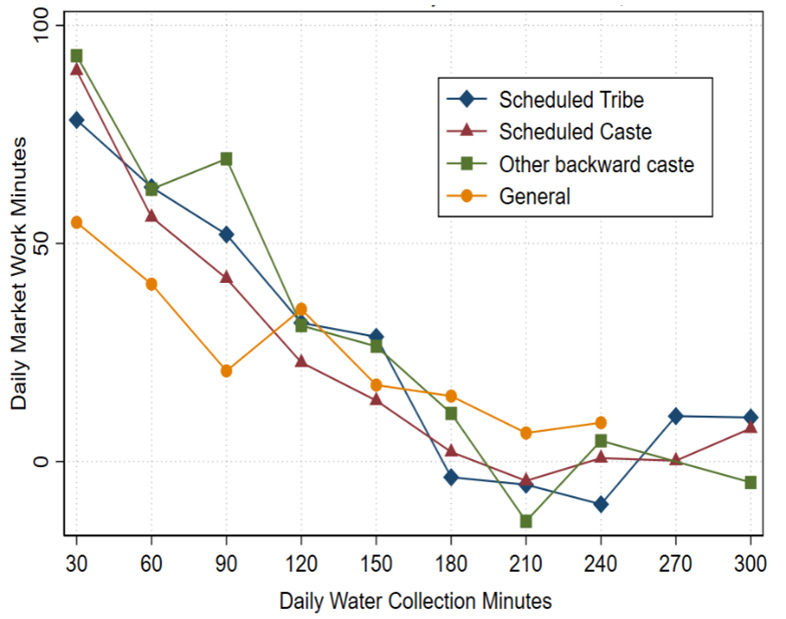 Second, the lack of IPDW leads to weak personal health due to higher surface-water contamination-based illness. Third, in the absence of IPDW, families often resort to communal and less clean sources of drinking water (such as open wells, hand pumps, or other surface-level sources), and may wash their hands less often – leading to more illness in the family. Consequentially, women spend more time on unpaid care work (such as caring for diarrhoea-stricken children who do not attend school, or elders with fever, cough and other infections) and less in the labour market.

Following the above hypothesis, I first examine the state of IPDW in India. The IHDS (India Human Development Survey) 2005-2012 and ACCESS (Access to Clean Cooking Energy and Electricity Survey of States) 2015-2018 panel data show a clear lack of adequate IPDW at the household level in India. IHDS data show that, in 2005, the average access to IPDW was 16% and 51% in rural and urban areas, respectively; while in 2012, the average access was 21% and 50% in rural and urban areas, respectively. The approximate 5% increase in IPDW in India with the National Rural Drinking Water Programme is a rural phenomenon. There are disparities between and within states in India. The average access to IPDW at the district level (IHDS-surveyed districts) in both years was around 0.25% to 0.5%. Barring a few districts (mostly in cities, and the southern and western regions of India) where the average hours of IPDW supply are between six and 12 hours, most districts, regardless of state, receive water supply for about one and seven hours a day. Overall, there is a serious lack of drinking water infrastructure at the household level in India.

I examine the effects of IPDW on employment and health outcomes at the individual, household, and village level; by gender and location. To capture the variation in access to IPDW1, I use a nationally representative panel2 of the IHDS (2005-2012)3 (Desai and Vanneman 2018). The survey also covers key gender-disaggregated labour and non-labour market characteristics (that is, unpaid care work at home), employment data such as wage salary, farm, non-farm employment, annual earnings, workdays, and self-reported health, incidence of illness, such as diarrhoea, and water collection minutes, among others at the individual level. I use a time balanced sample4 of 71,623 women and 78,751 men from each round of the IHDS survey for the analysis.

Notes: (i) IPDW and ‘water in house’ are in percentage terms. (ii) Hours of water supply, and water collection minutes are daily averages conditional on at least some time spent on water collection.

I approach the empirical analysis in the following manner: First, I examine the effect of IPDW on employment outcomes by collapsing individual-level data to the village level and controlling for village-level water infrastructure placement through exogenous village-level characteristics across time5. Secondly, I use the temporal variation in average access to IPDW in all other villages or Primary Sampling Units in a particular district of a state as an instrumental variable6 to find causal estimates with the Local Average Treatment Effects7. The instrument positively affects the likelihood of access to IPDW for a household in a district, but does not directly affect the outcomes of employment and health at the individual level, conditional on other controls. Higher average access in other villages positively affects the access in a given village through the relative ease of setting up water infrastructure once it is available in nearby areas, and through awareness of the benefits of piped water. Given the low average of access to IPDW, I anticipate that other village-level access will not have any effect on the outcome of an individual in a given village once we exclude the village of the individual in question. I do anticipate that household’s own community-level IPDW will have an impact on individual labour force participation, hence excluding one’s own village from the instrument is key to the ‘exclusion restriction’.

Notes: (i) The ACCESS survey covers rural areas in six relatively poorer states in India: Madhya Pradesh, Uttar Pradesh, Odisha, Bihar, Jharkhand, and West Bengal. (ii) The t-test shows mean difference in access to IPDW by the year of survey, 2015 and 2018. ***, **, and * indicate significance at the 10%, 5%, and 1% levels of confidence respectively. (iii) Standard deviation is a measure that is used to quantify the amount of variation or dispersion of a set of values from the average of that set.

My analysis shows that access to IPDW increases annual earnings by 13.8%, for both men and women combined. The effect is stronger for women – 17.5% as compared to 11.2% for men. As with the likelihood of employment, the increase in earnings for women is observed only in rural areas. Men, on the other hand, have increased earnings both in rural and urban areas. The positive effect of IPDW on women's earnings – and it being higher for women than men in rural areas – I argue, could be due to a combination of time, health, and productivity effects which could ease the burden of household water collection and availability of clean water for women. IPDW increases annual workdays for women by 28 days in rural areas, while there is no significant effect in urban areas. For men, there are no significant effects in rural and urban areas. Overall, the employment implications of IPDW are for rural women, but for both rural and urban men, indicating that the impediment to women’s employment in urban areas goes beyond the necessities of basic infrastructures.

I also find that access to IPDW leads to a 33.7 pp improvement in women's self-reported health9 in rural areas, and 50.6 pp improvement in self-reported health for poor women. The analysis shows that having access to IPDW reduces the likelihood of diarrhoea by 1.5 pp for the overall sample. I find a stronger effect of IPDW on diarrhoea in urban areas, a 2.2 pp reduction. This is expected due to a higher surface-level contamination of household water supply in urban areas. For the sample, access to IPDW leads to 1.48 less days of absence from school in a month. For girls, this effect is 1.55 less days of school absence in a month. The effects are also more pronounced for rural girls as compared to urban girls, 2.44 and 1.39 less days of school absence in the past month, respectively.

I find IPDW to be critical in reducing gender differences in employment, with women benefitting significantly from access to pipe water in the house in terms of employment opportunities – especially in rural areas – both on and off-farm employment. In the context of the rapid fall in women's labour force participation rate in India, 30% in 1995 to 20% in 2012 10, increasing access to IPDW among rural households, from a supply standpoint, could play a crucial role in reducing gender differences in employment opportunities in rural India. IPDW could also be important, in terms of infrastructure, to improve household health, which could in turn reduce women’s unpaid work in the household, leading to more time being available for paid labour market activities. My results show that in the case of a lack of piped water, women's economic freedom is lower than what it could be. In this light, availability of basic infrastructure such as water, electricity, toilets, and gas among other basic infrastructure could be critical to the socioeconomic empowerment for women in India.