The Indian government recently announced its plan to make India a 100% electric vehicle nation by 2030. In this article, Mudit Chordia, a Consultant at the University of Chicago Urban Labs, discusses the viability of such a plan in the Indian context.

At a recent press conference the Indian Power Minister, Mr. Piyush Goyal announced the government’s intention to make all commuter vehicles "electric" by the year 2030 (Snyder 2016). The programme is intended to be self-financing where the consumers pay zero down-payment and use the savings from fuel to pay for the electric vehicle (EV). The government expects that economies of scale will make the numbers work.

For over a century, commuters have relied on the internal combustion engine (ICE) to meet their transportation needs. ICEs depend on by-products of petroleum refining such as gasoline and diesel to power them. However, gradual resource decline and geopolitical instability in some regions worldwide have led to fluctuating petroleum supply and prices – prompting the commuters to seek alternate and sustainable transport options for the future. Another factor that discourages the use of ICEs is the growing awareness about the detrimental effects of air pollution on the environment and the health of the masses, caused primarily due to tailpipe emissions from the ICEs. The above issues have driven manufacturers to develop thermally efficient ICEs, and simultaneously explore alternate technology options such as hydrogen fuel cells, hybrids, solar power and EVs.

In contrast to the ICE vehicles, EVs have zero tailpipe emissions and are emerging as a promising alternate to ICEs in the transportation sector. While EVs are often hailed as environmentally friendly and a sustainable solution for the future they are not as green as they are thought to be – quite contrary to popular belief. The EVs are powered by battery packs. The electricity generated at the power plants is supplied through the grid to recharge these battery packs. Thus, recharging the battery draws power from the grid, burdening it, and resulting in (added) emissions from the power plants. The type of power plant (coal, natural gas, nuclear, renewable energy) and the efficiency of the infrastructure supplying the power have a bearing on the emission factor due to electricity consumption associated with the supply grid. In this article, I provide an emissions perspective of using EVs in India based on power supply grid to meet the growing transportation needs.

While we conjure schemes to incentivise EVs on roads, approximately 300 million Indians live without access to electricity (TERI, 2014).

Lithium ion (Li-ion) batteries are most commonly used in EVs and are tailored specifically for the application. Unlike starting, lighting, and ignition (SLI) batteries used in ICE vehicles, Li-ion batteries are deep-cycle and designed to give power over sustained periods of time. They are further characterised by high power-to-weight ratio, energy-to-weight ratio and energy density. Thus, a smaller battery pack will reduce the overall weight of the EV, improving the distance it covers on a fully charged battery (range). Further, the cost of a battery pack for an EV is substantially high – almost a third of the EV itself. In addition to the battery, the added complexity of the electric motor, a transmission with power-split capability (for hybrid vehicles), regenerative braking functionality, electronics and control systems, add to the cost. As the level of powertrain1 electrification increases in an EV, the portion of the cost attributed to the battery also increases. Therefore, lowering the cost of the battery pack is a key determinant in making EVs economically viable. Table 1 compares common EVs with their range and indicative prices.

Source: Compiled from websites of the respective manufacturers.

Low driving range of EVs can be compensated by adding battery packs. However, this adds to the weight and cost of the vehicle. Therefore, finding a balance between the cost and the size of the battery packs and range of EVs is essential for EV manufacturers. Encouragingly, the costs of batteries for EVs have dropped from over US$1,000/kWh (kilowatt-hour) in 2010 to US$145/kWh in 2016 making them a viable option in the coming years (Abuelsamid 2015)

The electricity generated at the power plants is supplied through the grid. For EVs, this supplied electricity can be made available at residential or public charging stations. The infrastructure requirement for setting up an EV charging station for developed countries is not as demanding as it is for developing ones. Essentially, any upcoming charging station in a developed country can simply tap into the electrical grid. However, for a developing country like India, meeting infrastructure requirements for charging the EVs is tough. Not only do the charging stations demand investment in terms of the hardware and software for infrastructure (Kumar et al. 2013), the existing quality and robustness of the grid managing the power across the country poses a challenge in the successful and sustainable use of EVs. The Indian government, through the National Electric Mobility Mission Plan, intends to sell 6-7 million EVs in the country by 2020 – saving the country nearly 2.2-2.5 million tonnes of fuel by the end of the decade (Chauhan 2014). The infrastructure for such a plan will need to be supported by India’s cumulative power supply mix of approximately 290 GWh (gigawatt-hour) (2016) – only 13% of which is supplied via renewable energy sources. Therefore, whether or not expansion of EVs in the country will lead to lowering of the green house gas (GHG) emissions needs to be assessed further.

EVs and the environment

As discussed previously, the emissions in EVs are simply transferred from the tailpipe to the power plant that generates the electricity to charge the battery packs. Hence, the souce of power generation is critical. Essentially, the cleaner the power supply source, the lesser the emissions associated with the EVs. Figure 1 shows India’s power supply mix based on the current installed capacity (Central Electricity Authority, March 2016). Figure 2 shows the global warming pollution intensity of electricity generation by fuel type (Anair et al. 2012). 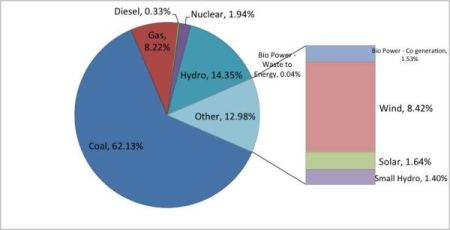 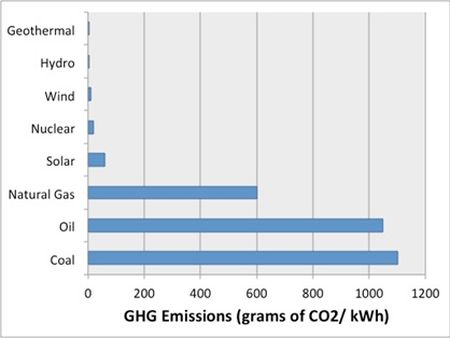 These numbers depend largely on the efficiency of the power plant and the transmission and distribution losses through the grid; hence, they are liable to vary across regions. These figures are representative of the relative emissions from various power generation sources and thus highlight the detrimental impact on the environment due to the consumption of natural resources (fossil fuels) for electricity generation. Hence, however environmentally friendly the idea of using EVs may sound, unless it is backed by an efficient grid and a clean source of fuel, the GHG emissions are unlikely to decline. Solar-based electricity has relatively high manufacturing emissions given its electricity output, resulting in greater global warming emissions than those of other renewables such as wind. Nevertheless, despite accounting for the manufacturing effects, solar-based electricity emits one-tenth as compared to natural-gas-based electricity. It is however, the unlimited supply of solar and wind energy that definitively shifts the balance in the favour of using renewable energy versus other natural resources for electricity generation. In order to compare the carbon dioxide (CO2) emissions from the ICE powered vehicles and the EVs, the life-cycle emissions must be considered.

Apart from operational life, manufacturing also forms a part of the total life-cycle emissions and must also be accounted for. For ICE vehicles, this implies accounting not only for tailpipe emissions but also the emissions associated with extracting petroleum, refining it, and delivering it to the vehicle. We therefore used the manufacturing emissions data from the Argonne National Laboratory (US Department of Energy) on the Energy Consumption and Carbon Emission Analysis of Vehicle and Component Manufacturing to estimate the emissions for a regular mid-sized car (Sullivan et al. 2010). We further looked at United Nations Environment Programme (UNEP) Risø Centre on Energy, Climate and Sustainable Development’s Assessment of Motor Vehicle Use Characteristics in Three Indian Cities to predict the CO2 emissions per vehicle based on a six-year operational life (UNEP 2014). The following assumptions were made:

The results of the above assessment are captured in Figure 3.

Figure 3. Life-cycle emissions of ICE vehicles and EVs in India 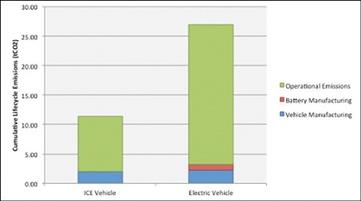 They show that manufacturing an EV results in higher emissions relative to an ICE vehicle, primarily due to the materials and fabrication of the Li-ion battery used in an EV. Thus, producing a mid-sized EV result in up to 1.6 times the emissions compared to a similar sized ICE vehicle. The industry is endeavouring to reduce the manufacturing emissions for EVs in the following ways:

Further, Figure 3 also shows that based on the present infrastructure and emission standards in India, the EVs will cause greater environmental harm as compared to the ICE vehicles over their operational life. This is attributed primarily to India’s dependence on coal for power generation (Figure 1) and hence a relatively high grid emission factor. However, same is not true for EVs in the US where no matter where one lives EVs charged on the power grid have lower GHG emissions than the average ICE vehicle today. Areas where coal makes up a large percentage of the energy supply mix (in the US) the most efficient ICE vehicles or hybrids might actually deliver greater emission benefits than EVs. In other areas of the country, where cleaner sources of electricity exist, EVs are by far the best choice (Anair et al. 2012).

Commuters are familiar with the concept of miles per gallon (mpg) or kilometres per litre (kmpl), to determine the efficiency of gasoline vehicles. The higher the mpg (or kmpl), the lesser is the fuel burnt and the lower the GHG emissions. However, as the EVs are powered by batteries, an equivalent to mpg (or kmpl) needs to be determined for comparison. This is done by using the "emissions match" concept (grams of CO2 per unit distance). As battery packs power EVs, it can thus be deduced that the emissions (from the power plant) correspond to the range (miles or km) of the EV – thus expressing it in grams of CO2 equivalent per unit distance. Thus, comparing EV emissions with the emissions from an ICE vehicle over a fixed range (miles or km) provides an estimate of the efficiency of the two types of vehicles. In such an analysis it would have to be assumed that the battery packs are charged from the same location, thus negating the effect of varying emission levels at different power generation plants and the efficiency of generation.

The present rate of natural resource consumption has led to an ecological imbalance, with the rate of consumption exceeding earth’s bio-capacity by an equivalent of 1.6 planets. While it may not be a do-or-die situation (for some), action needs to be taken on priority. On the face of it, EVs offer some relief from wanton consumption of fossil fuels (gasoline) – but in reality they only transfer this burden to the power generation plants. Accountability needs to be assigned to operators and/or facilitators incentivising the use of EVs to ensure that our power generation and supply infrastructure offer lesser dependence on the fossil fuels in the years to come for emissions to decline.

The views expressed in the article are of the author and do not necessarily reflect those of the organisation he is affiliated with.