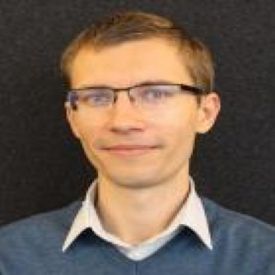 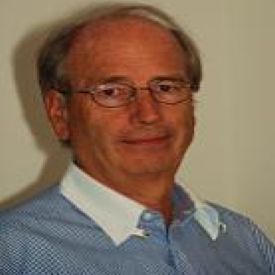 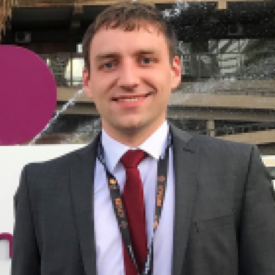 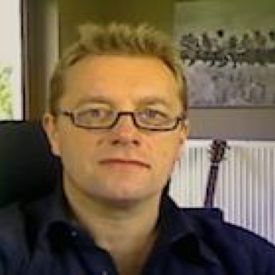 There has been much discourse on how long-term climate change will affect human mobility in the 21st century. This article estimates the long-term welfare and mobility responses to climate change. Depending on the scenario, climate change will force between 210 and 320 million people to move, mostly within their own countries. Massive international flows of climate refugees are unlikely, except under generalised and persistent conflicts. The poorest economies will be hardest hit, thus increasing global inequality and extreme poverty.

Over the 21st century, climate change will manifest itself through anthropogenic temperature changes, sea-level rise, and increased frequency/intensity of extreme weather events and natural disasters. Damages from climate change are expected to vary across and within countries according to proximity of seas and oceans, land topology, industry structure, and initial temperature levels. Developing countries that have contributed the least to climate change will be the most adversely affected, and migratory pressures – both internal and international – will presumably be strongest in the poorest countries of the world (Dell et al. 2014).

Modelling and predicting migration responses to long-term climate change is a challenging task. Beyond uncertainty about expected climate change, climate variables closely interact with other economic and political drivers of migration. In addition, mobility decisions are context-specific and are influenced by many factors that vary across regions and countries – such as country size, level of economic development, political situation, migrants’ networks, or cultural characteristics.

And last but not least, the predicted effects of climate change have barely started to materialise. Existing literature has mostly looked at the mobility responses to fast-onset climate shocks, like weather anomalies, storms, hurricanes, torrential rains, floods, landslides, and so on. Because slow-onset climate effects like global warming, desertification, and sea-level rise have only started, evidence on their implications for long-term migration is much more controversial.

In a recent paper (Burzynski et al. 2019), we investigate the long-term effects of climate change on intra-regional (rural or urban), inter-regional (rural to urban), and international migration, as well as on global inequality and extreme poverty. We carry out simulations for virtually all developing countries and the OECD (Organisation for Economic Co-operation and Development) countries. South-South migration – often between contiguous countries affected by similar long-term climate trends – is ignored.

Instead of extrapolating empirical estimates of reduced-form migration responses to weather shocks, we use a structural model of the world economy that formalises the income and mobility responses to climate-related changes in space liveability, and economic and health variables. The model distinguishes between forced displacement and voluntary migration. It accounts for the interplay between different forms of migration at various spatial scales, as well as for the high degree of heterogeneity (variation) in migratory behaviour between people of different places of origin (rich versus poor countries, rural versus urban regions, flooded versus unflooded areas), and levels of education.

The model is used to predict the joint effects of changing temperature and sea level on income distribution and individual decisions about fertility, education, and mobility. Mitigation policies are not considered; climate change scenarios are exogenous to human decisions, or reflect the outcome of mitigation policies that are not captured in the model.

The parameters of the model – reflecting technological disparities between spatial units as well as all legal and private mobility costs – are calibrated to exactly match international mobility and urbanisation data from the last 30 years. The ‘backcast’ exercises conducted with this type of model demonstrate that it accurately fits past migration trends and generates sensible projections. The calibrated model is simulated over three periods of 30 years each (2010-2040, 2040-2070, and 2070-2100) under three main climate scenarios:

Four climate damage functions are considered. Two relate to slow-onset mechanisms that are easier to anticipate and are more likely to induce adaptation strategies such as crop switching and migration. We also include two additional mechanisms related to the greater frequency of fast-onset climate shocks, which are more difficult to estimate and/or are more uncertain.

Another set of explorative results accounts for climate-driven conflicts over resources.

In Figure 1, we report the relative differences in 2100 between the intermediate (+2.1°C and +1.1 metres) and benchmark scenarios (no climate change). Focusing on the intermediate scenario, climate change will reduce income per worker by 15% in countries close to the equator and will increase it by 10% at higher latitudes. Hence, the income gap between the richest and poorest countries will increase by 25% over the course of the 21st century. Climate change increases the share of the world population living with less than 2% of the worldwide mean level of income by 0.5 percentage points. 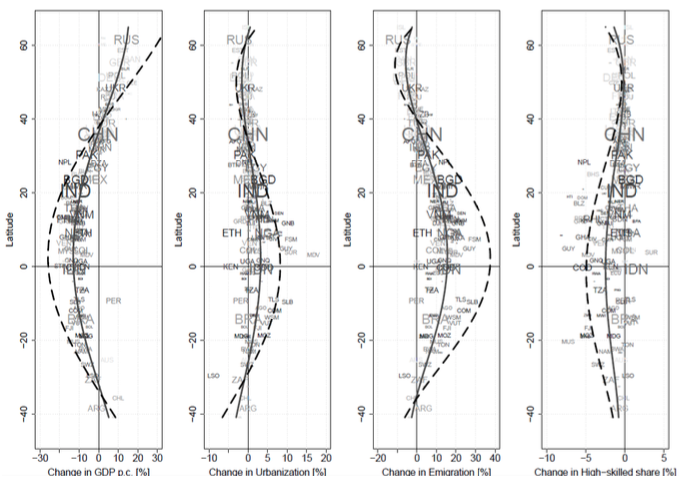 Notes: The font size of country labels is proportional to the log of population; the font lightens as level of GDP per worker rises (that is, poor countries are labelled in dark characters). The third-degree polynomial trends in solid grey lines represent the mean difference between the intermediate and benchmark scenarios as a function of latitude. Conversely, the polynomial trends in dashed black lines represent the mean difference between the maximalist (+4.1°C and +1.3 metres) and benchmark scenarios.

The second panel in Figure 1 illustrates changes in urbanisation, which attenuates the total factor productivity shocks because the average level of labour productivity is greater in non-agriculture than in agriculture. The third panel shows the rise in international emigration. Finally, the fourth panel shows how urbanisation and international migration affect human capital accumulation.

As temperatures and sea level continue to rise, the economic prosperity of dozens of millions is under threat. Under the maximalist scenario, the macroeconomic effects will be twice as large, and the share of the population below the poverty line will increase by five percentage points.

Climate migrants will mostly relocate within their country

Comparing climate scenarios to the benchmark, Figure 2 gives the number of climate migrants predicted for the 21st century for each 30-year window. We suppose that migration laws and policies do not change from those of the current period, and we first ignore climate-related conflicts.

Combining slow-onset and fast-onset mechanisms, climate change will lead to displacements from vulnerable to more viable locations in their country or abroad (Rigaud et al. 2018). Over the century, this will induce movement of 105 million adults in the intermediate scenario to 162 million adults in the maximalist, translating to about 210 to 320 million people with accompanying children.

Figure 2 also reveals that the brunt of climate change impact is in the first half of the century. By the year 2040, only 10% (maximalist: 14%) of climate migrants will leave their country. Hence, compared to other drivers of migration pressure – such as population growth differentials and the rise in educational attainment – climate change will induce limited effects on the share of international migrants to high-income countries. It will increase the immigrant share in total population by 0.4 percentage points (maximalist: 0.9 percentage points) in the US and in Europe, while demographic imbalances and the rise of education should increase migration pressure by seven to nine percentage points.

Considering additional climate variants, our model clearly suggests that forced displacements due to sea-level rise will be mostly local, while inter-regional and international mobility responses will be overwhelmingly governed by the total factor productivity responses to temperature change.

In contexts of high political and social instability, climate change could contribute to the onset and propagation of conflicts, which would produce additional waves of forced displacements. While the literature on climate and conflicts shows mixed results, Burke et al. (2015b) and Abel et al. (2019) argue that climate change’s effect on conflict occurrence is particularly relevant for countries undergoing political transformation or poverty crises.

Building on these studies, we consider a pessimistic scenario with a climate-related persistent conflict in seven Western Asian countries (that is, experiencing widespread political instability), and in ten countries with significant levels of poverty (that is, experiencing social instability). Starting from the intermediate climate scenario, this scenario almost triples the international migration response, adding 45 million international adult migrants over the 21st century (that is, 15 million per 30-year period). The long-run share of international migrants in the world population increases by 0.5 percentage points.

Climate change is sometimes perceived as a trigger of mass emigration from developing to developed countries. This is because low-latitude countries in general, and their rural population in particular, will likely be the most adversely affected. Considering plausible climate scenarios, we predict forced and voluntary movements of 210 to 320 million climate migrants over the 21st century.

However, disentangling the spatial structure of these mobility responses suggests that, depending on the climate scenario, around two-thirds to three-quarters of these migrants will relocate internally, leaving about 28 to 56 million international migrants over the century. In poor countries and regions, long-haul migration to OECD destinations is a costly adaptation strategy of last resort. In addition, the minority of cross-border migrants is positively selected along education levels, which implies that international climate migration reinforces the adverse impact of climate change.

Overall, our study suggests that massive international flows of climate refugees are unlikely, except under generalised and persistent conflicts over resources. On the contrary, climate change will most likely increase global inequality and extreme poverty. This is the real threat to all of us.