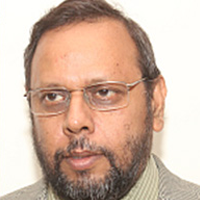 While India’s relatively high growth has not entirely been ‘jobless’, employment generation has been low, and mostly in the form of informal jobs. This column examines the employment experience of India, and says that the current thinking of Indian policymakers on employment is in line with the post-2015 global development agenda. The focus is on skill development, worker productivity and social protection.

Employment and growth: The Indian experience

In a country like India with surplus labour, the importance of employment-oriented growth is well known (Himanshu 2011, Ravindran and Unni 2007). However, given the low levels of productivity and incomes, an over-emphasis on employment generation without any regard to productivity and incomes of workers is also not desirable. Therefore, the new employment generated has to be at increasing levels of productivity so that it does not assume a poverty perpetuating nature (Papola 2012). Table 1 provides Gross Domestic Product (GDP) growth, employment growth, productivity growth, and elasticity of employment with respect to GDP since the early 1970s. Employment elasticity to GDP is the ratio of the rate of growth of employment to rate of growth of GDP. The elasticity of employment has been declining continuously, from 0.52 in the 1970s to 0.02 in the second half of 2000s. Hence, while the relatively high growth in India has not been ‘jobless’, its employment content has been low and has declined sharply since the early 1980s.

Table 2 shows that the elasticity of employment with respect to GDP growth has been declining for the primary sector, manufacturing and services. In the last two decades, employment elasticity has been the highest for the construction sector as well as tertiary sectors such as financing, insurance, trade etc.

There are two other important trends: firstly, a ‘jobless growth’ phenomenon in organised manufacturing is observed, and secondly, the additional employment generated is mainly in the form of informal jobs. The Indian experience thus suggests the need for increase in both the quantity and quality of employment. 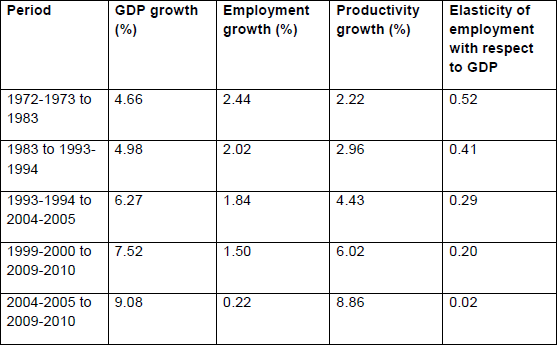 The broad vision for India and the fresh perspective of policymakers with regard to employment and growth are reflected in the 12th Five Year Plan (2012-2017), the theme of which is “faster, sustainable and more inclusive growth”. The 12th Plan draft report says that “Generation of productive and gainful employment with decent working conditions on a sufficient scale to absorb the growing labour force was a critical element in the Eleventh Plan strategy for achieving inclusive growth”. Out of the 25 targets, one target relates to employment as given below:

The 12th Plan document on employment focuses, apart from quantity, on quality of employment and skill development. According to the document, there are four objectives for employment policy. First, employment opportunities have to be expanded, with a focus on the manufacturing sector. The government hopes to make the manufacturing sector an engine of growth, and expects to generate 100 million work opportunities in the sector by 2022. Services such as information technology, finance and banking, tourism, trade and transport etc. are also expected to be major generators of employment. Second, there is a need to simplify the regulatory framework, particularly some of the labour laws. Third, problems of unemployment among specific categories such as females, educated people, minorities, Scheduled castes/ Scheduled tribes and disabled people need to be addressed. The fourth and most important one is promoting skill development (12th Five Year Plan, Government of India 2012).

In India, levels of education and skills of workers are low. Even in 2009-2010, around 52% of total workers were either illiterate or educated up to primary level. Only about 17% had higher levels of education. Skill development is also low. Overall, only 10% of the workforce in the age group of 15-59 years received some form of vocational training.

India has to take advantage of the demographic dividend. The Prime Minister, Dr Manmohan Singh, indicated that the young population is an asset only if it is (a) educated (b) skilled and, (c) finds productive employment. The skill development mission2 was launched by the Government of India in 2010 with the aim of providing skills to at least 50 million people by the end of the 12th Plan period.

One of the disappointments in the post-reform period in India relates to the slow progress in labour-intensive manufacturing. The share of manufacturing employment in India was only 11% as compared to 30-40% in East Asian countries in 2009. Several studies have shown that services sector would be an unlikely destination for the millions of low-skilled job seekers. (Ramaswamy and Agarwal 2013, Ghose 2004) Manufacturing has the capability to absorb low-skilled workers because it has stronger backward linkages3, unlike the services sector.

Finally, social protection is also becoming an important area to be considered in the post-2015 development agenda. India is advocating a social floor4 for workers, particularly in the unorganised sector.

Employment is an important goal in the post-2015 international development agenda. At the global level, there is a demand to consider “productive and decent employment” as a central goal instead of a target within a goal, with respect to the MDGs. Also, social protection for workers is advocated.

The objective states in the 12th Five Year Plan of achieving “faster, sustainable and more inclusive growth” is in line with the thinking of the post-2015 development agenda at global level. The fresh perspective regarding employment and growth in India relates to shifting focus from quantity to quality, and skill development. The focus is also on the labour-intensive manufacturing sector so that workers can be shifted from agriculture to higher productivity sectors. Social protection for workers and improving productivity of workers are emphasised. Skill development for workers is given the highest priority for achieving faster and inclusive growth. This is also important for taking advantage of the demographic dividend in India.

This column is based on a paper that was published in the IDS Bulletin September 2013.