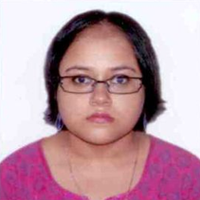 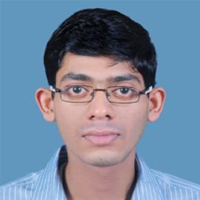 While India’s solar power generation capacity has increased dramatically in recent years, the rate of deployment of rooftop solar is still insufficient to achieve the national targets. In this post, Goldar and Paul recommend the use of municipal bonds to support the scale-up of rooftop solar. Applying their proposed bond model to Surat and New Delhi, they illustrate how rooftop solar can become competitive and benefit different types of consumers in these cities.

Sustainable financing of urban growth has always been a vexing issue in India. While the demand for urban services and infrastructure development has gone up significantly, the same has not happened with the capacity of municipal corporations and urban local bodies (ULBs) to cater to this. Although urban India houses more than 33% of the total population of the country and contributes more than 66% of the national income (Tewari et.al 2016), ULBs have narrow revenue base and are heavily dependent on state and central transfers, severely constraining their ability to invest in urban infrastructure or service delivery.

With renewed interest in municipal bonds, the discussion on financing of urban growth is back to the forefront. The successful listing of a bond issue by Pune Municipal Corporation and Greater Hyderabad Municipal Corporation (GHMC) is a positive development. While there is wide agreement on the potential of capital markets for financing urban infrastructure, the idea is yet to gain traction with most of the ULBs. This is because a successful and viable municipal bond issue is heavily dependent on credit ratings, efficiency of project management systems, government support, etc. In such a scenario, not every ULB may be able to tap into financial markets for large-scale infrastructure projects for basic public service delivery such as water supply or sanitation. For sustained and continued engagement with capital markets, ULBs first have to explore ‘soft landing’ options that are less risky and have assured revenue streams. In this context, renewable energy is an attractive option and presents itself as an area that warrants increased attention of ULBs.

Incidentally, the energy sector in India is also seeking sustainable models for financing its rapid growth in the renewable space. Given the ambitious INDC (Intended Nationally Determined Contributions) target1, we require rapid growth of this segment by attracting a substantial amount of investment. Growth has been very promising in recent years with the share of renewable energy now accounting for more than 20% of India’s total power mix (Central Energy Agency, 2018). However, in order to meet the lofty goal of 175 GW by 2022 (Ministry of New and Renewable Energy, 2017) set by the Government of India, the wind power capacity needs to double from the current level, and solar power capacity has to be scaled up by more than seven times, in the next five years. Evidently, the onus lies on solar power, which has experienced dramatic growth in recent years owing to fall in solar tariff and significant reduction in costs. It is at this juncture that rooftop solar acquires prominence. Despite being the fastest growing renewable power segment in India (capacity increased from 117 MW in 2013 to 1250 MW in 2017), the deployment rates of rooftop solar are still insufficient to achieve national targets (40 GW). This is primarily due to the decentralised nature of rooftop solar installations and lack of access to low-cost capital. Other challenges include high upfront costs of installation, poor implementation of net-metering policies2 high price of energy storage, and consumer perceptions of risks regarding technology and developers. As per our estimations, to meet the outstanding 38.75 GW rooftop solar target by 2022, a total of Rs. 2.07 trillion (US$31.8 billion) is required in addition to current subsides, and the requirement would be Rs. 2.52 trillion (US$39 billion) if we exclude subsidies (Trivedi et al. 2018).

In a research study jointly undertaken by ICRIER (Indian Council for Research on International Economic Relations), Stockholm Environment Institute (SEI), and Climate Policy Initiative (CPI), we explore the potential of municipal bonds3 for financing the renewable energy expansion in India, particularly rooftop solar systems, and the issues involved. In this post, we propose a bond model and illustrate how ULBs can promote investment in renewable energy in their respective geographical areas, through case studies of two separate urban contexts in India – Surat in the state of Gujarat, and New Delhi Municipal Corporation (NDMC).

In the proposed model, the municipal entity would play the role of a financial aggregator for renewable energy project developers. Funds available through issue of a municipal bond would be disbursed to project developers via a Public Private Partnership (PPP) approach (see figure 1). By aggregating projects, the model would allow a project developer to better access debt capital. Here the municipality would form a special purpose vehicle (master SPV) or a corporate municipal entity, which issues a revenue bond and then enters into a capital lease agreement with the developers who form project SPVs. The project SPVs would then sign a power purchase agreement (PPA) with consumers to sell electricity from the rooftop solar systems. The utility of the master SPV as a separate limited company, delinked from general financials of ULBs, has already been proved in the Smart Cities Mission. As city-level SPVs were compulsory in the Mission, such an approach is already part of our urban governance structure and all the city-level stakeholders are used to its management practices. 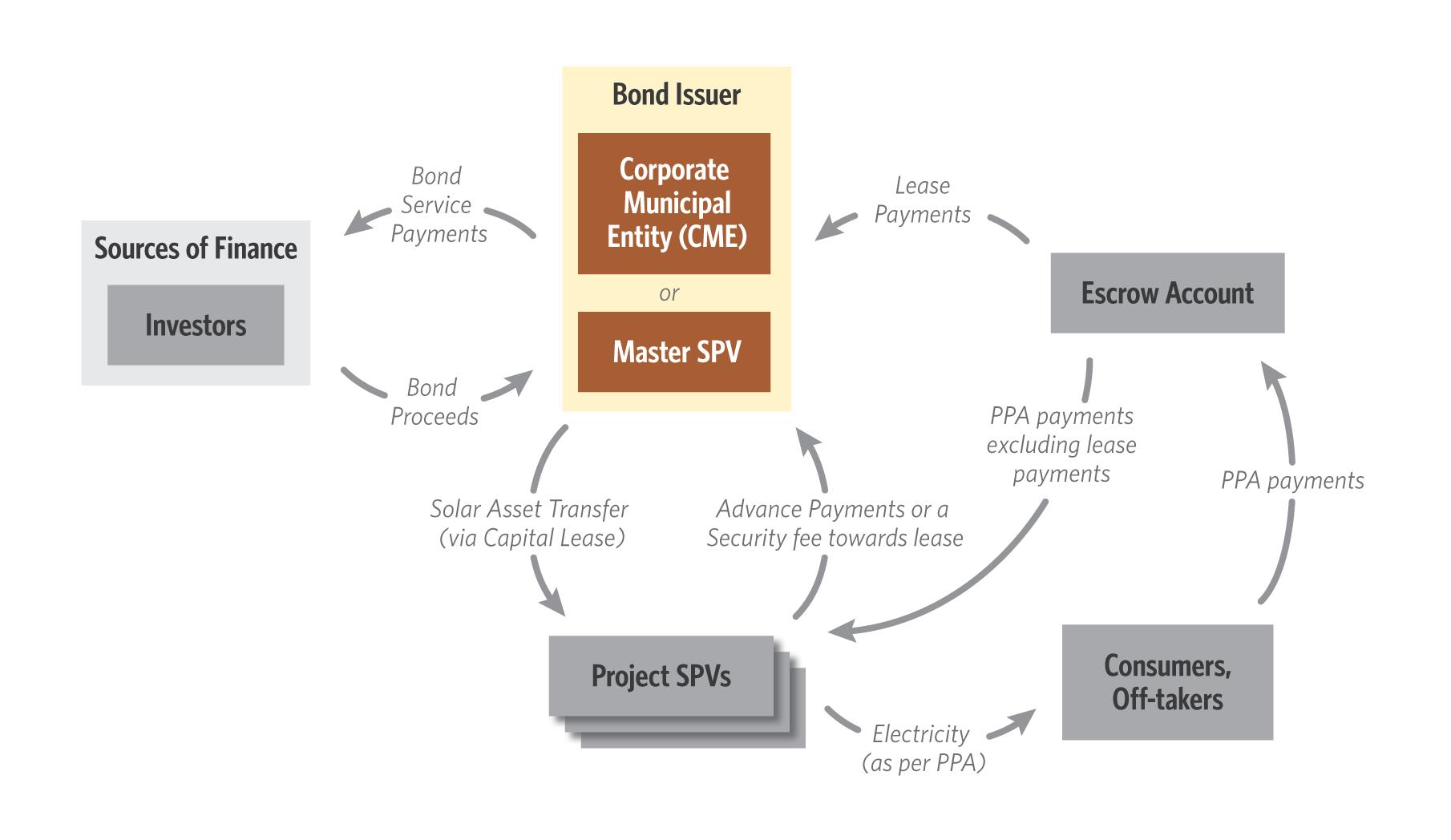 Also the municipal bonds can potentially make rooftop solar power less expensive than current electricity tariffs. Figures 2 and 3 illustrate the estimated impact of municipal bonds on costs for rooftop solar in Surat and New Delhi. We can see that there are significant gains to be realised if municipalities were to raise debt base capital through municipal bonds. The gains are more widespread in New Delhi where existing tariff levels are much higher than in Surat for all consumer categories. While in Surat, bonds are more attractive to industrial and consumer categories, in Delhi potential gains are huge for all consumer segments./p>

Figure 2. Comparison of existing electricity tariffs with rooftop solar LCOE4 with and without municipal bonds, for Surat

Figure 3. Comparison of existing electricity tariffs with rooftop solar LCOE with and without municipal bonds, for New Delhi

At this point it is also necessary to take note of the gap between local potential and national targets. As our study shows, when given state-level targets are further devolved to city levels5 the current targets drawn up in solar city plans are quite low and can be scaled up provided capital needs are addressed. Moreover, the rooftop solar deployment in India relies largely on dominant CAPEX (capital expenditure) model where consumers have to put in upfront costs, operate and manage systems. This limits the customer base to a few high net-worth individuals with disposable income and leaves out a vast majority of potential customers. An OPEX (operating expenditure)6 or third-party financing model is a promising alternative but has not picked up in India owing to constrains in accessing debt capital by developers. Moreover, disaggregated entities such as households and industries would be more likely to enter into long-term power purchase contracts if the project had the municipal government’s involvement in it. A noteworthy example in this respect is the rooftop solar promotion programme of Surat Municipal Corporation, wherein the city witnessed a massive rise in adoption of rooftop solar due to engagement of the Corporation as a facilitator and demand aggregator for Solar Energy Corporation of India (SECI) and Gujarat Energy Development Agency (GEDA).

Access to cheap finance and proactive policy support can greatly aid achievement of India’s ambitious targets. The national solar city programme and other scattered state-level initiatives, which guide the rooftop solar deployment efforts in the country, are not sufficient to add up to the 40 GW target. This warrants innovative interventions and ULBs are best placed to lead the efforts. Our study acknowledges that there are multiple implementation barriers to solar bond issue. Nevertheless, a municipal bond issue also offers the ULB a number of opportunities. Most importantly, it would allow the ULB to build capacity in project management and gain experience in raising capital from financial markets. Past experiences have proved that efficiency of project management systems, procedures to reduce time delays and cost overruns, and a healthy revenue system is essential for constant engagement with capital markets. A municipal solar bond in this respect could be a less risky project as the revenue streams are largely assured and constant, and would prepare municipalities for larger issues in the future. Such an approach also aligns well with the ongoing urban missions that encourage municipal governments to take on more responsibilities in the realm of urban development.