Is small beautiful? A critical evaluation of MSME policy and performance in India

Micro, small and medium enterprises (MSMEs) have significance in a labour-abundant country like India, and various policies are in place to promote the sector. Analysing MSME data from various sources, this column shows that the structure of manufacturing MSMEs has changed significantly in the last decade: the share of capital-intensive industries in output has increased; labour productivity remains very low with possible replacement of labour with capital.

In a labour-abundant country like India, the importance of micro, small and medium enterprises (MSMEs) cannot be overemphasised. Under the ‘Make in India’ campaign launched in 2014, which aims to promote Indian manufacturing, a slew of benefits have been announced for MSMEs in terms of reimbursement of technology acquisition costs, rollover relief from capital gains tax, and measures to facilitate the flow of formal finance to the sector − in addition to sector-specific initiatives.

India stands apart when compared to many developed and developing economies due to the reservation policy support provided to small-scale industries (SSI). Despite all these attempts to give a boost to the MSME sector, data and research show that the productivity of small firms in Indian manufacturing is abysmally low relative to larger firms. This has created a conspicuous ‘missing middle’ in the size structure of firms, which deters employment generation and dynamism in Indian manufacturing (Mazumdar and Sarkar 2009). The ineffectiveness of the industrial policy designed for the MSME sector warrants special attention of policymakers, and a systematic, in-depth analysis of the profile of the sector to understand the post-policy impact. Such attempt has been minimal so far due to the non-availability of time-series1 data for the sector from one single source. The quinquennial2 NSS (National Sample Survey), which provides data on various characteristics of unincorporated manufacturing entities, comes with considerable time lag. The same is true of the All-India Census of MSMEs, which was last conducted in 2006-07.

Based on analysis of MSME data from various sources for the latest years available in each source, I find that the structure of manufacturing MSMEs has changed significantly in the last decade. Not only has the share of capital-intensive industries within the output composition of manufacturing MSMEs increased, labour productivity remains very low with possible replacement of labour with capital within manufacturing MSMEs. This is often not given due importance in policy formulation. 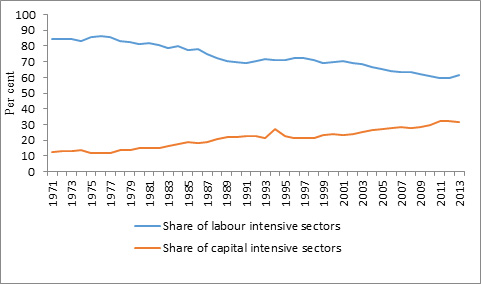 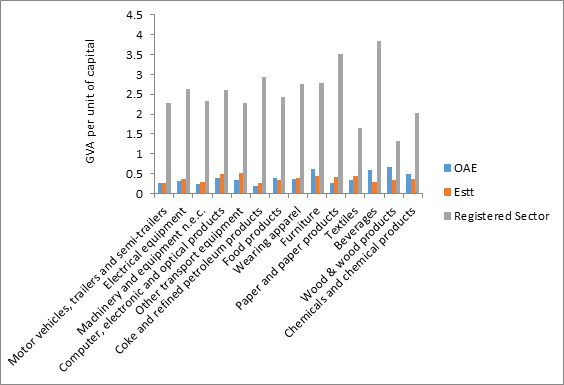 I calculate total factor productivity (TFP) for a sample of MSME firms obtained from the CMIE (Centre for Monitoring Indian Economy Pvt Ltd) prowess database, for the period 2002-2016.The overall trend in TFP suggests that though the TFP of MSMEs was close to non-MSMEs within registered manufacturing, from 2010 onwards there was a significant drop in TFP of MSMEs (Figure 3). In addition, I find that within unregistered manufacturing, TFP growth was negative in the case of motor vehicles, machinery, rubber and plastic products, basic metal, textile and wearing apparel, during 2006-2011.

The special policy support provided to small firms has its economic rationale embedded in the facts that (i) these firms are more labour intensive;( ii) in a labour-abundant country, these firms use the scarce resources in a more productive manner; (iii) without intervention, small firms face higher factor costs which results in a sub-optimal size of the SSI sector in the economy (Little 1987, Hussain 1997). The policy support to the MSME sector in India can be classified into (i) promotional versus protective; (ii) one-shot versus continuous; and (iii) discretionary versus non-discretionary (Tendulkar and Bhavani 1997). It is worth mentioning here that the earlier reservation policy for the SSI sector has been criticised for distorting the size structure of firms within Indian manufacturing, and deterring the growth of small firms by providing perverse incentive to these firms to remain perpetually small (Mohan 2002, Nataraj et al. 2017). As a result, such protectionist policies were gradually replaced by promotional measures after liberalisation. In recent years, the policy for MSMEs in India has largely been promotional and discretionary in nature. However, successful implementation of any discretionary policy depends crucially on careful identification of target firms, which is very difficult due to the information asymmetry present between various government agencies and the beneficiaries. Possibly as a result of this, MSMEs which are located in major urban centres are found to have significantly better productivity as compared with MSMEs located in remote areas (Figure 4). Ensuring outreach of various policies towards its intended beneficiaries would require a concerted effort of various government agencies responsible for designing such policies. In this context, the ‘Udyog Aadhaar’6 initiative is a welcome move. 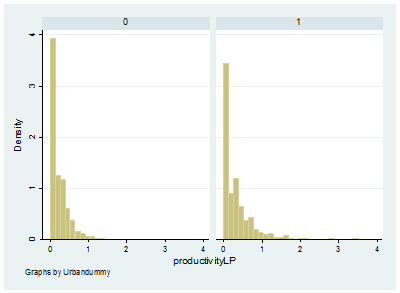 Further, the analysis brings out the fact that despite being labour intensive in nature, the labour productivity of manufacturing MSMEs is significantly low compared to large firms. TFP, which is an indicator of technical progress, also exhibits a sharply declining trend for manufacturing MSMEs in recent years. In addition, not only has there been a structural shift in the output composition of the MSME sector towards more capital-intensive industries, there has also been a possible replacement of labour with capital in major labour-intensive industries within MSMEs. All these facts suggest that instead of solely emphasising on the labour-intensive production process of MSMEs, policies should be designed such that the sector achieves its efficient scale of production and dynamism. Though the need for factor market intervention (Ministry of Micro, Small & Medium Enterprises, 2015) to ease supply-side constraints for small firms cannot be denied, it also becomes important to recognise the structural change in the sector in favour of capital intensity, which could be due to increased participation in the international trade. The manufacturing MSMEs’ abysmal low labour productivity increases the effective labour cost, as a result of which there is labour displacement in major labour-intensive sectors within the manufacturing MSMEs. Hence, at this juncture, a policy aimed at creating jobs within manufacturing needs to focus on improving the labour productivity of the MSME sector. Undoubtedly, India’s poor performance in creating a broad-based vocational education system remains a major hindrance in achieving this objective.