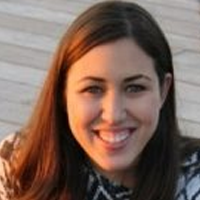 Women as citizens show up and speak up less in political spaces than men across the globe, particularly in lower- and middle-income countries. This article studies the persistent gender gap in political participation in Madhya Pradesh, India and finds that the reason for this is not simply the unequal distribution of resources, inefficient household division of labour, or gender-exclusionary institutions, but their combination along with social norms that preclude women’s extra-household political networking.

Women around the globe, but particularly in many developing contexts, remain absent and invisible in political institutions and dialogue. As of 2015, women’s suffrage in democracies was nearly universal and more than 130 countries had gone so far as to implement political quotas for women (Hughes et al. 2019). Gender quotas, for example, have been shown to increase women’s representation, shift policy towards women’s interests, and improve gender equality along other dimensions (Lott and Kenny 1999, Chattopadhyay and Duflo 2004, Miller 2008, Beaman et al. 2009, Catalano 2009, Ford and Pande 2011, Clayton and Zetterberg 2018).

Yet women as citizens show up and speak up less in political spaces than men across much of the globe and particularly in lower- and middle-income countries. Figure 1 depicts this stark gender gap. In 2016, I conducted a survey with 5,371 women and 2,399 men in rural Madhya Pradesh and found that on average men were 50 percentage points more likely to say that they had attended a village assembly meeting and 30 percentage points more likely to have contacted the local leader. Moreover, this gender gap in political behaviour is orders of magnitude larger that the caste gap in political behaviour, which has been the focus of much research. Representative survey data from all of India shows that the average attendance rates at village assembly meetings range from 25-33% for men and 6-11% for women across five caste sub-categories (Desai et al 2011), revealing that participatory differences across caste are much less distinct than differences across gender. 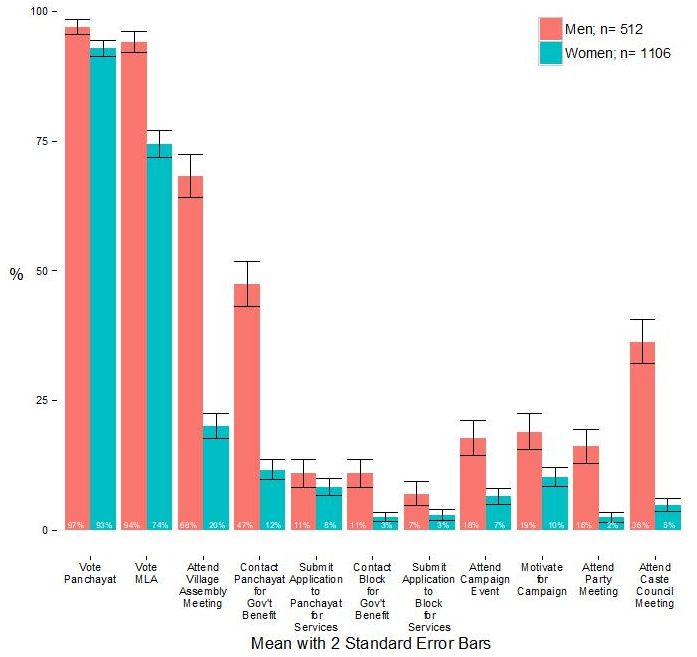 Notes: MLA stands for Member of Legislative Assembly. Standard error is a measure of precision of the sample mean (average).

Alternative traditional political economy models, as argued principally by Becker (1981), have focused on the household instead of the individual and explain women’s lack of participation as the efficient outcome of the household division of labour. In this model, women bear the responsibility for the household because of a marginal advantage in childcare and corresponding socialisation patterns. Households’ interests are therefore perfectly aligned and households behave as unitary actors. One implication of this model is that this economic division of labour could also generate a political division of labour with men representing the household’s interests in political spaces because of greater access to relevant resources and subsequent lower costs of participation.

The present experiences of women in low- and middle-income democracies pose a challenge to these models of political behaviour: while women’s political participation remains below that of men, it varies importantly within and across countries. For example, in the specific case of India, women’s political participation remains low on average but grassroots women’s movements have emerged and effectuated important political change. A notable example is the Gulabi Gang in India, an informal group of women in North India known for their pink Saris that have fought to reduce domestic violence and have become a political force to be reckoned with.

How can we explain the persistently low political participation of women across many developing countries while accounting for the growing number of contradictory cases?

To begin, several relevant facts must be incorporated into models of gendered behaviour in developing countries. First, even in regions where divorce is rare and a strong economic division of labour persists, intra-household preferences often diverge (Gottlieb et al. 2016). In recent work, I have argued and demonstrated how gendered preference differences can emerge from the economic division of labour itself (Artiz Prillaman 2018). Take, for example, the public provision of water. While the entire household benefits from the provision of water, women, in their role as household caretaker, bear the responsibility for the collection of water. They, therefore, have a greater stake in the quality and location of water provision than their husbands and are more likely to prioritise the provision of water in their political demands. Intra-household preference differences can also derive from gender-specific experiences (for example, violence against women) or simply because women have a desire to increase gender equality.

The importance of social connection

Motivated by these facts and the variation in women’s political participation in India, in a recent paper (Artiz Prillaman 2018), I study the case of rural Madhya Pradesh to ask why most women remain absent from political spaces. My theoretical model centres on the household and the nature of political coordination in patrilocal, non-nuclear families, arguing that most households will coordinate their political behaviour and behave as a unitary actor. This creates a household political division of labour, where men act as the political agent of the household and vocalised household preferences skew in favour of men’s interests.

Why would women coordinate their political behaviour with that of the household? I argue that the degree of women’s social isolation/social connectedness shapes their capacity to coordinate their political behaviour outside the household. Gender-biased social norms limit women’s role outside of the household (Chhibber 2002). Often the woman’s space is seen as the house whereas men have the freedom to engage in community institutions, and politics in particular is seen as a man’s space. This division is enforced with substantial mobility constraints: 72% of women in a representative survey from India reported having to ask permission to visit a friend or family member in their village and 23% said that even if granted permission they would not be allowed to go alone (Desai et al. 2011). All of this is enforced through a fear of backlash, often through social sanctions, and even violence.

This political division of labour, therefore, under-represents women’s interests and suppresses women’s voice as a result of disparities in economic bargaining power, intra-household resources inequalities, and gender-biased social norms, creating a system of gender-based insiders and outsiders in politics.

When women’s social networks, however, shift in such a way as to include more women, women’s political participation is likely to increase. To test this relationship, my research conducted in Madhya Pradesh leveraged a natural experiment that created as-if random variation1 in exposure to an NGO (non-governmental organisation) programme aimed at mobilising women into Self-Help Groups (SHGs). SHGs are informal associations of 10 to 20 women from the same village that act as informal savings and credit institutions. SHGs meet frequently and non-members are not allowed at these meetings. As a result, SHGs give women access to economic networks of only other women. Participation in these SHGs yielded substantial increases in women’s non-voting, local political participation: women that had participated in an SHG were twice as likely to attend village assembly meetings or make a claim on local leaders. Data, along with corroborating interview evidence, suggests that this positive effect is largely the result of women’s coordinated collective action to jointly demand representation and combat backlash from men. I also find suggestive evidence that SHG participation helped to build women's political knowledge, confidence, and civic skills by providing them with a space to experiment with their political voice (Artiz Prillaman 2018, Artiz Prillaman 2019, Parthasarathy et al. 2017).

Women’s representation as citizens in political spaces is important on normative grounds of political inclusion and on political economy grounds because it is likely to cause policy change. We know that when women enter politics, policy changes. In India, women’s representation in local elected offices increased the provision of certain public goods (Chattopadhyay and Duflo 2004). In Latin America, women’s political movements have yielded the greatest impacts on policies aimed at combating violence against women (Htun and Weldon 2012). And in sub-Saharan Africa, women’s representation in national office is associated with greater political engagement by women (Barnes and Burchard 2013). Yet, our understanding of women’s decisions to participate in politics has for a long time failed to recognise that the constraint to doing so is not simply lack of resources, a household division of labour or the rules of divorce, but the combination of all of these with social norms that preclude extra-household political networks. Once we recognise this, it becomes possible to explain and respond to the persistent gender gap in political participation across developing democracies.