Why Indian education needs to get back to reality

What is the best advice to give an Indian education department official? This column argues that the best thing officials can do is drop the assumptions and stick to reality – otherwise many children will be missed out and left behind.

The education system in India, like in many other countries, is built on a set of assumptions. The recent Right to Education (RTE) Law is also based on assumptions. Let’s review some of these assumptions in light of recent evidence from across India (ASER data from 2005 to 2011). ASER – the Annual Status of Education Report is the largest annual nationwide survey done by citizens to understand the status of schooling and learning in India. ASER is done in every rural district in India every year.

The reality is that attendance varies a lot across the country. Various studies have pointed out that on an average day, the probability of a child being in school ranges from 90% or more in Himachal, Maharashtra, Karnataka, Kerala or Tamil Nadu to less than 60% in states like Bihar, Uttar Pradesh, Madhya Pradesh and Jharkhand.

Assumption 2: Children are in school from age six onwards. India’s RTE Law "guarantees" education from the age of six to the age of fourteen.

This law must be based on the assumption that children enter school at the age of six. According to ASER 2011, the reality is that in rural India, around 60% of all five year olds are enrolled in school. These figures vary by state but a very high proportion of 5 year olds are in school in many states like Punjab (77%), Uttar Pradesh (65%), and Rajasthan (76%).

Assumption 3: Children in a given grade/ class are homogenous (of a similar age, ability etc.).

The RTE Law refers to age-grade mainstreaming assuming again that children of a particular age are to be in a particular grade.

The reality is that our classrooms are very diverse. Let us take an example: Grade 4 in Bihar. Based on the assumption that children enter school at age six, we presume that the ‘right age’ for Grade 4 is about nine or ten. ASER 2011 data from Bihar shows that 51% children in Grade 4 are of the ‘right age’ (nine or ten) but the rest of the children (the other half of the class) are younger or older. If the rationale for ensuring that children of the right age are in the right grade is based on principles of child development, then half of all children in Bihar are not in the ‘right grade at the right age’.

Being in Grade 4 presumably implies that the student is with other students who are in Grade 4 and are taught by a ‘Grade 4 teacher’. The reality is that in 67% of all Grade 4 classes in rural India, Grade 4 children sit with children of at least one more grade if not more. This is based on a survey of over 15,000 government schools with primary sections.

The RTE assumption that children must be ‘mainstreamed’ into an age-grade appropriate class again is built on the notion of ‘homogeneity’ by grade. The reality is that children in the same grade at a vastly varying levels of learning. Take for example Grade 5 according to ASER 2011 for rural India: The highest level of the ASER reading test is a long paragraph at Grade 2 level of difficulty. We find that 48% of children in Grade 5 are able to read this text fluently. It is possible that some of these children are reading at a higher level as well. However, we should be seriously concerned about the half that in Grade 5 not yet able to read at Grade 2 level. Looking carefully at this half, we find that in Grade 5 there are 15% children who are as yet not able to do more than simply recognise letters, another 13% can read simple words but cannot effectively tackle simple sentences, while 24% children can read simple sentences but cannot fluently read at Grade 2 level. The ‘age-grade’ assumption also implies that a child in any grade/class has mastered content and skills expected in previous grade/class. But ASER and other data shows that this is not the case; most children are at least two grades behind, if not more.

The reality is that the textbook level for a specific grade is too difficult for most children. Look at the case of Rajasthan, in Figure 1 below 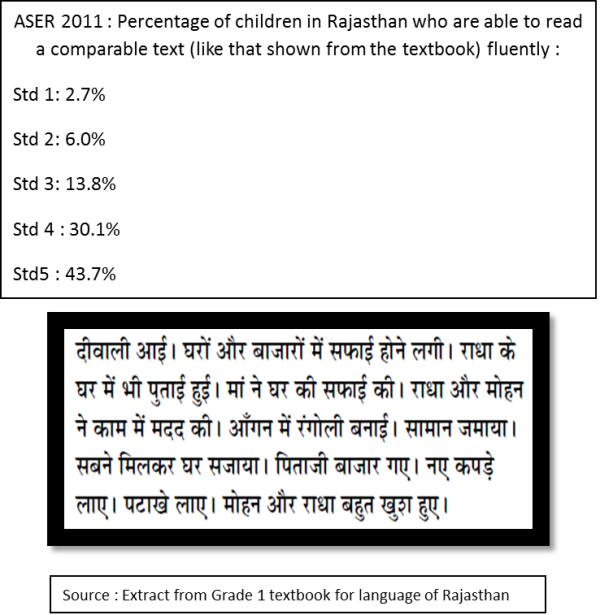 The data indicates that in Rajasthan, almost 3 out of 4 children after four years of schooling cannot read what is expected of them in Grade 1. Sadly, the only text or reading material that almost all children in India have access to is the school textbook. (Only one-fifth of rural families have anything else to read at home other than textbooks SER 2011.) But the age grade textbook is far above the level of most children.

Assumption 5: Every year the country’s capability to deliver education is improving.

The reality is that we are in a ‘big stuck’ . Figure 2 below shows that learning levels have not improved in the last seven years. Further, Beatty and Pritchett (2012) using several large-scale data sets from India including ASER show that learning profiles over time are ‘flat and shallow’. This means that learning levels are low and not much ‘value is added’ as children move through the elementary grades each subsequent year. 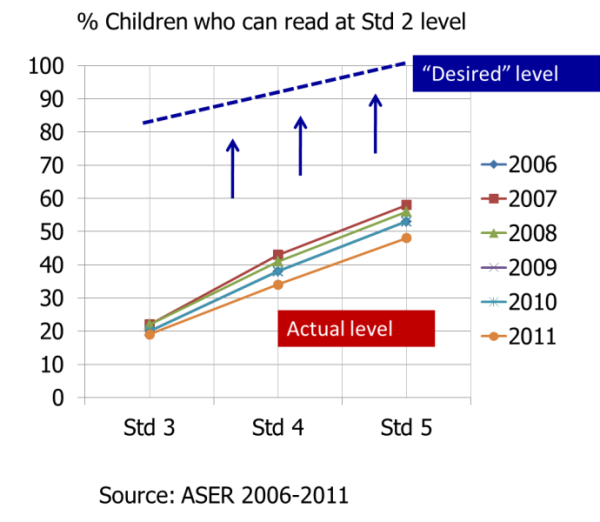