The recent release of the ‘Rapid Survey On Children’ report presents an opportunity to take a fresh look at the state of Indian children. Based on a simple Child Development Index constructed for 2005-06 and 2013-14, this column finds that Kerala, Tamil Nadu and Himachal Pradesh are at the top. Other states – even Bihar – can catch up, but only if they learn the right lessons from the leading states.

Children have been out of focus in recent debates on public policy in India. Even when budget cuts threaten to undermine child nutrition programmes, the mainstream media barely takes notice. The recent release of summary findings of the ‘Rapid Survey On Children’ (RSOC) 2013-14 is an opportunity to correct this bias and take a fresh look at the state of Indian children.

Helpfully, RSOC figures are comparable with similar data from the third National Family Health Survey (NFHS-3) for 2005-06. In earlier work published in Economic and Political Weekly, we used NFHS-3 data to construct a simple child development index analogous to the Human Development Index (HDI), but based on child-related indicators (Drèze and Khera 2012). This can be done again, with minor modifications, using NFHS-3 as well as RSOC data. This time, the four component indicators are: proportion of children fully immunised; female literacy in the age group of 10-14 years; proportion of births preceded by an ante-natal checkup; and proportion of children who are not underweight. In the absence of survey data on age-specific female literacy rates, we use Census data from 2001 and 2011, respectively, for the literacy indicator. The results are presented in Table 1 below. 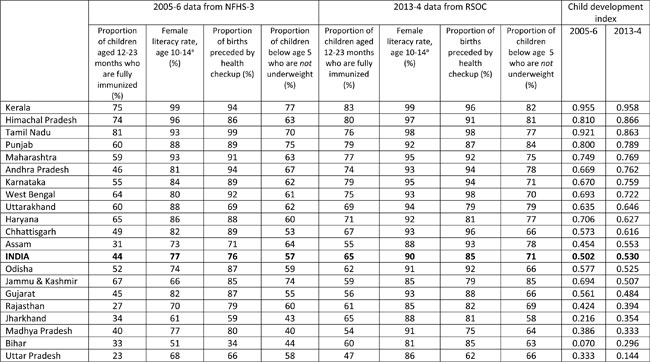 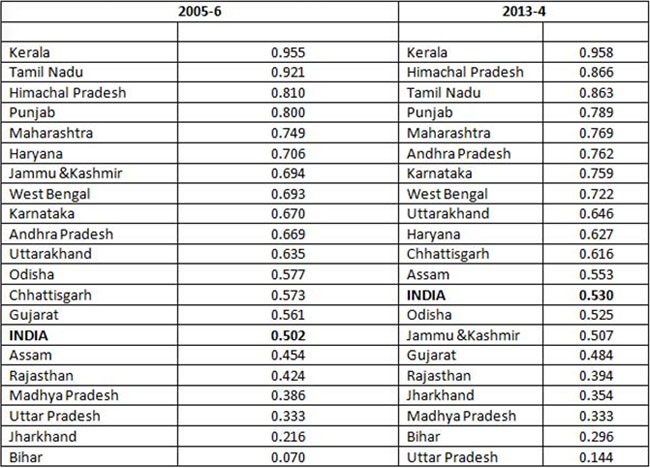 Notes: (i) In Table 1a, the indicators are normalised using the standard HDI method, and given equal weight. (ii) In Table 1b, in each year, states are ranked in decreasing order of Child Development Index.
Sources: National Family Health Survey 2005-06 (NFHS-3), International Institute for Population Sciences (IIPS), Mumbai (2007); Rapid Survey On Children (RSOC) factsheets downloaded from the website of the Ministry of Women and Child Development; Census data 2001 and 2011, for age-specific female literacy rates.

Note that the absolute value of the index is not strictly comparable across years - what can be compared is the ranking of states in 2005-06 and 2013-14. As it happens, the ranking is quite similar in both years and its basic features are familiar. At the top of the list come Kerala, Himachal Pradesh and Tamil Nadu - states that might be called ‘supermodels’ if Gujarat were a model, which it is not. Indeed, Gujarat ranked 14th in the list of 20 major states in 2005-06, and slipped to 15th in 2013-14, with a child development index well below the all-India average.

Predictably enough, the other lagging states belong to the region formerly known by the unflattering acronym of BIMARU - undivided Bihar, Madhya Pradesh, Rajasthan and Uttar Pradesh. However, some important contrasts have emerged within this region. Chhattisgarh, for instance, has detached itself from the rest as far as child development is concerned. Indeed, the child development index for Chhattisgarh is above the all-India average, and of course above Gujarat. Uttarakhand is doing even better. Uttar Pradesh, on the other hand, has replaced Bihar at the rock bottom.

Bihar is still close to the bottom, but in absolute terms, it has progressed a great deal (from an abysmally low base) between 2005-06 and 2013-14. For instance, the proportion of births preceded by an ante-natal checkup in Bihar shot up from 34% in 2005-6 to 85% in 2013-14 - the largest improvement among all major states by a long margin. Similarly, the proportion of children fully immunised jumped from 33% to 60%. For a state that was thought incapable of running basic health services until very recently, this is a real breakthrough.

We explored variants of this index using, for example, stunting instead of low weight as the nutrition indicator, or looking at breastfeeding instead of antenatal care. While some of these variants lead to a somewhat different ranking, the basic patterns are fairly robust: Kerala, Tamil Nadu and Himachal Pradesh are at the top, the former BIMARU states (minus Chhattisgarh and Uttarakhand) at the bottom, and Gujarat near the all-India average.

So what do Kerala, Tamil Nadu and Himachal Pradesh have in common? One part of the answer is that in each case, rapid progress followed a major expansion of elementary education. The timing differed, but mass schooling was the prime mover without exception. Second, the constructive role of the State also extended later on, to the provision of a wide range of essential services and facilities - from healthcare and clean water to social security and basic infrastructure. Third, active social policies enabled disadvantaged groups to have a voice in the democratic process, and that, in turn, led to broad-based support for social development across political parties. Fourth, none of this prevented any of these states from doing well in terms of economic growth - on the contrary. Finally, despite regular warnings that this approach is not ‘sustainable’, Kerala, Tamil Nadu and Himachal Pradesh keep expanding the reach and quality of public services. Tamil Nadu, for instance, has recently introduced pioneering schemes of maternity entitlements, community kitchens, and even nursing rooms at bus stands.

If Bihar can catch up, why not every state?

Can other states take a leaf from these successful experiences? Kerala used to be thought of as some sort of anomaly among Indian states, but now Tamil Nadu and Himachal Pradesh are in the same league. And other states, including some that looked like basket cases not so long ago, are catching up too. Here is some food for thought: in terms of the four indicators considered here, Bihar today is more or less on par with Tamil Nadu in the early 1990s (see Figure 1 below). This can be read to mean that Bihar is more than 20 years behind Tamil Nadu in this field. But if the gap between Bihar and Tamil Nadu continues to narrow, as it did in the last 10 years, this also suggests that Bihar may take less than 20 years to look like Tamil Nadu today as far as child development is concerned. That is certainly a cheerful thought. And if Bihar can catch up, why not every state? 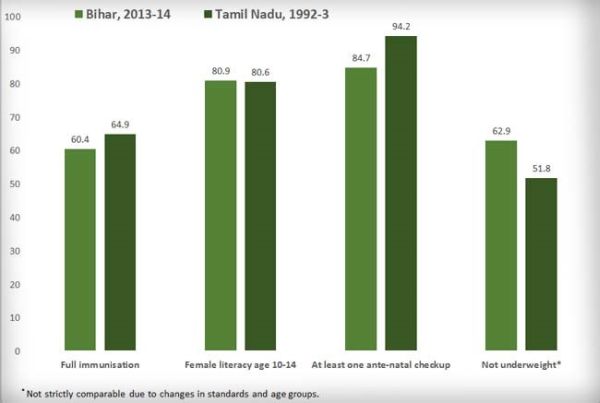 A version of this article has appeared on NDTV: http://www.ndtv.com/opinion/child-development-kerala-tops-gujarat-flops-bihar-hops-1244716