The Government of India has set a rather ambitious goal of eliminating open defecation by 2019. For urban areas, this implies providing toilets to about 22 million households. This column contends that it is possible to achieve this goal if the limited public funds are leveraged to facilitate innovative financing mechanisms, through a demand-led scheme for toilets.

There is an increasing recognition of the importance of sanitation by the new government. The famous “pehle shauchalay, fir devalaya” (toilets first, temples later) quote from the Prime Minister has now been captured in the new Swachh Bharat Mission for Urban Areas (SBMUA)1. The key goal of the mission is to eliminate open defecation over the next five years (Press Information Bureau, Government of India 2014). We recognise that ‘swachh bharat’ in the urban context is not just about toilets; it encompasses the full service chain of sanitation including collection/ storage, transport, treatment and disposal/ reuse of human waste, waste water and solid waste. However, in this column, we focus our discussions on toilet provision. We argue that there is a latent demand for ‘own’ toilets2in urban areas and this demand can be unlocked by supplementing public resources with innovative financing.

For urban India, making cities open defecation-free by 2019 implies reaching out to a projected 22 million households that will not have toilets in their homes. This could potentially require an investment of over Rs. 65,000 crore (US$ 11 bn approx.) – an average of about Rs. 30,000 (US$ 500 approx.) per toilet (Mehta and Mehta 2014b). Our surveys in Gujarat and Maharashtra suggest that principal reasons why households do not have toilets are lack of space and inability to meet the cost of a new toilet (Mehta and Mehta 2014). It must be noted that nearly two-thirds (10 million) of these households do not reside in slums (based on data from the Census of India 2011). Toilets for these households can be financed through a demand-led programme where a small incentive grant is provided by the government, leaving all decisions about toilet design, construction and financing to the household3. Given that SBMUA has an incentive subsidy of about Rs. 5,000 per toilet (about 20% of toilet cost) in urban areas, this can be leveraged to raise additional market-based resources by facilitating innovative finance.

We discuss below a number of options for innovative finance that can be facilitated with smarter use of public funds.

Microfinance for sanitation: The microfinance industry has grown significantly in India with an estimated total portfolio of nearly Rs. 40,000 crore (US$ 6.5 bn approx.) (MFIN 2014). Over the past few years, some micro-finance institutions (MFIs) with reasonably sized portfolios have focused on sanitation. For example, Guardian, the first water-and-sanitation-only MFI in India works in four districts of Tamil Nadu and has an outstanding portfolio of over Rs. 11 crore (US$ 1.9 mn approx.). Another MFI, Grameen Koota with a presence in Karnataka, Maharashtra and Tamil Nadu, crossed a disbursement of Rs. 100 crore (US$ 16.7 mn approx.) for water and sanitation loans in 2014.

Despite this, MFIs have inadequate access to a credit line for lending to households or self-help groups (SHG) at reasonable rates. The current policies require MFIs to have at least 70% of their assets for income-generating loans, and sanitation loans do not fall under this category. Sanitation lending is not classified as priority sector lending for banks4. Increased access to credit for sanitation through the MFI route is possible if a sustainable and predictable line of credit for such MFIs is created.

Housing Finance Institutions (HFIs): In recent years, a number of HFIs have developed special products that target lower income groups. Given the widespread reach of HFIs, with over 180 listed with the National Housing Bank (NHB) for refinance, there could be considerable scope for introducing sanitation loans. However, HFIs have daunting mortgage requirements, and special lending terms for small toilet loans will be needed.

Commercial banks: Possibly, the largest source of funding for sanitation can come from commercial banks which can provide loans to households and SHGs. For increasing their reach, sanitation loans should be included explicitly under priority sector lending. The new financial inclusion scheme, Pradhan Mantri Jan Dhan Yojana, that entitles every family to have a bank account, can make it easier to reach the right groups for sanitation loans.

Corporate social responsibility (CSR): The new Companies Act 2013 in India has made it mandatory for large corporates to devote at least 2% of their profits for CSR (Confederation of Indian Industry (CII) and PricewaterhouseCooper (PWC) 2013).5 Even if a small share of Rs. 12,000 to 15,000 crore (US$ 1.6 bn to 2.8 bn) estimated to be raised annually through CSR is used for urban sanitation, it will provide the much needed funds for financing household sanitation. In addition to the required CSR, our work in cities in Maharashtra and Gujarat suggests that many Small and Medium Enterprises (SMEs) that do not fall under the purview of CSR, as per the Companies Act 2013, look to donate for sanitation. We are developing a ‘city sanitation fund’ that can provide more sustainable engagement avenues for such donors.

Social impact investment: Social impact investors have emerged globally, who accept lower return on capital and look to maximise the impact of their philanthropic engagements. The Global Impact Investing Network (GIIN) estimated that “potential investment by impact investors over the next ten years could be between $400 billion and $1 trillion” (Koh et al. 2012). Although this is still at a nascent stage in India, there are promising signs as a three-year debt fund by HDFC Mutual Fund recently mobilised over Rs. 250 crore (US$ 40 mn approx.) for cancer cure in a joint initiative with the Indian Cancer Society. Also, the first Development Impact Bond (DIB) in India was launched in Rajasthan for girls’ education (Perakis 2014).

Crowdfunding: A relatively new financing mechanism, this mobilises funds from a large number of people through internet platforms for specific initiatives. It is estimated that in 2013, about US$ 5.1 bn will be mobilised through crowdfunding globally (OECD 2014). Global platforms such as Indiegogo, Spacehive, Akvo and Kiva as well as a few in India such as Milaap and BitGiving mobilise loans and donations for local projects and activities such as civic projects, as well as education, water and sanitation. The public nature of these funds can bring in greater transparency and effectiveness, and can be linked effectively to local initiatives for sanitation. 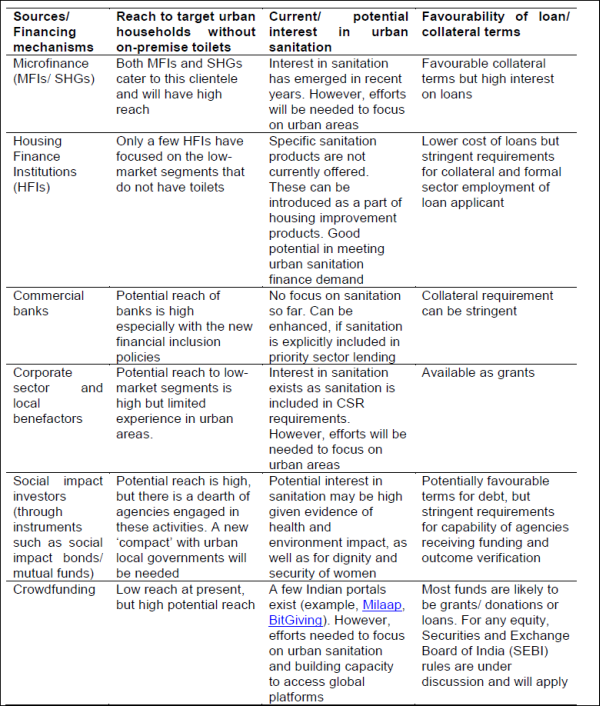 Despite the ambitious nature of SBMUA, government funds available for eliminating open defecation and improving solid waste management services are only about 30% of the envisaged requirement. Thus, there is a clear intention to leverage public funds to facilitate innovative financing mechanisms. This will require enabling policies for mobilising individual and corporate resources. The various mechanisms described in this column, if used well, can also help ensure greater accountability and improved outcomes in terms of delivery and use of toilets.

In implementation of the SBMUA, local governments will need to play a crucial role. Their rather limited capacities necessitate a supporting ecosystem to be developed around the idea of a demand-led programme for sanitation financing7. While funding is only one part of such an ecosystem, it can play a major role in mobilising communities and unlocking the demand for improved sanitation.