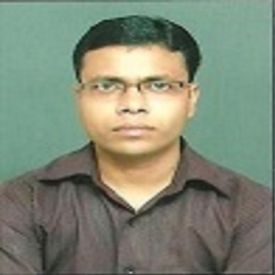 The Pradhan Mantri Ujjwala Yojana is a much-needed and purposeful scheme, given the health hazards faced by women inside households as 79% of rural Indian households still depend on traditional unclean energy sources for cooking. In this post, Rahul Ranjan contends that unless the energy policy in non-agricultural sector encourages the use of alternative energy, replacement of traditional fuels within households is unlikely to happen at large scale.

The Pradhan Mantri Ujjwala Yojana (PMUY), a centrally sponsored scheme was launched by the Ministry of Petroleum & Natural Gas in May 2016 for providing Liquefied Petroleum Gas (LPG) connections to Below Poverty Line (BPL) households. In the revised guidelines of the scheme, it was mentioned that this scheme would be implemented over four years ranging from 2016-17 to 2019-20 across the country. Accordingly, the scheme has completed three years since its launch. Given the status quo of health hazards among women in the households caused by rampant use of traditional cooking fuels in rural India, this is clearly a much-needed and purposeful scheme. In order to reap its benefits, it is imperative to critically assess the scheme and identify required course of modifications, if any, which could be considered during the second phase of its implementation after the completion of this four-year time period.

At this juncture, it is important to look at the patterns of household cooking energy consumption across the country. Table 1 shows households’ primary source of cooking as reported by them. Around 79% of rural households still depend on traditional unclean energy sources for cooking. The dependence upon LPG is increasing over time but its reach is limited to 15% of the rural households. The break-up of the fuel use across consumption quintiles also tells a similar story as more than 50% of the topmost-quintile households still use traditional fuel as primary source of cooking. As we descend to lower quintiles, the number of households using traditional fuel goes up. The gap between the percentages of households using LPG as the primary source for cooking for top and fourth quintile of the 2011-12 round is also as high as 18%. Persistence of unclean energy usage in rural areas may be due to inadequate supply and lack of affordability of modern fuels and easy availability of traditional fuels[1]. It can be concluded that the switch towards LPG needs to happen at a faster pace and for a wider range of people in terms of income.

Since it targets BPL households, the reach of the Ujjwala scheme is limited, while the use of traditional fuel is far more intensive and widespread. The situation is further compounded by the fact that households’ preferences considerably matter for using cooking fuels. NSSO Consumption Expenditure Survey (CES) data of 68th round (2011-12) reveals that more than 60% rural, poor households have free firewood accessibility and more than 70% percent rural, poor households of those who are involved in agriculture activities have free firewood accessibility (Table 1). Around 80% of rural households primarily depend on traditional fuels for cooking, in which, firewood continues to be the major contributor. In this regard, it is important to note that households arrange around 60%of their total firewood consumption from free/home-grown firewood. All these sources are available either free of cost or at a very low price in comparison to the modern fuels for a household. Since there is free availability of firewood in rural areas, the dilemma in front of households is whether to try and replace the traditional fuel with the modern fuel, or try to utilise traditional fuel with more efficiency and in a less hazardous manner.

Source: Authors’ own computations from 68th round NSSO CES.

The Ujjwala scheme meets marginal cooking-fuel requirement of the households and leaves a big door open for use of traditional cooking fuels in spite of increase in LPG connections by households who previously did not have such connections. After the implementation of the scheme, LPG connections have increased rapidly in rural areas (PPAC, 2018), however, it remains to be seen how many households will keep on refilling after getting those LPG connections. The increase in connections should be accompanied with increase in sales of LPG, that is, the LPG consumption. Whether it has really happened and to what extent after the implementation of PMUY needs to be evaluated. Therefore, to evaluate the performance of PMUY, it is significant to empirically examine the growth of LPG connections and its sales with its inter-linkages, and also the number of active and inactive LPG domestic connections. 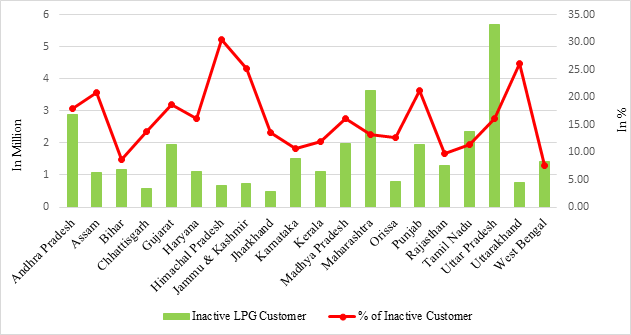 Although PMUY provides financial support of Rs. 1,600 for each cooking gas connection to the eligible households,ultimately they have to arrange at least Rs.1,400 to take a loan from the government for a 14.2 kg LPG connection. In that case, they will not get subsidised LPG cylinder after the sixth refilling until the loan amount is not recovered. This signifies thatthe seventh LPG refilling onward, they have to refill at a market price for next couple of refillings, which will have adverse economic implications for those poor households. As a result of this entire process, releasing LPG connections under PMUY is likely to create non-performing assets (NPAs) for the government which in turn, puts extra burden on it since this could be considered as welfare loss. Besides, to some extent, it might also create room for misuse of LPG because poor households are not able to afford taking loan or do refilling on a regular basis.

There is partial replacement of LPG with traditional fuel and it does not look sustainable. My analysis shows that the energy policy has to be linked with the larger labour-market dynamics in the rural economy. If the poor households are dependent on their marginal land holdings and precarious employment conditions for their earnings, then the replacement of traditional energy with modern energy is going to be limited. Household energy replacements cannot happen in a vacuum. Unless the energy policy in non-agricultural sector encourages the use of alternative energy and creates market opportunities for traditional fuels, their replacement within households is not likely to happen on a big scale.