Section 12(1)(c) of the Right to Education Act, 2009, mandates that non-minority private unaided schools should reserve at least 25% of seats in entry-level grades for children from economically weaker and disadvantaged backgrounds. This column analyses the current status of implementation of this provision, and suggests ways to overcome hindrances in effective implementation and make the education system more inclusive.

The increasing role of the private sector in elementary education in India is now well recognised. As per the 71st round of the National Sample Survey (NSS), over 27% kids at the elementary level (grades 1 to 8) were in private unaided schools in 2014. While the debate on the efficacy of private versus public schools continues (Muralidharan and Sundararaman 2015, Singh 2015), there is little to dispute the fact that this trend threatens to exacerbate the pre-existing segregation in schooling (Little 2010). Section 12(1)(c) of the Right of Children to Free and Compulsory Education Act of 2009 (RTE), is often touted as the State’s response to this increasing segregation. It mandates that unaided non-minority1 private schools reserve at least 25% of seats in their entry-level grades for students from Economically Weaker Sections (EWS) and Disadvantaged Groups (DG). The schools are to be reimbursed by the state governments at the rate of per child expenditure incurred in government schools or the school fees, whichever is lower. If implemented successfully, the mandate could touch the lives of nearly 20 million2 children from EWS and disadvantaged categories and begin to contest an increasingly segregated educational system. Based on DISE (District Information System for Education) data, rules and notifications issued by various states, and field visits in Ahmedabad (Gujarat), Pune (Maharashtra) and Jaipur (Rajasthan) this column analyses the status of implementation of this provision3.

What is the status of implementation?

Despite the significance of Section (12)(1)(c), its implementation has been patchy. Of the approximately 21.1 million seats available nationally (25% of the seats available at the entry level in private unaided schools), DISE suggests that in 2013-14, roughly 610,000 seats were filled under the mandate, resulting in a ‘seat fill’ rate of 29%. This represents an improvement from 21.5% in 2012-13. However, according to Sarva Shiksha Abhiyan4 (SSA), this figure is 23.56% for 2013-14, with the numbers for some states like Gujarat particularly different than reported by DISE. The national average masks great variation between individual state performances. Rajasthan and Madhya Pradesh cumulatively account for half the number of children admitted under the provision, while Uttar Pradesh and Andhra Pradesh have a seat fill rate of less than 1% (SSA: 0%) and less than 5% (SSA: 0.006%) respectively5.

How can implementation be improved?

Clarity in rules and regulations

Analysis of rules and notifications of each state to admit students under Section(12)(1)(c) reveal a dismal picture (Sarin et al. 2015). Of the 28 states included in our analysis, no state had provided complete information on the processes for implementing Section 12(1)(c). 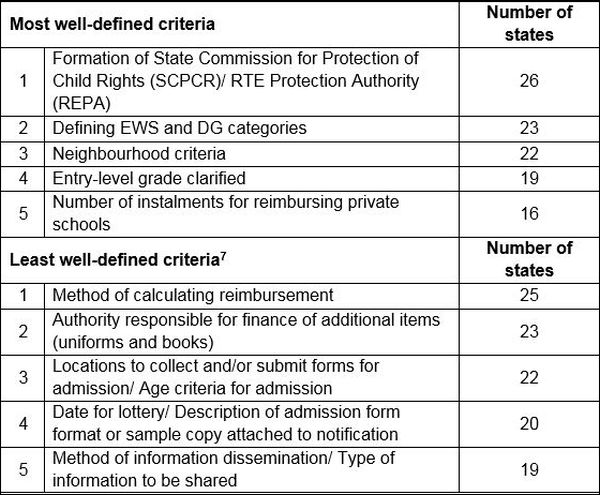 Table 1 shows that states have taken care to define eligibility appropriately, but have not provided clarity on other dimensions such as method of calculating reimbursements, and whether it would also cover expenses toward textbooks, uniforms etc. Thus, the first step in improving implementation would undoubtedly be clearly defining rules and regulations (including the methodology of calculating per child expenditure in government schools), and making them easily accessible.

Our extensive field work, mostly in Ahmedabad (and in Jaipur and Pune, to a lesser extent) suggests that there is very little awareness of the mandate. Even among those who have heard about it, awareness about whom to approach for admissions, and eligibility requirements is limited. Further, parents find it difficult to obtain any information about the school characteristics. Hence, concerted efforts are needed to provide specific information to the relevant households.

In many instances, households don’t possess the required eligibility documents such as caste certificate, income certificate etc. They end up spending substantial amounts of money to procure these documents in limited period of time that is available to them to submit the application. The local administration should ensure that applicants are provided the documents without incurring such costs. Right to Service Acts, e-Seva Kendra can go a long way in facilitating this.

Large number of schools and applicants, possibility of‘cream-skimming9, denying admissions to eligible students on flimsy grounds and limited manpower at the disposal of education departments for monitoring admissions, make decentralised admission procedures sub-optimal vis-à-vis centralised admissions. Under the latter, a school’s role is limited to completing admission formalities of the children directed to the school by the centralised system.10 11 A centralised system also has the advantage of enhancing the choice set of schools available to parents12 . Further, States like Maharashtra and Karnataka have utilised information technology (IT) along with centralised admissions to enable parents to track their application. Such a system will also go a long way in reducing paperwork and keeping track of children once they are admitted to private schools.

Admissions and reimbursements for pre-primary admissions

Many contend that Section 12(1)(c) of RTE is not applicable to pre-primary grades. As a result, admissions through Section 12(1)(c) in many states begin from grade 1 even though the concerned schools might have pre-primary grades. This is potentially disadvantageous for the child admitted since he/she would find it even more difficult to keep up with what is being taught in the class. Some state governments have allowed pre-primary admissions, yet they don’t provide reimbursement for the same. Legal opinion suggests that the government should indeed provide reimbursement for pre-primary grades as well (Sarin et al. 2015).

In the initial years of implementation of Section 12(1)(c), focus has been on enrolment. But it is equally important to find out how the children admitted through section 12(1)(c) are performing in the schools: whether they are continuing in the same school, and how much progress are they making. In other words, we should track these children’s progress and measure their learning. Many states have initiated large-scale assessments of learning of children enrolled in government schools in the past couple of years. It should not be very difficult to include children admitted in unaided schools through section 12(1)(c) in such assessments.

Despite being reaffirmed in the Supreme Court, there has been resistance – both overt and covert - by many private schools in implementing the mandate. While reminding them of their public obligations, the governments must sensitise school administrators and ensure that schools take necessary measures for inclusion. As improvements are made in the implementation process, it is equally important to focus on the environment within the classroom and ensure that efforts are being made to integrate EWS/DG children appropriately.

Complaints about inadequate reimbursement amounts and delays in receipts have been a major concern. Putting the methodology of calculating per child costs in writing and putting the document, along with the data, in public domain would be an important step toward enhancing transparency. Over time, moving toward norm-based reimbursement might be preferable.

Per-student recurring cost is the total recurring cost incurred in government schools divided by the total number of students enrolled in government schools. In a number of states, increase in the numerator and/or decrease in the denominator are pushing these costs up. Additionally, data on actual expenditure is available with a considerable lag. Actual expenditure is contingent on fiscal health of the states and its administrative capacity.

In this situation, ‘norm-based’ reimbursement seems more desirable. To give an example, as per the RTE, there should be one teacher for 30 students in the primary grades. From this, one can easily compute per-student average salary expenditure as recommended by RTE. Note that all India pupil-teacher ratio (PTR) in 2013-14 as per government’s own data is close to 30. Further, unit costs have already been specified for various entitlements such as mid-day meal, uniforms, textbooks etc., either at the state or central level. Adding these up, gives us norm-based reimbursement.

Section 12(1)(c) has provided an important opportunity to bridge social distances (Rao 2013), provide genuine schooling choice and potentially better education to the disadvantaged children, which can have dramatic effects on their life trajectories. Although not discussed here, an imaginative administrator can use this provision to bring about systemic improvements in the entire education system. We hope that incorporating the above suggestions would kick-start the journey of making inclusive education a reality.