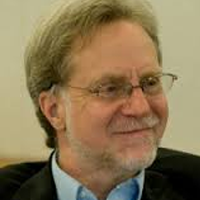 Recent research points towards the role of poor sanitation in ill health and stunting. This column demonstrates the negative impact of open defecation habits and poor nutritional status on the height of children in India. It recommends that the government should prioritise sanitation by building infrastructure and spreading awareness, before focusing on providing publicly funded medical care.

Several events of the last few months have highlighted for me, the contrast in positions in public discourse on health and nutrition policy. One was a conference at the Delhi School of Economics (DSE) in August 2013 on early childhood nutrition and sanitation. Another came from checking up on a research project in Delhi slums. The last was a celebration at DSE of the National Rural Health Mission (NRHM).

Role of poor sanitation in ill health and stunting

On sanitation and nutrition, the conference at DSE pointed to the role of poor sanitation as a cause of ill health and stunting which has taken centre stage lately, mostly as a result of the work and dedication of Dean Spears, a recent Ph.D. from Princeton University who organised the conference along with his colleagues at the Research Institute of Compassionate Economics (RICE). The proceedings showcased several studies pointing to the severity of the problem and the ways in which public policy is likely to help. On the severity of the problem, take a look at this from our joint work (Hammer and Spears 2013): 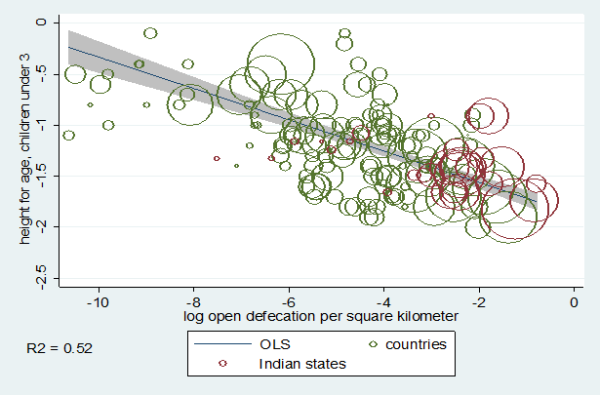 Figure 1 shows the states of India (in red) along with the rest of the world (in green) in terms of open defecation density and child height from the National Family Health Survey (NFHS) 2005 for India, and the equivalent Demographic and Health Surveys (DHS) for the rest of the world. It shows that India falls right on the international regression line – really high on open defecation overall as well as on its prevalence per square kilometre – and very short. This relationship happens to be enough to ‘explain’ the common observation that African children are taller than Indian, despite the higher incomes of the latter. Ongoing work looks at the comparison of children of Indian and African descent in South Africa where Indian children are taller than African, even when accounting for the usual factors that may influence height, such as income. So, open defecation habits may be more than enough to explain the shortness of children in India and this shortness is probably due to their poor nutritional status, not genes (Spears 2013).

More useful than diagnosis, though, is evidence stemming from an evaluation of the Total Sanitation Campaign (TSC) in Maharashtra (Hammer and Spears 2013). Here, an early foray into the TSC was done by the Maharashtra government trying to convince people not to defecate in the open. It showed two different things: one optimistic, one not so much.

Comparing the baseline and endline data1, the treatment group2 shows a very large improvement in the height-for-age indicator for children – about a 1.3 centimetre difference in height for a four-year old, on an average.

The not-so-optimistic part was that the government could only implement the programme in one of three districts it had intended to cover. It implemented the programme in Ahmednagar district but couldn’t or didn’t even start it in Nanded and Nandurbar – poorer and, particularly in the case of Nandurbar, very heavily tribal areas. The large effects reported above were for Ahmednagar. But since it only worked in one of the places it was tried, it raises a broader concern when considering public policy, one that does not get the attention it deserves: how hard, really, is it to get the policy implemented? This need not be related to the issue of money but could be sheer administrative difficulty. It is encouraging indeed that changes in habits can come from policy but no one should think such change is easy.

However, building sanitation infrastructure is technically more straightforward, and relevant when thinking about urban slums. In an ongoing research project, Radhika Jain and I are looking at informal slums with regard to peoples’ sanitary conditions and their health3. We show that variables like “does water from the street ever enter the house?”, that is, things that better urban infrastructure would naturally avoid, are strongly associated with gastrointestinal disease. Having water come in the house doubles overall diarrhoea rates for adults and children (1-5 years age group), and for infants, it causes an extra four bouts of diarrhoea per year. Further, whether your neighbours (those living within 2.5 meters of you) defecate in the open is also associated with your chances of getting sick. This is a real collective action problem for which we need the government.

No one really measures this but it seems to me that as an engineering sort of problem, the construction of sewers, street drains and the like are much ‘easier’ sort of policies to implement than behaviour change (for sanitation) or running a network of primary health centres (where controlling doctors is akin to herding cats4. Since sanitation, safeguarding water supplies and other ‘traditional’ public health measures were the only things that rich countries had at their disposal a hundred years ago (when infant mortality rates were down to just about India’s current levels – with hardly any useful curative health care), it is bizarre and disheartening that India has yet to make barely a dent in the sanitation problem. In rural areas the evidence is coming in that governments can make progress on sanitation. In urban areas, the sewage and drainage conditions are just outrageous.

One last word on prevention (as in sanitation) - and curative care. There is no data that shows a connection between primary curative care and any ultimate health outcome like infant mortality. Such associations are just not in the main sources of information on health – the NFHS’s, the District Level Health Surveys or any other reliable source. With this in mind, it was disturbing to hear recent trumpeting of “success” of the NRHM. As far as I understood claims made by officials from the Ministry of Health and the Planning Commission, the NRHM accomplished the following: (1) it spent more money (2) it hired more people (3) it convinced the states to spend more money (their measure of “state capacity”), and (4) it got more people to use public primary health centres – though no evidence that they are used more as a percentage of total health care usage or that it even kept up with population and income growth. There apparently is some (not yet available) data from the Indian Institute of Population Studies that shows private care as a fraction of all primary health at approximately the same level (75-80%) that it’s been since it was first measured decades ago. Though because there has been no real measurement of health outcomes (nor any relation to inputs) since the NRHM was introduced in 2005, it is hard to conclude much about it. However, the fact that no one was measuring anything that would show an effect is outrageous.

The evidence that does exist – from the sanitation studies and the main sources of health data that do exist (including the forthcoming Medical Advice Quality and Availability in Rural India (MAQARI) studies on the quality of health care nationwide (Das 2011)) reinforces the simplest applications of economic reasoning and common sense to public expenditure: (1) provide public goods like sanitation before private goods like medical care, and (2) do things that are easy, or even just possible such as sanitation, before you try things that are really hard like publicly provided medical care.