ASER – Annual Status of Education Report – has been tracking learning outcomes of children in rural India for the past 10 years. In this note, Rukmini Banerji, Director of the ASER Centre/Pratham, highlights how this model of measurement is different from the traditional models of student assessments seen in India or elsewhere. She also points out key policy changes that have taken place in education in India, at least partly in response to ASER findings.

For the last 10 years, the Annual Status of Education Report (ASER) has been released in mid-January.1 The timing of the release of the report is important; it becomes public before the Union Budget is finalised and before the annual work plans for elementary education at the state and district level for the next school year are completed. Based on the belief that decision making should take evidence into account, ASER collects data between September and November and makes it available in January — all in the same school year. 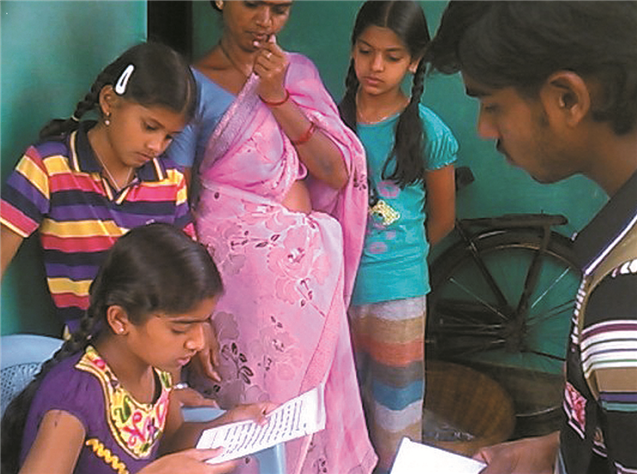 How ASER is different

Where is it done?

Many key elements of the ASER survey are very different from the traditional models of assessment of student learning levels seen in India or elsewhere. Western countries assess student learning through tests administered in school. But in their case, all children are in school, all schools are registered with the government, and their details are available on official lists. But our reality is different. We have growing numbers of private schools, many of which are not on official lists. While very high numbers of children are enrolled in school, not all are present in school every day. School attendance rates vary vastly across states.2 Although the numbers of out-of-school children are now small, they too need to be accounted for. In short, if we are seriously interested in finding out about all children, then there is no option but to go to the child’s home.

Most assessments of student achievement in developed countries are pen-and-paper tests. This makes sense for contexts where most children by Class 4 are able to read. Only when children can read, can they tackle written questions, understand them and write answers. For the last 10 years, the ASER reports indicate that even by Class 5 only about half of all children are able to read a simple text. Even in Class 8, there are close to 25% children who are still struggling to read. Given this reality, does it make sense to administer only written tests in elementary schools in India?

Unless we can establish that a child can read, there is no point in giving the child a pen-paper test. Reading must be assessed individually, one-on-one. Yet again, by emulating what other countries do, the educational establishment in India may have missed the crisis in reading because pen-paper tests make this problem ‘invisible’. ASER has contributed significantly in bringing the issue of reading to the centre of the national discussions in education. Those who follow ASER closely and with an open mind know that over the years, ASER has focused not only on reading but also assessed comprehension, problem solving and tasks related to everyday computations. Many of these tasks have been done individually, one-on-one, with each of the half a million or more sampled children each year. As people who want to help our children progress, it is important that we develop appropriate and implementable mechanisms for understanding our children’s learning in the context of our own realities.

Policies and laws in India give high priority to community participation. ASER is a platform on which over 500 district-level institutions come together each year. If you look at the ASER report, even cursorily, you will see a growing list of District Institute of Educational and Training (DIET) (these are district-level government teacher training institutes) as the main participants in the initiative. In ASER 2014, 243 DIETs (about half of all DIETs in the country) participated in undertaking the survey. Ironically, these are the very institutions that also carry out the government’s periodic national achievement surveys.3 Time and again, principals of DIETs have acknowledged that the visits to children’s homes and to the village by young trainee teachers, as part of the ASER survey, have proved to be beneficial in their capacity building. More and more institutions of higher learning, from central universities to district colleges, are reaching out to ASER to participate.

How has the government responded?

Over the past 10 years, we see significant shifts in policy and practice. For example, the planning and budget allocation process for Sarva Shiksha Abhiyan (SSA)4 introduced a line item more than five years ago for learning enhancement in primary grades. Over and above the usual expenditure on teacher training, the district or state could spend additional funds on programmes to improve children’s basic learning. In response to ASER findings, the centre set aside funds for a “reading cell” in the NCERT (National Council of Educational Research and Training) as early as 2007 - although that initiative did not go far5. The 12th Five Year Plan put a great deal of focus on measurement of children’s learning and on achieving basic learning outcomes in primary school. State governments are becoming more actively engaged in children’s learning. Apart from the ongoing national achievement surveys conducted by the central government, every state government today conducts state-level student assessments6. Several major states have begun to assess reading as well. For example, there are initiatives by state governments - either in the form of assessment exercises or as the first step in learning improvement programmes - to get estimates of children’s ability to read. Such efforts include “Gunotsav” in Gujarat (a broader effort to monitor school quality), “Sambalan” in Rajasthan (which feeds into a reading programme), and state-level assessments in Bihar. More importantly, several states are undertaking initiatives to improve basic reading and arithmetic levels of children in primary grades (“Mission Gunwatta” in Bihar, efforts in Madhya Pradesh, Maharashtra and West Bengal). These moves are positive and promising.

Taken as a whole, ASER presents a different paradigm of engagement and participation, assessment and accountability in education that has not been seen in India before (in fact, in no other social sector in India is there an annual, nationwide, independent effort to track outcomes). Standardised test results do give information to policymakers and planners7, but teachers or parents cannot figure out what the results mean and how to use the evidence to actually improving learning levels of children. There are experts who want to keep knowledge exclusive. And then there are efforts like ASER whose purpose is to open up the methods and measures for generating evidence for the masses and demystifying ‘learning’ so that many more people can engage and work to improve it.

We have achieved close to universal enrolment. We now need to go beyond schooling to learning, and take on the challenge of helping every child learn. As Carol Bellamy, former global executive director of UNICEF said three years ago, “Education is far too important to be left only to educationists”.

A version of this article has appeared in Hindustan Times.