The impact of community-based depression treatment in India 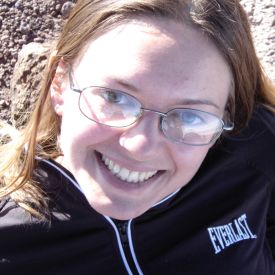 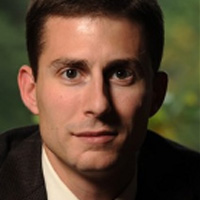 Although the prevalence of depression may have adverse economic impacts, especially in developing countries, treatment options in India are limited by a shortage of providers. This article looks at the impact of providing community-based depression treatment to low-income adults, and finds that it improves mental health and schooling outcomes for older children, and reduces risk tolerance. Additionally, pairing pharmacotherapy with livelihoods assistance provides additional benefits at a low additional cost.

Depression is a pervasive and costly illness with a lifetime prevalence of 15-20% (Kessler and Bromet 2013). It is the fourth largest contributor to the global burden of disease, and the third largest source of years lost to disability (James et al. 2018). Depression is more prevalent among the poor (Ridley et al. 2020) and may contribute to poverty and poverty traps.

For India and other developing countries, it is particularly important to understand the economic impact of depression, and to identify effective and scalable treatments. Although the Mental Health Care Act of 2017 creates a legally binding right to mental health care in India (Duffy and Kelly 2019), only 15% of people with depression in India receive care, since  treatment options are limited by a shortage of providers (Saxena et al. 2007, Gautham et al. 2020).

Psychotherapy and pharmacotherapy are the leading approaches to depression treatment. Psychotherapy typically involves regular extended interactions with a trained counselor or psychologist. Under pharmacotherapy, on the other hand, a psychiatrist treats the patient with antidepressants such as selective serotonin reuptake inhibitors (SSRIs). These drugs, which are manufactured generically in India, have been widely used for decades and have relatively mild side effects (Ferguson 2001, Cascade et al. 2009). Since it requires fewer personnel than psychotherapy, pharmacotherapy may be a valuable tool to treat depression in low- and middle-income countries (LMICs), where mental health specialists are scarce.

In a recent study (Angelucci and Bennett 2022), we evaluated the impacts of community-based pharmacotherapy in Karnataka.

We recruited 1,000 low-income adults (86% of whom were female) with mild or moderate depression symptoms in three peri-urban taluks near Bangalore. We provided pharmacotherapy and livelihoods assistance – such as support to find a new job or develop an income-generating activity – by cross-randomising each intervention, so that participants were offered either pharmacotherapy, livelihoods assistance, or both. The pharmacotherapy (PC) intervention provided eight months of personalised pharmacotherapy with the diagnosis and oversight of a psychiatrist from a local research hospital. In the initial visit, psychiatrists diagnosed patients, explained the significance of mental illness, and proposed an individualised course of treatment. Patients returned for monthly follow-up visits. The livelihoods assistance (LA) intervention involved two group meetings that discussed ways to earn income and deal with on-the-job challenges. Staff then helped participants pursue income-generating activities through job placements, small loans, or training, according to participants' individual circumstances. The PC/LA arm received both interventions, and a control arm did not receive either intervention.

Of the participants, 44% attended at least one psychiatric visit, and 68% attended at least one LA group or individual meeting. This level of take-up suggests that it is possible to surmount barriers to mental health treatment such as a lack of awareness and high stigma. We assessed impacts on depression and socioeconomic outcomes over 26 months, including the period while the PC intervention was ongoing and for over a year after PC had concluded. This duration of follow-up, which is unusual in mental health trials, enables us to judge both the short-term and long-term impacts of pharmacotherapy.

Effects of pharmacotherapy on mental health

Figure 1. Distribution of depression severity by intervention arm, during (left panel) and after (right panel) the PC intervention

Note: A density plot is a visual representation of how the values of one variable, the PHQ-9 in this case, are distributed in our sample.

Effects of pharmacotherapy on work time or earnings

We did not find that PC increased work time or earnings. In fact, PC temporarily reduced work time by 5.4 hours per week and reduced earnings by Rs. 65 per week, a 10% decrease in both outcomes. The combined PC/LA intervention did not have these effects. Most of our study participants were women, and the lack of an improvement in these outcomes aligns with similar studies of mostly female samples in South Asia (Baranov et al. 2020, Bhat et al. 2022).

Effects of pharmacotherapy on human capital investment in children

We aggregated school enrollment, attendance, homework time, and (the lack of) labour force participation into a ‘child human capital investment’ index, and found that it was substantially impacted by PC, especially for older children, as Figure 2 illustrates. For children who were 12 or older (the age of transition to secondary school), PC increased human capital investment by around 0.4 standard deviations. These results were driven by large increases in enrollment and declines in labour force participation. We did not find effects for children aged 5-11, likely because most children of this age were already enrolled in school and did not work for pay. 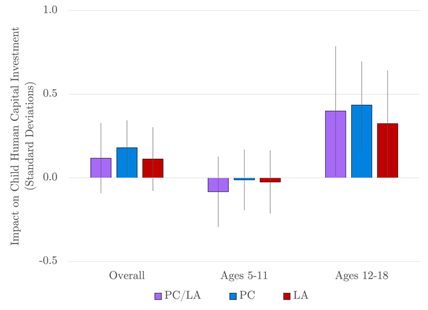 These effect sizes are comparable to the impacts of various educational interventions on enrollment, including conditional and unconditional cash transfers. This result suggests that the well-known correlation between parental depression and child development is at least partially causal. Therefore, adult mental health may be an important demand-side constraint on child human capital accumulation.

Effects of pharmacotherapy on risk tolerance and negative shocks

The interventions also made people less risk tolerant, although the timing and significance of the effects varied across arms. PC reduced risk tolerance by around 0.2 standard deviations after the conclusion of the intervention. We also measured whether households had recently experienced several negative shocks. If people are less tolerant of risk, they likely invest more in preventing negative shocks. Consistent with this hypothesis, we also found that PC reduced the incidence of negative shocks such as death, asset losses, or fire, by around 0.1 standard deviations.

The effect of PC on risk tolerance suggests that mental health may influence economic preferences. Anhedonia and pessimism are two primary depression symptoms that may lead people with depression to perceive less benefit from actions that improve their wellbeing. By alleviating these symptoms, pharmacotherapy could encourage investment to prevent negative shocks, as well as investment in children.

As described above, pairing PC with LA increased the size and duration of the positive impact on mental health. As an additional benefit, pairing PC with LA safeguarded against some transitory negative effects of PC: in the short run, PC reduced work time, activities of daily living (a health measure), and household consumption. We did not observe any of these effects in the arm that received both PC and LA. As implemented, LA added only 5% (Rs. 749) per participant to the intervention costs.

Future research should investigate the complementarity between PC and LA, and whether other inexpensive light-touch interventions could enhance the benefit of mental health care in a similar way. Since LA did not directly increase work time or earnings, features other than job-related benefits of LA may have impacted mental health. The group and individual social interactions that occurred under LA may have enabled participants to receive emotional support from like-minded peers. PC/LA participants also had better medication adherence, suggesting that LA could have improved their ability to plan or follow through. LA might have also helped participants overcome the stigma of receiving mental health care by supplying a reason for accepting mental health care.

There is an urgent need to identify effective and scalable ways to provide mental health care in India. Our findings suggest two pathways through which depression may contribute to poverty across generations: adult depression may reduce investment in child education; and make people more risk tolerant, exposing them to additional shocks that make it more difficult to escape poverty.

However, our trial suggests that community-based pharmacotherapy is feasible using local resources and may be a cost-effective way to treat depression in the community.  Pairing pharmacotherapy with livelihoods assistance or other light-touch programmes may amplify the benefit of mental health treatment.