The number of reported cases of chikungunya – a mosquito-borne viral disease – has been increasing in India in recent years, especially during 2016-2017. In this article, Kaushik Bharati discusses why this is so and what can be done about it.

Chikungunya (CHIK) is a mosquito-borne viral disease of great public health concern in India. Chikungunya derives its name from kungunyala, the Swahili word that describes the contorted and stooping posture of those inflicted with the disease. Chikungunya virus (CHIKV) causes an acute febrile illness, characterised by fever, rashes, and joint pain. Based on scientific studies (Robinson 1995, Lumsden 1995), CHIKV is believed to have originated in Africa about 200-300 years ago. Chikungunya was first detected in 1952-1953 in the Makonde plateau in Tanganyika, now Tanzania.

Chikungunya affects all age groups but severe manifestations are more often seen in children. Symptoms generally start 4-7 days after the mosquito bite. The acute phase is characterised by joint and muscle pain, high fever, extreme weakness, headache, vomiting, and rashes. In the chronic phase, various neurological syndromes and non-neurological manifestations can occur. Importantly, incapacitating joint pain can persist for months and even up to two years. Major cause for concern are the deaths due to CHIKV infections in recent years.

In India, the first outbreak of CHIK was reported in Kolkata in 1963. This was followed by epidemics in Chennai, Puducherry, and Vellore in 1964; Vishakhapatnam, Rajahmundry, Kakinada, and Nagpur in 1965; and Barsi in 1973 (Yergolkar et al. 2006). CHIKV then seemed to have disappeared from the country. The virus re-emerged in 2005 after a gap of 32 years and caused an explosive outbreak affecting 13 states (Lum 2013). The states first affected were Andhra Pradesh, Karnataka, Maharashtra, Madhya Pradesh, Tamil Nadu, Gujarat, and Kerala. All ages and both sexes were affected. The virus isolates belonged to the African genotype, different from the viruses circulating in 1963-1973, which belonged to the Asian genotype (Arankalle et al. 2007).

Since 2007, diagnosis and data assimilation for CHIK in India has been facilitated by the National Vector Borne Disease Control Programme (NVBDCP). The programme has 347 sentinel centres in 35 states, and 14 apex referral laboratories. Based on NVBDCP data, the number of CHIK cases reported during 2010-2017 is presented in Figure 1. 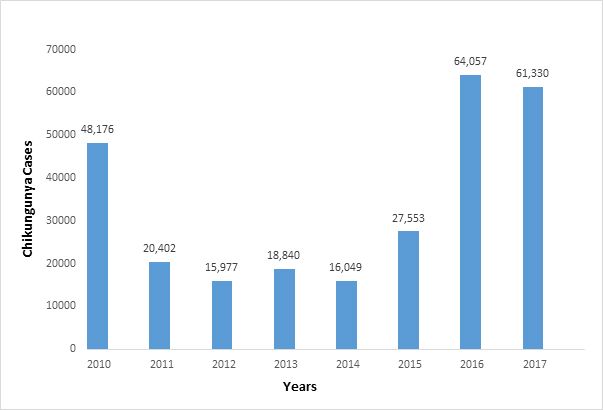 The number of cases reported is increasing in recent years, particularly during 2016-2017. This could possibly be influenced by the increased efficiency of case detection due to the availability of CHIKV-specific IgM detection kits developed by the National Institute of Virology and made available through NVBDCP. 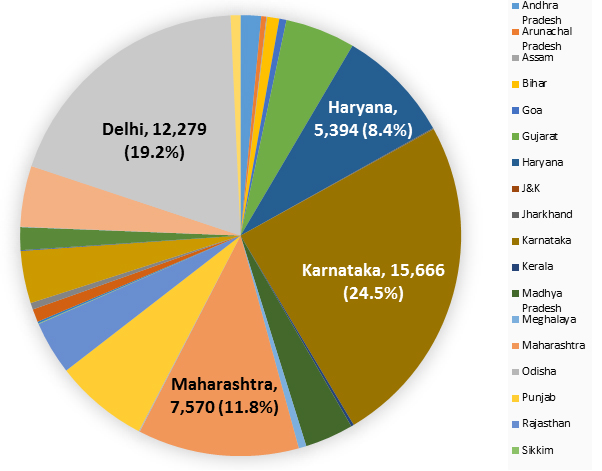 There could be several reasons for the variation in the number of cases across the country. The geography of the area, climatic conditions, vector (mosquito) density, human population density, and rapid unplanned urbanisation are some factors that could account for this variation. Moreover, the burgeoning human population has led to encroachment into sub-urban and rural habitats that had previously been exclusively infested by mosquitoes. Disturbance of this ecological balance could plausibly have led to increased number of CHIK cases. 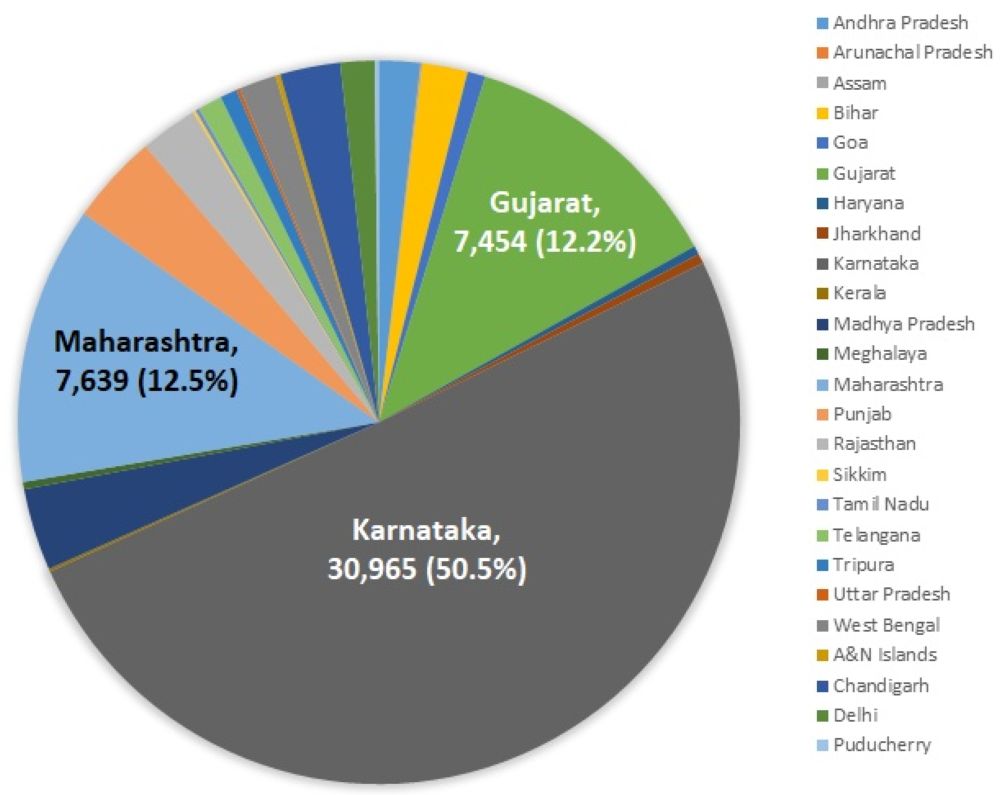 As shown in Figure 3, the highest number of cases are seen in Karnataka, accounting for 50.5% of cases. This is followed by Maharashtra (12.5%), and Gujarat (12.2%). What immediately catches attention is the huge increase in the number of cases in Karnataka. This has essentially doubled, from 24.5% in 2016 to a staggering 50.5% in 2017. In order to figure out the reason for this extreme change, keeping all other factors (mentioned above) constant, I look at rainfall data for Karnataka in 2016 and 2017 provided by the Karnataka State Natural Disaster Monitoring Centre. As of 31 October 2017, the precipitation level in 2017 (over 920 mm) was significantly higher than in 2016 (720 mm). This drastic variation in the rainfall pattern may account for the higher number of CHIK cases in 2017 as higher rainfall translates into increased breeding of mosquitos.

What explains the resurgence of chikungunya in India?

Some of the major reasons for the resurgence of CHIK in India include the following:

Some of the specific strategies that can be adopted for tackling the problem may include the following:

Proper health facilities: Government hospitals, including those at the district level, should have the capacity and expertise to tackle CHIKV infections, particularly in outbreak situations, where there is a surge of patients flooding these healthcare facilities. In case of absence of proper facilities at the lower rungs of the health system – which is often the case – a prompt referral system should be in place so that patients are not delayed in receiving treatment at the higher levels. The secondary and tertiary healthcare facilities should have proper infrastructure, trained manpower, and rapid diagnostic kits for early detection of CHIK cases, so that treatment can be given without delay.

Robust public health system: There is an urgent need to give more attention to public health services for prevention of the disease. More public awareness needs to be generated about the disease, how it spreads, and how it can be prevented. Local bodies such as Gram Panchayats in rural areas and municipal corporations in urban areas should conduct regular checks for mosquito breeding sites at the household level, as well as undertake fogging activities at the community level. The government bodies can impose fines in case of non-compliance – which is now happening. Although there is evidence that the authorities are active in the metros; whether this is true for tier-II cities and more so for the rural areas, is a matter of conjecture.

Adequate and timely financing: Adequate funds should be released in a timely manner so that public health activities can be prioritised and properly planned. This will ensure recruitment and training of staff, prior to the actual occurrence of outbreaks. Sufficient funding will also ensure the procurement of necessary supplies like insecticides, fogging machines, and so on, so that these could be made available to workers on the ground.

Creation of evidence-based policies: As for most diseases in India, the reporting system for CHIK cases is sub-optimal. Disease reporting systems should be strengthened so that the disease burden data can be established and this information properly utilised to chart a course of action. Importantly, all health policies should be formulated based on the evidence generated from ground-level studies and not on assumptions or speculation.

Utilisation of novel strategies for vector control: Some novel methods have emerged from recent research activities, which may be used in conjunction with existing vector control strategies. These are briefly highlighted below:

Mosquitoes have co-existed with us since time immemorial and it will likely remain so for centuries to come. It is next to impossible to entirely eradicate mosquitoes from our ecosystem. Hence, CHIKV is not likely to be eradicated entirely. Moreover, since the virus has an animal reservoir – as is true for most arboviruses – it will still persist in nature even if humans are protected by future vaccination efforts, as and when they are developed. However, the disease burden can be appreciably reduced through well-planned and well-executed public health strategies.