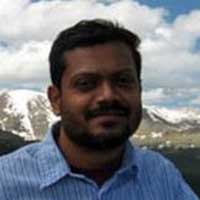 It is puzzling to note that while real household expenditures and incomes in rural India have been on the rise, average calorie intake has declined. Analysing data from the National Sample Survey, this column finds that this is an outcome of a food-budget squeeze; rapidly rising expenses on non-food essentials such as cooking fuel are absorbing all the increases in real total expenditures

One of the most enduring puzzles related to economic development in India over the past few decades is what Chandrasekhar and Ghosh (2003) have called the “calorie consumption puzzle”. Average calorie intake has declined over time even as real expenditures and incomes have increased. According to National Sample Survey (NSS) data, between 1983 and 2009-10, average inflation-adjusted monthly expenditure of households increased by 28% but calorie intake declined by 16% in rural India (Figure 1). 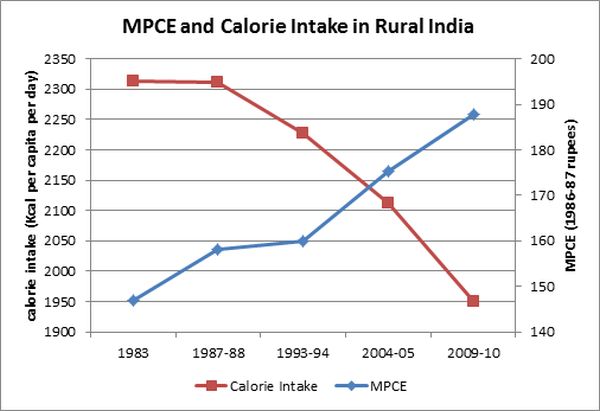 Note: Real MPCE is obtained by deflating nominal MPCE by the consumer price index for agricultural labourers (with 1986-87 as the base year). Source: Report 508 and 538 of the National Sample Survey Organisation (NSSO), India and authors’ calculation from unit-level data

If we look across Indian states at any point in time, we see a robust, positive relationship between per capita real expenditure and average calorie intake. Hence, the pattern that we see over time for rural India, whereby real per capita expenditure and average calorie intake move in opposite directions, clearly presents a puzzle. Many explanations have been offered to explain this phenomenon. These include declining calorie needs due to reduced physical intensity of work and improved epidemiological environment (Deaton and Dreze 2009), increase in the relative price of food (Gaiha et al. 2009), dietary diversification leading to consumption of more expensive calories (Rao 2000), voluntary choice of luxuries such as televisions over food (Banerjee and Duflo 2011), under-reporting of calorie intake due to eating outside home (Smith 2013), and a household food budget squeeze (Mehta and Venkatraman 2005, Sen 2005).

In a recent paper, we conceptualise the ‘food budget squeeze’ as a situation where real expenditures on food do not increase sufficiently – given changes in prices, preferences (example, for food versus non-food, for cereals versus non-cereals), and structural factors (example, loss of access to common property resources, changes in state provision of healthcare, housing, transportation and education) – to ensure a steady (or rising) calorie intake. We test the food-budget squeeze argument using household-level data from four Consumption-Expenditure Survey (CES) rounds of the NSS (1987-88, 1993-94, 2004-05, and 2009-10) (Basu and Basole 2014).

Why should we care about declining calorie intake?

Before we discuss our analysis and results, we would like to offer three reasons as to why we care about declining calorie intake in the first place. First, Deaton and Drèze (2009) show that even though anthropometric measures, such as height-for-age, weight-for-height, and weight-for-age among children, and adult body mass index (BMI) have improved in India, they are still among the worst in the world. More importantly, improvements in these measures are slow relative to what might be expected given recent rates of economic growth.

Second, comparing the average calorie intake in rural in 2009-10 (Figure 1) with the Indian Council for Medical Research (ICMR) norms of 2009 (ICMR 2009), we see that the vast majority of the population consumes less than the required daily intake of calories. This leads us to suggest that a voluntary reduction in calorie intake (as implied by the declining needs explanation) cannot be the whole story, since it entails people voluntarily reducing calorie intake while falling well short of basic nutritional requirements1.

Third, an implication of increasing average real expenditure and declining average calorie intake is the divergence between expenditure-based measures of poverty and calorie-based measures of undernutrition. Even as the head count ratio2 has declined over time, prevalence of undernutrition has increased, a paradoxical phenomenon that has been studied previously (Mehta and Venkatraman 2005, Patnaik 2007, Ray 2007, Smith 2013).

Taken together, the continued poor performance of India in improving child and adult nutrition and the relatively low levels of calorie intake in a significant proportion of the population suggest that purely voluntary explanations such as reduced intake due to reduced needs or diversification of the diet may not suffice. Factors outside the control of households may also be at work. In Basu and Basole (2014), we offer evidence for one such mechanism - a squeeze on the food budget.

Over the past two and a half decades, food expenditures in real terms have not increased sufficiently in rural India while real non-food expenditures have been rising rapidly (Figure 2). The food-budget squeeze hypothesis proposes that the two are causally linked in the sense that increases in the latter have led to stagnation of the former. Although expenditures on food as well as non-food items are a result of household-level decision-making processes, these decisions occur in the larger context of structural changes occurring in the economy such as loss of access to common property resources (example, forests, grazing grounds, rivers and ponds), decline in livelihood options in rural areas, and changes in the supply of social services by the State, all of which can affect private expenditures on healthcare, education, fuel, transportation, and other personal services. In such a context, a food-budget squeeze can arise if rapidly rising expenses on such non-food essentials absorb all the increases in real total expenditures and keep real expenditures on food from rising. 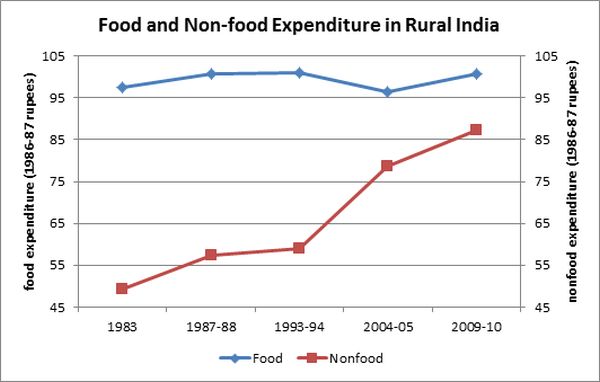 Note: Real expenditure is obtained by deflating nominal expenditure by the consumer price index for agricultural labourers (with 1986-87 as the base year). Source: Report 508 and 538 of the NSSO.

To investigate the squeeze on food budget, we focus on one such non-food essential item: cooking fuel. Our study compares households with different levels of real expenditure on cooking fuel, but that are similar in all other respects, within each expenditure decile3 and geographical region. We also take into account diet diversification, the relative prices (of food versus non-food, and cereals versus non-cereals) that households face, occupation of households, their epidemiological environment, schooling, caste, religion and other demographic factors. A squeeze on the food budget, if present, would show up as lower calorie intake for households that spend more on cooking fuel, other observable characteristics remaining the same.

But spending on food (the source of calories) and spending on cooking fuel are likely to be jointly determined by households while budgeting. Thus, household-level factors we have not accounted for, some of which might be unobservable and associated with each other, might affect both types of spending.

Calorie intake is impacted by a host of observable household level characteristics, including expenditure on fuel, and unobservable factors. One such unobservable factor is the preference for different types of food. For example, if a household becomes health conscious and decides to increase the intake of animal protein, it might substitute cereals for meat. Since meat is a more expensive source of calories, the switch would entail a reduction in calorie consumption once total expenditure is accounted for.

Expenditure on fuel has its own set of determinants, being impacted by the price of fuels, other household level observable factors and unobservable factors. One such unobservable factor might be the willingness to deal with smoke (arising from health concerns). Thus, the household might switch from fuelwood to LPG because the latter reduces the amount of smoke in the cooking area. But the switch entails higher expenditures on fuel.

Thus, in this case, we would observe a negative relationship between calorie intake and expenditure on fuel because unobservable factors affecting both are associated with one another (because both are reflections of the desire of the household for better health outcome). However, we cannot say that a rise in fuel expenditure caused a decline in food expenditure and hence, calorie intake. Hence, we cannot infer the presence of a ‘food-budget squeeze’ simply from this negative relationship.

To deal with this potential problem, we categorise households into two groups: (a) those that use commercial sources of cooking fuel (kerosene, Liquified Petroleum Gas (LPG)), and (b) those that use non-commercial sources of cooking fuel (fuelwood, dung)4. Use of commercial sources of cooking energy as opposed to the use of predominantly non-market sources entails significantly higher expenditures on cooking fuel. Thus, choice of cooking fuel directly impacts real fuel expenditure. Accounting for income and other household characteristics, supply-side factors beyond the control of individual households play an important role in fuel selection. These include distribution networks for and availability of commercial fuels, deforestation, access to common property resources, acquisition of forest land for mining, industrial and infrastructural projects, and changing opportunity costs of women´s time due to increased availability of non-farm employment (Cooke et al. 2008, Heltberg et al. 2000, Joon et al. 2009, Rao and Reddy 2007). The choice of cooking fuel does not have any direct impact on calorie intake other than through its impact on the expenditure on cooking fuel (once household characteristics have been accounted for). This is because household characteristics that are unobserved or omitted from the analysis would be unrelated to such supply-side factors outside the control of households. Thus, looking at fuel choices of households (commercial versus non-commercial) enables us to identify whether a causal relationship exists between real fuel expenditure and calorie intake. Our analysis shows that a 1% increase in real expenditure on fuel between 1987-88 and 2009-10 reduced calorie intake by about 0.18%.

A potential problem with this analysis is that fuelwood collection is itself an energy-intensive activity. Thus, the choice of the fuel may impact calorie intake via calorie needs rather than via fuel expenditure. To address this concern, we exclude households that report ‘freely collected’ fuelwood (which is mostly collected over a large area including forests and is the most energy intensive part of fuelwood collection) as the primary cooking fuel, and re-do the analysis. Our main result still holds - an increase in real expenditure on fuel reduces calorie intake, but the magnitude of the effect declines. For this sub-sample of households, we find that a 1% increase in real expenditure on fuel between 1987-88 and 2009-10 caused 0.07% decline in calorie intake.

In conclusion, we suggest that declining calorie intake should be seen as an outcome of a growth process where rural purchasing power has not increased sufficiently, to allow for more food and non-food consumption. Proximate policy implications call for more effective delivery of food and fuel via the Public Distribution System (PDS). In the longer run, improved investment in agriculture as well as more non-farm employment opportunities are essential to increase rural purchasing power sufficiently.