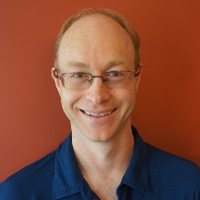 Job growth is a key policy concern across developing countries and there are been an increased interest in the role of active labour market programmes that provide vocational training to job-seekers, wage subsidies to employers, or search and matching assistance. In this article, David Mckenzie critically evaluates recent studies on these programmes, and finds that the effect on employment and wages is limited.

Jobs have long been one of the most important concerns for policymakers in developing countries. Several recent trends have increased interest in the role of active labour market programmes (ALMPs) that aim to directly help particular workers find employment (World Bank, 2012). These include increased unemployment after the Global Crisis, continuing demographic pressures in many countries that lead to 10 to 12 million young people entering the job market annually in Africa (Mohammed 2015), and concerns about automation reducing the possibility for manufacturing job growth.

This increased policy interest in ALMPs has been accompanied by a growing number of randomised experiments that test the impacts of these policies, by comparing employment outcomes for a treatment group that is randomly assigned to receive one of these programmes to a control group of similar individuals who do not. Most of these experiments were conducted in the last few years, with 16 out of 24 studies published in 2015 or later, and only one before 2011. In a recent working paper (McKenzie 2017) I critically evaluate these studies and draw out their implications for developing country policy.

Traditional ALMPs are divided into three main categories. The first set of programmes operate on the labour supply side, aiming to increase the employability of workers through vocational training (see McKenzie and Woodruff 2014 for a separate review of programmes that foster self-employment through business training). A second set of programmes operates to increase the demand for labour, through subsidising the cost of labour to firms with employment subsidies. Finally, search and matching assistance programmes aim to lower frictions that prevent demand meeting supply in the labour market. All three categories have been subject to recent experiments.

One reason people may struggle to find jobs is that they lack the technical skills demanded by employers. Vocational training programmes aim to overcome this constraint by providing training in specific occupational skills, typically over a period of 3 to 6 months. Some programmes involve just classroom training, while others include an internship component to provide on-the-job-training. These programmes can be reasonably expensive for governments to provide, costing between US$500 and US$1,700 in most of the cases studied.

Figure 1 shows only one-third of studies find a significant impact on employment, with the simple unweighted average across the studies equal to a 2.3 percentage point increase in employment. That is, for every 100 people offered vocational training, fewer than three will find a job they would not have otherwise found. The result is a cost of approximately US$17,000-60,000 per additional person employed. The impacts on earnings are also modest, with an average increase of only US$19 a month, and again the majority of studies failing to find a significant impact. 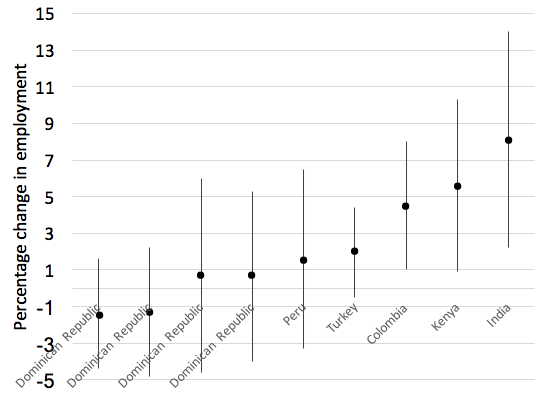 Note: Each line reports the impacts from a separate study. Four estimates are shown for the Dominican Republic because four separate studies evaluated different cohorts of the programme over different time frames.

Note: Each line reports the impacts from a separate study. Four estimates are shown for the Dominican Republic because four separate studies evaluated different cohorts of the programme over different time frames.

A second approach is to give job-seekers a wage subsidy voucher that they can take to employers when hunting for jobs. This subsidy lowers the cost to the employer of hiring the worker for the period of the subsidy (often six months to a year). The hope is then that this short-term employment experience may continue to have an impact once the subsidy has ended. This could occur if the subsidies encourage employers to take a chance on young and untested workers who turn out to be good matches, or if on-the-job learning enables workers to increase productivity.

Experiments in Argentina, South Africa, and Jordan have tested the impact of wage subsidies. In both Argentina and South Africa, employers were required to formally register the worker and comply with labour laws. This made employers very reluctant to use the vouchers (for example, only 30 out of 1,500 workers given the voucher were hired with the subsidy). However, these studies do suggest that the mere fact of having the subsidy encouraged job-seekers to approach more employers, with a significant impact on employment in South Africa. A key caveat is that the attrition rates in both studies exceeded 20%, which could bias the results.

In contrast, the experiment in Jordan of Groh et al. (2016) did not require firms to formally register workers, and resulted in a very large (38 percentage point) increase in employment while the subsidy was in effect. But when the subsidy ended, most of these youths left the firms, and there was no lasting impact on employment.

A final class of studies considers programmes designed to reduce information and search frictions, and to better match workers and firms together. These include public information services, job fairs, certification of hard and soft skills, and transport subsidies. These services tend to be much cheaper than training or wage subsidies, costing US$25 or less per person assisted.

These lower costs certainly lower the bar in terms of treatment impacts needed in order for these programmes to pass cost-benefit tests. However, as seen in Figure 2, out of the 10 different interventions, only one (Jensen 2012) finds a significant impact on employment, increasing employment by 2.4 percentage points over three years, and the average impact across studies is 2.7 percentage points. Moreover, none of the studies finds a significant impact on labour earnings. 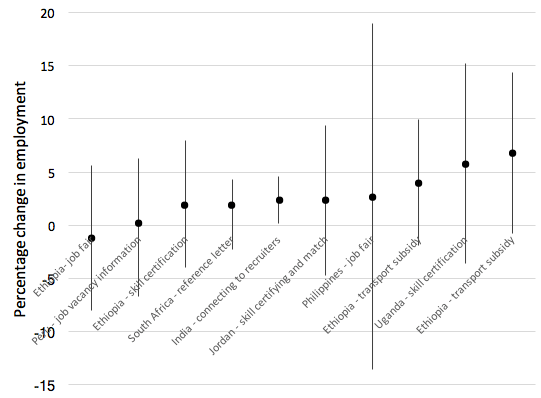 The conclusion is that traditional active labour market programmes have had at most modest impacts on employment in most cases. For every 100 people that such programmes aim to help, the typical impact is that 2 to 3 might gain employment, with this seldom being statistically significant. These impacts are much lower than expected by policymakers and programme participants in many cases, and justifying these programmes on a cost-benefit basis typically requires assuming that impacts persist for much longer than typically measured, and that formal employment is to be especially valued.

Given the continued pressure for governments to be seen to be doing something to help people find jobs, this lack of empirical evidence for the effectiveness of many traditional programmes is unlikely to be enough to cause them to be abandoned unless better alternatives can be found instead. In McKenzie (2017) I discuss several potential approaches: working more on policies to foster labour demand, and helping workers access different labour markets by overcoming barriers to them moving across job sectors and to different locations. Such efforts also need rigorous evaluation to determine their effectiveness, and the paper also draws out lessons for researchers planning future experiments in this field.