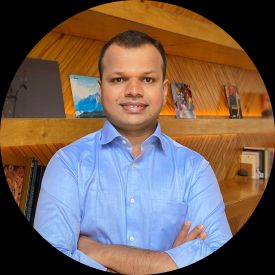 The crisis that emerged in the US subprime mortgage market this month 10 years ago, not only engulfed the country’s financial system but the entire global economy. In this post, Vikas Dimble and Nalini Gulati explore some of the key effects of the crisis on the Indian economy.

At the turn of the century, with real estate booming, US banks began giving home loans to people who could not afford them. Investment banks bought these loans (along with the good ones), bundled them into complex securities, and sold them to investors. Insurance companies sold cover to investors for these mortgage-backed securities. In 2007, adjustable interest rates on these ‘subprime’ loans began rising; defaults started, and a large number of houses went to banks. Property prices crashed, and the most severe financial crisis in living memory hit the global economy in 2008.1

The immediate, direct impact on India’s banking sector was muted given stringent regulation and limited integration with the global financial system. According to the Banking Regulation Act, 1949 (as amended by The Banking Regulation (Amendment) Act, 2017 banks have to maintain – in addition to cash reserve requirements – assets in India amounting to 40% of their total liabilities in India. Banks are not permitted to borrow outside of the country for lending purposes, and the permissible limit of foreign borrowing for capital is linked to their capital adequacy ratio (CAR)2. Due to restrictions on entry, the presence of foreign banks is low (in contrast to emerging economies in Eastern Europe and Latin America). The share of banking assets held by foreign banks with majority ownership was just 5% in 2006, and these banks do not have wide reach in the domestic economy.4 Further, unlike advanced economies such as Japan, there was not much exposure to sophisticated investment products and subprime mortgages that were at the root of the crisis in the US. These factors insulated the banking sector from contagion effects of the crash. For instance, ICICI Bank, India’s largest private sector lender at the time, had some exposure to the US subprime mortgage market, but its strong capitalisation enabled it to tide over the losses.

According to economist Kaushik Basu, along with precautionary norms of the Reserve Bank of India (RBI), the pervasive use of ‘black money’ in the economy created a bulwark against a crisis in the banking sector. The basic argument is as follows. To avoid taxes, a large part of the payment in almost all property purchases in India is made in cash. This makes the declared value of property lower than the actual value. Mortgage loans can only be raised on the declared value, and the proportion is, in any case, much lower than that in advanced economies like and UK. Hence, even when prices fell in 2008-2009, bank loans were well within the value of .

The real economy, on the other hand, was indeed connected the global economy and the impact on the banking sector came largely through this channel. External commercial borrowing of firms, which grew year-on-year (y-) by 56.67% and 50.41% during 2006-2007 and 2007-2008 respectively, remained almost the same between 2008 and 2009. Also, the financial sector collapse in the US spread to its real sector via a credit crunch and resultant lowering of aggregate demand, causing a recession. The slowdown had a significant dampening effect on trade: India’s total trade (excluding oil) experienced an average annual growth rate of 23.53% during 2005-2009; this figure fell to -4.34% between 2008-09 and 2009-10. Lower export demand and a ballooning import bill due to rising commodity prices led to of the current account deficit. The adverse impact on the real economy is likely to have weakened the ability to repay bank loans, as well as exerted pressure on domestic credit.4 5

The sharp increase in FIIs in the years following the crisis largely drove the strong performance of the stock market, which has gone up in value by nearly 90% in the past decade. Immediately after the crisis and before the upturn began, the stock market did crash; however, there is low participation in equity investment among Indian households and hence, the stock market does not have any significant wealth and consumption effects. 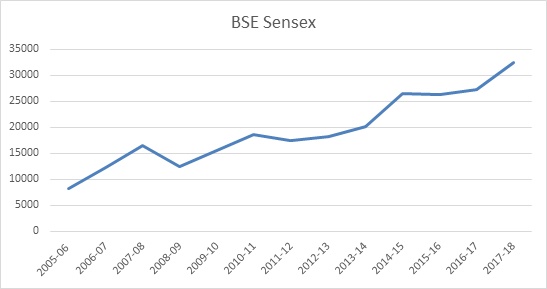 In line with efforts made by governments and central banks all over the world, the Indian government and RBI took active steps to counter the slowdown, significantly relaxing monetary policy (interest rate reduction) and introducing fiscal stimulus to boost domestic demand. While the round of stimulus helped spur economic growth, they led to an increase in fiscal deficit. The Fiscal Responsibility and Budget Management (FRBM) Act, 2003 mandates a fiscal deficit of up to 3%. The pre-crisis level was 2.54%, which increased to 5.99% in 2008-09 and 6.46% in 2009-10. While it has more or less shown a declining trend since then, it is still above the FRBM target. Another negative effect of these macroeconomic policies was the increase in inflation from 6.2 (average consumer price index (CPI)) pre-crisis, to 9.1 in 2008-09 and 13 in 2009-10 (Planning Commission, 2014). 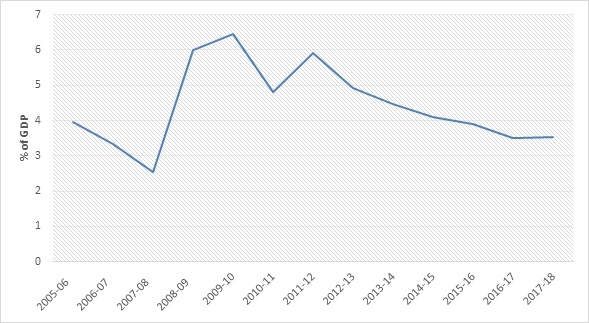 It is widely believed that India’s stringent regulation and prudent policies enabled it to survive the crisis in reasonably good shape. Economist Ila Patnaik has recently contended that the Indian solution has been to treat the lesson from the crisis as going even more slowly on financial sector liberalisation that it had in the past. However, to serve the growing needs of the economy, the approach should be to ‘allow and regulate’ and undertake appropriate reform with much greater speed.

The Indian economy is more connected to the global financial system today than it was a decade ago. The exposure to FIIs has increased; these tend to be volatile, making the economy more vulnerable to any external shocks. With interest rates beginning to rise in advanced countries, India may experience outflows of foreign capital. On a related note, since FIIs have been driving the stock market performance, there is concern that the market’s buoyancy is not backed by the real economy.

Further, in the years leading to the crisis, non-performing assets (NPAs) of banks in India were on the decline, putting banks in a strong position to deal with the adverse effects of the crisis. During 2005-2008, annual gross NPAs amounted to Rs. 500 billion, on average; the figure now is a whopping Rs. 7,903 billion.

Finally, at the time of the crisis, the slowdown in advanced countries led to a fall in export demand in India and other emerging economies. The developed world is now getting back to a steady growth trajectory. However, this may not imply an increase in trade given the present sentiment of protectionism.

The authors are grateful to Dr. Pronab Sen for his guidance and inputs.