The recent turmoil in the currency market and the general slowdown in growth in India are disturbing. However, India has by and large performed better in terms of macro-financial stability as compared to many parts of the world. This column discusses the problems confronting policymakers, and current policy responses and associated costs, and suggests alternative policies.

The United States (US) is yet to completely come out of the financial crisis that began in 2007-2008. Parts of the European Union (EU) are still going through a financial crisis. East Asia faced a major crisis in 1997-1998. What about India? There was a crisis in early 1990s but that was a long time ago and it was rather mild compared with crises elsewhere. The recent slowdown in growth, and turmoil in the currency market in India in September this year are disturbing but they are very far from being labelled a financial crisis. India has somewhat consistently performed much better with regard to macro-financial stability relative to the rest of the world. However, this stability has come at a high cost. In this column, I present a diagnosis of the problems confronting policymakers, discuss the solutions being used at present, and suggest alternative policies.

The fiscal deficit is large2. Looking at just this, a fiscal crisis cannot be ruled out. The current account deficit too is very large by some yardsticks. So, even a currency crisis cannot be ruled out. Banks seem stable in India. However, a quarter of their funds are invested in government bonds. It is interesting to note that the ratings3 of these bonds are low implying that banks that invest in these bonds are at risk. Hence, even a banking crisis is possible. The price of real estate in parts of India is quite high (particularly if we use purchasing power parity for international comparison and adjust for quality) and a substantial fall in prices may occur. This can have serious implications (recall that the Japanese crisis around 1990 and the recent US crisis involved a fall in real estate prices). Finally, consider the stock market, which is usually thought of as a risky place. But it is interesting that at this juncture, stock prices appear ‘stable’ from the view point of systemic risk. This means that there is hardly any bubble or serious undervaluation of stocks on an average. However, given the weaknesses elsewhere in the economy, there can be increased volatility and a fall in prices in this market too.

We conclude that there is systemic risk in India. But then why is there no financial crisis?

The government has imposed regulations such as the Statutory Liquidity Ratio (SLR) requirement. Banks are required to invest at least 23% of their funds in what are basically government bonds. This regulation creates a captive market for government bonds. This implies that the government hardly faces any problem in financing its deficits. So a fiscal crisis gets averted! However, there are no free lunches. There is an adverse effect on the borrowers and depositors of banks - bank credit falls; interest rate rises for borrowers and falls for depositors. Bank credit for industry and trade falls further as banks are required to (a) lend 40% of their net bank credit to the priority sectors, and (b) observe 4% Cash Reserve Ratio (CRR)4. There is also lack of effective competition among (public sector) banks. So there is a shift of funds from deposits to other assets like real estate and gold and even to stocks, which have their own problems.

Figure 1 below shows the relative decline of the banking sector vis-à-vis the stock market. One reason for this is financial repression (excessive controls/ regulations imposed on banks, often with a view to ease the government’s fiscal constraint). 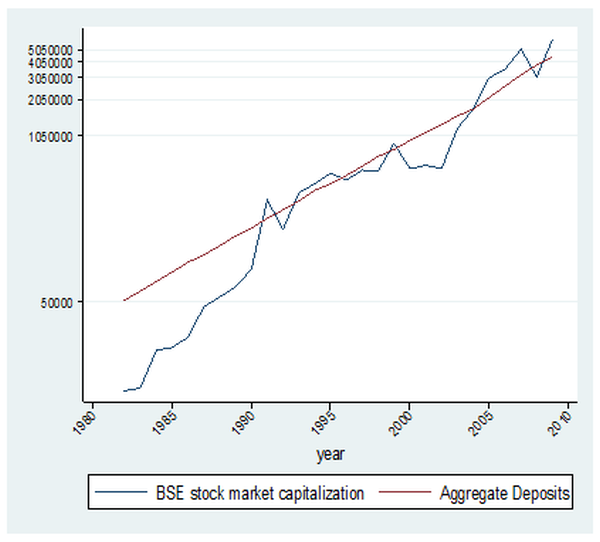 Next, consider home prices. Why do house prices not crash if they are high? The reason is simple. There is some kind of a ‘license-permit-quota Raj’ in the real estate sector in India that keeps supply low and prices high. The popular view is that prices are high and rising due to rising demand. However, rising demand need not lead to a significant rise in real prices in the long run if supply is allowed to keep pace (as has been the experience, by and large, in the US and elsewhere).

Until recently, the Reserve Bank of India (RBI) had been holding large foreign exchange reserves relative to Gross Domestic Product (GDP). While this can avoid a currency crisis, there is a large and persistent opportunity cost as these funds could have earned higher returns elsewhere.

Another mitigating factor is the jumps in inflation rate. There have been un-anticipated jumps in inflation rate in India in 1963-1964, 1973-1974, 1979-1980, around 1990, 1997-1998, and around 2009. This factor reduces the debt of the government and firms in real terms. So a debt crisis is averted! However, there is a social cost. People shift to assets such as gold and real estate that are hedged against inflation. Investment in such assets instead of say, machinery can lead to lower growth outcomes. Due to low real returns on debt instruments (such as bank deposits, bonds etc.) people may also shift to the stock market. Though the expected returns can be high, there is a risk, which is not always manageable by ‘ordinary’ households.

The government goes in for somewhat regular bailouts in different forms such as assistance for airline companies, loan waivers for farmers, protecting existing banks by putting barriers to entry for new ones etc.. Such bailouts can mitigate a financial crisis but they have high costs associated with them.

Yet another mitigating factor is the confidence among people that the government will almost certainly step in, should anything untoward happen in the banking system. The government adds to the capital of public sector banks (PSBs) despite being fiscally constrained: it sells bonds to banks, raises funds, and uses these funds to increase the capital of PSBs. See below a stylised balance sheet of a PSB - it has government bonds as assets and capital from the government as a liability. There is no net inflow of funds when PSBs are re-capitalised.

If the fiscal situation does not improve, then the confidence in banks is somewhat misplaced. Such confidence can help maintain macro-financial stability but it is not a reliable hedge against systemic risk.

The last mitigating factor is growth. Though there has been a slowdown in recent years, the growth rate in India in the last two decades has been high by international standards, and by India’s own historical record. Growth acts as a camouflage for several problems. However, the problems do not go away, they are just less visible.

To summarise, current policies do mitigate a financial crisis (Mohan 2011). However, there are problems with these policies.

While there are no quick fixes, long-term changes can be brought in gradually.

With fiscal correction, the government can gradually reduce the SLR and CRR, and hence financial repression in banks. The banking sector can then grow faster and play a greater role in economic development.

In Public Economics, a Pigouvian tax-subsidy scheme6 is often used to deal with externalities such as pollution. Similarly, a tax-subsidy scheme may be used to deal with macroeconomic shocks (Jeanne and Korinek 2010, Singh 2013). For example, sudden and large international capital flows may be discouraged by a temporary tax on such flows. If macroeconomic shocks can be dealt with in this way by fiscal policy, then the burden on the monetary policy can be reduced. So the central bank can focus on managing inflation instead of pursuing multiple macroeconomic objectives at the same time.

The real estate sector was left out of the liberalisation process that took place in the early 1990s. There is a need to remove the ‘license-permit-quota Raj’ that currently prevails in this sector7. The recent bills related to real estate passed in Parliament do not address these concerns.

After the large fall in the value of the rupee in September this year, the RBI is considering an increase in its reserves. This is not required. As suggested in my previous column on this portal, the RBI can instead buy international credit lines that work out cheaper than foreign exchange reserves8.

As suggested earlier on this portal9 the RBI can also provide inflation-indexed bonds more meaningfully than is the case at present10 . This can reduce demand for gold and help in other ways. The RBI can also set an example by not buying more gold, if not by selling its existing gold stock. This will give it greater moral authority to advise the public not to buy gold.