Impact of disinvestment policy on public sector enterprises in India 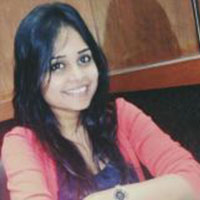 To address operational inefficiencies in PSEs without comprising on their social objectives, disinvestment policy is often used. However, there are concerns regarding the extent of impact on firm performance since disinvestment may involve transfer of ownership but not control. Analysing data from 1991-2010 on all manufacturing PSEs owned by the central government, this column shows that the average annual efficiency score of disinvested enterprises rose by almost 20%.

Public sector enterprises (PSEs) have an indistinct mandate of meeting objectives beyond the narrow paradigm of profit maximisation. Generating employment, investing in projects that have long gestation periods, setting up operations in certain locations, and regulating prices of some of their products, are some of the objectives that may fall under the social ambit of PSEs. When this multidimensional mandate is combined with an environment free of competitive pressure, PSEs may suffer from operational inefficiencies. To address this inefficiency without compromising on the social objectives that PSEs are expected to achieve, minor disinvestment may be a useful remedial policy.

Against this background, I examine the impact of disinvestment policy in India on all PSEs owned by the central government (CPSEs), during 1991-20102. CPSEs are run by managers (agent 1), which are appointed by government ministries (agent 2) on behalf of the citizens (owners). This double-agent problem may lead to ‘moral hazard’3 in the performance and management of these enterprises, thus resulting in efficiency losses. This feature of PSEs make them more susceptible4 (than private enterprises) to the external political and economic environment. The central feature of my study is built on this concept - performance of enterprises depends on a combination of internal factors and external conditions. More than 60% of CPSEs have a dynamic presence in a majority of states with a multi-plant production process (driven by considerations of reducing regional imbalances, generating employment, etc.) – hence, performance will be influenced by the external environment faced by each plant. The study attempts to take explicit account of the external environment of plants operating in different states.

I compile financial data on all manufacturing CPSEs, published by the Public Enterprise Survey, from 1991-2010. I augment this with data on disinvestment - a ‘dummy variable’ that takes a value of 1 only if a CPSE is selected for disinvestment in a particular year (otherwise the value will be 0). I control for state-specific political factors (focussing on ideology) that shape the local political environment in which enterprises operate: ideology of the state, and ideological differences between the Centre and the state. With the central government owning these enterprises, most decisions are driven by the ideology of the Centre. However, the business environment in which CPSEs operate is shaped by the policies and actions of state governments. In theory, right-wing governments have policies that are more beneficial to the industrial sector as compared to left-wing governments. Thus, enterprises operating in right-wing states are expected to perform better as compared to left-wing ones. Further, CPSE decisions are influenced by the ideological differences between the Centre and the state. Political parties at the Centre may hold back funds for states run by ideologically-dissimilar governments, which may be detrimental for all sectors in the state. Given the diversity of the context and gravity of the political ferment, ideological differences between the Centre and states are expected to have substantial ramifications for the performance of PSEs.

Data on ideology has been taken from past empirical studies (Chhibber and Nooruddin 2004, Dash and Raja 2014)5. To account for the multi-state presence of most CPSEs, I take the simple average of all state-specific political variables for each of the states in which a particular enterprise has an operational plant. This implies that for every firm there is a unique political variable score.

Gauging performance of CPSEs is not a straightforward task mainly because of the multidimensional objective function. Due to this ambiguity, choosing a measure that captures every dimension of the objective function is a mammoth task. Hence, I use a measure that is crucial to analyse performance of any firm, irrespective of the exact objective: firm efficiency. In a transition economy, efficiency is well-suited to gauge performance of firms that are maximising various goals. I calculate efficiency scores6 of all CPSEs in a particular industry.

The annual average efficiency score of all CPSEs rose by 19.3%, from 0.57 in 1991 to 0.68 in 2010. To show that disinvestment may be an influencing factor in explaining firm performance, the average differences between firms that were disinvested at least once during 1991-2010 and firms that were never selected for disinvestment have been presented in Table 1. It can be seen that all relevant variables are significantly different between the two groups. 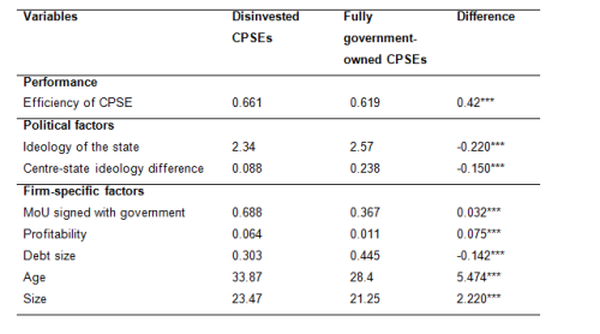 It is observed that disinvested CPSEs perform better than the ones that were never selected for disinvestment. The reason is likely that by transferring ownership to private investors the ambiguous multidimensional objective faced by the management of CPSEs becomes more focussed and this improves firm performance. Secondly, after disinvestment the enterprises are listed on the stock market, which acts as a monitoring and controlling device, by delivering information about the enterprise. It is also observed that disinvested enterprises operate in states that have a lower ideological score (right-winged) as compared to fully government-owned enterprises. Further, disinvested CPSEs are located in states that are ideologically more similar to the Centre as compared to fully government-owned CPSEs.

I find that performance of CPSEs has improved over time. Further, disinvested CPSEs operate in more favorable political environments: these enterprises are more likely to be located in states that are more right-winged and have an ideology that is more similar to that of the Centre. The better performance of CPSEs may be attributed to the favorable political environment in which these enterprises operate.

At the time of inception, the draft document on disinvestment stated bridging the deficit gap and improving CPSE performance as the two main objectives of disinvestment. The two objectives may seem independent of each other but the means to achieve them might be conflicting in nature. The best candidates for disinvestment in order to reduce fiscal deficit are the most valuable and profitable CPSEs as these can generate high proceeds. On the other hand, the worst-performing CPSEs are the best options for disinvestment if the objective is performance improvement. A careful approach involving dividing CPSEs on the basis of performance should be adopted7. The best-performing CPSEs must be treated as assets for the future. It is only the sick CPSEs incapable of being revived that demand strict intervention from the government. These CPSEs must be privatised or sold off for greater performance improvements.

Great read. Here's another excellent piece that talks about this theme/topic in a fair bit of detail: https://bit.ly/2Wdgitq