Long term recovery of the Indian economy depends on reforms 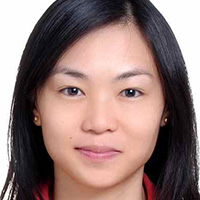 The Indian economy has been facing challenges in the form of sluggish growth, high inflation, and rising fiscal and current account deficits. This column highlights trends in the economic conditions, and outlines policy actions and reforms needed to put the economy back on track.

India’s economy faced a challenging 2012. This is reflected by the continued slowing down of GDP growth (Figure 1), inflationary pressures, and persistently high fiscal and current account deficits. The situation is further worsened by the sharp fall in the value of the rupee against the US dollar (25% decline since mid-2011). Besides, there is little sign of improvement in investment. Despite the government embarking on a reform programme in September last year, which included a long-awaited opening up to foreign direct investment (FDI), overall investment activity has remained subdued. Figure 2 shows a sustained slide in investment projects under implementation.

Therefore, whilst the reforms implemented by the government have somewhat assuaged investor sentiment and eased domestic liquidity1 conditions, more urgency may be needed in implementing the reform programme. This column aims to both highlight the broader trends in the economic conditions in India, and infer what policy actions and continued reforms are necessary to put the economy on the right track. 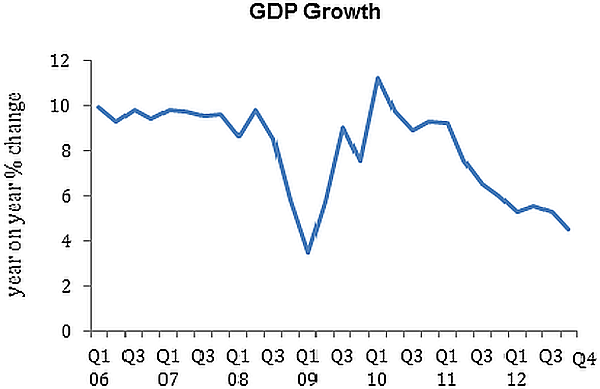 Figure 2. Investment in projects under implementation 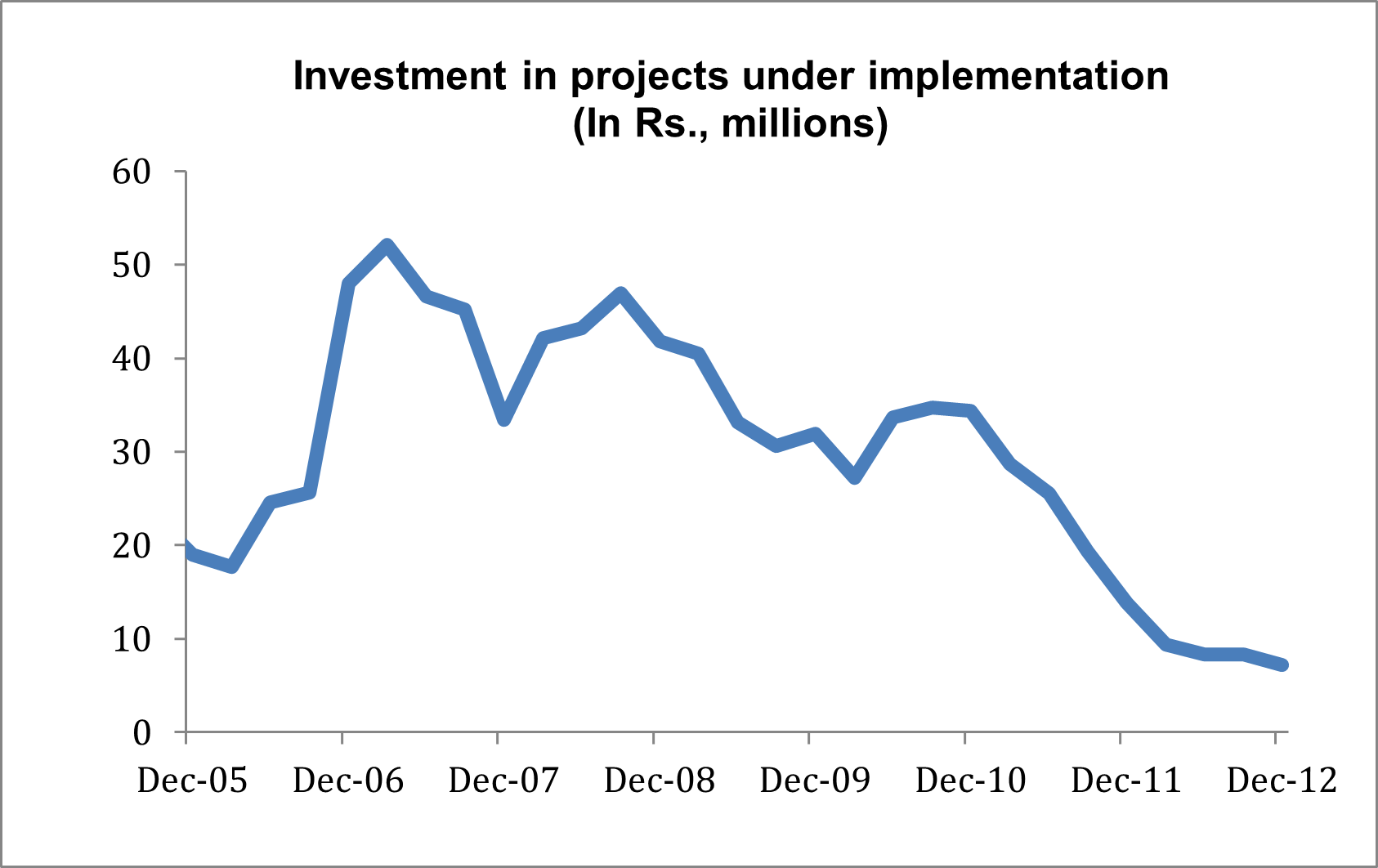 India faces a variety of short-term policy challenges, key among which is sluggish growth and high inflation. GDP growth slowed sharply to 4.5%2 in the last quarter of 2012, from 5.3% in Q3. Inflationary pressures remain persistent, despite headline inflation3 easing to 7.3% in the last quarter of 2012 from the highs of 9-10% over the last two years. The moderation was mainly on account of the recent cooling in (volatile) food and fuel prices. Inflation is still significantly above the Reserve Bank of India (RBI)’s comfort zone of 5-6% with underlying inflationary pressures being further supported by the pass-through effects of higher regulatory prices remaining incomplete4. Going forward, inflation expectations and core inflation5 are likely to remain elevated, limiting the scope for easing by the RBI to support GDP growth.

India’s twin fiscal and current account deficits have worsened in recent years. First, the twin deficits create a level of vulnerability for India that is a cause for concern. India’s expansionary fiscal policy (increase in government spending) to fight the 2008 global financial crisis has led to a dramatic deterioration in the country’s fiscal situation. Government spending in the form of several social programmes (particularly the Mahatma Gandhi National Rural Employment Guarantee Program (MNREGA)) has strained the government’s budget position, causing the overall fiscal deficit to widen from 4% in FY62007-2008 to 7% in FY2011-2012 (Figure 3). In the current financial year (2013-14), a fiscal deficit of 5.3% of GDP (an improvement over last year’s 5.8% of GDP) is targeted but the risks of slippage are high, given weaker tax revenue, disappointing proceeds from divestments and 2G auctions, as well as the larger-than-budgeted subsidy bill. This is despite recent reform efforts by the government to increase regulated diesel prices and reduce plan7 and non-plan expenditure. The elections scheduled for 2014 pose the risk of further increasing the fiscal deficit, should political pressures stall these reforms and result in increased spending on social programmes and domestic subsidies. 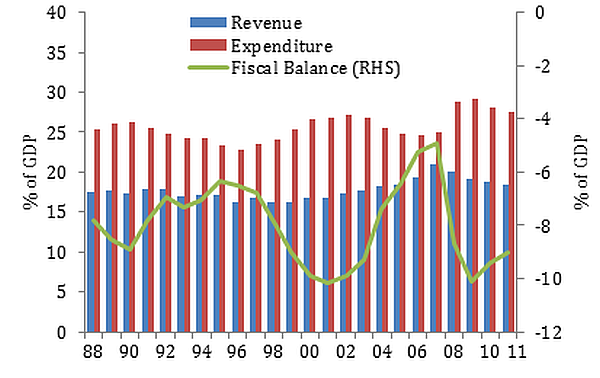 The government has announced a fiscal consolidation8 path to reduce the fiscal deficit to 3% of GDP by FY 2016-2017 but the details of how it will achieve this are unclear. India’s fiscal deficit remains one of the highest in the region and this limits its ability to use counter-cyclical policy9 to attenuate the growth slowdown. Although India’s high fiscal deficit constitutes a key vulnerability, there is no immediate financing problem since it is funded primarily by domestic banks and other non-financial institutions like pension/ insurance funds. However, the high deficit does dampen investment activity as it reduces the availability of credit for private firms. Fiscal consolidation is therefore a pre-requisite for an upturn in the credit cycle.

The widening current account deficit (CAD) also remains a major source of concern. While the approach of stimulating domestic demand via fiscal expansion in 2008 put India’s economy back on track after the global financial crisis, the inertia in withdrawing stimulus had subsequently led to a spike in inflation that prompted monetary policy tightening10, and dampened aggregate demand. Gross investment (especially private) and savings slowed as a result. Total savings declined from the peak of 36.8% in FY2007-2008 to 32.3% in FY2010-2011. This decline of 4.5% of GDP exceeded the fall in gross investment of 3% of GDP during the same period. Reflecting the widening gap between savings and investment, India’s CAD increased in the post-credit crisis period (Figure 4). The decline in total savings, a large part of which stemmed mainly from the erosion in public savings due to falling government revenues, has pushed the CAD to the highest level since the 1991 balance of payments (BOP) crisis. During the 12 months ending March 2012, India had a CAD of $78.2 billion or 4.2% of GDP, which widened to 5.4% in the third quarter of 2012. This diverged from the -0.5 to -2% of GDP during 1990-2000, which policy makers have been conservatively maintaining since the 1991 BOP crisis. Historically, India has run a CAD primarily due to the policymakers pushing investments and growth higher than that supported by the domestic saving rate. After FY2008-2009, however, savings have been declining at a much faster rate than investment. 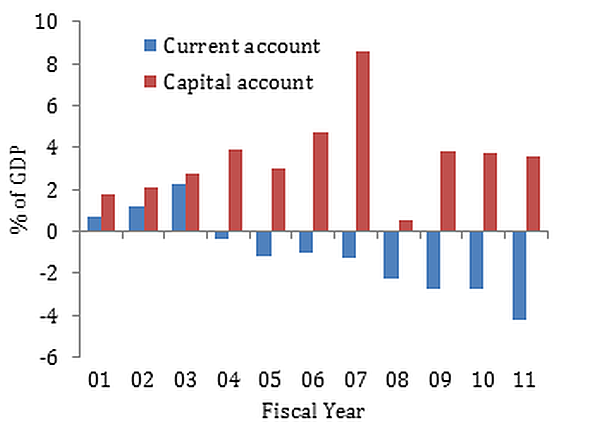 A widening CAD could potentially lead to pressures on the country’s BOP and the currency. Although India’s CAD has been offset by capital account surpluses, nearly three-quarters of the deficit for the past four years was estimated to be funded by more volatile sources of capital, including commercial loans, trade credit and portfolio equity and debt inflows (Figure 5). Considering India’s high CAD, the risk of slowdown in capital inflows will exacerbate the funding risks and currency depreciation pressures. India’s rising CAD raises serious questions about its sustainability, particularly against the backdrop of volatile global conditions and volatile capital flows. The RBI had carried out an analysis showing that with GDP growth of 7%, a CAD-GDP ratio of around 2.5% is sustainable. With India’s CAD already exceeding this threshold level, its external vulnerability is expected to rise further. 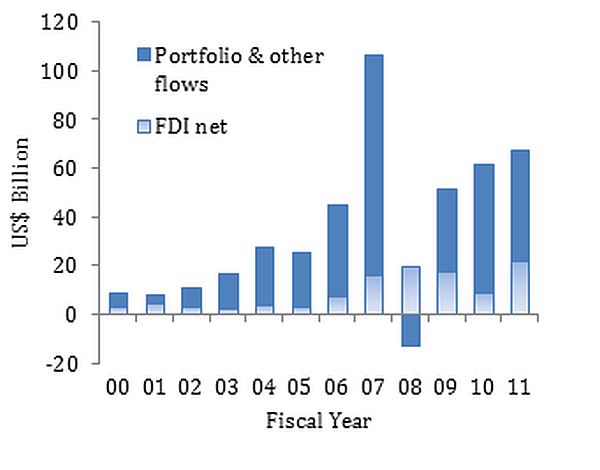 India will need better macroeconomic performance and concerted policy action to fundamentally tackle the twin deficits as well as elevated inflation. To continue to improve the economic environment, a number of reforms in infrastructure, fiscal and financial areas are crucial. The reforms thus far have focused on increasing FDI, raising administered prices to reduce the fiscal deficit, restructuring the power sector etc. While the significant structural reforms require Parliamentary approval, the ones more likely to go through are those that require executive decisions11. For instance, key bills that could be introduced include the Land Bill, the Pension and Insurance Reform Bills and the new Companies Act (Table 1). If these are implemented, they would provide some impetus to an economy that needs more than just a good start to the reform process.

The government’s recent moves to improve the deteriorating growth-inflation trade-off is a good start and step in the right direction, but it will be some time before investment fully recovers to lift growth. India’s economy still faces significant challenges in the form of elevated inflation and the ugly twin deficits. Despite the weakening of growth momentum, inflationary pressures have persisted, driven by high commodity prices as well as structural demand and supply imbalances13. Inflation expectations14 are also expected to remain sticky15, creating not merely a risk of further increase in inflation in the near future but also likely to lead to a surge in gold imports (which was a key factor worsening the CAD over the last two years) to protect from inflationary pressures. The persistent fiscal deficit and the declining rupee pose potential threats for further inflationary pressures.

Clearly, ongoing structural reforms are important to rectify the macroeconomic imbalances and to stimulate investment. High inflation has complicated the RBI’s management of the rupee, while the twin deficits significantly limit the monetary space for more aggressive countercyclical policy measures. Infrastructural investments need to increase in order to alleviate supply bottlenecks and bring about non-inflationary growth. Thus far, it is a good sign that the government is finally biting the bullet and embarking on reforms to restore confidence. However, much more still needs to be done and reforms should be sustained in order to lead to a more meaningful improvement in India’s macroeconomic environment.