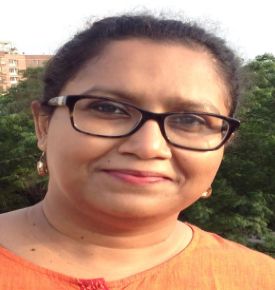 Various studies have noted that vast inequalities – economic and socio-demographic – exist in maternal, newborn, and child health outcomes and utilisation of care services. In this post, Sohini Paul explores how inequality in the use of these services changed in the 10 years following the launch of the National Rural Health Mission in 2005. While service utilisation by the poor increased and the rich-poor gap declined in this period, coverage remains low among the poor and inequality persists.

India has, undeniably, made significant progress in improving the maternal, newborn, and child health (MNCH) situation over the past decades. However, the country is yet to reach the targets set for MNCH outcomes in national policies and international conventions. For example, although the maternal mortality ratio has declined from 301 per 100,000 live births in 2001-03 to 130 in 2014-16, India is yet to achieve the National Population Policy’s goal of reducing the figure to 100 by 2010, or the Millennium Development Goal of 109 by 2015.

Earlier studies have noted that wide inequalities – economic and socio-demographic – exist in MNCH outcomes and utilisation of MNCH services (Jejeebhoy and Santhya 2014, Paul et al. 2011). An analysis of who benefitted most from improvements in MNCH care services during 1992-2006, covered by first three rounds of the National Family Health Survey (NFHS), suggests that increments in antenatal care and skilled attendance at delivery were more likely to have been experienced by non-poor than poor mothers (Pathak, Singh, Subramanian 2010).

To improve the scenario, the Indian government implemented the National Rural Health Mission (NRHM) in 2005 with the intention of providing accessible, affordable, accountable, and good quality health services to all, especially to the poorest and those in the most remote areas of the country (Ministry of Health and Family Welfare, 2005). Under NRHM, Janani Suraksha Yojana, a conditional cash transfer scheme aimed at encouraging institutional delivery, was introduced; and Accredited Social Health Activists (ASHAs) were involved to serve as a link between the community and the public health system. The programme also emphasised the need for upgrading and strengthening facilities and infrastructure and skilling of healthcare providers. The NRHM was subsequently restructured as the National Health Mission (NHM) in 2013, to address the health needs of the urban population as well. Furthermore, under the national Reproductive, Maternal, Newborn, Child Health + Adolescent (RMNCH+A) initiative, a continuum of care model has been proposed that focuses on the pre-pregnancy stage shortly after marriage, and extends to the child care phase of the life cycle (MOHFW, 2013).

Outcome variables included the key components of care spanning over three stages of the continuum of care in maternal health: antenatal care, care during child delivery, and postnatal care. I estimate the average coverage of women who: (i) had their first antenatal check-up in the first trimester; (ii) received four or more antenatal check-ups; (iii) received at least two tetanus toxoid (TT2) injections; (iv) consumed iron and folic acid supplements (IFA) for at least 100 days; (v) underwent the following check-ups and tests at least once during antenatal visits – weight, blood pressure, blood test, urine test, and abdominal examination;(vi) had an institutional delivery; (vii) had skilled birth attendance during delivery; and (viii) received a health check-up within 48 hours of delivery.

I assess the evolution of inequality in utilisation of MNCH services between 2005-06 and 2015-16 by using Concentration Index (CI), a commonly used measure capturing relative inequality. CI quantifies the extent to which a health service coverage indicator is concentrated among the poorest or the richest.

A comparison of the coverage of MNCH services in 2005-06 and 2015-16 shows that their utilisation has increased significantly since the launch of NRHM, regardless of the indicator used (Figure 1). However, the magnitude of improvements in coverage varies widely across indicators. For example, the highest increases over this period were observed for institutional delivery (from 41% to 81%), skilled birth attendance (50% to 83%), post-partum checkup within two days of delivery (36% to 65%), and receiving comprehensive tests and check-ups at least once during antenatal visits (35% to 64%). In comparison, the smallest increases were experienced for receiving two doses of TT injections (76% to 83%), at least four antenatal check-ups (37% to 51%), first check-up in the first trimester (44% to 58%), and consumption of IFA supplements for at least 100 days (15% to 30%).

Note: Change in coverage between 2005-06 and 2015-16 was statistically significant for all indicators and all the three groups, except for the difference in the proportion of women who belonged to the wealthiest quintile and received their first antenatal check-up in the first trimester.

Coverage increased significantly among poorest women, regardless of the indicator. However, the magnitude of improvements was larger among the poorest than among the richest, which is understandable given the low initial coverage of these indicators among the former. The analysis also reveals that despite greater improvement increase among the poorest, the level of health care services utilisation among them in 2015-16 remained far below that of the wealthiest in 2005-06.

Inequality in utilisation of MCH services by household wealth status had reduced during 2006 and 2016 for all the indicators of MNCH care service coverage though magnitude of decline varies widely. In Figure 2, I present relative inequality in terms of CI*100. The largest decline in inequality was observed for institutional delivery, followed by skilled assistance during child birth, postnatal checkup within two days of child delivery, and receipt of comprehensive check-ups at least once during antenatal visits. On the contrary, the smallest decline was experienced for receipt of fist checkup in first trimester, followed by consumption of IFA supplements for at least 100 days, and four or more antenatal care visits during pregnancy. 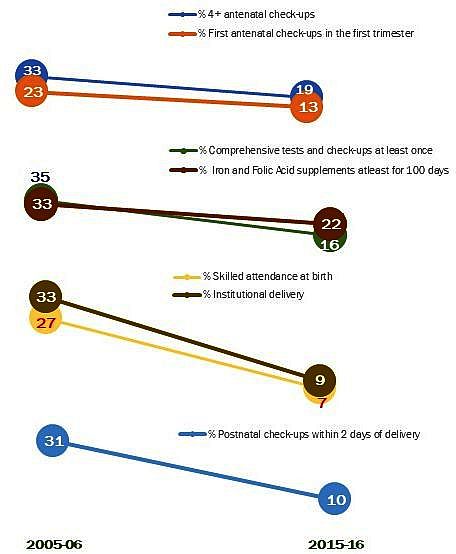 Despite decline in inequality during the inter-survey period, findings show that inequality persists. The indicator that becomes the most equitable is receipt of two doses of TT2 injections in 2015-16. This is followed by skilled birth attendance and institutional delivery. The indicators for which there was least reduction in inequality include consumption of IFA supplements for at least 100 days, receipt of four or more antenatal check-ups, and receipt of comprehensive health check-ups at least once during antenatal visits, and receipt of first check-up in the first trimester.

These findings call for further policy attention on MNCH care services for the poor. Interventions such as information campaigns using interpersonal channels and mass media, incentivising comprehensive antenatal care-seeking, increasing the number of frontline workers and lower-level facilities in areas that are most in need, task-shifting and strengthening capacity of various cadres of healthcare providers to extend the continuum of care, and providing ongoing mentoring to healthcare providers, can be tested at scale.

This work was supported by Mac Arthur Foundation. The author is grateful to Dr K. G Santhya for her valuable inputs.