It has long been known that maternal health in India is extremely poor (see, for example, Ramalingaswami et al. 1996). Unfortunately, though, India has no national system to monitor health during pregnancy, so it is difficult to know exactly how bad things are. My recent research reveals that the state of maternal health in India is even worse than we previously thought (Coffey 2015).

It is important to study maternal health and nutrition because of its implications for child health. Infants whose mothers do not weigh enough before pregnancy, and who do not gain enough weight during pregnancy, are more likely to die in the first month of life. Infants born to undernourished mothers are also more likely to be low birth weight, which is associated with height and health in childhood and adulthood, as well as cognition and economic productivity.

What is the average pre-pregnancy body mass in India? What fraction of women is underweight at the outset of pregnancy? How much weight do women gain during pregnancy? The answers to these questions were previously unknown because, unlike in the United States, where the Centers for Disease Control monitor health in pregnancy, there is no national monitoring system for India. Prior studies of maternal health in India cite the fraction of women in the 15-49 years age group who are underweight as per the National Family Health Survey (NFHS)-3 - 35.5% - as an estimate of pre-pregnancy underweight. However, this estimate is an average for all adult women; it is an incorrect estimate of pre-pregnancy underweight if women who become pregnant have different BMI scores than women who do not become pregnant.

In India, one important characteristic on which pregnant women differ from other women is age. The red curves in Figures 1a and 1b below show that pregnancy in India is concentrated between the ages of 18 and 25. These are also the ages at which women are most likely to be underweight. In order to present a more accurate estimate of pre-pregnancy body mass and fraction underweight in India, I adjust for selection into pregnancy based on age, and a number of other characteristics that are associated with both pregnancy and body mass. Using the latest nationally representative data on women´s weights and heights from the NFHS-3, I find that the average BMI of pre-pregnant women in India is 19.5, and that the fraction of pre-pregnant women who are underweight is 42.2%. This is almost 7 percentage points higher than the fraction underweight among women of child-bearing age!

Figure 1a. Proportion of women who are pregnant women by age, in India and sub-Saharan Africa 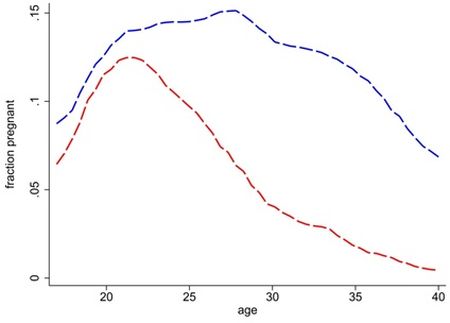 Figure 1b. Proportion of non-pregnant women who are underweight, in India and sub-Saharan Africa 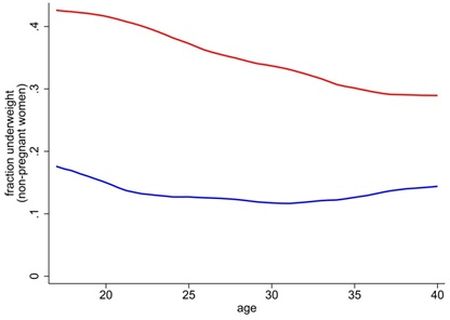 My research uses a variety of econometric strategies to estimate weight gain during pregnancy in India and sub-Saharan Africa. It finds that women in both regions gain about 7 kgs on average, which is only about half the weight gain recommended by the US Institute of Medicine. Although women in both regions gain similarly small amounts of weight during pregnancy, severe pre-pregnancy deficits in India mean that Indian women end pregnancy weighing even less, on average, than women in sub-Saharan Africa do when they begin pregnancy.

More research is needed to understand why maternal nutrition in India is so poor, and why it is so much worse than in sub-Saharan Africa. However, the social science and epidemiology literatures already point to some likely reasons. It is widely recognised that the status of women in India is much worse than in sub-Saharan Africa: sex ratios in sub-Saharan Africa are more balanced, and sex gaps in education, working outside the home, and child mortality are not as large. In India, young, newly married women are at the bottom of household hierarchies, and have lower social status than older women. At the time that Indian women become pregnant, they are often expected to keep quiet, work hard and eat little. Rather than investing in pregnant women, household decision-makers in India often discriminate against them.

Pregnant women in India not only suffer the consequences of low social status, but also of an exceptionally poor disease environment. The 2011 Indian census found that about 70% of rural Indian households defecate in the open, which spreads parasites and intestinal diseases, making it difficult for people to use the energy and nutrients they get from food. Although more research is needed in this area, it is likely that infectious disease is responsible for a significant proportion of India’s pre-pregnancy underweight problem.

Proposal: A national monitoring system for health in pregnancy

Existing programmes are currently doing little to help improve maternal health in India. The biggest maternal health programme, Janani Suraksha Yojana, encourages women to deliver in hospitals but does not target weight during pregnancy, and has been shown to have no impact on neonatal mortality (Mazumdar et al. 2011). The ICDS, which is supposed to distribute free food to pregnant women, reaches only a small fraction of the population. The DLHS 2007, for example, found that less than 30% of women received any supplementary food during their last pregnancies. This figure masks considerable state-level variation in coverage; in Uttar Pradesh and Bihar, where about a quarter of pregnant women in India live, and where pregnant women are especially likely to be underweight, less than 10% of women got supplementary food during their last pregnancy. Further, despite the fact that the 2013 National Food Security Act promised a cash transfer of 6000 rupees per pregnancy, this program has not been implemented beyond a small, poorly functioning pilot project in a few districts.

Attempts to improve maternal health will have to take into account that important causes of poor health in pregnancy stem from household-level decisions over which the state has little direct control. Intrahousehold allocation away from young women make it very difficult to distribute food in ways that improve the body mass of pregnant women, and thereby the weights of infants. Improving the disease environment by reducing open defecation is likely to be extremely challenging because villagers’ ideas about purity and pollution, and rural India’s legacy of untouchability, lead people to reject affordable latrines (see Coffey 2014).

An important first step to improving pregnancy outcomes would be for the government to monitor maternal health by tracking a nationally representative sample of women throughout their pregnancies. That way, we wouldn’t need to rely on out-dated cross-sectional surveys to estimate these important indicators of maternal health. A national monitoring system would also allow policymakers to see how maternal health changes over time, and to see whether it changes following new programmes.