Open defecation in rural India is a human development emergency that is causing infant deaths, child stunting, and widespread infectious diseases. This column presents surprising qualitative and quantitative research about why so many people in rural India defecate in the open, even when latrines are available.

For the past ten months, I have been part of a team of qualitative and quantitative researchers who have been investigating sanitation beliefs and attitudes of people in the rural parts of six north Indian states and the plains of Nepal (For more information about the quantitative SQUAT (Sanitation Quality Use Access and Trends) survey, in which we interviewed people in over 3,200 households, click here, and for more on the qualitative study, in which we conducted in-depth semi-structured interviews with people in 99 households, click here). What we find about why so many people defecate in the open may surprise you, and it has direct implications for how we should go about trying to reduce open defecation.

Although the Indian media often claims that people in rural areas are ‘forced to defecate in the open’ due to ‘lack of access to latrines’, Figure 1 shows that there is little relationship between Gross Domestic Product (GDP) per capita and open defecation rates in poor countries around the world. Indeed, all three rounds of the National Family Health Survey (NFHS) show that Muslims in India are more likely to use a latrine than Hindus, despite being poorer on average. The reason why there is little relationship between wealth and latrine use is because latrines that can prevent the spread of infectious diseases are actually very inexpensive. Many people in Bangladesh build and use latrines that cost only about Rs. 2,000 – 3,000 (approximately US$33 – US$50), and these latrines have led to a decline in infant mortality and a reduction of stunting. 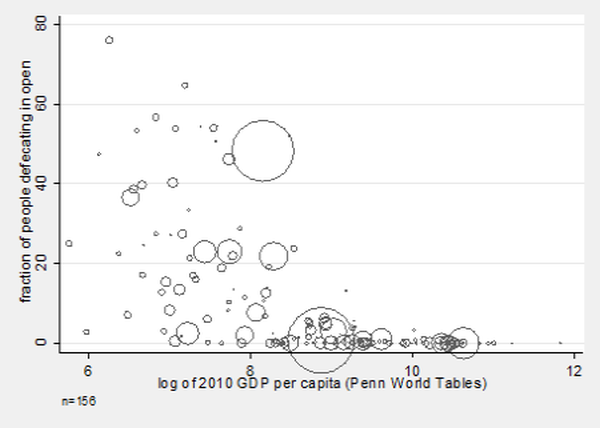 Data sources: GDP per capita from the 2010 Penn World Tables, and fraction of people defecating in the open from the UNICEF/WHO Joint Monitoring Report (2010).

Some observers have suggested that people in rural India do not use latrines because of lack of water. However, in the SQUAT survey, only 3% of people who defecate in the open mentioned lack of water as a reason for not using a latrine. Indeed, in rural India, where about 70% of households defecate in the open, 90% of people have access to what the WHO-UNICEF Joint Monitoring Report calls “an improved water source”.1 In contrast, in sub-Saharan Africa, less than half of people have access to improved sources of water (49%), but far fewer people (35%) defecate in the open. Additionally, variation in access to water within India suggests that water is not an important constraint on latrine use. In the 2005 India Human Development Survey, rural households with piped water are only 9 percentage points less likely to defecate in the open than rural households without piped water, a difference which can be completely accounted for by differences in socioeconomic status between households that have piped water and those that do not.

What about broken or clogged latrines? Could this be a reason why people in rural India do not use latrines? But we have to ask: why are so many latrines in India broken or poorly maintained? People who have demand for latrine use invest in repairing broken latrines and those who have low demand likely do not. Additionally, both the SQUAT survey and the qualitative study find that many people who have working latrines do not use them. The SQUAT survey of 13 districts in Rajasthan, Madhya Pradesh, Uttar Pradesh, Bihar and Haryana found that 40% of households with a working latrine had at least one person who defecates in the open. The companion qualitative study of Gujarat, Uttar Pradesh, Haryana, and the Nepali terai found that 56% of the 66 latrine-owning households with whom we did in-depth semi-structured interviews had at least one person who defecates in the open.

Why is open defecation so widespread in rural north India?

The 99 in-depth, semi-structured interviews that we conducted in Gujarat, Haryana, Uttar Pradesh and the Nepali terai reveal a set of cultural factors that both encourage open defecation and discourage the use of affordable latrines. The cultural meanings that people attach to latrine use often differ by religion. In particular, Muslims are generally less averse to owning and using affordable latrines, which need to have their pits emptied every few years, than Hindus, who tend to view such latrines as ritually impure and are extremely concerned about emptying pits, or having them emptied.

Both Hindus and Muslims in our interviews spoke about the benefits of open defecation. Both groups associate open defecation with good health and with a wholesome rural life. In the qualitative study, more than half of respondents living in households in which someone uses a latrine thought open defecation was healthier than latrine use. Open defecation is associated with rising early, and being industrious, as well as with strength and exposure to healthy fresh air. Many people who defecate in the open despite having access to their own latrine explain that they do so because they find it enjoyable and healthy.

In addition to articulating many perceived benefits of open defecation, many of our respondents do not want to own or use the kind of simple, affordable latrines that would save lives and reduce stunting. Even the latrines provided by the Indian government, which are often more expensive than many privately-built latrines found in sub-Saharan Africa and Bangladesh because they have a brick and cement superstructure, are seen as socially unacceptable.

Why are such latrines socially unacceptable? Firstly, many people think that having such a latrine near the house would be ritually polluting. Second, because cleaning feces is associated with “untouchables” (the lowest group in the caste system), emptying latrine pits when they are full is an important concern to potential latrine owners. Indeed, the SQUAT survey found that the median pit size of a privately-constructed latrine was 240 cubic feet, which is 4-5 times the pit size that the World Health Organization (WHO) recommends for a family of 6. Such a latrine pit would need to be emptied approximately every five years.

Figure 2 shows the pit size recommended by WHO; pit size recommended by the Indian government’s sanitation programme guidelines (approximately the same size as that recommended by WHO); the median privately-constructed pit size from the quantitative survey; and the most commonly cited ‘ideal’ pit size from the qualitative survey. Although in other parts of the developing world, latrines have pit sizes of around 50 cubic feet, in rural India, most people think that only very expensive latrines with large septic tanks are socially acceptable. This socially constructed definition of what constitutes an acceptable latrine means that almost everyone in a village agrees that latrines are luxuries that are only accessible to the richest rural households. 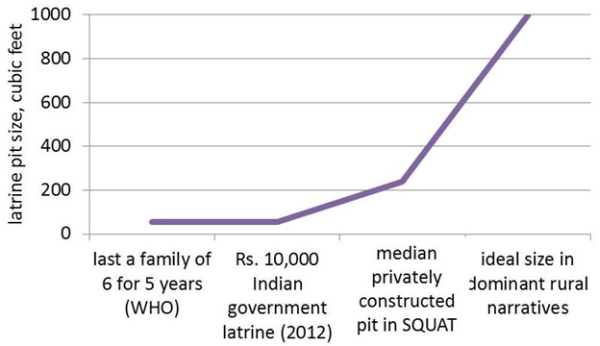 Muslims in rural India are often an exception to this rule. Ideas about ritual purity and pollution have different cultural meanings for Muslims, and they are more likely to build and use the kinds of simple, affordable latrines that save lives in the rest of the developing world. NFHS-3 found that while 77% of rural Hindu households defecate in the open, 55% of rural Muslims households defecate in the open. Most of the difference in open defecation rates between the two groups is due to Muslims’ adoption of affordable latrines. Although rural Indian Muslims had slightly higher rates of expensive septic tank ownership than rural Hindus (16% of households vs. 12.5% of households), they had much higher rates of ownership of pit latrines (23.4% of households vs. 9.3% of households), which are typically less expensive. 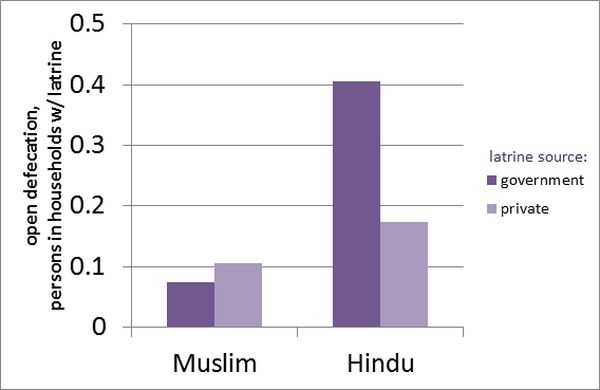 Our research suggests that focusing on latrine construction without changing attitudes and beliefs about latrine use are unlikely to importantly reduce open defecation. Making the use of affordable latrines socially acceptable and desirable needs to be the cornerstone of new policies and practices because giving away the kinds of latrines that rural decision makers currently demand is prohibitively expensive. Indeed, the respondents of the SQUAT survey estimated that a minimally acceptable latrine would cost Rs. 21,000 ($350 approx.). Most of this high cost is due to the fact that people want very large pits. Even with no leakages or administrative costs, building a Rs. 21,000 latrine for each of the 123 million Indian households that lacks one would cost Rs. 256,000 crores ($42.6 bn approx.), or about one-sixth of the annual total expenditure of the Government of India in 2012-13. This is therefore not a serious policy alternative to building demand for affordable latrines.

Despite the fact that most people can already afford the kinds of latrines that would prevent death and disease, cultural factors make the use of these life-saving latrines socially unacceptable. Efforts to reduce open defecation must take into account that many rural people consider open defecation to be part of a wholesome life, and that many people avoid latrine use because latrines and pit emptying are seen as ritually polluting. Public conversations aimed at changing beliefs, attitudes and norms about latrine use are an important first step towards preventing disease, reducing stunting and saving children’s lives.

This is the first of a three-part series on open defecation in rural India. In the next part (to be posted on Monday, 18 August 2014), Michael Geruso (University of Texas, Austin) will discuss what the Muslim mortality paradox tells us about the importance of sanitation for all children in India.