Searching for the soul of monetary policy in India

What is the thinking behind the current policy of the Reserve Bank of India? This column argues that its rules for deciding on India’s interest rates are based on assumptions that hold in developed economies – but not necessarily in India. Indeed, in many cases this leads to precisely the wrong policy decisions.


The recent decline in economic growth in India has led to a renewed focus on the Reserve Bank of India (RBI). Different interest groups ranging from government functionaries to industrialists to commentators have been expressing their hope that the RBI will cut interest rates to provide a jump-start to the faltering economy.

But what is the thinking underlying the conduct of monetary policy in India? I shall argue here that the current practice in India is based on the sort of monetary policy principles practiced in developed economies and that this is despite there being little evidence that such a policy approach is appropriate for India. I shall outline an alternative premise for monetary policy based on ﬁnancial market frictions that are likely to have far greater relevance for a country like India. Controversially, this alternative approach often has diametrically different implications for policy than what is now practiced by the RBI. In particular, where current practices would recommend countercyclical monetary policy – in other words a cut in the interest rate during an economic downturn – under the alternative paradigm, monetary policy may need to be procyclical – in other words, no such cut.

Sticky prices and the Taylor Rule

The ﬁrst question is important in that if markets are working without distortions then the price signals will automatically induce private responses that implement the socially optimal outcome. In that event there is no role for any policy intervention. Of course, this ‘efficient’ outcome only arises in very special cases where prices are freely ﬂexible, there are no information frictions, asset markets are complete, there are no externalities, and so on. If any one of these conditions fails to apply then there is a role for policy interventions.

The typical justiﬁcation for monetary policy intervention is that prices are often sticky or rigid in the short run. As a result, market outcomes are not optimal. The monetary authority can raise social welfare by using monetary policy to induce the socially optimal outcome. Most modern central banking in developed countries is organised around the Taylor Rule, named after John Taylor of Stanford University who originally articulated it. This principle is grounded in the sticky-price friction. The intellectual heft behind the Taylor Rule was provided by Woodford (2002) who showed that under some conditions a version of the Taylor Rule could be derived as the optimal monetary policy rule from a macroeconomic model where prices were sticky in the short run.

The intuitive idea behind the welfare theoretic motivation of the Taylor Rule comes from the underlying sticky price friction. The goal of policy when prices are sticky is to keep output as close as possible to the level that would arise under ﬂexible prices. In these sticky price models the deviation of output from the ﬂexible price level arises due to two reasons: deviation of average output from the efficient level; and dispersion in individual output levels. The latter is a function of the dispersion in individual prices, which in turn is a function of the average level of inﬂation in these economies. Hence, the optimal rule that emerges from these sticky price models (under fairly special conditions) is for the policymaker to minimise aggregate output deviations from the natural rate, and inﬂation deviations from the target inﬂation rate. The mapping of the policy interest rate to these goals then depends on the speciﬁcs of the monetary transmission mechanism.

The Taylor Rule is based on two key beliefs. The ﬁrst is the belief that higher rates reduce GDP growth as well as inﬂation by reducing aggregate demand. The second belief is that higher growth and higher inﬂation often go together which leads to a policy trade-off between inﬂation and growth. Thus, during periods when inﬂation is above trend, the Taylor Rule dictates that the policymaker should raise interest rates tor reduce inﬂation. In the process, the policymaker should be willing to absorb some reduction in GDP growth. But since these are likely to be periods when growth is also high relative to trend, the cost is relatively low. On the ﬂip side, the principle holds that when GDP growth is low, rates should be cut. Hence, policy should be countercyclical.

How well does the Taylor rule describe monetary policy in India? Figure 1 shows the actual Repo rate and the forecasted Repo rate (REPOF) from an estimated Taylor rule for India between 2001 and 2011. While the ﬁt isn’t exact, the forecasted Repo rate tends to anticipate the swings in the actual repo rate. This suggests that the RBI’s pronouncements explaining its monetary policy stance are well described by a version of the Taylor Rule. The weights that the RBI places on the two components may well change over time in response to changing economic conditions or to personnel changes in its governing council. But the basics of its operating procedure are grounded in the Taylor Rule.

Figure 1: The Taylor Rule in India 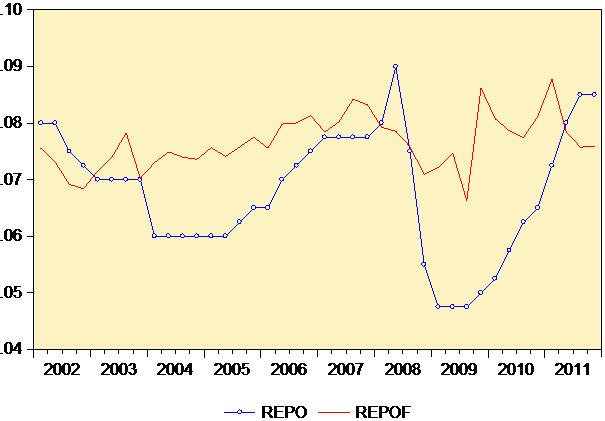 How well grounded is the idea that inﬂation and growth tend to co-move in India? Figure 2 shows the scatter plot of quarterly GDP growth (horizontal axis) and CPI inﬂation (vertical axis) in India from 1997-1998 to 2011-2012. The Figure makes clear that the relationship is weak, at best. The correlation between the two variables is just 0.1. The problem with this is that it suggests that the RBI is as likely to be faced with low growth and high inﬂation (as is the current situation in India) as it is to encounter high growth and high inﬂation. The resultant policy trade-off implicit in following the Taylor Rule is thus an order of magnitude more tricky in India. 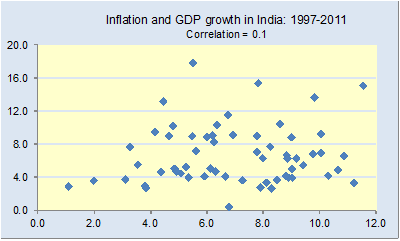 What about direct evidence on the fundamental friction underlying these models, i.e., evidence on the degree of stickiness of prices? There have been quite a few studies on the persistence of posted prices of goods in the developed countries. These studies suggest that the median length of a posted price tends to be between one and two quarters. What about evidence on the degree of price stickiness in India? Unfortunately, I am yet to come across any study — official or researcher initiated — that has attempted an estimation of this.

In summary, the Taylor Rule of monetary policy is problematic when applied to India. A key belief underlying the rule appears to be violated in the data. Perhaps most disturbingly, there is no direct information on the degree of price stickiness in India, which is the fundamental friction underlying the Taylor rule.

A well-known feature of the Indian economy is that access to asset markets and instruments is extremely limited. About 140 million households in India do not have access to any formal banking at all. Consequently, less than half of all individuals have access to any formal ﬁnancial services. One of the key goals of the XI Five-Year Plan is to make growth more inclusive and ﬁnancial inclusion is a key component of that goal. Recent speeches by RBI officials have been stressing the importance of ﬁnancial inclusion and outlining initiatives to increase it. It is thus abundantly clear that there is endemic and widespread segmentation in asset markets in India with only a small subset of India having access to formal asset markets. But curiously, discussions about monetary policy in India are completely divorced from this asset market segmentation.

The role for policy arises when there is a friction or distortion in the economy. Segmented asset markets are one such friction. In recent years, there have been a slew of papers focusing on segmented asset markets as the primary friction that generates real effects of monetary policy (e.g. Chatterjee and Corbae 1993, Alvarez, Atkeson and Kehoe 2001). The business cycle implications of these models for the USA have been studied exhaustively by Occhino (2004, 2008).

How does asset market segmentation impact the monetary policy calculus? In this case the central bank needs to use monetary policy to provide insurance to those that are absent from these markets. This policy imperative can naturally imply very different monetary policy responses relative to when prices are sticky.

As an example, together with my co-authors, I show that optimal monetary policy is procyclical in environments with segmented asset markets (Lahiri et al. 2007). Intuitively, the role of policy under this friction is to protect households that are excluded from asset markets from excessive fluctuations in their consumption levels. When output is high, consumption of these households tends to rise due to (a) higher income; and (b) higher real money balances as the exchange rate tends to appreciate. By expanding money supply, the central bank can inﬂate away some of the increase in real balances and thereby moderate the rise in consumption. This procyclicality of the optimal monetary policy is clearly at odds with the Taylor rule prescription that monetary policy should be countercyclical.

Conduct of monetary policy needs identiﬁcation of not just the source of the shocks hitting an economy but also the key friction that policy is aiming to address. My reading of current monetary policy practice suggests that there has been scarce attention given to the main frictions in the Indian economy. Current monetary policy appears to be based on a routine application of developed country principles to the Indian context, a leap that may well be completely misplaced. The widespread lack of access to the formal ﬁnancial sector in India is an obvious friction -- one that may entail a very different monetary policy response than what is dictated by the sticky-price paradigm.

The need of the hour is a two-fold approach.