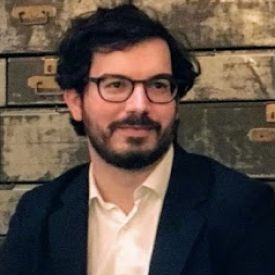 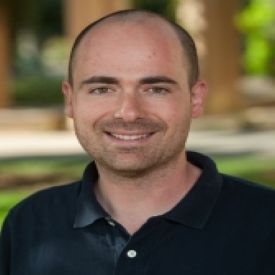 Two remarkable facts of the globalisation process witnessed in the last 25 years are the large increases in both trade in intermediate goods and in capital mobility. Before the 1990s, trade in final goods accounted for most of the value of world exports and international capital mobility was relatively low. In contrast, after the 1990s, trade in intermediate goods, or ‘unbundling of production’, has become more prominent over time (see Figure 1) and global supply chains have emerged – a phenomenon termed ‘New Globalisation’ by Baldwin (2016). There has also been a sizeable growth of both gross and net international capital flows (for example, Lane and Milesi-Ferretti 2007). Some authors have blamed globalisation for the increasing inequality and loss of jobs in developed countries (for example, Acemoglu et al. 2016). However, there has not been any theoretical analysis of the long-run effect of unbundling of production on inequality between and within countries. 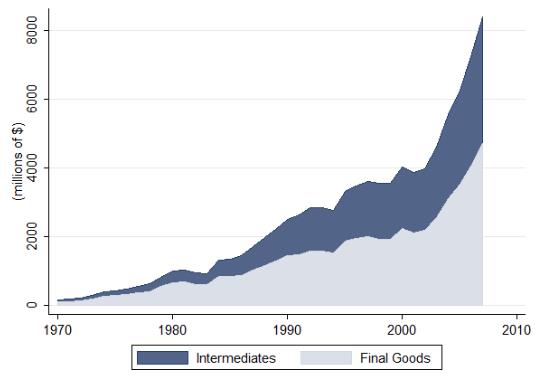 A distinctive feature of intermediate goods, which we document in a recent paper (Basco and Mestieri 2019a), is that they are more heterogenous in capital intensity than final goods. Factor proportion (Heckscher-Ohlin) trade models emphasise that trade in goods which are heterogenous in capital intensity creates winners and losers from globalisation because trade alters the relative return to factors of production. Moreover, since capital can be accumulated, trade in intermediates can have dynamic effects through altering countries’ savings rate. In addition, capital mobility implies that trade in intermediates can affect the global allocation of capital. Changes in the global allocation of capital also affect returns to other domestic factors of production (for example, labour), to the extent that capital and labour are complements in production. In sum, trade in intermediates (unbundling of production) has the potential to affect the redistribution of capital and labour between and within countries.

We theoretically analyse the long-run effect of unbundling of production on the world income distribution. Our growth model is similar to Acemoglu and Ventura (2002), but we introduce intermediates heterogenous in capital intensity and allow for capital mobility. Countries only differ on Hicks-neutral aggregate productivity. Our main result is that trade in intermediates generates a reallocation of capital across countries that exacerbates world inequality in both income and welfare. The intuition for this proposition follows from two results.

First, with unbundling of production, countries sort into the production of an endogenous set of intermediates. We show that highly productive countries have a comparative advantage in capital-intensive intermediates since labour is relatively more expensive in these countries and, thus, they specialise and export these intermediates. We provide empirical evidence consistent with this prediction.

Second, the aggregate demand for capital depends on the intermediates that each country produces. Countries that specialise in capital-intensive intermediates are going to import (and accumulate) more capital. This empirical prediction is consistent with the findings of Jin (2012).

These two results imply that high-productivity countries are going to increase their capital stock (via capital imports and accumulation) and, ultimately, their real wages (through the complementarity between capital and labour) and consumption.

One important factor behind the increase in trade in intermediates is that southern countries (or developing countries) have joined the global supply chain (for example, Baldwin 2012). The emergence of global supply chains can be illustrated by the location of the main suppliers of Apple in 2019. Its top-200 list includes firms from emerging and developing countries like Brazil, China, India, Korea, Malaysia, Mexico, Philippines, Singapore, Taiwan, Thailand, or Vietnam.1

When countries trade in intermediates, the relative demand for and redistribution of factors change. In a related paper (Basco and Mestieri 2019b), we show that unbundling of production increases within-country inequality, as measured for example by the Theil index. The increase in inequality is U-shaped in the aggregate productivity level of the country.2 The intuition is that the more (less) productive countries specialise in capital-intensive intermediates, accumulate more (less) capital and end-up with a larger (smaller) share of capital income in the new steady state. This implies that the largest increases in within-country inequality will be in countries with very high (or low) productivity because they experience the largest changes in capital. We provide suggestive evidence consistent with this result. This result is also consistent with the negative relationship between aggregate productivity and the labour share, which we document in Basco and Mestieri (2019a). Thus, the model provides a rationale for how unbundling of production generates within-country inequality and decreases the labour share in developed countries.

There exists a general consensus among economists that globalisation is good at the world level. However, the increasing discontent with globalisation in developed countries has forced economists to better understand the mechanisms through which it affects the distribution of income between and within countries. In this article, we have discussed that in the most developed (productive) economies, the new globalisation is good at the country level but it generates a redistribution of income towards capital. Thus, the optimal policy for these countries does not seem to be to put the brakes on the emergence of global supply chains but to better redistribute income within the country. Finally, it is worth mentioning that since the new globalisation amplifies competition among countries, the returns to productivity enhancing policies (like education or infrastructure) have increased.