It is surprising to note that labour intensity in the organised manufacturing sector in India, particularly in industries with greater labour requirements, has shown a sustained decline over the past three decades. This column finds that the key explanation is trade reforms that targeted capital goods and brought their prices down over time. This inadvertently incentivised firms to invest in machines and employ fewer workers

India’s disappointing performance in creating jobs in the organised manufacturing sector1 is one of the most compelling and least understood aspects of India’s post-reform economic development. Given the large numbers of surplus labour in the low-productivity agriculture sector in India, the expectation was that the 1991 economic reforms and the removal (at least in part) of existing distortions in factor and capital markets (such as the industrial licensing system and interest rate controls), would lead to a shift in the structure of production towards labour-intensive sectors and an increase in labour-intensity across the board in Indian manufacturing. 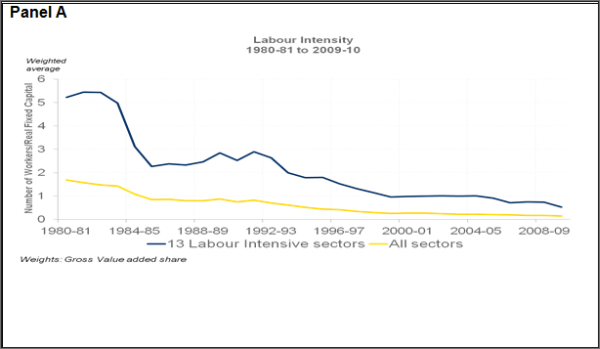 What explains the sustained decrease in labour intensity in the labour intensive-sectors over 30 years in organised Indian manufacturing? There are two standard explanations for the weak performance of labour-intensive sectors in India. The first explanation highlights the stringent nature of labour laws in India. A second explanation highlights a range of supply-side factors, such as infrastructural bottlenecks, poor skills and low literacy rates among unskilled workers in India as possible reasons for firms substituting labour with capital. With respect to the first explanation, several papers have shown that stringent employment protection legislation (for organised sector workers) – among the most protective in the world – has reduced the incentive of firms, especially those in the purview of employment protection legislation, to hire workers on permanent contracts. It has pushed them towards more capital-intensive modes of production, than warranted by existing costs of labour relative to capital. The first explanation may be able to explain the level of labour intensity, and why Indian firms tend to use less labour per unit of capital than firms in other countries at similar level of economic development. However, to explain decreasing labour intensity over time, one would need labour restrictions to become tighter over time. This has not happened, with an absence of pro-worker labour legislations for much of the 1990s and 2000s in most Indian states. On the contrary, Indian firms are increasingly getting around employment protection legislation by using contract workers in place of permanent workers (Saha, Sen and Maiti 2013).

The second explanation may be able to explain why labour-intensive manufacturing sectors in India have not been able to compete effectively against similar sectors in other countries (such as garments in Bangladesh). But the lack of adequate infrastructure and skills in the workforce cannot be an explanation for the sustained decline in labour intensity that we have observed across all sectors in Indian manufacturing.

Figure 2. The wage/rental price of capital ratio (w/r) for organised manufacturing in India 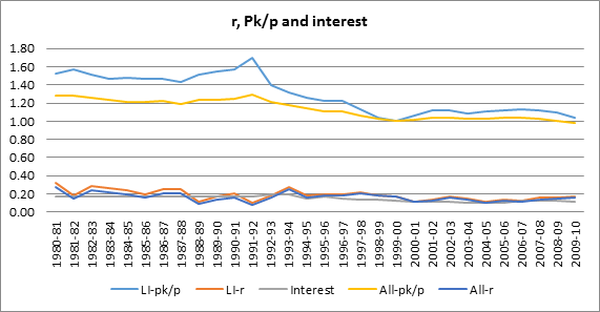 Liberalisation of trade regime with respect to capital goods

While both the increase in real wages and the fall in the rental price of capital has led to an increase in the wage to rental price of capital ratio, real wage growth during the 1990s and 2000s has not been excessive, with declining bargaining power of trade unions as firms gradually employed contract workers. In fact, during this period, wage share of income fell continuously, reflecting the decreasing bargaining power of organised workers. So the real culprit for the rise in the wage to rental fall of capital ratio is the sharp decline in the relative price of capital goods, especially since the 1990s. What has been the reason for this decline? This has been mostly due to the significant liberalisation of the trade regime with respect to capital and intermediate goods since 1991. There was a sharp decline in import tariffs for a range of capital goods, and this decline was not simply due to the one off trade liberalisation that occurred in the early 1990s but was sustained all the way to the 2000s (Figure 5). 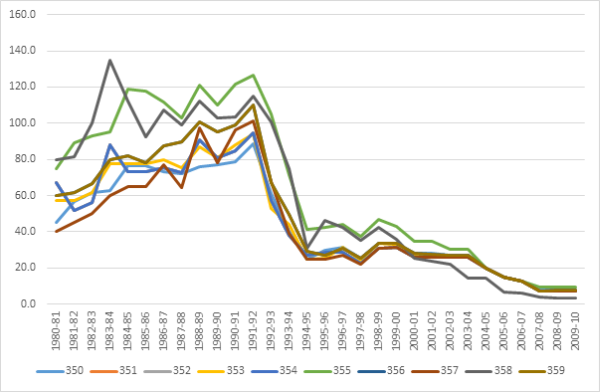 Thus, as protection for capital goods was removed slowly over time, their domestic prices fell relative to the overall price level. This led to a fall in the price of machines relative to the price of labour, and increasingly made firms in the organised sector substitute labour for machines. In sum, the key determinant of the declining labour intensity of labour-intensive industries in India, and across organised manufacturing, were trade reforms which targeted capital goods in particular, and brought their prices down over time. While this may have led to an increase in the rate of private fixed investment in machines, and consequently, economic growth (see Sen 2007), one inadvertent consequence of the trade reforms was to lessen the incentives of firms to employ workers, and to quicken the adoption of machines in their workplaces, across the board in organised Indian manufacturing.